I know I owe the three loyal readers of this blog a lot of stories, so let me just back up. To December, in fact. I think I left off on our Cambodia bike trip to the beach. That seems like a lifetime ago in some ways; but so many good stories to tell…

So, after our bike trip we took a long bus ride to Siem Reap and spent about five days tooling around Angkor Wat. I am not much of an archaeologist or a historian, so I will leave the blogging about the temples to others who can do the area much more justice, but suffice it to say that it is not overrated. I am still not sure about what this whole “Wonders of the World” thing is all about, but if Angkor Wat is not on that list, it should be. 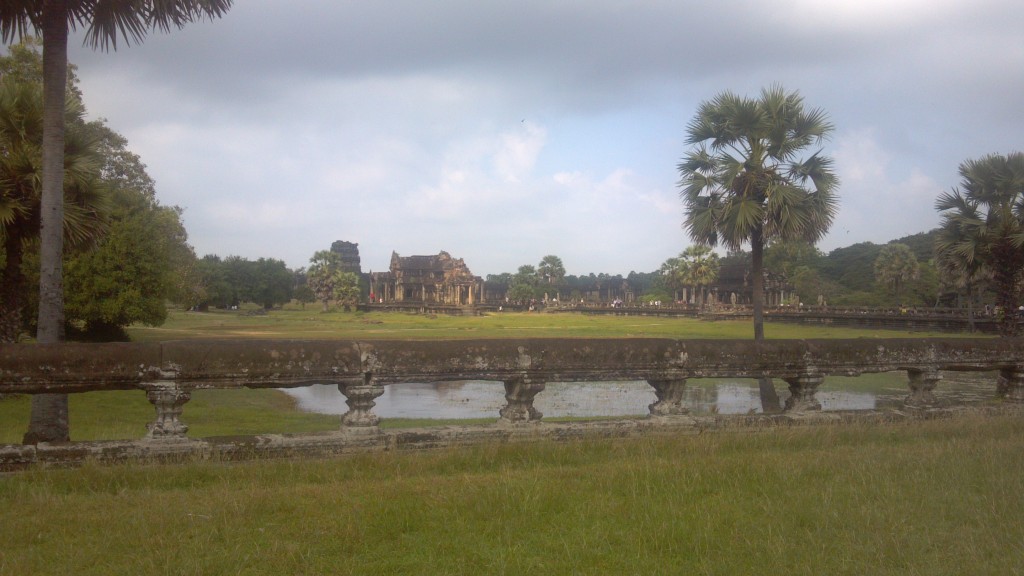 Angkor Wat in the morning.

That, and the typical rural Cambodian woman’s daily wardrobe of cotton pajamas. (How did they get so lucky?)

There are so many ways to explore the temples and old ruins around Angkor Wat, and I am pretty sure we tried most all of them. First off, we took a bike tour to see the “greatest hits” of the area, which benefited greatly from our guide, whose family is from the area and who had been a mini-monk himself – before he made the move into tourism at about age 18. 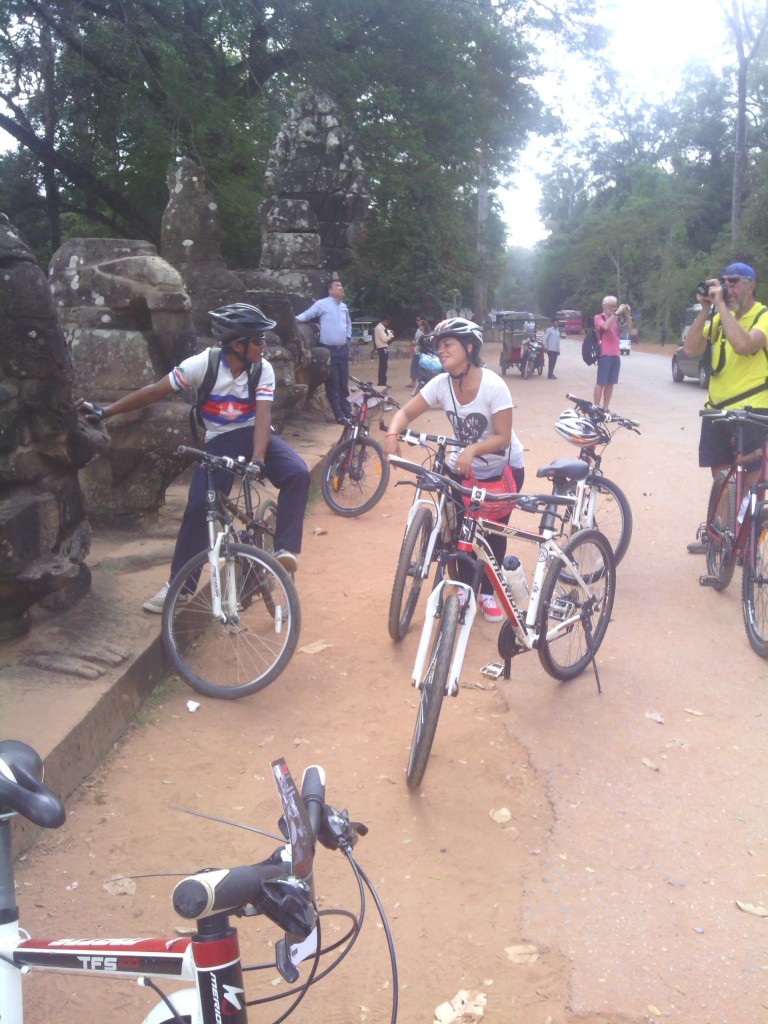 We ran the Angkor Wat half marathon , which took us 13 miles on the roads around the temples, and rented bikes one day and tooled on those clunkers around the 25-mile area that holds the greatest collection of ruins. 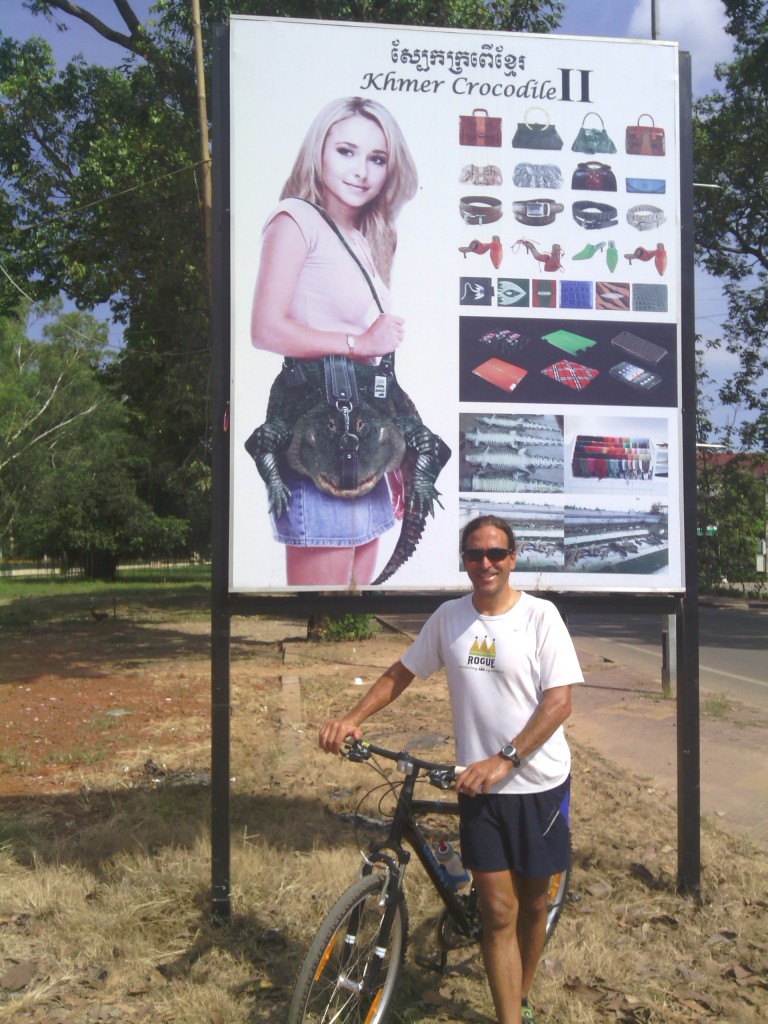 Another day we did a long run that traversed the top of the old walls of Angkor Thom, the old city in the area dating from over one thousand years, which measures 16 square kilometers (about 10 miles all the way around the walls, for those of you counting).

Running on the ancient walls of Angkor Thom

The walls are in various states of renovation, so the run required some (probably unsanctioned) scaling of ancient walls. 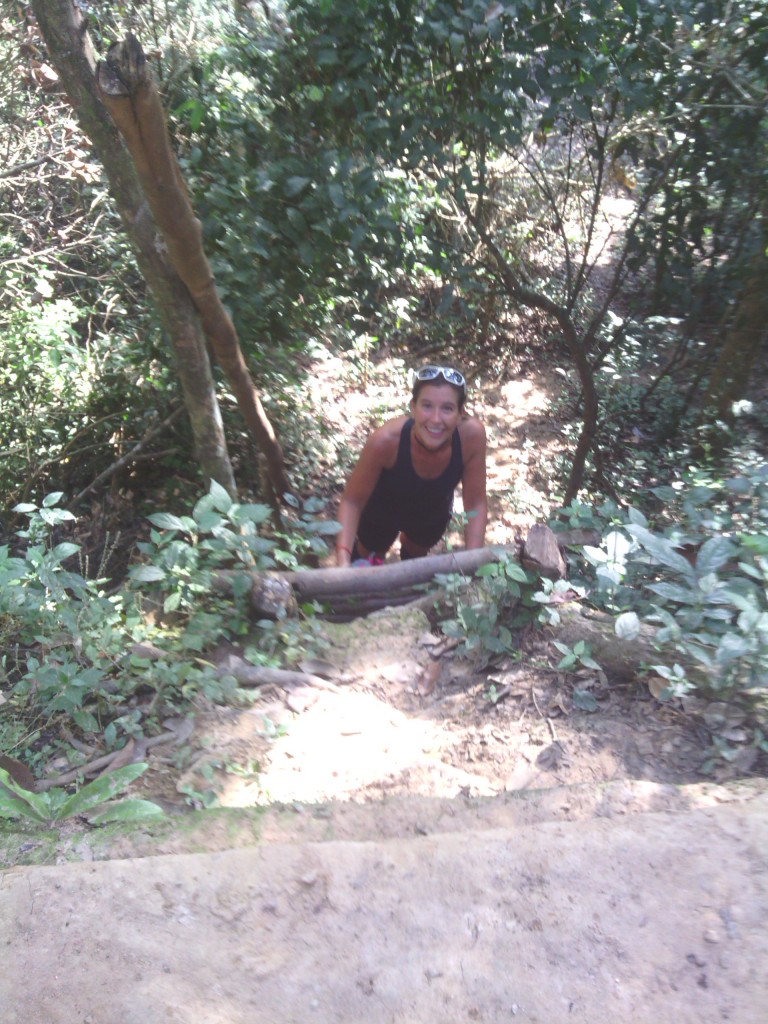 Creative summiting on bamboo ladders during our run around the walls of Angkor Thom.

Also some quizzical looks and thumbs up from renovation workers who are working on the restoration. And there were elephants in the road.

In Siem Reap, we were lucky enough to get to meet up with our friend Rob from Washington DC for a few days. Besides the fact that he was staying in a fancy hotel that had access to a nice swimming pool where we rested our tired legs post-race, it was great fun to catch up a friend for beers, dinners, and stories of home. And of course a good, old-fashioned flesh-eating fish session in the market at night. 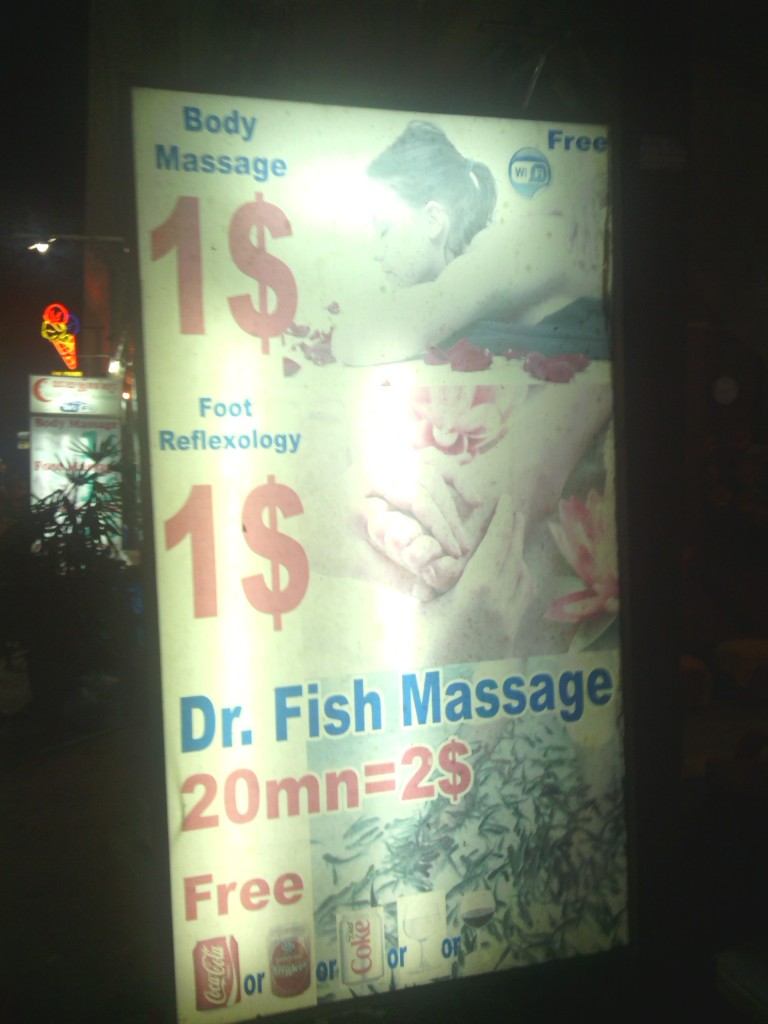 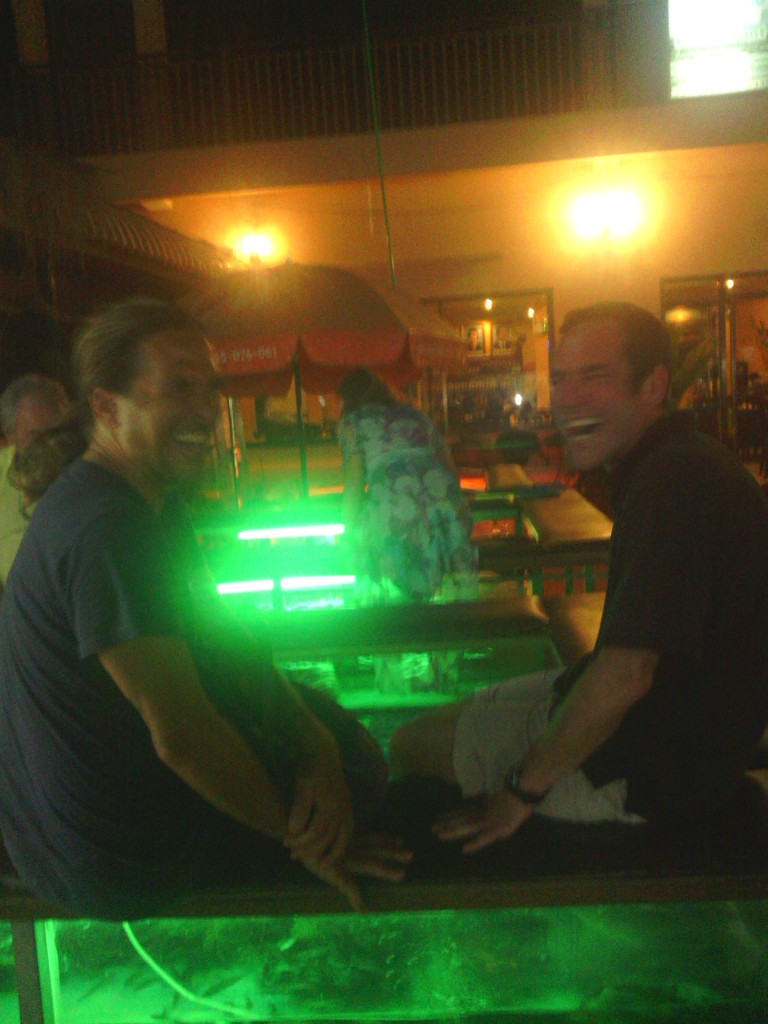 I wonder if it tickles.

From Siem Reap, Jimmy and I hopped a slow boat to Battambang, an old colonial town that was the last stronghold of the Khmer Rouge as they were being driven out of Cambodia. Battambang is in the far western part of Cambodia, and somewhat off the beaten tourist track. The boat ride to get there from Siem Reap took about 8 hours through narrow waterways and past a myriad of floating villages. You can see the facebook slideshow of that wacky trip here.

Battambang was a funny little town. It has a nice quay by the riverside, which is absolutely packed in the evening with dueling aerobics groups – the largest ones number in the hundreds. We stayed for a couple of days at a hotel called Chhaya, owned by one suspicious looking “Mr. Lee” (cue ominous music and foreshadowing for my next post).

One of the dueling aerobics classes, each led by a different Battambang hunky teacher, on the quay at sunset.

One of those days we went in search of the famous “Bamboo Train,” which seems to be Battambang’s starring – only? – tourist attraction. We rented some bikes from a Canadian who we discovered had followed his American girlfriend to Cambodia and has now set up a small bike shop in town. We spent the whole morning getting lost on the dusty roads around town and finally gave up mid-day in frustration. Not to be defeated though, we headed out again in the late afternoon and lucked into the right turn.

The Bamboo Train is a small bamboo platform (more like a mat than a platform) on top of two sets of wheels that run on the old railway. Each platform has a five-horsepower engine that gets revved when the “conductor” pulls a shoelace attached to the engine. Each platform is about big enough for four people to sit. There are no sides. When the engine is started, you hurtle down the track at about 30mph. When two bamboo cars meet one another going opposite directions, the one with fewer passengers has to hop off, disassemble the platform, and move it to the other side of the more crowded car. The journey takes you to a small village about half an hour from Battambang, where a man serves you drinks and reminds you to tip your driver. 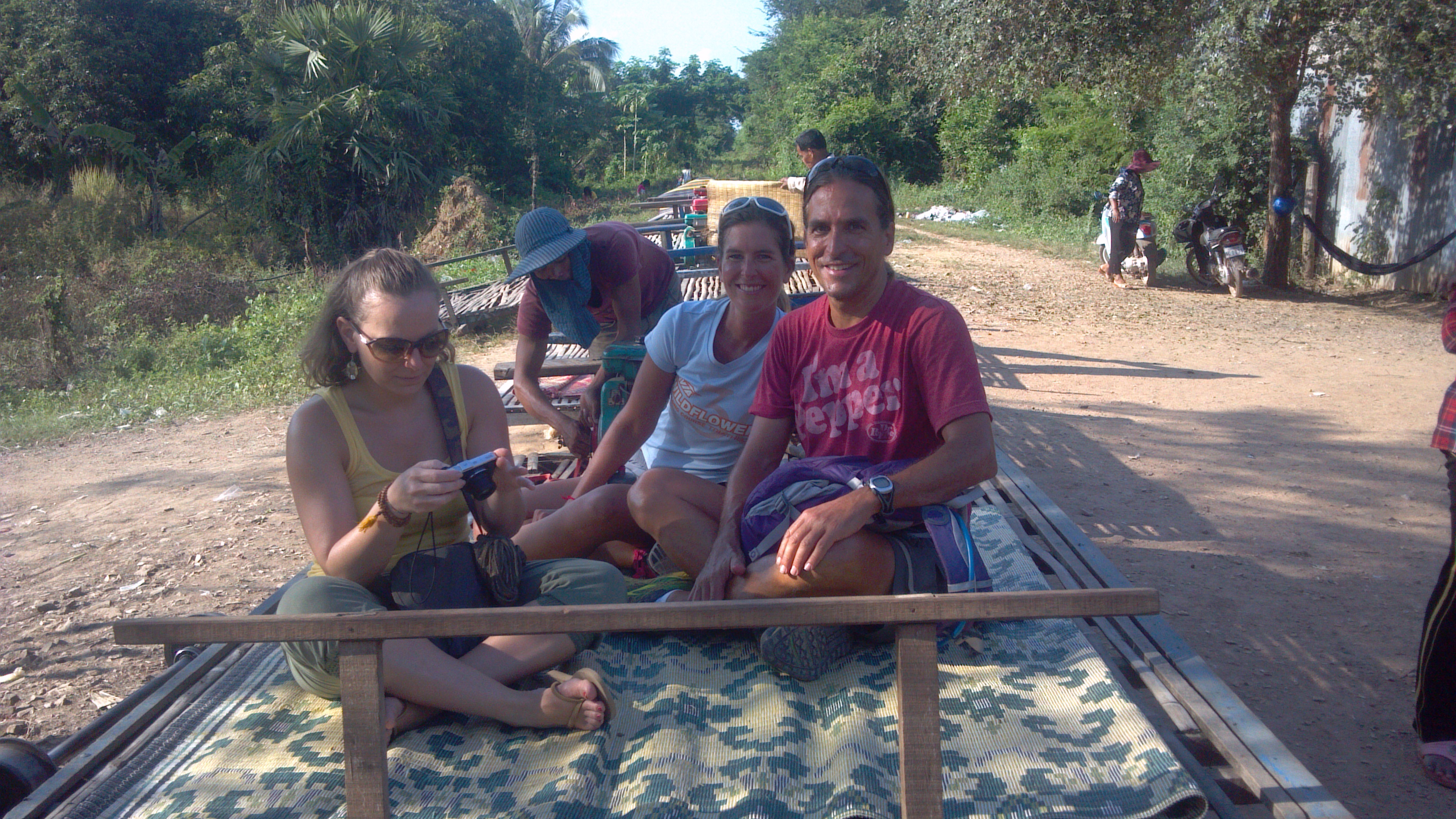 On the elusive Bamboo Train – at last!

Stay tuned for next time, when we make an ill-fated trip across the Cambodia/Thai border, and spend a long, long day with Lars. And Lars.