I woke and headed out in the darkness, around 4am. I knew I had several good passes to tackle today to meet my goal to Baker City – about 200 miles and 11,000 feet of climbing. Rolling out of town, the road was flat for a few miles then started slowly to climb up towards Ochoco Pass.

For the first time in the race, my legs were not feeling great. This was disappointing, but I knew it had to happen sometime. Also, for the first time since we had started, I was cold. I left the hotel wearing a new jersey and my arm warmers, but as I started to climb I found myself stopping to put on my down jacket and gloves.

Soon, however, the sun started to rise and I enjoyed another beautiful start to the day, with birds singing and light throwing color over the ponds and rock hillsides I was riding past. Occasionally a car would pass on the winding road. As they did, I wondered about the people inside: What was their story? Where were they going, so early in the morning over a mountain in Oregon? 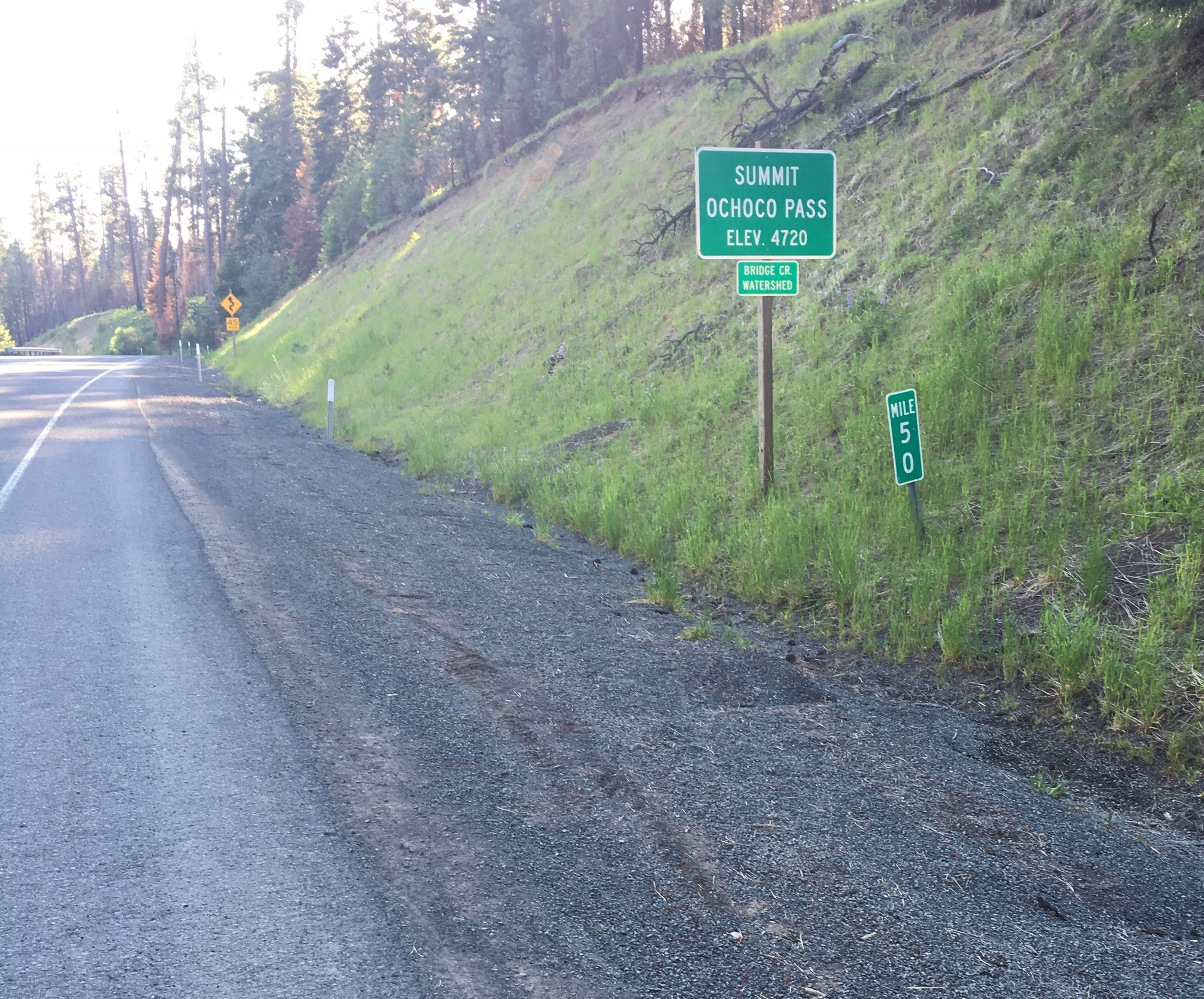 I summited Ochoco Pass and coasted about 15 miles downhill, trying to pedal to stay warm. The last three miles into the little, quirky town of Mitchell (pop. 120) were uphill, but I was still shivering when I arrived. Luckily, as I came into town I saw a coffee trailer on the left, Route 26 Espresso, next to an auto parts store. I ordered a coffee and a breakfast burrito, and ate in a little patch of sun that was hitting the side of the trailer. A couple of racers rode by together, and waved, but I couldn’t tell who they were. 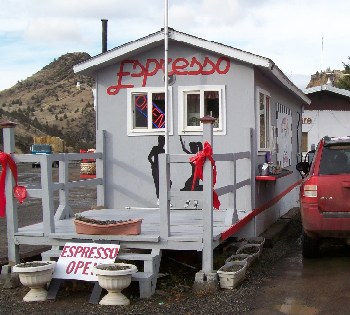 After shedding my layers and rigging up my coffee in its holster for the climb out of town, I got back on the bike. Not 200 meters down the road, I saw a water stop with a handwritten sign on a poster “Water Stop: Trans Am Racers.” The guy standing outside flagged me down to see if I needed anything. His name was Pat, a pastor who had recently converted part of a church into a hostel for cyclists on the TransAm trail, called the Spoke’n Hostel. He said several riders had stopped there for the night, and that two were currently inside sleeping. He briefed me on the next segment of the ride – Keyes Creek Pass, which he said was steep and long.

The pass was indeed steep, but the area around Mitchell is beautiful, so I didn’t mind the steepness all that much. The surrounding area is called the Painted Hills, and not without good reason. Still early in the morning, the light was bouncing off the rock and the layers of the clay desert rocks were changing from gold to pink to red as I climbed. During this climb, I started to employ a strategy that I would use for the rest of the race: on long passes with steep grades, I set a schedule of making a short stop every 20 minutes, just for 60-90 seconds, to look around, take a drink and get my heart rate down. I felt like this strategy kept me both physically within my limits and also allowed me to enjoy my surroundings. Because I was drinking coffee that morning, for the rest of the race I thought of these stops as “coffee breaks.”

As I was taking a coffee break, one of the Trans Am pairs, Italians Michaela and Stefano, came by – or at least Stefano did. At the top he stopped to wait for Michaela, who was still climbing, and said a friendly hello as I passed. I assumed I would see them again shortly.

The next 60 miles were mostly downhill or flat, and I loved it. This was the first real chance I had since the start of the race to get in my aerobars and just crank out steady miles while enjoying the scenery. At some point during that stretch before arriving in the town of John Day, I listened to an interview with Diana Nyad about her record-breaking swim from Cuba to Florida. During the interview, she told the host that one of her motivations to complete the swim was fear: not of sharks or of pain, she said, but a terror of not doing the thing she had set out to do.

At that time, somewhere in the fossil beds between Dayville and John Day, I mulled over this idea with skepticism. Where was the satisfaction, I wondered, in doing something out of the fear that you wouldn’t accomplish it? Wasn’t that simply desperation, I wondered, and something that should be guarded against?  I should have recognized this as foreshadowing, though, because in the days to come, I would start to understand the power of those words. Some days, and some moments, the positive energy and proactive belief in myself to finish the race would wither away to nothing. And during those times, that “fear,” even the desperation maybe, of not reaching Yorktown would be the only thing strong enough to spur me back on my bike, and keep me moving forward.

But I wasn’t there yet. In Prairie City, a great local dot-watcher and his wife came out to chat with me over lunch and cheer me on. They told me that the next three passes before I reached Baker City were remote and largely without services, while I ate a huge basket of fries in the local diner.

Three final passes of the day.

Leaving the small town of 900 people, it felt like I was in the middle of nowhere. Halfway up the first pass, then, I was startled by the distinct “whoosh, whoosh, whoosh” sound of a full disc cycling wheel behind me. Immediately, a cyclist on a full time-trial bike pulled up beside me, and I couldn’t help laughing at how out of context he seemed in that place. The cyclist’s name was Mike – he was a podiatrist and triathlete who lived in Baker City but “commuted” the 80 miles each way to work in John Day once a week. Mike and I chatted all the way up the first pass, until he decided I was too slow for his training ride. He left me with more notes on water sources over the next 60 miles and headed off into the distance.

It was during this next stretch, riding alone over those next two passes, that I remember the nagging realization of emerging saddle sores creeping into my consciousness. Despite my best efforts at finding good bike shorts and regularly using chamois cream, I was beginning to get the hint that blisters were forming on both of my inner thighs, just where they met the saddle. Knowing that this affliction has derailed many bike racers better than myself, I resolved to figure out how to deal with the issue as soon as possible.

Of course, I had been resolving a lot of things by that point. I had also resolved to never get dehydrated again, and yet as I descended the final pass into Baker City, I found myself desperate for water. The approach into Baker City is a beautiful one, along the Powder River, but I was so thirsty I could barely enjoy it. When I finally did arrive, I tackled the drink cooler and chugged a coke, a Gatorade, and water while standing in the parking lot.

It was about 9:30pm by now, and I was a bit irritated with myself. My body was starting to feel the nearly 600 miles over the previous three days, and I also felt like I was making some small mistakes that were starting to catch up with me. On the main street, I was relieved to find a bar with a grill inside, which wouldn’t close for another half hour. I ordered nachos, told the bartender that I would return, then went in search of a hotel.

When I came back to pick up my food, a stumbling drunk bearded man and his girlfriend were coming out of the bar as I was trying to enter. The guy was rambling about some perceive wrong that had been done to him, and when he locked eyes with me, he decided that I was the perpetrator. He lunged towards me in the doorway of the bar, yelling and spitting and threatening. Luckily, the bartender jumped out from behind the bar and got between us, holding the guy back and pointing him down the street. This was very welcome, because I was in no shape for a throw-down.

Back at the hotel, I took a shower and looked at the map. The next day would be my first day without a firm plan on destination or distance, and I decided I wouldn’t make any decisions yet about my game plan. I called Jimmy to find out where he was, posted this photo, then went to sleep. 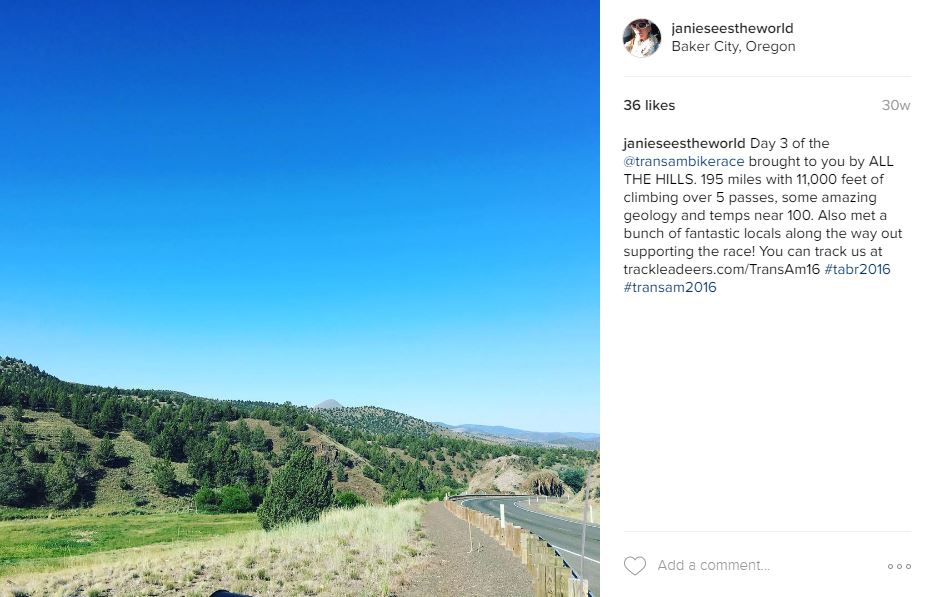