It wasn’t hard to get up and moving from bear country before the sun cracked the sky. Old Faithful sits at about 7300 feet elevation, and the air outside my sleeping bag was cold. I knew I still had about 70 miles and 3,000 feet of climbing to do before exiting Yellowstone and Grand Tetons – with the 17-mile Togowotee Pass just immediately afterwards –  so I was anxious to get moving. As I started to climb and the sun began to rise, I realized I was climbing above the fog. When the sun started to rise, the clouds looked like tiny lakes dotting the valley below. 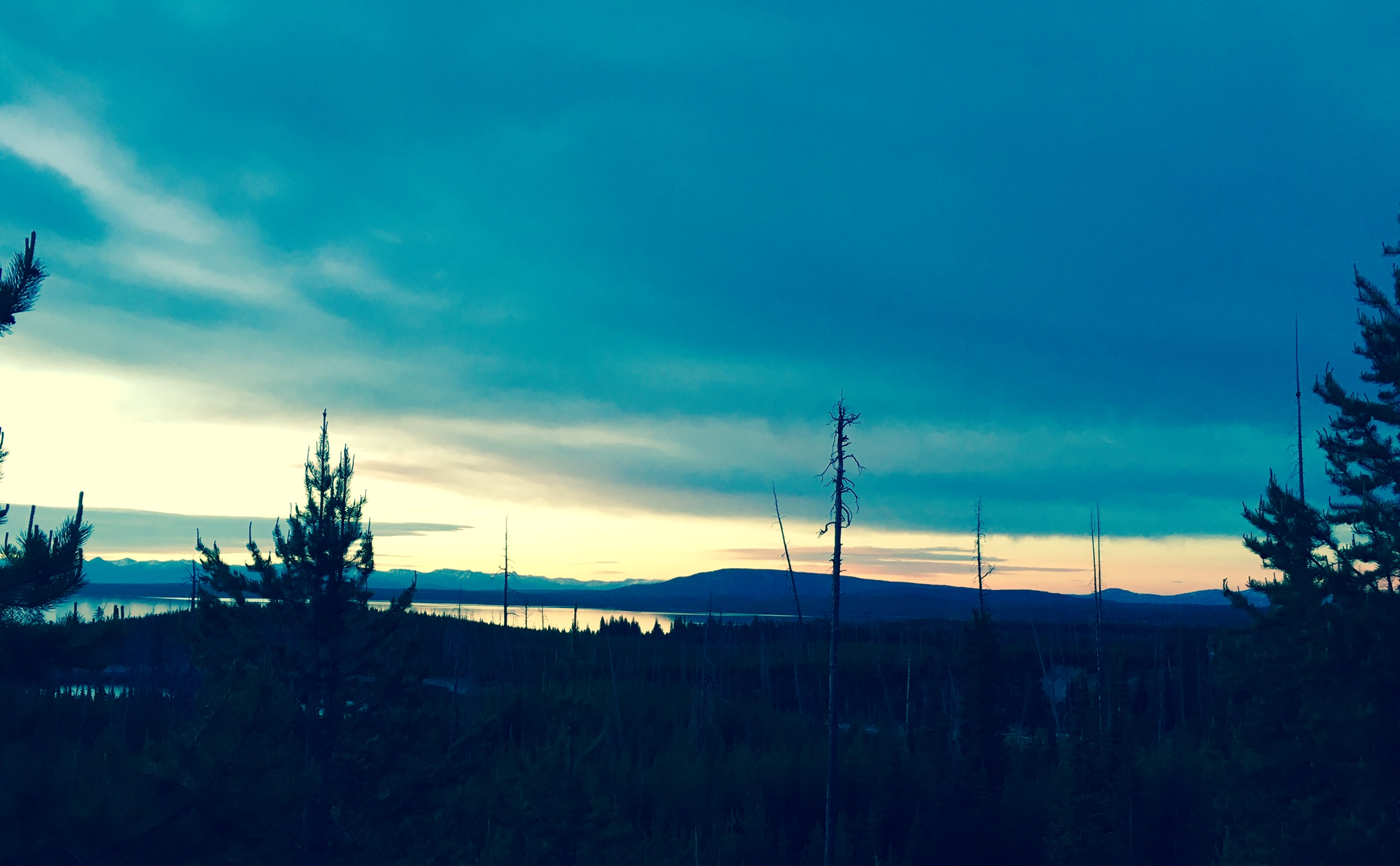 The climbing warmed me up, but the descents were still frigid, and I was shaking by the bottom of every descent. Around 6am I rolled into West Thumb campground, cold and famished. Fortunately, the restaurant in the campground was opening at 6:30, so I went in the restroom to treat my saddle sores and brush my teeth – a small luxury that somehow had started to feel like an adequate substitution for a full shower. While I brushed, though, I tried not to look in the mirror. The face that was staring back at me was not a pretty sight.

When done, I headed to the strangely upscale restaurant – marked by cut glass, cloth napkins and the sound of tinkling cutlery and hushed voices. I had to wait in line and was finally seated by a woman who was dressed nicely, smelled good, and tried hard not to look horrified by my bloodshot eyes and suspicious bike clothes. At the next table over, the family asked me about the race and marveled over the volume of food that I could eat. By the time I was finished with three heaping plates of pancakes, waffles, ham, chicken sausages, pastries, grits, hash browns, and toast, I had been off my bike for over an hour. It was hard to put down that hot coffee cup and stand up from the table, and I let out a loud sigh as I exited the restaurant back out into the cold. Before I rode off, I left the (thankfully unused) XL canister of bear spray outside the door for the next lucky customer. 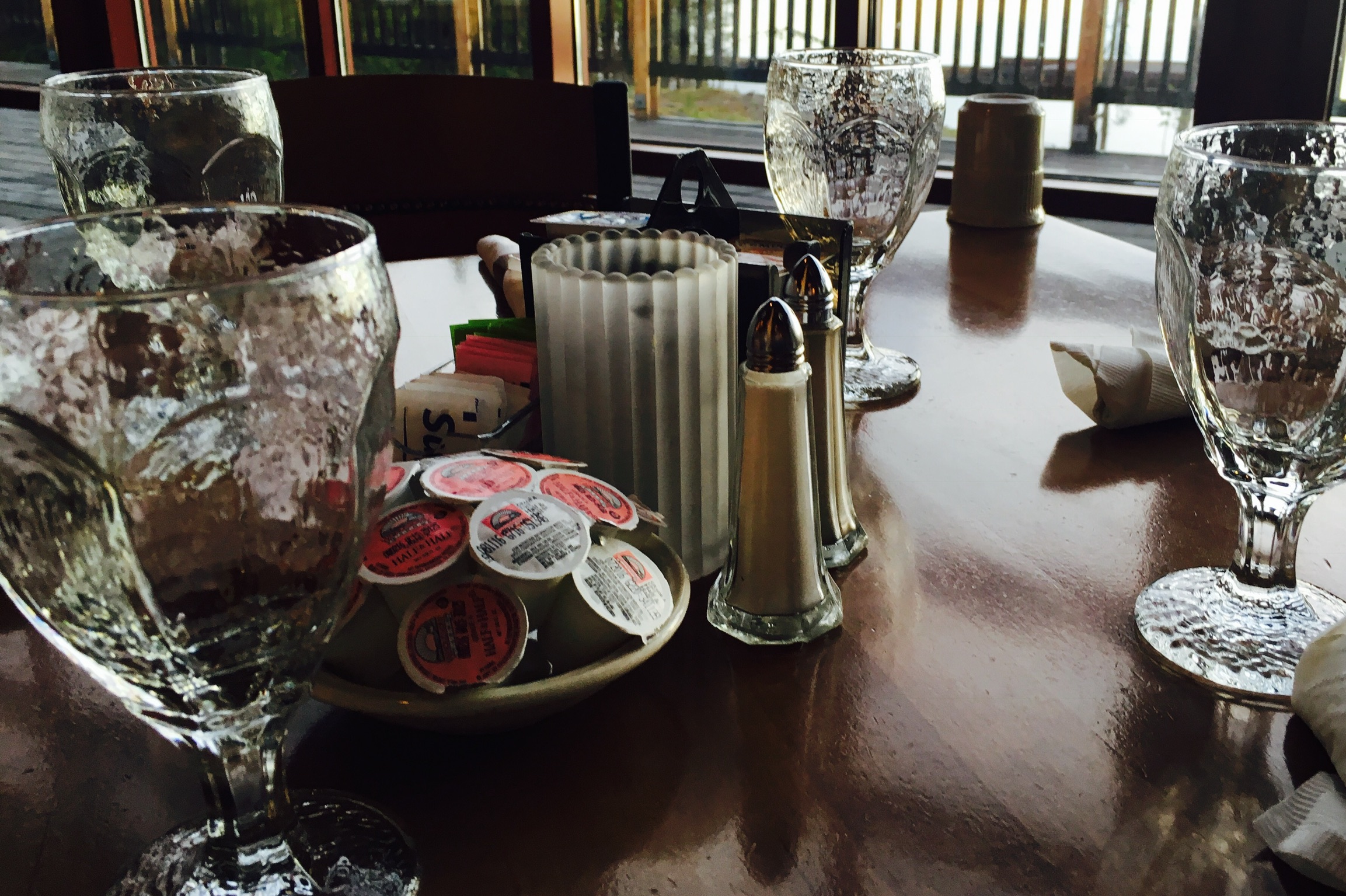 The meal and the rest restored my positive mood, and I carried on with energy through the gates of Yellowstone and into the small slice of the Grand Tetons that the Trans Am route covers. As I rode, I reflected on the last week. I now had three states behind me, I had covered over 25% of the 4,200-mile distance, and had the milestone of Yellowstone in my rear-view mirror. Despite what I felt had been a fairly cautious effort of riding within my limits and, for the most part, avoiding the day-to-day competition with other riders, I was still placed just outside the top ten in the race.

Over the previous couple of days, that realization had sparked my competitive instinct. I had kep track of the front of the race, especially the other women, and I knew that Sarah and Lael were both more than a day ahead of me. While that fact was hard to fathom in some way, it also provided inspiration. If they could do it, why couldn’t I try harder? If I was here, already pushing myself to spent 12+ hours on the bike each day and endanger my life by sleeping outside in bear country, shouldn’t I go all in? Shouldn’t I know – beyond a shadow of a doubt – that I had pushed myself to my limits? Shouldn’t I go home with no regrets?

Seven days in, in the midst of the Grand Tetons, I was finally ready to race. 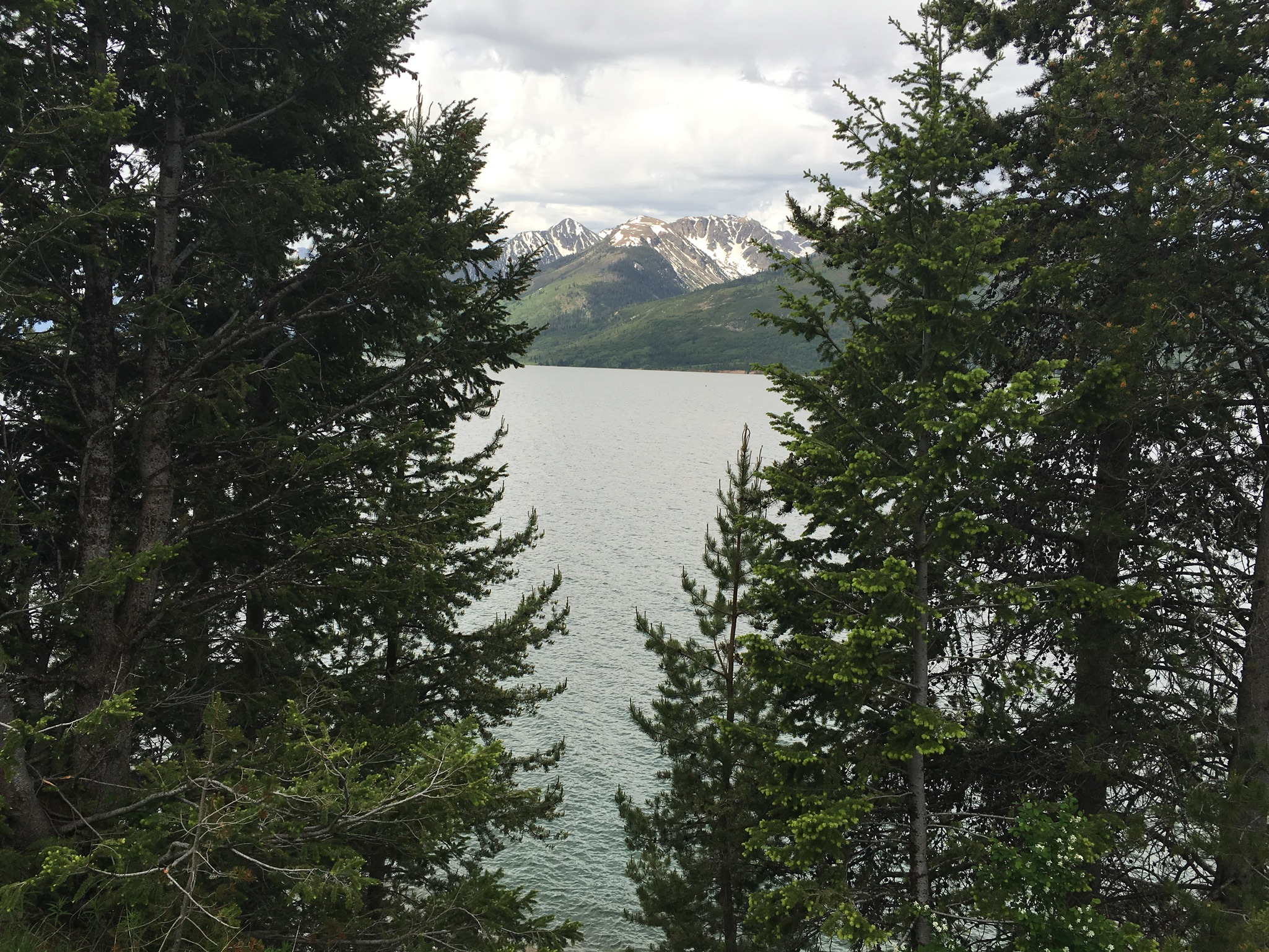 Of course, the impact of that decision in the moment was decidedly lacking in drama. I still had to slowly climb Togowotee Pass, I still had to take my “coffee breaks” – 60-90 second stops to regroup and rest – and I still had to spend 30 minutes in Dubois, on the other side of the pass, treating my saddle sores and charging my phone in the electrical outlet behind all the shopping carts in the grocery store.

In stark contrast to the morning hours in Yellowstone, the weather was hot and sweaty on the other side of the Continental Divide, which I had crossed at the top of the pass. Mercifully, I had a tailwind most of the afternoon. Unmercifully, that tailwind meant there was no direct breeze to mitigate the late afternoon sun. Grinding up a five-mile hill before Fort Washakie, I saw a mirage in front of me halfway up. It was orange, and it looked like another rider. I shook my head – I had been fooled by this hallucination before one afternoon while tired in Montana. I probably just needed a nap.

As I neared, though, I realized I wasn’t seeing things. There was indeed a rider there, Luke Kocher, who was standing next to his orange bike and greeted me with a friendly, “I was waiting for you!” It was heartening to see someone else, and good to chat with Luke as we both began riding again. We were still at altitude, and Luke didn’t have the same advantage of being acclimated, so he urged me on ahead. I was sure I would see him again. 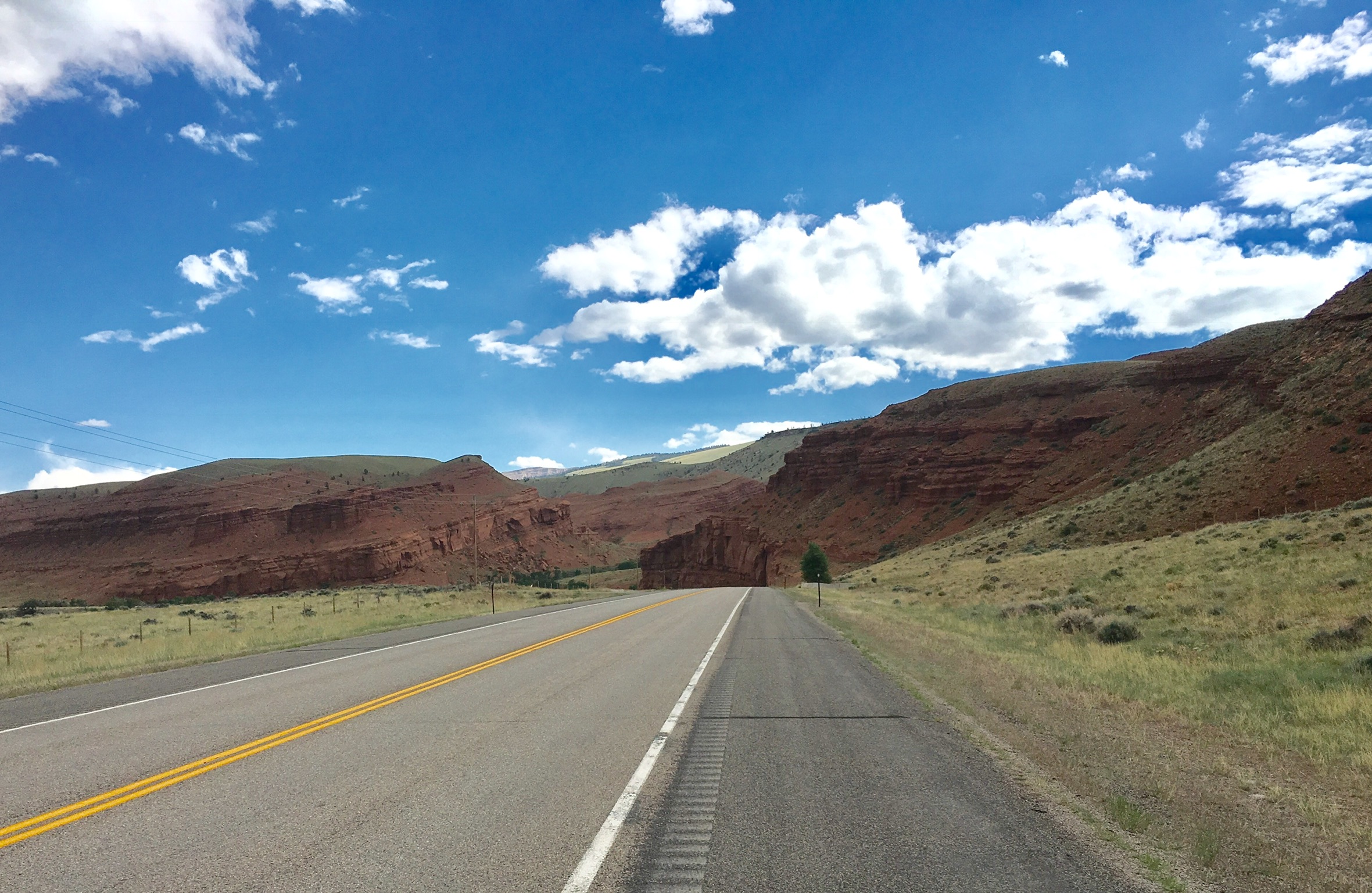 Coming into Fort Washakie, dot watchers had written graffiti on the roads in chalk: “Go Lael!” and “Go Sarah the Hammer!” I couldn’t help but feel a hint of wistfulness, a small stab of jealousy that their names, and not mine, were scrawled on that pavement. While I truly believed that every single person that entered the Trans Am, including myself, had made a statement by showing up at the start line, Lael and Sarah’s statements had been especially strong.

They earned it, I told myself as I watched my front wheel roll over their names. Now you earn it, too.

In Lander, night was falling as I clicked off 200 miles on the day. I stopped at McDonalds and ordered a Big Mac, fries, and a chocolate shake. While I was still waiting for my food, Luke rolled in. As we ate together, he told me about his job, his RAAM qualification success, and his personal transformation into an athlete in the preceding years. Luke’s personal resume is impressive, and his determination is contagious. I told him I would try to make the 40 miles to Sweetwater Station, and he said he would probably try to ride farther. We headed out into the darkness together, and as we got further from town our two lights were the only thing lighting up the black Wyoming night.

The ride to Sweetwater Station from Lander is a series of climbs that, in total, ascend about 2,000 feet with little descending – so travel was slow. For me, riding uphill in the dark is very disorienting. You can’t see the road ahead of you as a reference point, and there is little to take your mind off of however your body feels at that time. Luke had told me that night riding is his favorite type of riding, and I recall feeling very envious – if perplexed.

Around 11pm, I was riding alone, and began to get very sleepy on the dark, winding and climbing road. I managed to reach my friend Jill, who gave me an update on the front of the race and some encouraging words. As I rolled into Sweetwater Station after midnight, a rest stop emerged on the left side of the road. My plan had been to camp outside again, but when I tried the door to the rest stop, it was unlocked. Inside the heat was on, and the bathroom was clean. Bingo! I rolled out my sleeping bag on the floor of the handicapped accessible stall.

I had made 240 miles for the day, and was exhausted. Still, I checked TrackLeaders and saw that two riders were sleeping in a small town just 15 miles ahead of me. My mental switch had flipped to racing, so I set my alarm for 4am. I would try to get an early start to catch them.