I got started from about 3:30am out of Kremmling. This stretch of road had been under construction and muddy last year, but this year we were rewarded with new, beautiful pavement. I rode around Green Mountain reservoir as the sun came up. In 2016, I did this ride at sunset, which made me realize that almost a day and a half in front of where I had been last year. Despite the travails (or what seemed such at the time) of the past two days, I was feeling much better this morning. I was determined to solve the phone problem, and turn things around.

I had the phone number of the Verizon store in Canon City written on a scrap of paper I’d gotten from the Motel 8 in Kremmling. Canon City was about 150 miles from Kremmling, and I had found out the store was open until 4pm. I had decided this was plenty of time to get to the store, pop in and pick up a new phone, and be on my way. My plan had Ordway as tonight’s stop. Getting there would require a 250+ mile day, but I was determined to get back on track.

Riding the bike paths around Frisco and Breckenridge was as meandering and frustrating as always because of all the twists and turns, but it also felt like home. It was a Sunday, and disconcerting to see so many athletes out getting their daily workout – mountain bikers, runners, walkers, road cyclists. I caught up to an older guy on a gravel bike who was visiting from Texas and out for a ride to the market in Vail. He was going to buy some vegetables. Carrying on to Breckenridge, I rode through town and recognized so many places I knew well (I only live about 60 miles from Breckenridge). Those places all seemed so familiar, but at the same time even more strange.

I remember having another conflicting sensation during this stretch. I was waffling between feeling increasingly confident in what I was doing, and how I was racing, while simultaneously teetering on the edge of something going disastrously wrong. Powerful, yet very, very vulnerable. As it turned out, this was a sentiment that would stick with me for the rest of the race. I never fully identified the source of this feeling, but it was both empowering and terrifying. Maybe that was what it felt like to truly push your limits?

Or maybe it’s just what it feels like to be exhausted.

In Breckenridge, I ordered a really strong espresso shot and the girl working there let me use her cell phone. I remember noticing how clean it was, and commenting on it. My Achilles hurt so I stopped before the climb up Hoosier Pass to get some ibuprofen, and took four. 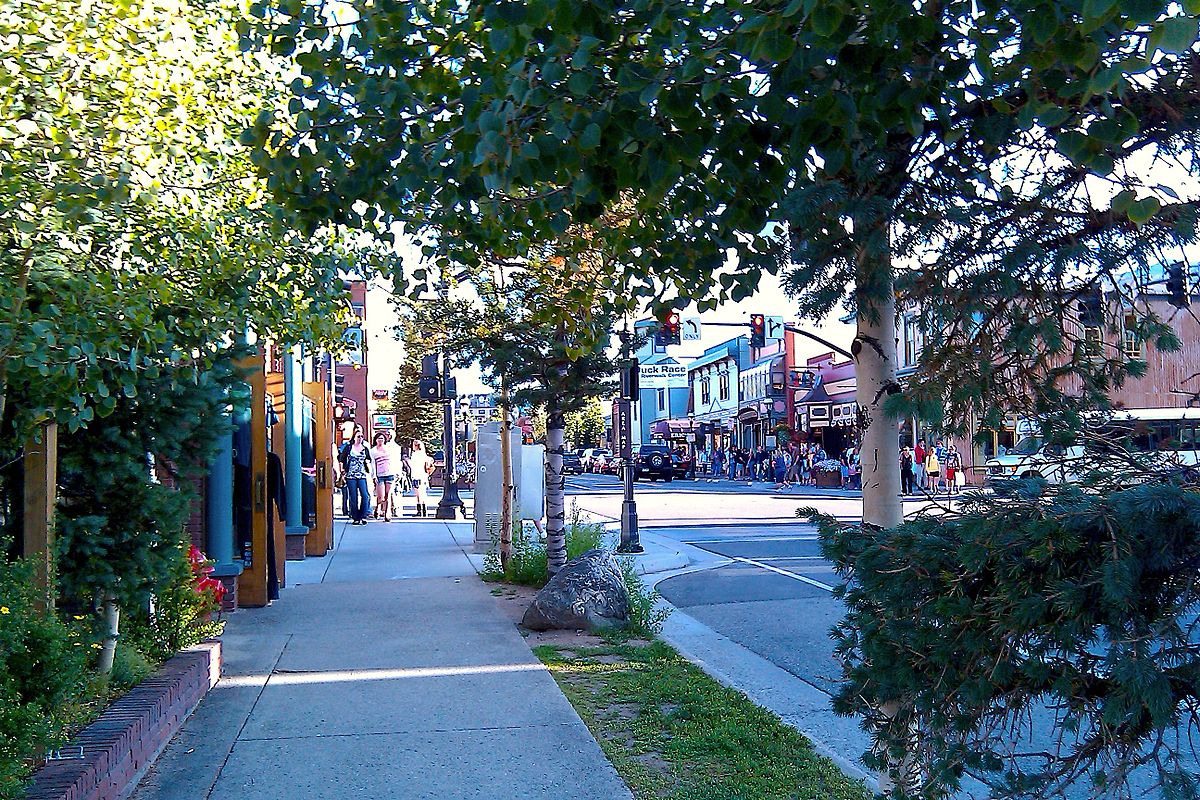 The wind was good and the climb up Hoosier was magic. Hoosier tops out at 11,000 feet and is the highest point on the Trans Am course. If you look at the profile, it appears that the route goes downhill from there. It doesn’t, but the top of the pass is nonetheless an important milestone that marks the end of the big mountains (and the beginning of an entire new set of tribulations). I wasn’t all that keen about getting out of these big, gentle giants; I was more worried about my shortcomings on the short, steep hills of the eastern US. In any case, the climb up Hoosier that day felt so easy that it made me giddy. A few dotwatchers called my name and took photos from their car. 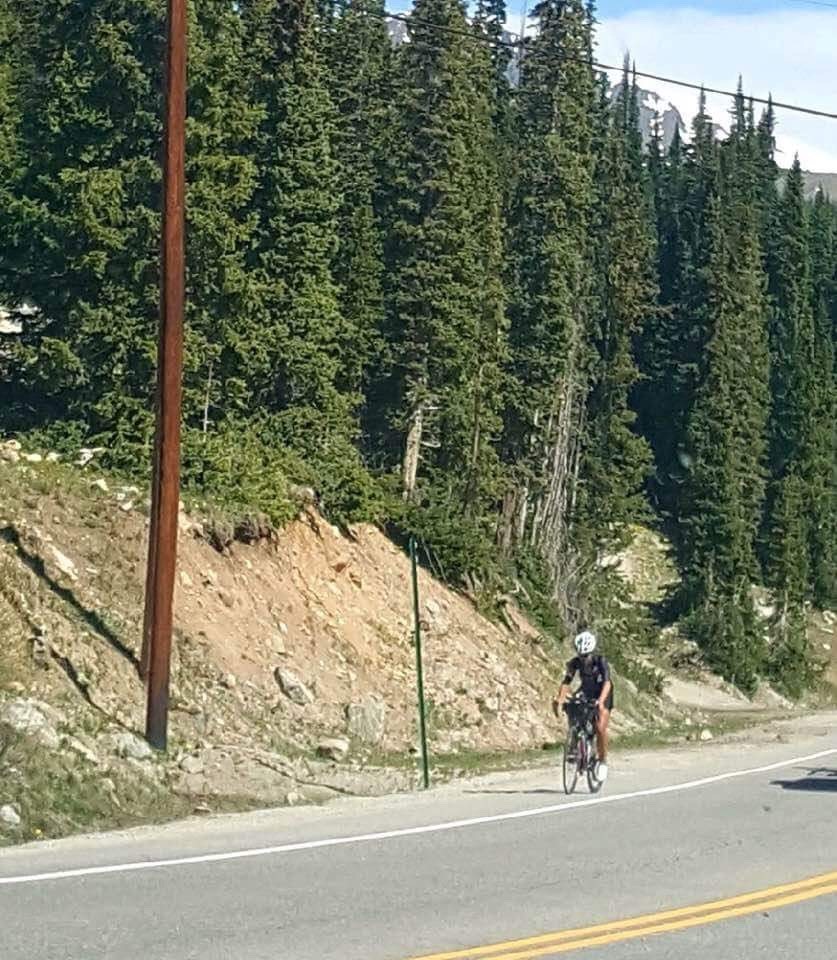 I bombed down the other side of the pass to the tiny town of Alma and stopped to call the Verizon store in Canon City. After what seemed to take forever, they agreed to have a new phone waiting for me at the store that afternoon. They reminded me the store closed at 4pm, and I said no problem. I had 80 miles to ride and it was only 10am.

Turning onto highway 9 from Fairplay at the bottom of Hoosier Pass felt like home. The traffic was terrible but the wind was favorable, and everything felt so familiar. Jimmy had told me the previous day that he would try to come out to see me (it was a busy week!), and sure enough, almost to Hartsel I saw him waiting on the side of the road in his bike kit. He was on the phone when I got there, and waved me on, so I carried on and he caught me about eight miles from Hartsel. He drafted my wheel all the way to Hartsel and we yelled back and forth to each other over the noise of traffic.

In Hartsel, for reasons that have never been entirely clear to me, Jimmy made me stop at our car and put on a life vest and hold a rafting paddle. He took photos. Then I went in the store for my last stop before Canon City. While I was there, a dotwatching couple from Colorado Springs pulled up on their bikes. When I came out, they introduced themselves and asked me if they could ride with me towards Canon City, and I said sure, no problem.

I gave Jimmy a hug goodbye – it had only been a handful of minutes and he was gone again. But there was no time to dwell on that; I was riding away from Hartsel and chatting with my new friends. They were from Colorado Springs and asked about training and the race. They told me they had ridden the same stretch with Jesse Carlson in 2015. I was having a great time; it felt like a casual weekend ride.

At some point I asked the time and it was already 2pm. We were still more than 40 miles from Canon City, and the Verizon store that closed at 4pm. I started to panic, and decided that I had no choice except to do everything I could to try to make it. That meant riding 20+ mph for the next two hours – and it was day nine of the TransAm Bike Race. A lot of those 40 miles were downhill, but I knew that there were also plenty of hills thrown in, and that to try for it was going to hurt.

But once I decided to go for it, my brain went into race mode. I got down in my drops and started to hammer.  I was riding harder than I had during the entire race. Focus, focus, focus. Push, push. Would it be possible to bonk, I remember wondering briefly, at this point in the race? If my legs were toast after this, I decided, it was all Verizon’s fault.

The next two hours of riding hurt – a lot. But at the same time, I was surprised how hard I could ride. It took incredible concentration, but I could still muster a heavy effort with extreme focus. And that with 1,800 miles on my legs in the previous eight days. Just 10 miles from Canon City, I came around a corner and there was a giant sign blowing in the wind with my name. Then, as I got closer, a confetti canon went off! A confetti cannon – was I dreaming?! I couldn’t believe it. Several of my friends from Salida were there cheering. My life was now complete. 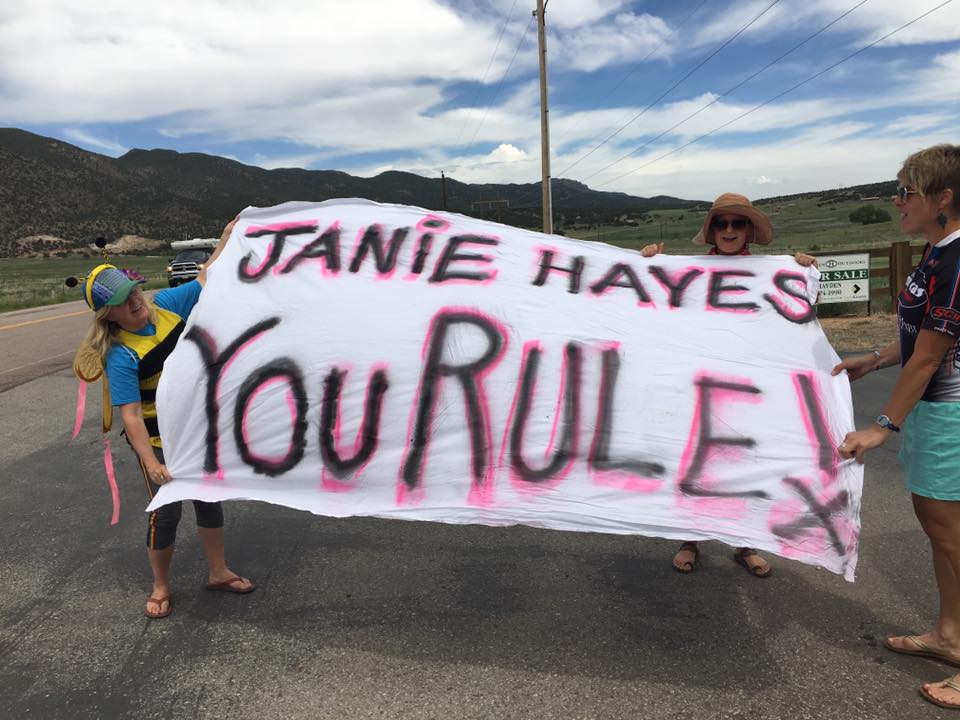 I pulled into the Verizon store at 3:59pm. Improbable, but true. I stopped to hug my friends – including my godsons – in the parking lot. They asked me if I my mouth was bleeding, but it was just residue from the chocolate cupcakes in my teeth.  There was so much I wanted to say to them, but there was so much to do. I had to stay focused. I went into the store and the employees asked me a series of bizarre, confusing questions: phone, case, adapters, packaging, insurance. I just shook my head and nodded at random. After about 45 minutes, I was out of Canon City.

It took me about 30 minutes to realize I hated my new phone – it was huge and didn’t fit in any of my bike bags. But I was finally able to call my mom on the way to Florence and talk to her about her foot, her surgery.

Out of Canon City and on to Pueblo, things were no longer fast, I was no longer hammering, the adrenaline had subsided. My legs were killing me. But it was quiet, and hot, and felt like the Trans Am Bike Race again. I thought about my brain and how plastic it was, while at the same time so rigid. On the one hand, it is amazing what my brain could handle at one time. On the other hand, I felt so easily overwhelmed by circumstance.

In Pueblo I rode through to the other side before I stopped – I was still fixated on making it to Ordway. The traffic was bad and the drivers were rude – one yelled at me to “get on the fucking sidewalk motherfucker!” No thank you, I said out loud.

It was hot here, and I felt like I was being prepped for a new reality, the next phase of the race. I stopped in at Walgreens and met Mike Grace, a Surly-riding dotwatcher who let me complain to him about my new phone and goof around for a while. I called the hotel in Ordway and negotiated with them that someone would stay up to wait for me. 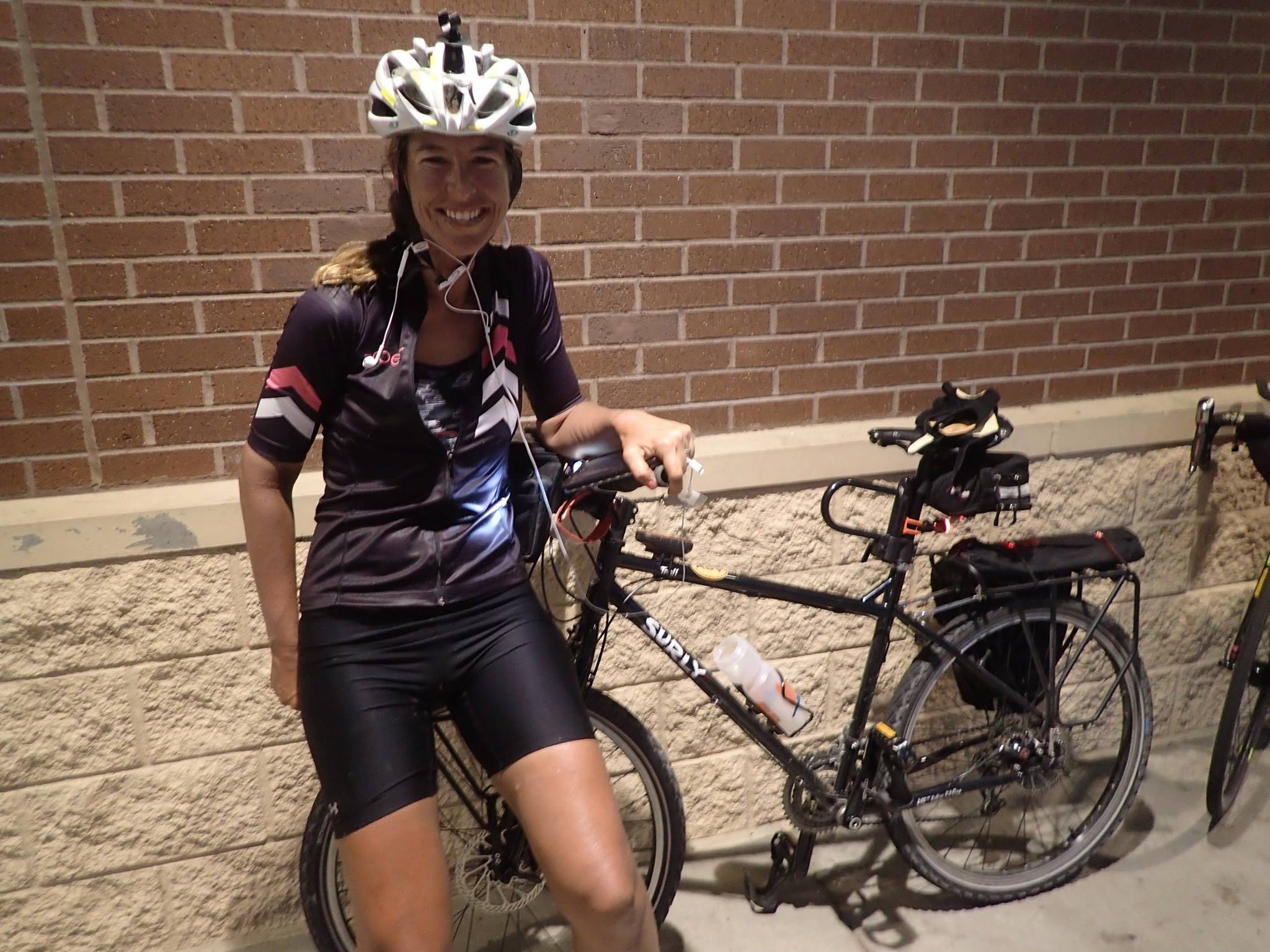 In Pueblo, I checked the race tracker and saw that Michael Wacker was not too far behind. I knew he was enthusiastic about reaching the flats and imagined he was likely motivated to start eating up the miles. For my part, I wanted to ride better in Kansas than last year, where I felt like I fell apart. At the moment, though, I didn’t know if I had it in me or not.

The 50 miles from Pueblo to Ordway seemed to take forever. The mood of the race environment had changed. It was quiet and dark. The lights of large prisons began appearing out of nowhere. The weight of the day began to pull on my eyelids. As I pulled into Ordway, I felt an immense sense of satisfaction. An Aussie dotwatcher who lives in town was out waiting for me, and I stopped to chat with her for a while – probably a bit too long but I was feeling chatty. 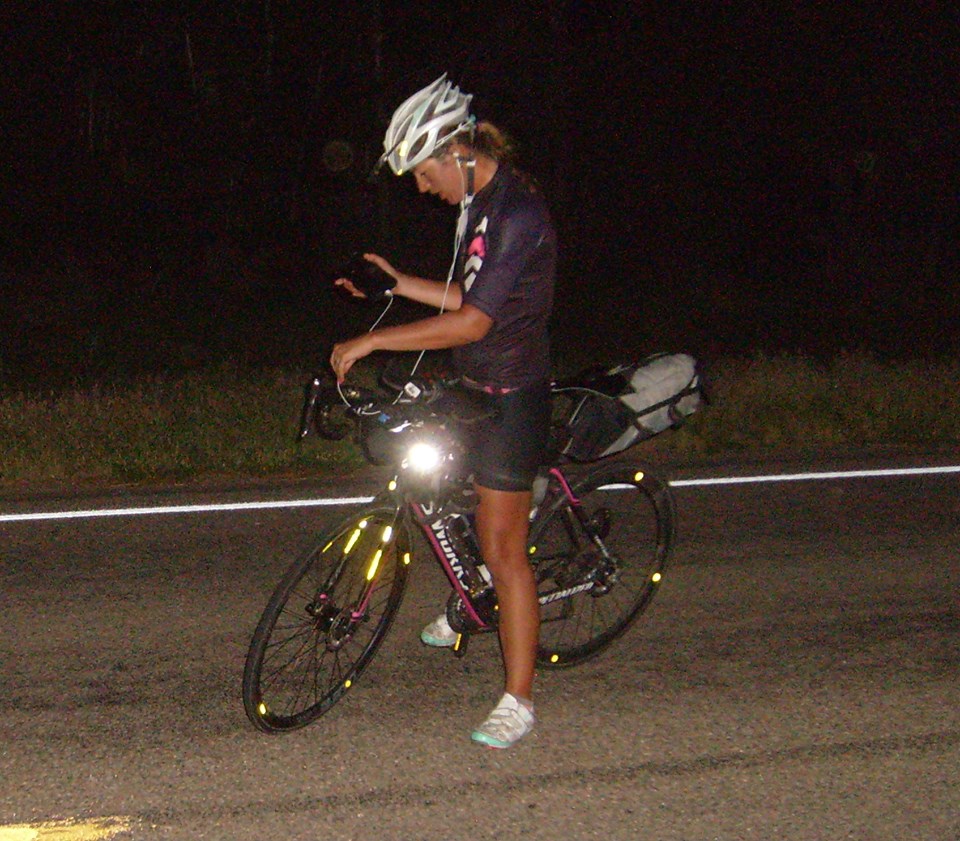 Rolling into Ordway at night.

Then I headed to the hotel where I slept last year. Like last year, the eccentric owner made me leave my bike outside and take my bags off before showing me my room upstairs. It was irritating, but somehow I felt an allegiance to tradition. Last year he had made me a porkchop. This year I asked again if he had any food and he slowly shuffled to the kitchen and emerged with a chicken breast and asparagus. The shower didn’t work, but I ate the food in bed and fell asleep.