I slept in all my clothes in the motel Charlottesville, which meant I had nothing to do when I rolled out of bed other than get on my bike. I rode out of town in the early morning dark, something I had done nearly every day for the past almost three weeks.

Rolling through the darkness, my light illuminating the lines on the road in front of me and shadows flickering in and out of that orb, felt familiar, yet different. It was the last day. My emotions felt heavy with the significance of the end. I had kept my mind from thinking about the finish for so long – and now suddenly, here it was almost in front of me.

With the end in sight, there was so much to reflect on: all that had happened (both planned and unplanned) and how far I had come (both physically and mentally). It was easy to rehearse the events themselves, and see how one thing had led to another. What was less easy was to see the impact those events had on me. My top goal from the outset had been to learn something new about myself. And while it seemed almost ridiculous that goal wouldn’t have been met with all that had transpired, it was – and still is – difficult to articulate exactly what it all meant. 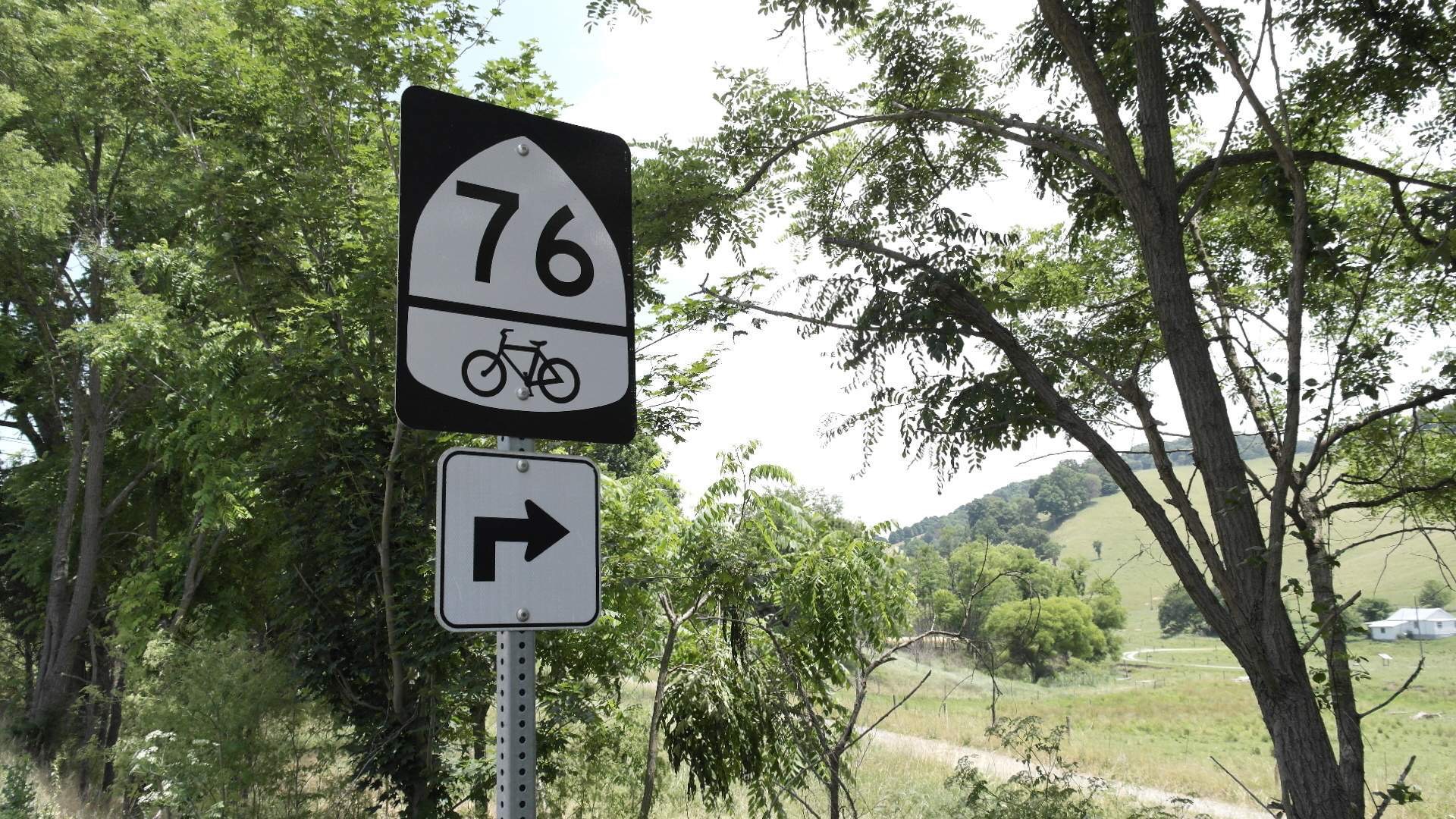 Who was I at the beginning? And how will I be different at the finish? I guess these are the existential questions that surround any life-changing adventure, and maybe clear answers don’t exist in words. The sun finally came up and I stopped at a convenience store and ate breakfast sandwiches in the parking lot near Lake Ana. My legs felt great, and I rode hard all the way to Ashland, where I stopped at the truck stop and a lady wanted to ask me “Where did you get such a great tan?” Like always, my response: Trust me, there are easier ways.

Evan and Donncha texted and said they were on the beach in Yorktown drinking beer. Jimmy was on his way from DC with my brother Danny and friend Catherine. Jon had finished the previous night, and all of this made me feel like I was missing a party that I really needed to be at.

There’s still 100 miles from Ashland to Yorktown, and it’s mostly flat and boring. I had done all of my contemplation and existential pondering by that point and, in the heat of the afternoon, I just wanted to get off of my bike already. I had been riding fast all day (quite a pedestrian pace, truly, but “fast” is a relative term on the 20th day of the Trans Am Bike Race). Getting to Jamestown, though, I was hungry and stopped into a small restaurant and bar.

This was maybe only the second restaurant (not counting Subway and McDonalds) I had been to in nearly 20 days on the road. I sat at the bar and ordered French fries and a giant piece of coconut cake. I thought about ordering a beer, then decided not to, and wondered hopefully whether someone would have one for me at the finish.

If you’re riding west to east, the grand-sounding Colonial Parkway hosts the last 20 miles of the route. If you’re unprepared, the bumpy, speed-sucking road surface can be an unexpected soul-crusher. When I read about this stretch of road after it shell-shocked me last year, I learned it was built as a “limited access highway with broad sweeping curves, set in a meticulously landscaped right-of-way devoid of commercial development,” which was “derived from 19th century romantic landscape theories.” Apparently, the theory of a romantic landscape was large pebbles in a bumpy surface that can smash a cyclist’s hands and other body parts to smithereens.

On the other hand, you also feel like you can do anything in the last 20 miles of the frickin’ Trans Am Bike Race. Halfway down the parkway and standing by his car, was my coach Greg Grandgeorge – once again making a heroic and unexpected appearance. Jimmy called when I was ten miles away to say there were people with coolers and lawn chairs waiting for me at the monument, which struck me as really funny that after all this time alone in the middle of nowhere, the finish might be a spectator sport.

I wasn’t sure what would happen to me at the finish, but I was pretty sure I was going to break down into tears. In fact, exiting the parkway and onto the boardwalk area I started to well up. Just as that happened, though, a movement to my right caught my eye. Three Segways pulled into the street next to me. It took me a moment to process the riders: Evan, Donncha (who had cut his race short in Kentucky and flown to the finish), along with a guide. (Apparently no one was trusting those two on Segways without supervision.) Having been on the edge of a full release of tears the moment before, I suddenly couldn’t stop laughing. 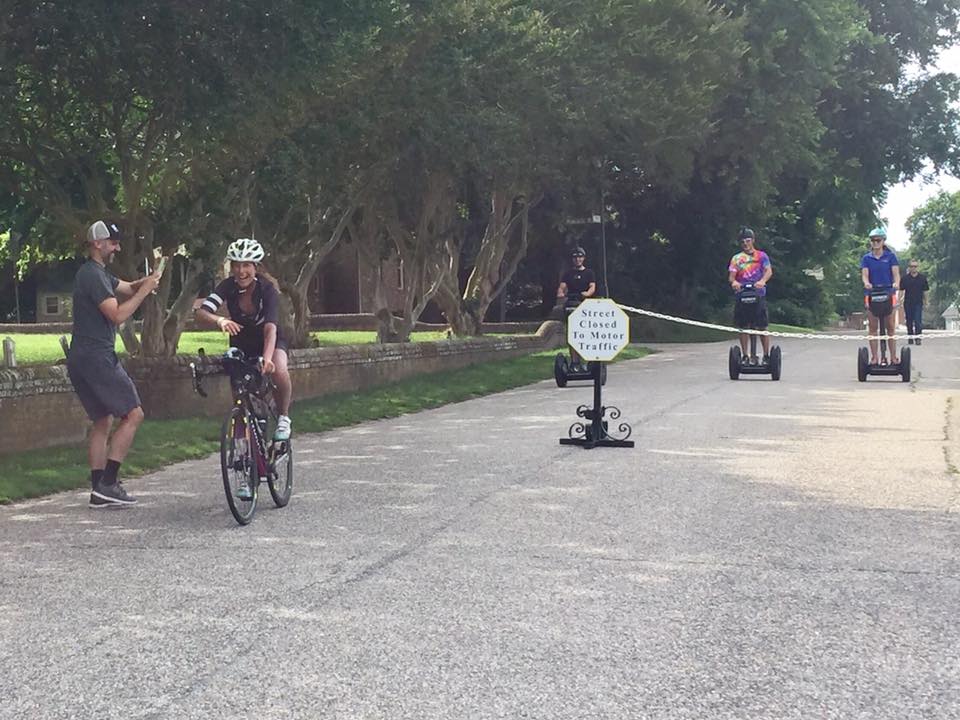 Segway escort to the finish. Photo: One of the amazing Lesters

There is a short steep hill up to the finish at the monument, and I had to race to keep Donncha and Evan from beating me up it. No way I was letting a pair of Segways nip me at the end! I made the turn, and there was my brother Danny, Catherine, Jimmy, Jon and the entire Lester clan, Greg, my brother in law Eddie and his wife Liza, my sister in law Anne – and indeed, some well wishers with coolers and lawn chairs. 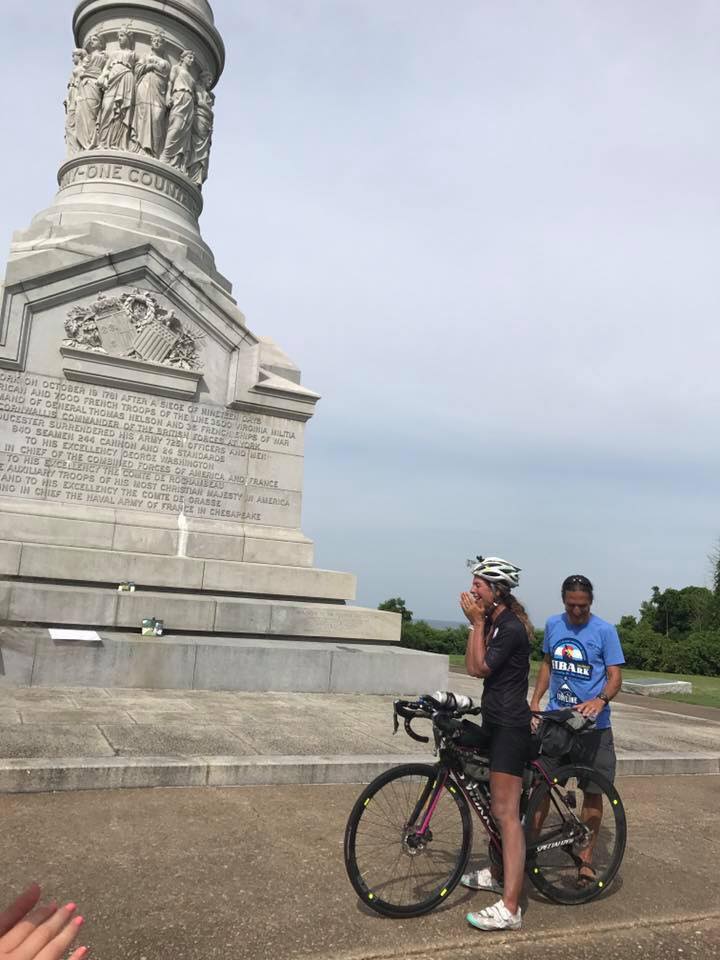 The finish at the monument felt both colossal and, at the same time, just like the end to a really long bike ride. I had a beer in one hand and some bubbly champagne drink in the other. There were stories, and laughter, and dog bite photos. Surrounded by friends and fellow racers, all of those dark moments that had taken me so deep and low over the last 19 days – the lonely stretches at night, the exhaustion and helplessness, the feelings of despair and fear, the dog bite – were simply funny stories in the light of day, anecdotes that would be stitched together in a story of one person’s bike ride across the country. A tribute to Eric had been set up on the steps, with a photo and candles. Having his presence there felt important, a reminder of the gravity of the decisions we make about how best to live our lives. 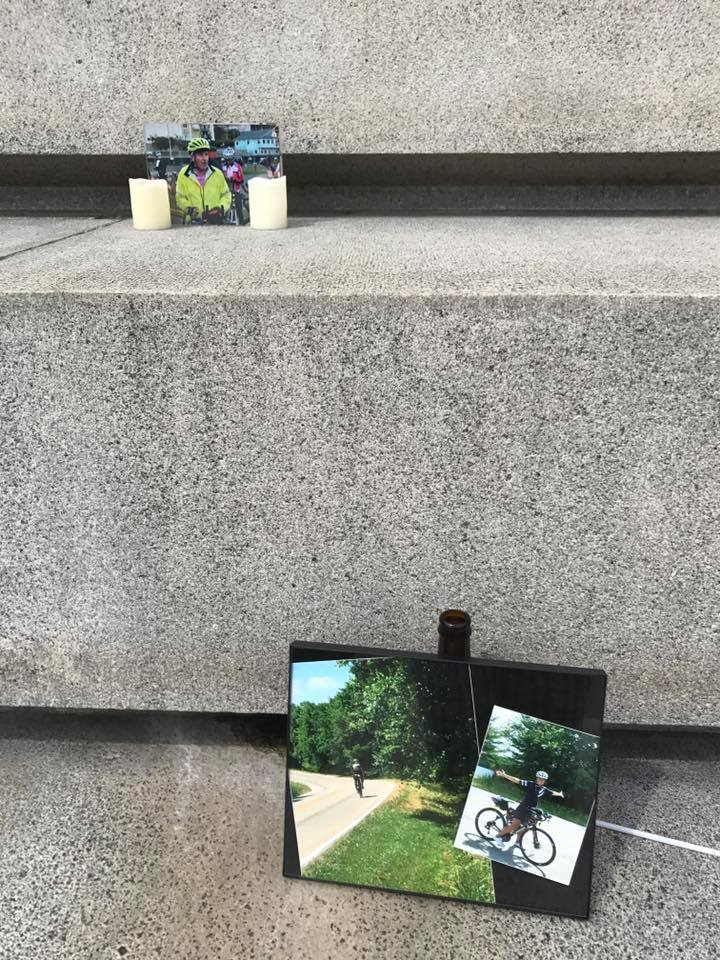 The memorial to Eric, and a gift from the Lesters that now sits in my bedroom.

There’s no prize at the end of the Trans Am Bike Race. No podium, no t-shirt. Even me saying that I was third place and the first female is really just sort of making things up that don’t exist. The Trans Am Bike Race is unsupported and individual. It is a personal experience in freedom, and in learning – about yourself, and about the world. And if that counts just as much to you as any prize, the Trans Am might be for you.

It’s also a little bit about bike riding. And while for me the racing was secondary to the overall experience, I was proud to have demonstrated that I could work hard, ride smart, and compete with riders that I admire. Pushing ourselves beyond our preconceived limits of what we can do is how we honor the short lives we have been given, and one way of doing that is to test ourselves against others who can set a higher bar than we would otherwise set for ourselves. In the Trans Am Bike Race, this means going faster, harder, smarter (and sometimes being a little bit luckier). But each of us has our own way of pushing the limits of who we are, of learning something new about ourselves, and in the end becoming someone different at the finish than we were at the start. Cyclist or not, each one of us has our own Trans Am Bike Race. 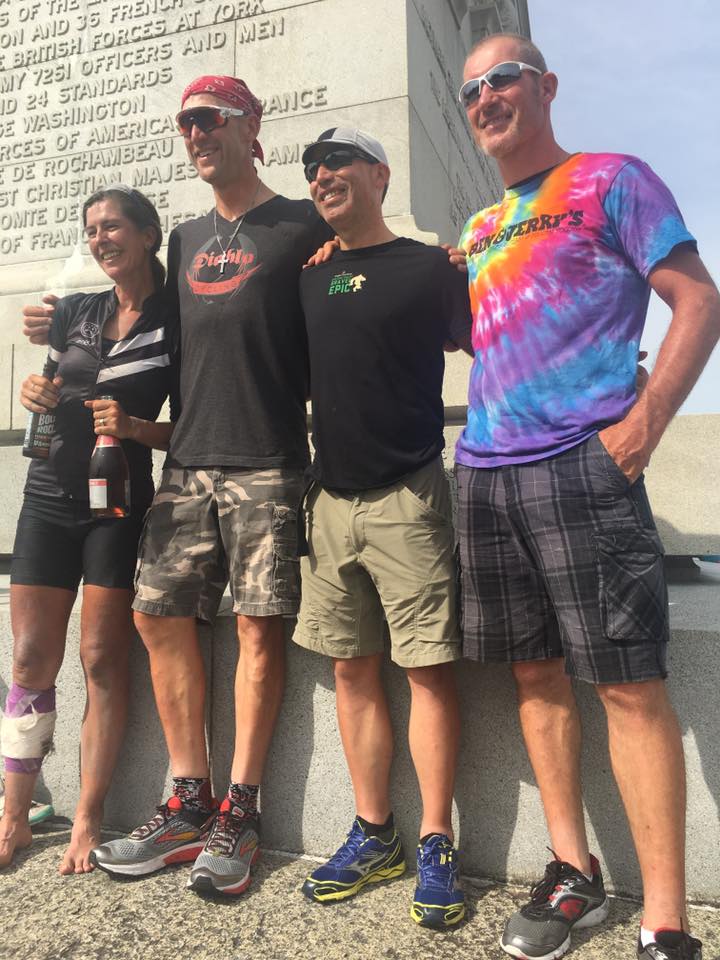 And while I have gone on about what an individual experience the whole thing was, standing there in that small crowd of people at the finish, the ironic reality hit me that I owed much of my personal experience to other people who had supported me, encouraged me, and guided me along the way. My story would have been much, much different, and certainly less rich, without all of them.

I know this isn’t the Oscars, but it is my blog. And since I have already gone and made quite the Ken Burns-ish autobiopic out of this, I hope you’ll indulge me with this list of thank-you’s to:

Thanks to everyone for reading. Even though there aren’t any prizes in the Trans Am Bike Race, if you read this far you deserve one.

Number of racers at monument on June 22 bit by the same pit bull: 3 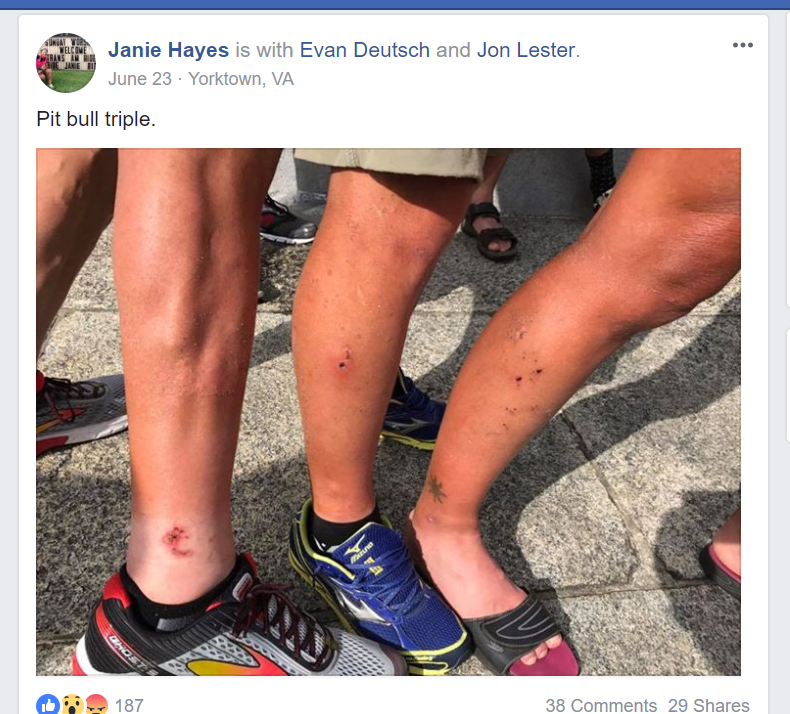