On Saturday, we took a mountain biking trip to Mount Batur. Mount Batur is an active volcano in the northeast part of the island. Before we hired a guide, we went back and forth about whether we should or not. Would it be worth it? Couldn’t we just do it on our own? In retrospect, that all seems laughable.

Although I like to think we can find stuff on our own, I don’t think there is any chance we could have figured out how to get to where we started this ride.  It was about an hour drive from where we are staying in Ubud, almost all of it uphill on roads with crazy motorcycle and scooter drivers passing cars and trucks on blind corners. We began our ride around the backside of the rim of the caldera that surrounds Mt. Batur.  Once we started we had about 2 km of riding on pavement, then single track and dusty jeep trail the rest of the ride. 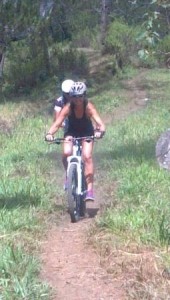 Most of the trails we rode were either steep uphill or steep downhill.  An occasional flat spot, but not too many of those.  It is the end of the dry season in Bali so the tracks are really dusty. Wayan, our guide, told us that the trail would be dusty in places so we should keep space between us, but after riding on this type of trail for a while I wasn’t ready for spots on the trail that had 6 inches or more of sand and fine dust. The first time we hit one of those spots I was right behind Wayan and I got totally enveloped in a cloud of brown dust. Most of the worst dust was on really steep downhills where it would hide the deep holes in the trail. But if you got off your bike you’d have to wade through the dust so it was better to stay on.

After a bit more uphill we ended up on a narrow ridge.  One side was big views of the volcano and the valley that it sits in, the other side was views of the north coast of Bali, and the long steep 5 km downhill to get there.  Mt. Batur volcano sits in the middle of a valley and we were up on the ridge left over from where the bigger volcano either collapsed or exploded.  Part of the valley is filled in by a bright green lake which we could see from here.  The trail we took goes along the ridge for a while then pretty much straight downhill into the valley. 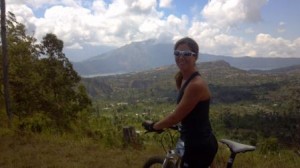 Gunug/Mount Batur and Lake Batur in the background.

After a fun and sometimes scary downhill mixed with the occasional steep (really steep) uphill, we came around a corner and found our picnic lunch already laid out for us.  Wayan said it usually takes a few hours to get from the place we started to the lunch stop, on the top of a hill above a quarry, but we made it in around an hour. It made for an early lunch, but gave us time to catch our breath before we went down ‘Lung Buster’ hill, which was a 1.7 km downhill at probably 20% grade on pavement or dirt covered in deep piles of dust and sand. Of course we tried to ride back up the hill once we made it to the bottom, but after 3 or 4 minutes even we were defeated.

Once we made it to the bottom of the valley we rode around through fields of tomatoes, pumpkins, lettuce, and even the occasional coffee bushes.  The trail was sometimes okay, but lots of it was deep sand and dust.  We would try to make it though the sandy stretches as best we could, but only our guide Wayan made it through most of them on the bike.   In the midst of all the fields we came past a big village temple.  There were three big gates facing the track we were riding on, each one had a pair of statues and a fancy painted door.   All the temple carvings and walls are made from rock from the volcano. 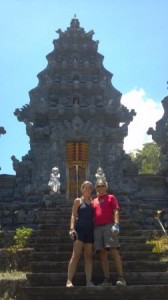 Dirty wanderers at the temple.

After circling Mt Batur volcano most of the ride, we ended our ride on this track that goes through the lava fields.  The volcanic rock looks fairly new and there are almost no plants growing in it, although there are a good number of small shrines like the one we are standing in front of.  We rode for about 5 km through the lava field on this track.  It started out seeming pretty easy, but after all the single track and the uphills and downhills the bumpy surface took it out of us.

We were covered in dirt by the time we got to our ride waiting for us near the lake.  Our shoes were filled with dust, and the rest of us was covered in a not so fine layer of dirt and mud.  Wayan found a good place for this “MTB Bali” sign. 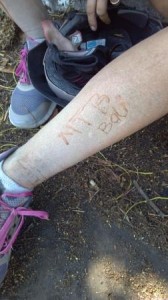