Last week, Jimmy and I decided to check out the Cambodian coast. Cambodia’s main beach area, Sihanoukville, is about 170 miles from Phnom Penh on the Gulf of Thailand. We were warned that the beaches don’t rival Thailand’s, but luckily we haven’t been to Thailand yet, so we figured we wouldn’t be disappointed.

The evening before our trip, which was Thanksgiving Thursday, we stopped by a local bike shop called Vicious Cycles and picked up two mountain bikes. At $10 per day (plus $1/day for helmets) the price was a bit steep, but the guys working at the store gave us some useful information and the bikes seemed to be in good condition. Our plan was to make the 170 miles in 3 days – we weren’t in a hurry and didn’t know what the road conditions would be.

We got up early Friday morning intending to try to get out of Phnom Penh before the roads got clogged at rush hour, which lasts from about 7-8:30am. But it was pouring rain, and we couldn’t find breakfast around our hotel until 7am, so we made it a leisurely breakfast and finally got on our bikes just before 8am, and right smack-dab in the midst of the busiest traffic time of the day.

Getting out of Phnom Penh felt like being a star character in a human video game. We only had to take one road, but that road was packed with cars, tuk tuks, motorcycles and motorbikes, bicycles, the occasional pedestrian, and food carts. Of course, being from Washington DC, we are used to riding in traffic, so in and of itself that was not a big deal. The real problem with Cambodian motorways is the challenge of the left hand turn. Because there are few to no traffic signals, no stop signs at crossroads, and certainly no traffic law enforcement, most motorbikes and bicycles wanting to turn left are forced to turn into oncoming traffic and ride against it until they find a chance to dart across the road into their correct lane. So heading out of Phnom Penh, we often found ourselves smack-dab in between chaotic rows of traffic heading the right way, and a line of motorcycles and bikes looking for a chance to veer across the highway to the other side. Luckily, the video game was mostly a slow-speed chase, so within an hour or so we were able to release the death grip on the handlebars. 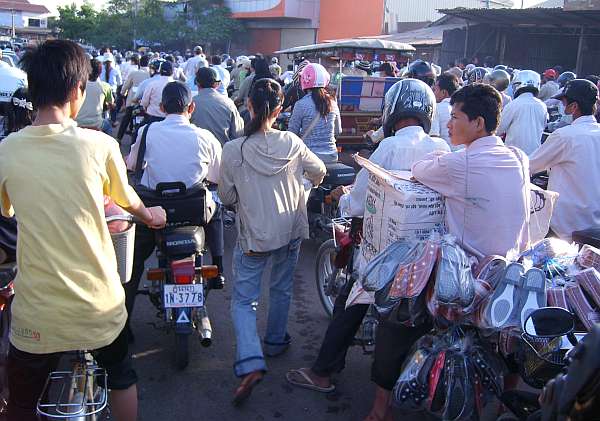 Our first day took us about 48 miles down a secondary highway, Highway 3, to a town called Takeo. The road was mostly paved with a red dirt shoulder, and some traffic – primarily trucks or cars headed to the coast, or local motorbikes. We rode through scores of Cambodian small towns and villages, so there was always easy access to water or snacks, though we had to do a lot of pointing. As the day went on, there was more space between villages and we started to catch glimpses of the green rice fields and Cambodian countryside. Through some areas, we had to keep up a steady stream of greetings and waves, as every kid who glimpsed us would call out “Hello! Hello!” Many times, we would hear a muffled voice but see no one. The small voices were coming from inside houses or hammocks or shops; somehow those kids have x-ray vision for spotting foreigners on bikes.

It soon became apparent that the only real problem with this ride was going to be that it was hot. Really darn hot. It’s the dry season in Cambodia, and by 10am the sun is high, as well as the humidity. During the last 20 miles of the day, things were getting pretty rough, despite our rather pedestrian speed and our frequent breaks. Luckily, we picked up an escort during our last 15 miles in Takeo – a phone-card salesman on a motorbike who wanted to practice his English. He rode next to us and quizzed us on America, our lives, sports, how many countries we’d visited, eating crickets and snakes, the cost of an i-phone in the US, and many other germane topics. Talking with him took our minds off the fact that we were simultaneously frying and dropping buckets of sweat onto the highway.

Some of our many school-bound escorts.

We pulled into Takeo about 1pm and shortly found a guest house for $15 with a TV and an air conditioner (lo mas importante!). November and December is “wedding season” in Cambodia and a group was setting up the traditional pink-and-green fringed wedding tent outside.  The guy at the front desk tried to show us a room at the back of the hotel, but we asked for a room at the front. He shrugged and consented. We made our way to the only restaurant in town with English words on the menu and ate a great meal of Cambodian noodles, rice and Angkor beer. Coincidentally, twenty American Peace Corps volunteers were the only other guests. Apparently they were attending a training before heading to their village assignments and had gotten finished early for the day. They were using the time (wisely) to get sloshed on cheap cans of beer, which the waitresses regularly brought out on plastic trays.

That afternoon, the wedding reception happened right outside our room. It started at 4pm and guests stayed until well after midnight. The last few hours were punctuated by bouts of extreme karaoke on a bad sound system. As it turns out, we had requested the room that basically was inside the wedding tent. Thanks to the bride and groom for inviting us. The singing was superb.

The next morning, we had breakfast at a roadside café a couple of miles down the road from Takeo. There we discovered iced coffee with condensed milk, which caffeinated and sugared us enough to forget about the bad road and long, hot day ahead. 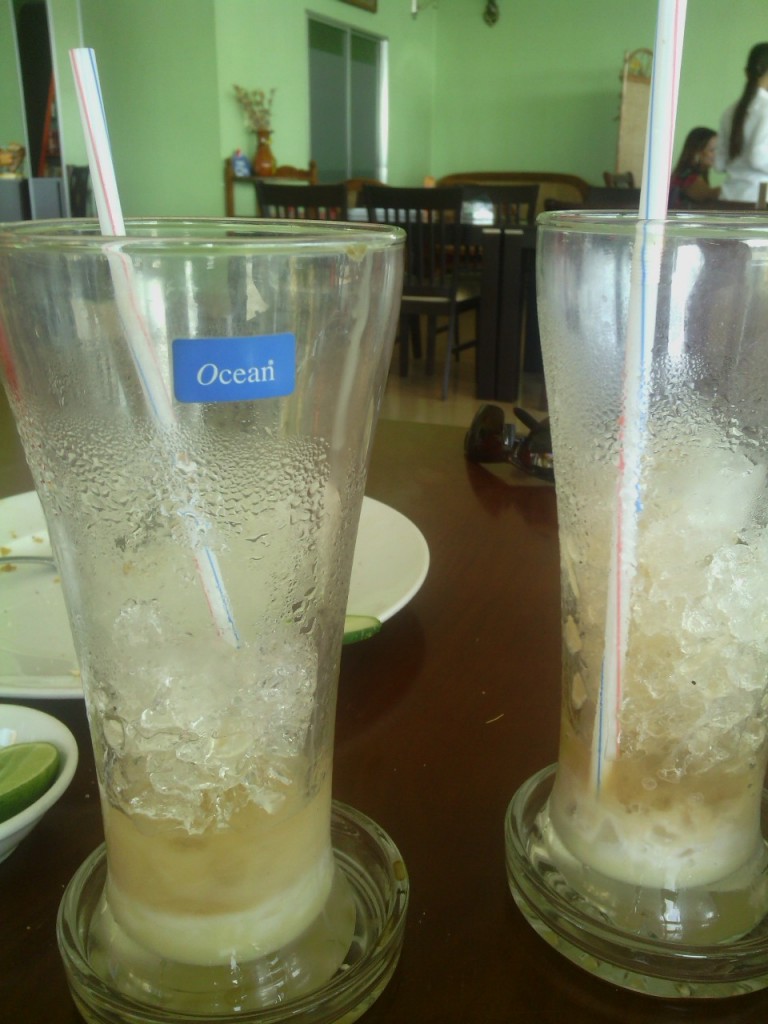 Later in the morning, we started seeing some mountains in the distance, and more rice fields. There were water and snacks everywhere along the way, and this was the day that I made both the wonderful discovery of a giant bag of tiny single-wrapped Oreos that could be stuffed into our jersey pockets, and the horrid discovery of the taste of Durian fruit. Durian is a famous regional fruit in SE Asia, similar to Jackfruit in appearance with a hard shell and prickly spines on the outside. In certain places we have been, particularly Singapore, durians are actually prohibited because of their nasty stink. As I learned at about mile 30 of the bike ride when I chomped down on a durian cookie, their smell has got NOTHING on their taste. After tricking Jimmy into tasting the cookie too (because, well, that’s only fair, right?) and gleefully watching him gag too, we got back on the road. 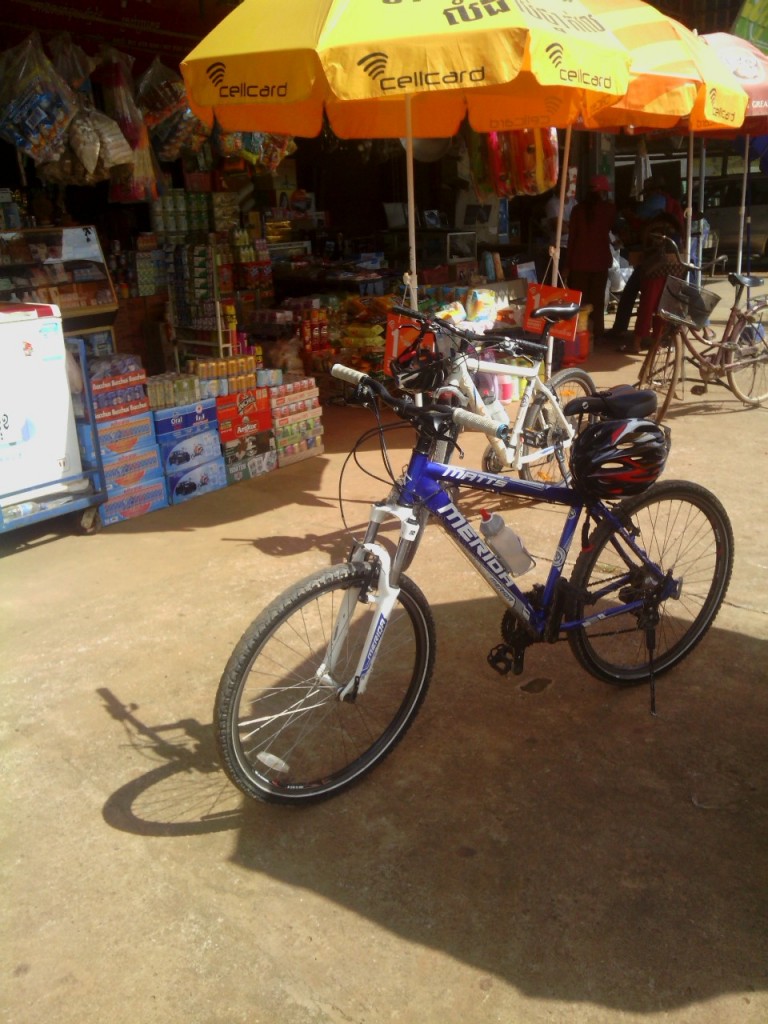 The site of the famous bag of tiny Oreo cookies. Sustenance!

Our destination on Day 2 was Kampot, an old French town on the river that has just recently begun hosting tourists. After tooling about town for the afternoon, including a massage for me on a second-floor terrace of an old French building, we ate dinner in a fantastic Jungle-book-like restaurant on the river called Rikitikitavi. 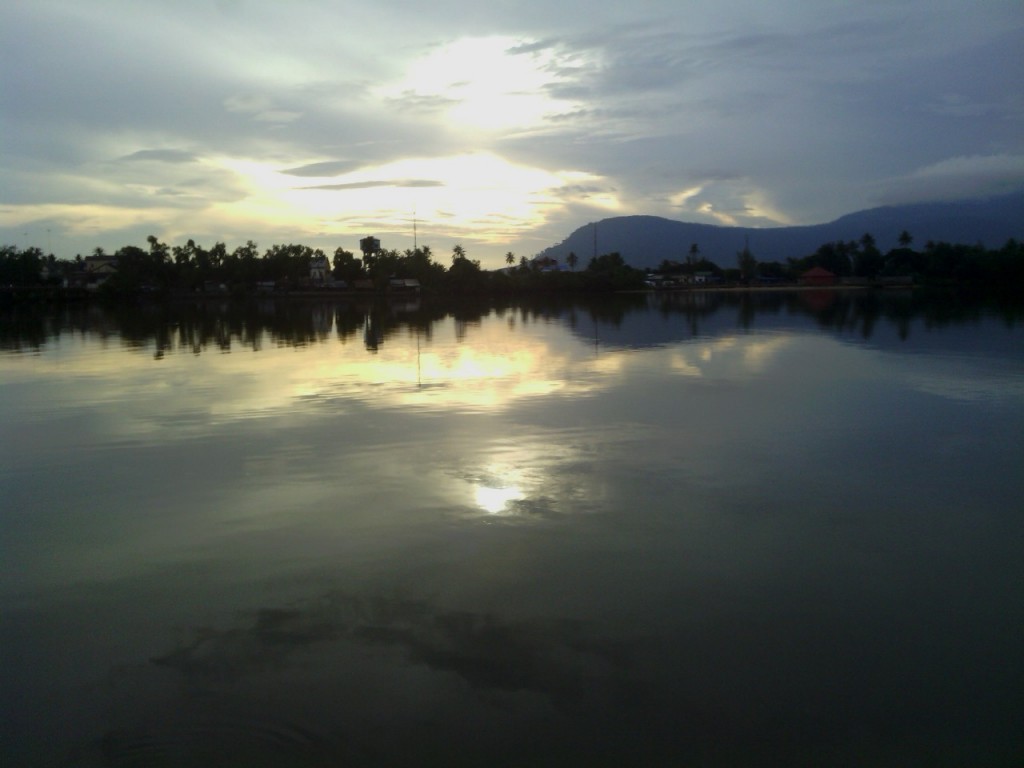 The river from Kampot town.

Our last day of cycling was our longest – about 65 miles into the beach city of Sihanoukville. The first part of the day was lovely. We rode past mountains and palm forests on our right and could occasionally catch a glimpse of the ocean to our left.

On the (sometimes paved) road from Kampot to Sihanoukville

About halfway through our ride, we merged onto the main highway, which was the only road to take us to the coast. We had read that this road was not very heavily traveled, but as it turned out we had chosen a weekend that was also a holiday, which meant an absurd number of minivans, motorbikes and tour buses rumbling towards the beach. Back to the video game, as we made mad scrambles to hop curbs onto the dirt shoulder every two minutes or so as large trucks blared their horns to run us off the road, or oncoming traffic passed with no acknowledgement of who was coming towards them. We had about five climbs, our first of the trip, into Sihanoukville, which provided a welcome change of terrain.

By the time we made it into the outskirts of Sihanoukville, it was 1:30pm. And I was parched. At one point, an Angkor beer truck passed us and I shouted hoarsely, “I want to drink you!” After a few misses at pointing ourselves the right way in the traffic of what turned out to be a much larger city than we expected, we finally rolled into Serendipity Beach, the big backpacker hangout in Sihanoukville. We sat down at a beach café and ordered a “jug” of beer for $3, which was gone in about 10 minutes. 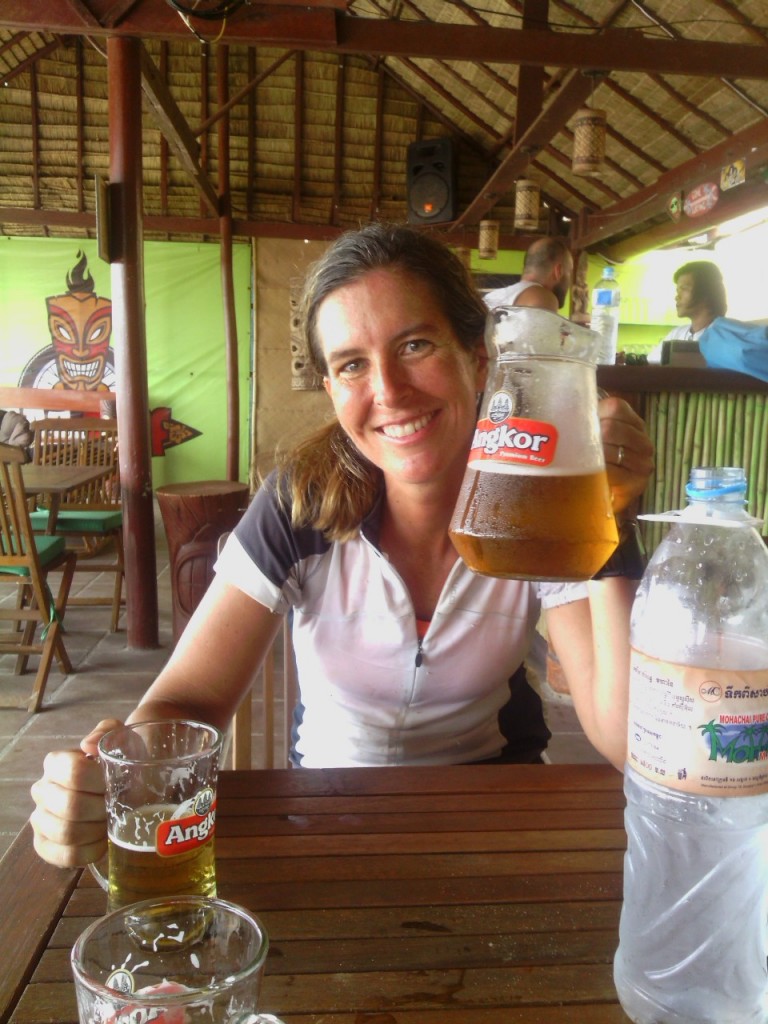 We spent that afternoon and the next full day at the beach and the pool at the amazing hotel we stumbled upon for $30/night. We had mojitos at a beach bar, with the water lapping right up near our chairs, and ate fantastic Indian food in a restaurant that was basically just an extension of the Pakistani owner’s house. The owner’s Cambodian daughter Maria, who is 12, played our waitress, and while we were waiting she and I watched the Gangnam Style video on my phone. She also told us about school – she’s the smartest in her class in English, and, she said that in her other subjects “no one can beat me.”. Her dad wants her to go to college in India, but she confided in us that she doesn’t know if she wants to go because there might be other kids who are smarter than her. We assured her that there would be, and that this was altogether a good thing. She was dubious, but the food was delicious. 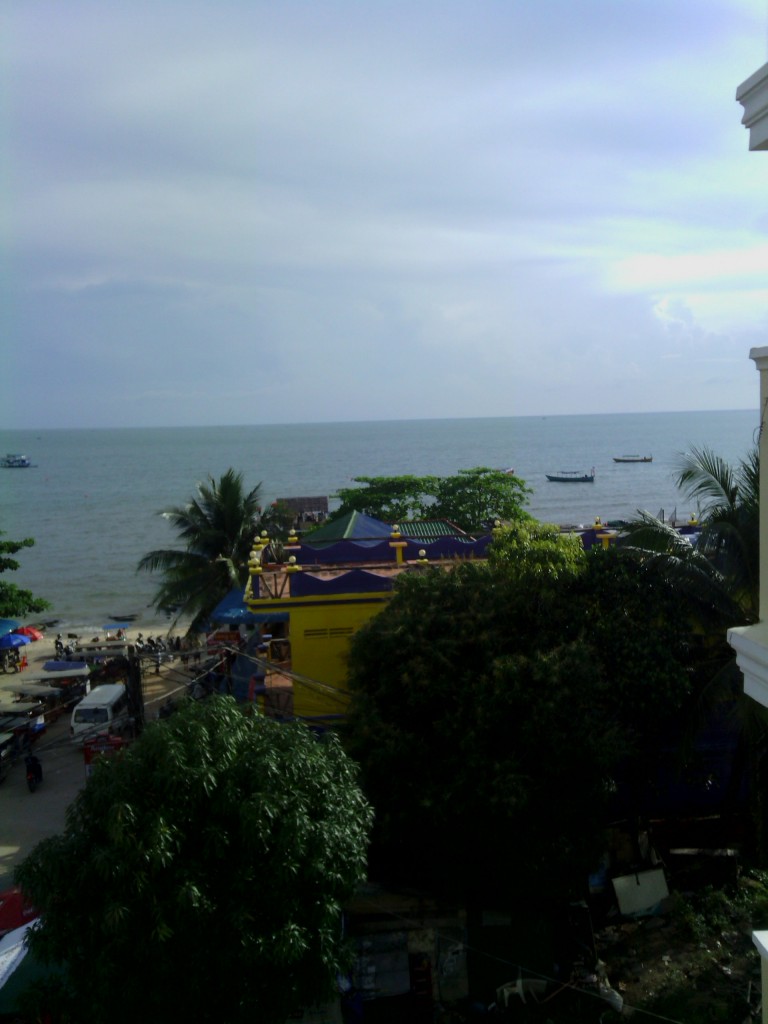 Water at Sihanoukville from our hotel. It might not be Thailand, but it looked pretty good to me.

On Tuesday morning, we loaded our bikes onto the bus and headed back to Phnom Penh – even smellier, saltier, and happier than we had been four days before. 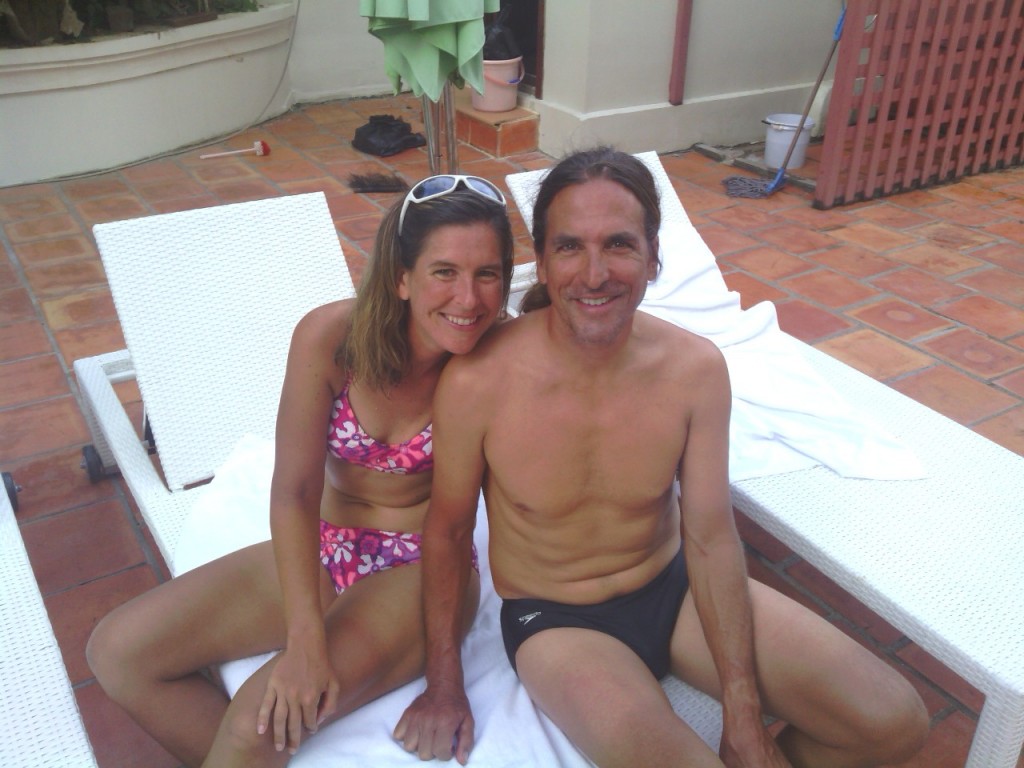 Hanging at the pool after arriving in Sihanoukville. Comments about speedos welcome.