I wheeled my bike out of the hotel in the dark, around 4am. Everything was quiet and still outside, and it took me a minute to figure out which direction I was supposed to be headed. I crossed an old bridge heading out of town and was immediately sure that I had taken the wrong route. My Garmin had not picked up satellites yet so I couldn’t be sure. When I tried to check it, it shut off. As I waited for it to power back up, I stopped and checked my phone. I was on the right track, so I carried on.

Outside the lights of town, the night was pitch black and all I could see was the line on the road illuminated by my headlight. I had very little experience at night riding, and next to none doing it alone, and the sensation was a bit strange. But quickly, I noticed how nice the moon was, low in the sky, and the sound of silence, save the occasional car in the distance. As the light began to appear in the sky to the west, I saw I was riding through flat countryside, interrupted by small houses with tidy yards and front porches.

I thought about the last time I was on this road. In 1998, the summer before I started grad school, I had boarded an Amtrak train in Chicago with an old steel-frame bike (down-tube shifters!) and took an impromptu trip across the country, stopping in Eugene, Oregon before heading down the California coast and then to Texas. While in Eugene, on a whim I did my first overnight bike trip, riding the flat 50 miles from there to Corvallis, then back again the next day. I remember being exhausted afterwards, and quite impressed with myself.

With the sun up, I made my first phone call during the race – I called my mom to tell her I was having fun. My parents had been supportive of this venture, if slightly (and logically) perplexed. We chatted for a while and then I rolled into a McDonalds just off the route in Coburg, slightly north of Eugene. I sat on the curb in a gas station parking lot and ate three Egg McMuffins, which at the time seemed like a lot of food. (Little did I know…) I chugged half a cup of too-hot coffee and then wanted to get going, so I figured out how to jam the cup in my feed bag to minimize shaking. 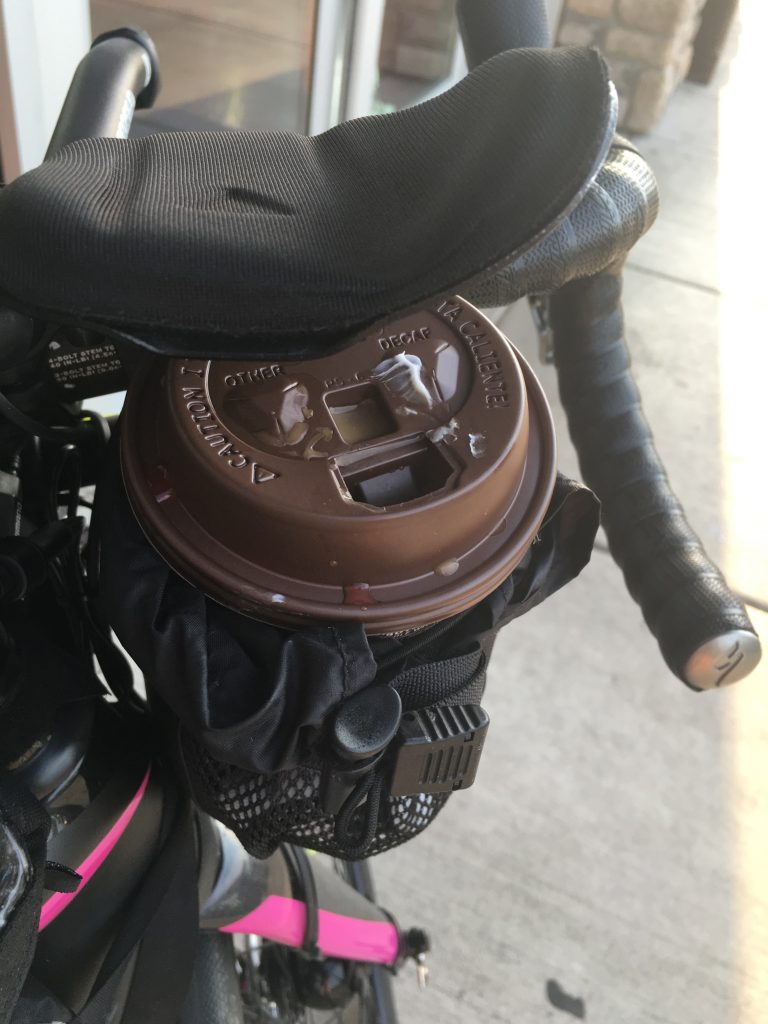 I hadn’t looked closely at my route map for the day, but I knew that I was aiming to get over McKenzie Pass to Prineville, which was about 175 miles from Corvallis. McKenzie Pass is one of the more well known passes on the route, and I knew that some racers had aimed to get over it the night before.

The route turned from southerly to west just after breakfast, and I spent the next few hours of the morning riding upstream, and just slightly uphill, along the dawdling McKenzie River. This area is a popular tourist draw, and along the way I passed through many small towns with bakeries and restaurants, and rental homes and cabins perched between. As the morning wore on, the traffic picked up – I remember seeing lots of of cars with bikes and kayaks, and feeling mildly jealous.

The heat was becoming a problem again – my Garmin said the temperature was pushing 100 degrees. At some point I realized that I had been riding for a long time with no sign of McKenzie Pass, so I stopped to check the map to see if I was lost. That’s when I realized that the pass didn’t even start until 100 miles from Corvallis, which meant that I would be climbing it in the middle of the day. 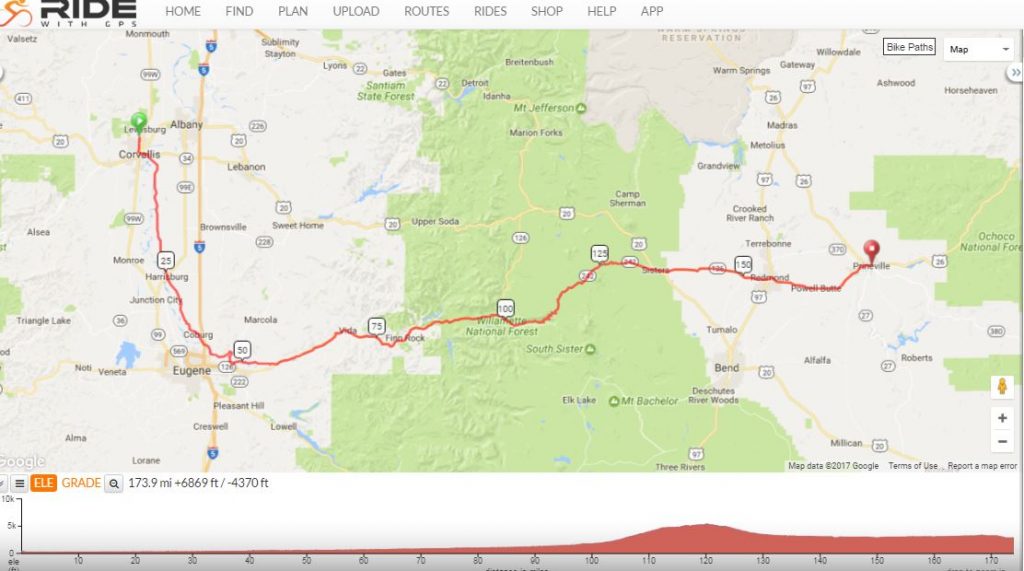 At the last stop before the beginning of the pass, I stopped to fill up on drinks and food, and crossed paths with Joseph Boquiren. It was nice to see another racer, since I hadn’t seen anyone since Evan the evening before. McKenzie Pass is one of Oregon’s iconic passes. From the west side, where we would start, the pass is about 25 miles to the summit and climbs roughly 4,000 feet. Luckily, most of the road up and over the pass was closed to cars, so there was no traffic to contend with. The bottom parts of the climb were shaded, and since it was Sunday, there were plenty of people out for weekend rides. I tried chatting with one guy I passed on the way up, but he let out a “harrumph” when I caught him – which I’ve learned over time is generally a sign of irritation at being passed from behind (exacerbated, frequently, by the fact that the catching is being done by a girl) –so our relationship was short-lived.

Being from Colorado, I found this pass long – but not particularly hard. My legs felt good, and I only stopped once, near the gate that closes the road to cars, to chug water and look around. But it was hot, and it dawned on me as I climbed that I had not carried enough fluids. Near the top, as the grade flattens out, you find yourself amidst a 2,000 year old lava flow. The landscape becomes moon-like and spectacular, and close to the summit you can see the Three Sisters, three 10,000 foot volcanoes in the Cascade Range. 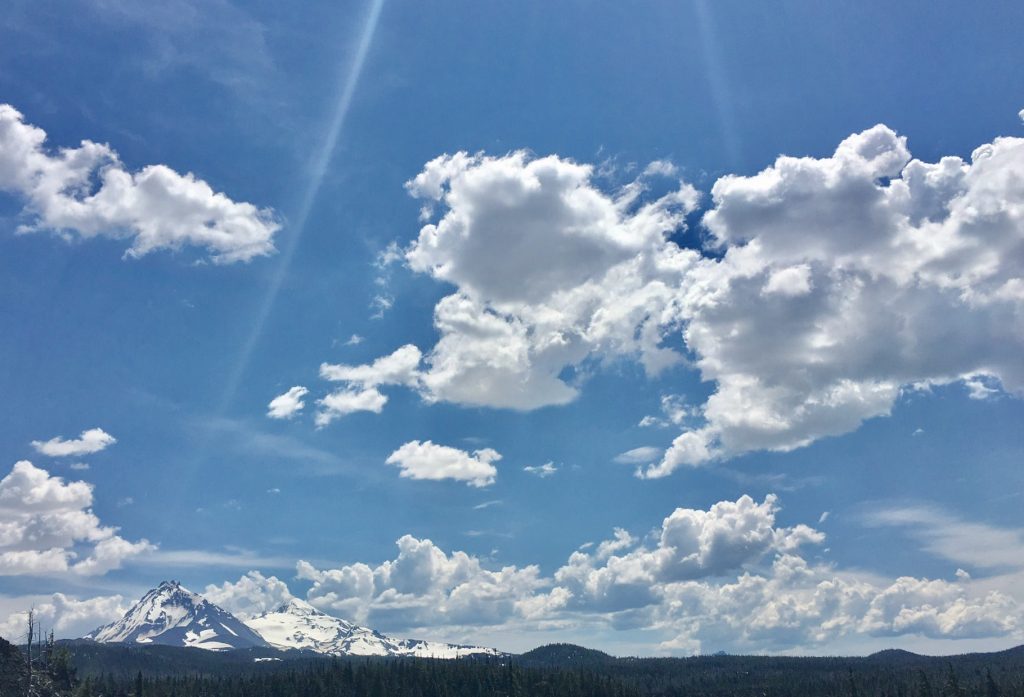 That lava rock also absorbs the heat of the sun, and sends it burning right into your skin. I was relieved to summit the pass. I took a couple of photos and then zoomed down the other side, anxious for water. This was my first (unfortunately not last) brush with dehydration, and I promised myself I would prepare better in the days to come. 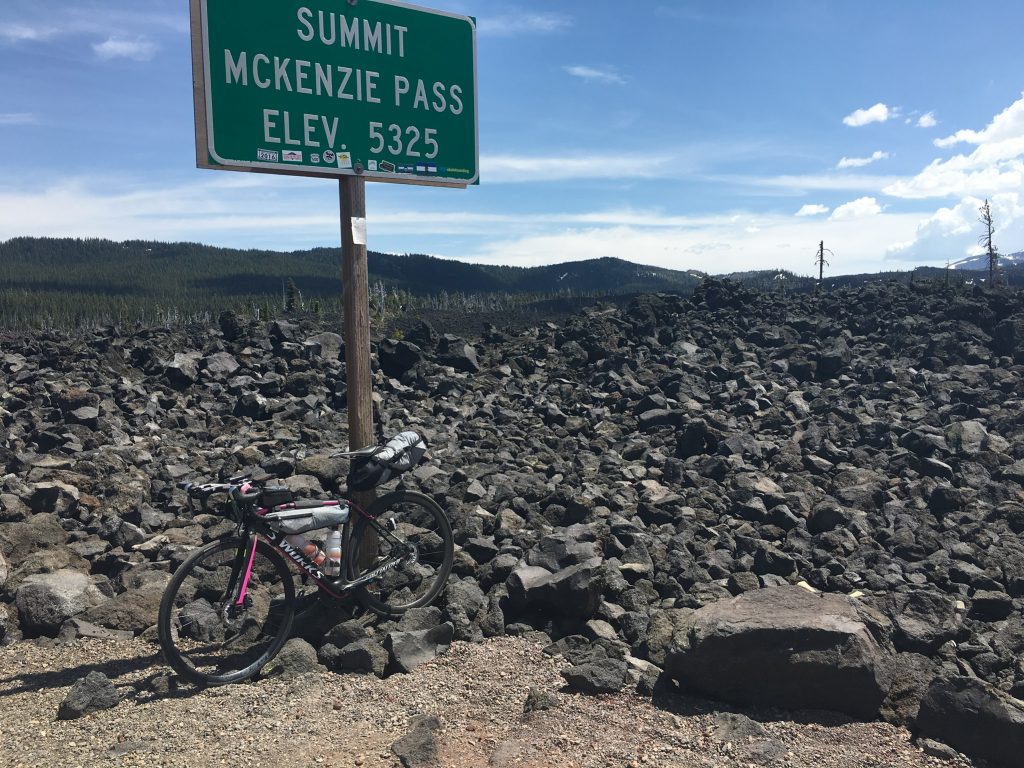 Rolling into Sisters, I saw Andi Buchs, waiting in line outside of a burger shack. The temperature read 100 degrees. Standing outside seemed awful to me at the moment, so I rolled a bit further down the main street until I found a coffee shop with FroYo and air conditioning. I ordered a smoothie and a giant frozen yogurt, which I topped with every kind of candy and sauce available. I sat in the delicious air conditioning for about an hour. Andi came in and said he was hot and planned to wait out the afternoon heat a bit. I decided to carry on – distinctly aware it was a dubious decision.

The ride between Sisters and Redmond is only 20 miles, but it was my first insight into how long 20 miles can seem in blazing heat after 140 miles on the bike. When I finally pulled into Redmond, against my better judgment I stopped again – at a Starbucks this time – and ordered a large (pardon my Italian, I mean “venti”) caramel frappuccino.

The barista asked me where I was riding from, and was shocked to hear I had come from Astoria. Then she asked me where I was going. When the word “Virginia” came out of my mouth, I think I was as surprised as she was. In that moment, standing there at the Starbucks counter, I had my first realization of the enormity of the challenge that was still ahead. I was barely halfway across Oregon, and I already needed extra whipped cream.

So I got extra whipped cream. Then I sat near the window, watched the traffic go by for about 20 minutes, and decided I was too tired to cry. Plus, it was only 20 miles to Prineville, my goal destination for the day.

I got bike on the bike, put my headphones in, and listened to the same five songs from an old Tori Amos album for the next 75 minutes or so. The descent down into Prineville was beautiful and sweeping and as the sun started to lower, the air cooled and the rocks in the valley were turning colors, like a painted desert.

My mood got better as I flew down, and the descent was easy into town. I chose at a Best Western on the east side of town and had to wait in line to check in. There was a diner next door to the hotel called the Apple Peddler restaurant, so after I cranked up the air conditioning, I changed into a pair of leggings and t-shirt and headed over. I sat down in a booth, determined to feel like a normal person eating at a restaurant, not the sweaty-blubbering-sunburned mess I felt like. I asked for a glass of wine and a cheeseburger and promptly spilled the glass of wine all over the table. I asked for another glass, and also an order of nachos to go. 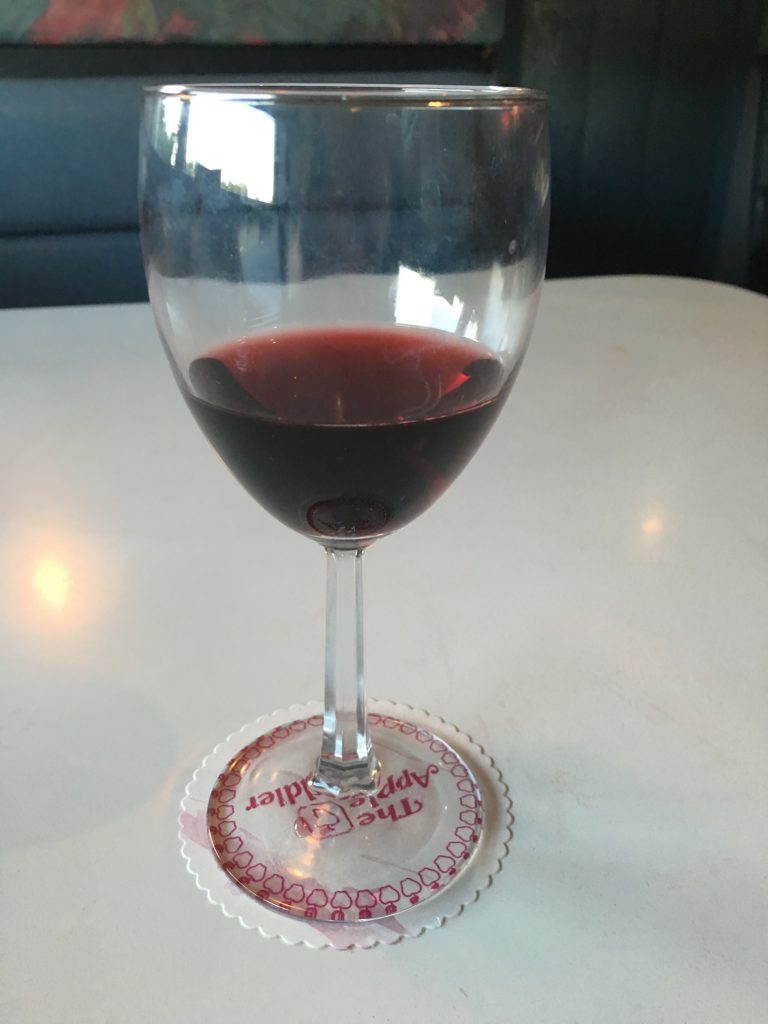 Back at the hotel, I checked TrackLeaders. There were several other riders staying in town, though I don’t remember now who they were. Determined to do better planning and know what terrain was upcoming, I also pulled out my paper maps and examined the next day’s route, which I had planned to be nearly 200 miles to Baker City. There was a lot of climbing, and probably a lot more heat, ahead so I determined to get an early morning start. I posted this photo, then fell asleep. 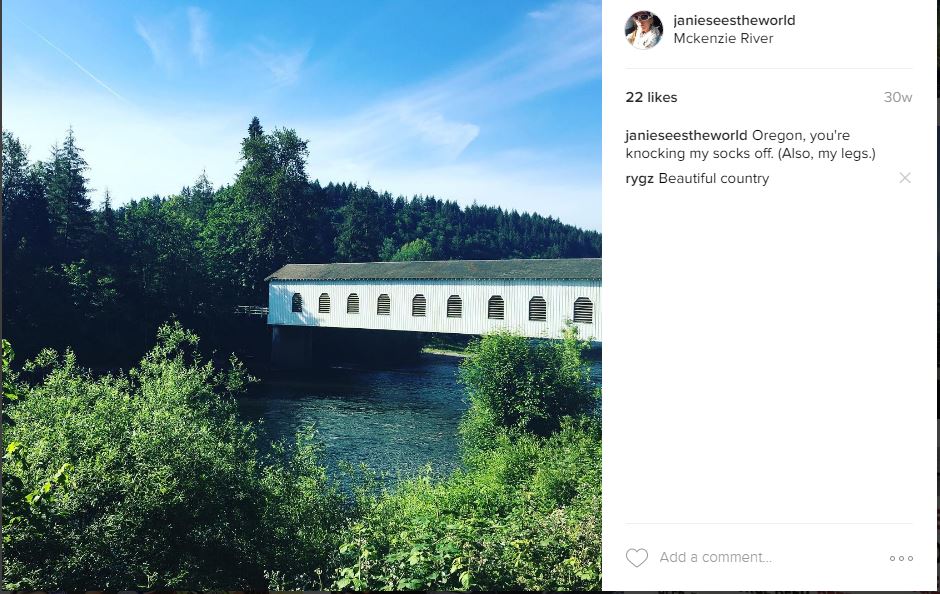