A little more stiff and insolent than the mornings before, I got up in the darkness to get on the road. It was clear that the saddle sore blisters were going to figure into my adventure as a problem. I took some advice from my friend, Donncha Cuttriss – a veteran of the Trans Am who had generously provided me with some invaluable support and advice on training and prep in the lead-up to the race – and snagged a washcloth from the motel for some additional cushioning until I could figure out a more permanent solution.

I rolled out through Baker City’s main-street stoplight wearing two pairs of bike shorts with a washcloth jammed down in the left leg between them. It wasn’t pretty, but then again nothing about my situation was attractive at the moment. I simply hoped it would provide some relief from the pain. My new Garmin file was about a 200-mile route from Baker City to Riggins, Idaho, traveling down the Snake River through what is known as Hell’s Canyon and into Idaho. As I woke, I found myself somewhat buoyed by the idea of state number two, and a new time zone. 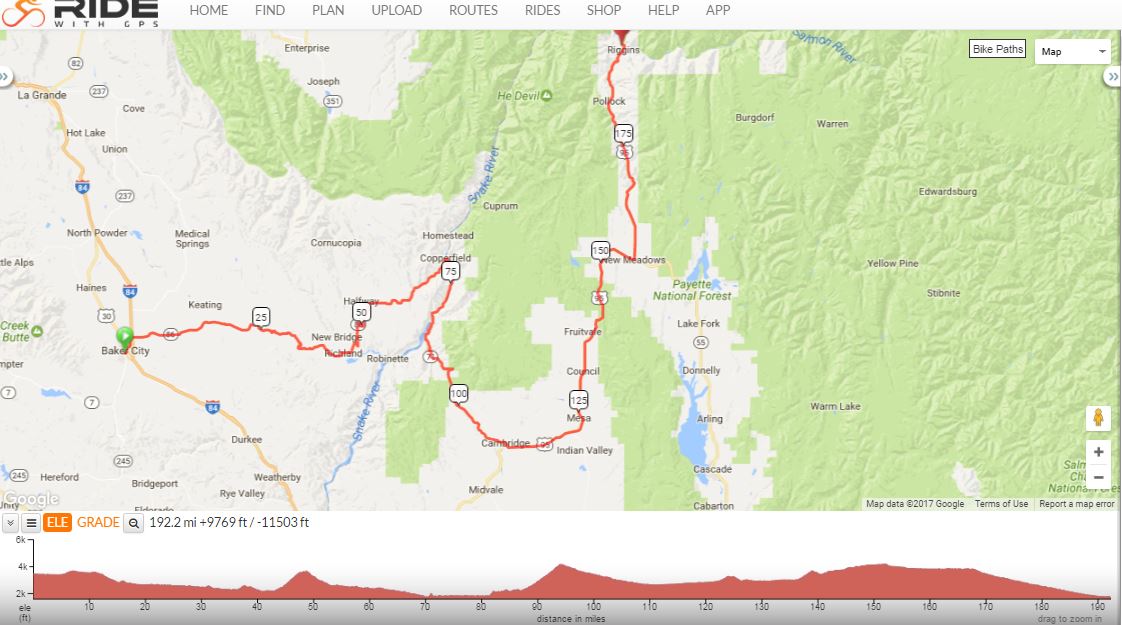 The Snake River marks the border between Oregon and Idaho, and to my mind, a milestone – albeit a hot one, as the temperature had reached 100 degrees. Just before dropping into the canyon, the route skirts a town called Halfway. That morning, in my current state, the name just seemed rude, and personal, since I was sure I was not nearly halfway to anywhere. Just before entering Hell’s Canyon, I stopped at a general store where the owner, a dot watcher, greeted me by name – and then instructed me to remove my bike from the porch. When I complied, all the while rolling my eyes behind his back, he offered me free bottled water and told me that I was “nicer” than some of the racers from the day before. I silently disagreed, but I was thankful for the stop and the opportunity to refuel. 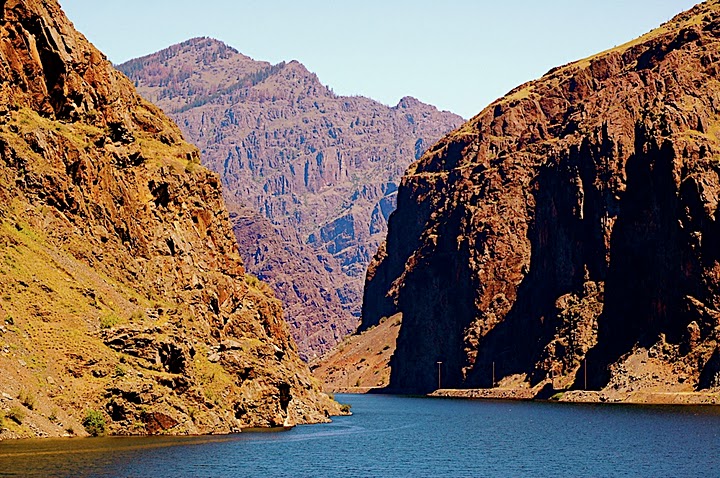 I headed into Hell’s Canyon for a meander along the Snake River. This canyon is the deepest gorge in the US, and the walls got higher and higher as I proceeded toward the Brownlee hydroelectric dam. Just before the dam, the road crossed a bridge from Oregon into Idaho, putting the river on my right side and commencing a long climb out of the canyon. 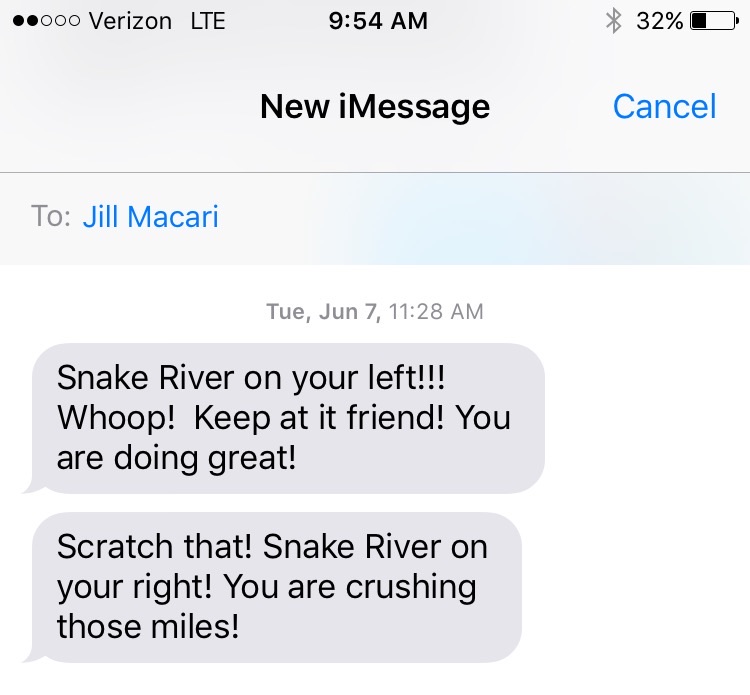 Encouraging words in the heat of the day from my friend Jill.

From there, I made my way slowly up a 10-15 mile climb away from the river and southeast into Idaho. The temperatures had reached 110 degrees, and the riding for the next 50 miles was unremarkable, rolling and through a few small towns. Coming out of New Meadows – such a pleasant name, so be warned – about 6pm and 160 miles into the day, I encountered a section of dreadful thick gravel mixed with tar, which appeared to be the precursor to new chip seal. I heard later that some riders had been required to get in a car to traverse this section; unlucky me for arriving after the workers had gone for the day. I traversed this section with much skidding, eye burning, and gnashing of teeth, as cars flew by on both sides, free from the constraints of a center line or shoulder. 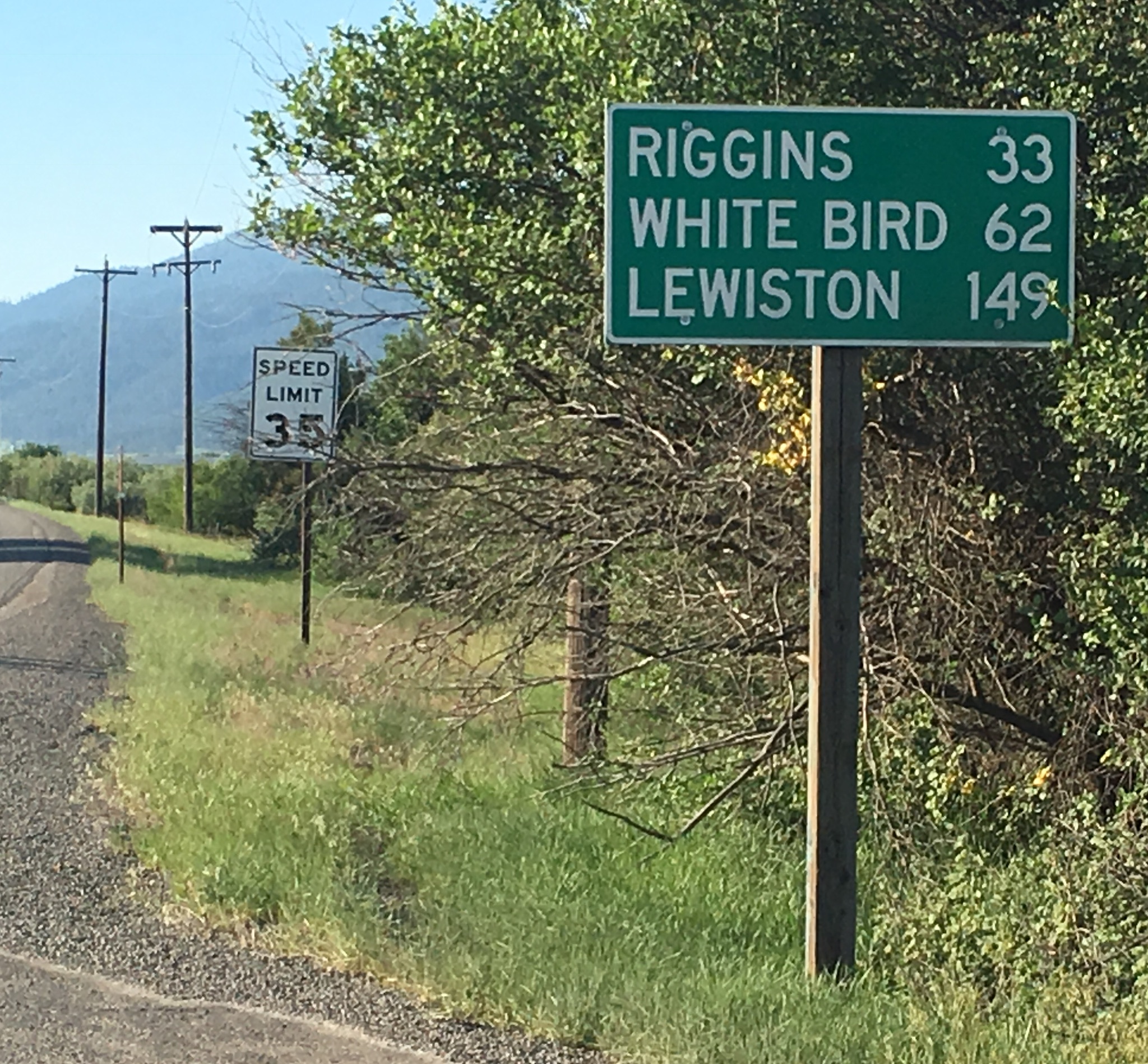 A hint of chipseal gravel.

After five miles or so, the pavement reappeared, angels sang, and I reached the long, beautiful, fast descent into Riggins, Idaho. This section was one of my favorite of the whole race, made better because I reached it during the evening hours, with little traffic. There’s not much of a shoulder, but the views are spectacular, running along the Little Salmon River, and the 20-mile descent flies around gentle curves. There was still enough light to see, and I watched the sunset on the canyon as I moved in and out of shadows and waning light. Close to Riggins, I encountered fishing season in full force, with dozens of men in beards and pickup trucks drinking beer, gathered with their rods on the side of the river.

All day I had been mulling over where to stop for the day. I had heard of Riggins as a salmon-fishing hub from my friends Kim and Justin who own Lakestream Fly Shop in Whitefish, Montana. When I arrived, I had covered about 180 miles, it was getting dark and the town seemed like a logical stopping point for the night. I propped my bike up outside a small shop, which turned out to be a gourmet deli, full of wines and cheeses. I thought about going somewhere else, but instead purchased an obscene amount of cheese and salami. For a minute, I stood in front of the wines and considered a bottle.

Outside, I barely had room to jam all my meats and cheeses into in my saddle bags. I headed through town to find a place to stay. Then, for some reason, I just kept riding out of town. On the other side of town, I found myself still in the canyon, and a check on the maps showed I was about 25 miles from White Bird, the next town along the river (population 91). I called Jimmy, who had found a bed and breakfast just at the entrance to Hell’s Canyon. Then I called the only motel I could find in White Bird. The woman who answered sounded confused about whether she actually owned a motel or not, but I told her I was coming, and to keep an ear out for me.

It was dark as I rode through the canyon, and only the occasional passed. My saddle sores were really hurting and I was tired. As it got later, the traffic decreased and my headlight began to flicker. My Garmin died. I couldn’t help but think of Deliverance. 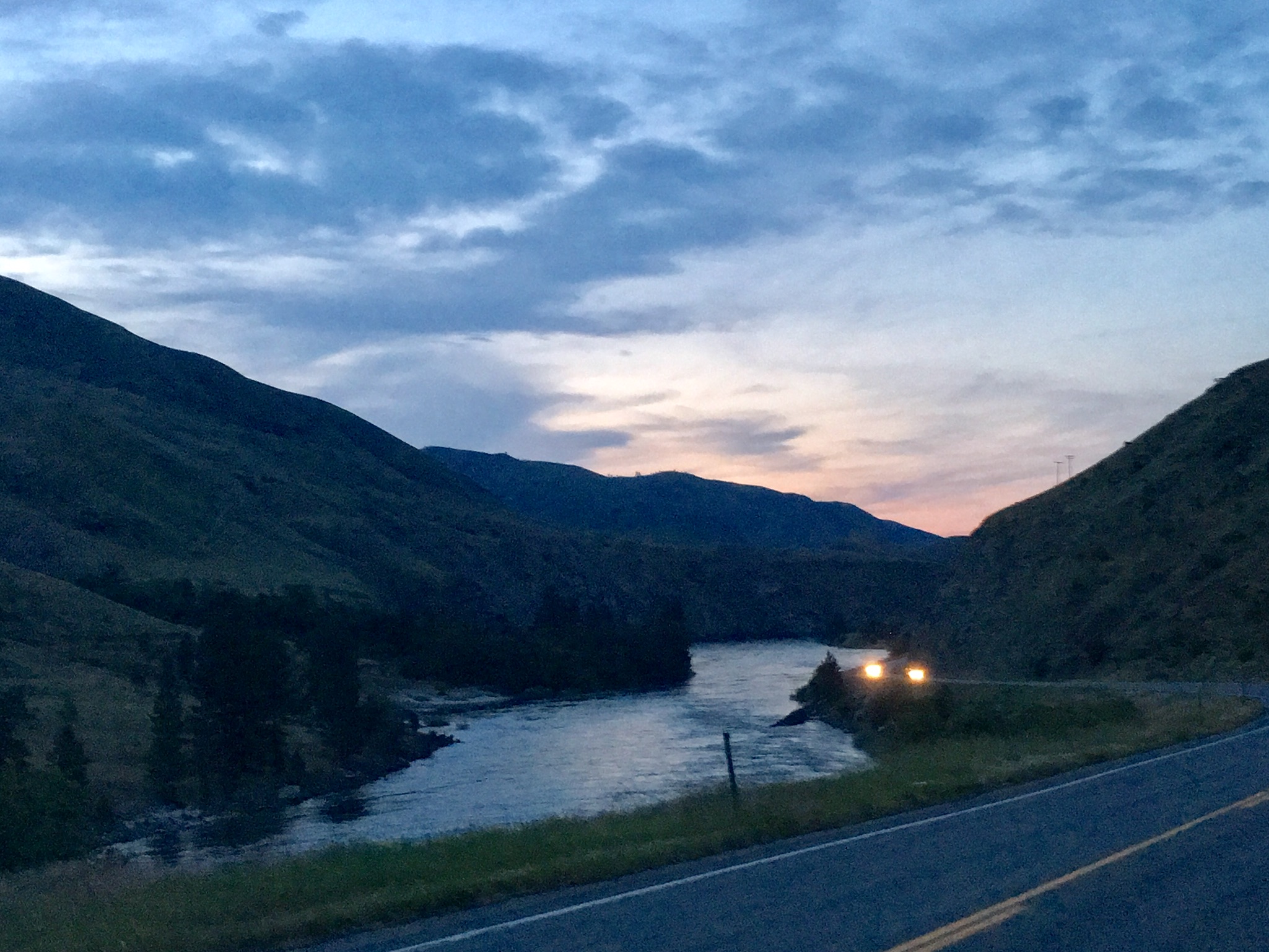 Through the canyon between Riggins and White Bird as darkness falls.

The left turn to White Bird was badly marked and led to a small road with no lights. As I turned onto it, I saw a shadow of…something, moving to my left. I yelped. I was not wearing a headlamp and so I couldn’t shine light on it to see what it was. The “thing” moved along next to me, not making a sound, then at some point disappeared. I was descending and couldn’t see a house or building. It was midnight, and I was sure I was lost. The thought of having to turn around and climb back up to the desolate canyon (and the “thing,” whether or not it was real or hallucinatory) was horrifying, but seemed a potential reality.

Then suddenly, the flickering lights of a motel came into sight. The low-slung building looked worn down and worse for the wear, but was a beautiful sight to my eyes. The woman who eventually answered my increasingly frantic knocking wore pajamas and was rubbing sleep out of her eyes. She told me in a groggy voice that another rider (who I think was Michael Wacker, though we never crossed paths) was staying in an adjacent room. I am fairly certain we were the only two guests.

I sat in bed for about an hour, gnawing on cheese and a hunk of salami. I had covered 215 miles that day, 200+ for the first time, which was pushing the limits of what I thought was possible for me. I was in a new state, a new time zone, and a new frame of mind. Knowing I was set to tackle the (in)famous White Bird Hill the next morning, I set my alarm for 5am, posted this photo and went to sleep. 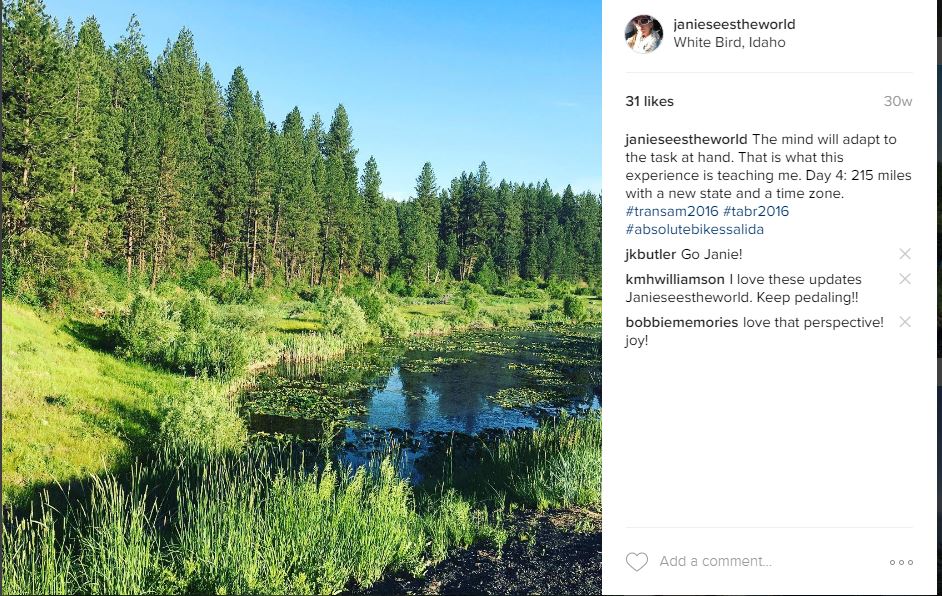