My alarm went off just after 4am. I got ready and carried my bike bags out to the shed where my bike had spent the night safely behind a two by four. Putting my bags back on in the darkness took a bit of time, but soon enough I rolled into the warmth of the morning air. 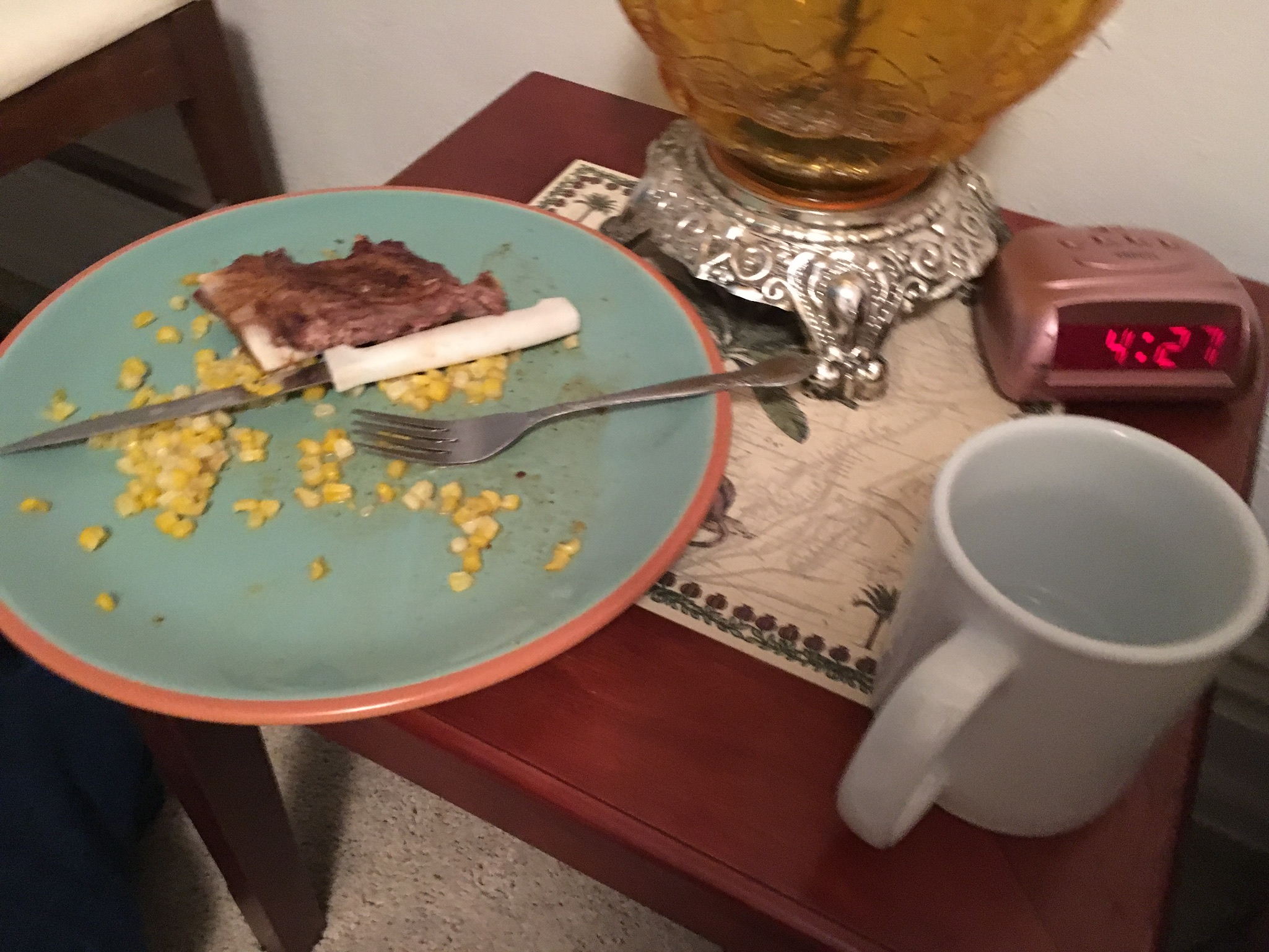 Remains of the midnight pork chop.

One hundred miles ahead was the Kansas border, and I wanted to hit it before noon. In the preceding days I had looked forward to Kansas with alternate excitement and trepidation. The winds, storms and heat that can accompany riders through this state make it perhaps the biggest wildcard of the race. Good conditions could be merciful. Bad ones, downright soul destroying. And because Kansas is smack dab in the middle of the race, it also has the power to set a tone for the final days of the journey. You could come out the other side alive – or not so much.

Without much fanfare, the day before I had passed the race’s halfway point, about 2100 miles. I’m not sure I even knew until someone sent me a text to congratulate me. Like most milestones in the race, I could see both the bright and dark side to this victory. It was reason to celebrate, of course, but also to lament: 2,100 miles down equaled 2,100 to go.

My uneasy mood this morning was also partly exacerbated, ironically, by the exuberance of seeing so many friends the day before. By comparison, the days stretching out in front of me were bound to be lonely.

As the sun rose, I realized they were also bound to be hot. The temperature was quickly into the 90s in the morning and soaring towards 100. I reached the Kansas border around noon, as I had planned.  The Trans Am route for the next 200 miles or so is one straight, flat road due east. Small towns are planted every 15-25 miles or so, little oases in the desert. As the heat mounted in the early afternoon, my routine at each one of these towns took on a clear pattern: Guzzle cold water, eat ice cream, dump cold water on sun sleeves, put ice in bra, dump ice down pants, treat saddle sores. Carrying 3 bottles of water – two to drink and one to pour in the holes of my helmet while riding – was just about sufficient to get me to the next town while barely avoiding heatstroke.

In the mid-afternoon, leaning down in my aerobars in the middle of mostly nowhere, probably squinting for the sign of the silos that would mark the entrance to the next town, I heard a click of bike gears behind me. I had been waiting for Ben Colwill to catch me for two days. Early in the race, Ben had been among the leaders, but a serious mechanical had stopped him in Wyoming. Now he was back on the road moving up in the race quickly. I was excited to see another racer, and hoped that some camaraderie might help to lift my mood.

Ben pulled up beside me. As I sat up and turned to talk to him, he gave me a smile, a salute of the hand, and rode on by.

I couldn’t believe it. How could he not want to talk to me? How could he ride on ahead like that, leaving me in the heat to suffer…alone?

When I arrived at the gas station in the next town, Ben’s bike was outside. The increase in my core body temperature had apparently increased my capacity for drama, and I stomped inside to where Ben was sitting, drinking a coke and minding his own business.

Ben looked at me, confused. “Excuse me,” he said.

“You’re in such a hurry, you couldn’t even stop for five minutes to talk to me!” I said accusingly.

“Uh, sorry,” he said. Sorry for being able to get to this air conditioned gas station faster than you, was probably what he was thinking.

I couldn’t think of a follow-up, so I went to ice down. A few minutes later and a few degrees cooler – also a bit chagrined about my outburst – we talked as we got ready to leave. I hoped he wouldn’t hold my temper tantrum against me.

All that afternoon, Ben was part of my gas station hop pattern. He was riding faster than me, but would usually be at the next gas station when I arrived. We would commiserate about the heat, ice down, ride out together, then meet up again at the next town an hour or so down the road.

In the early evening, I rolled into Dighton. The sun was setting but I still wanted to make the next 40 miles to Ness City that night. To bait myself, I had called the only motel in town and made a reservation. Ben was there, and agreed to ride with me, as he was planning to ride into the night anyway. As we jeaded out of Dighton, the wind was relatively calm. But as we continued towards Ness City, a ferocious headwind picked up. Riding side by side, at times we had to shout to each other to be heard. It took us an hour to make the last ten downhill miles to town.

Ness City is a small town of about 1,500 that has seen better days. Like other rural towns in the state, it has clearly suffered from an exodus of population in recent decades. Riding on the cracked main street through town, many of the buildings looked abandoned.

The Derrick Inn, though, appeared to be a relic of Ness City’s heydays. (I recently looked up the Hotel on Trip Advisor, and a recent customer had titled his review, “The most interesting terrible motel I’ve stayed in.”  I understood exactly what he meant.) As we walked inside the door, the wind hushed and we were greeted by a large swimming pool in the center of a grand, empty atrium. At one time, this hotel was probably the nerve (or at least party) center of Ness City.

Even though Ben was planning to ride on into the night, I think he was as curious as me to check out my room. After getting my key from a very nice woman, we entered a large 3-room suite. The first room had blue shag carpet and a large wooden bar. A saggy couch was along the wall. Adjacent was a large bedroom. Then attached, was a bathroom with a giant, new marble bathtub big enough for 3-4 people.

It seemed a shame to only spend a handful of hours in a room with so much promise. But alas, after sending Ben back into the Kansas wind, I did what I always do. I ate some food in bed, set my alarm for about 4 hours later, posted this photo and went to sleep. 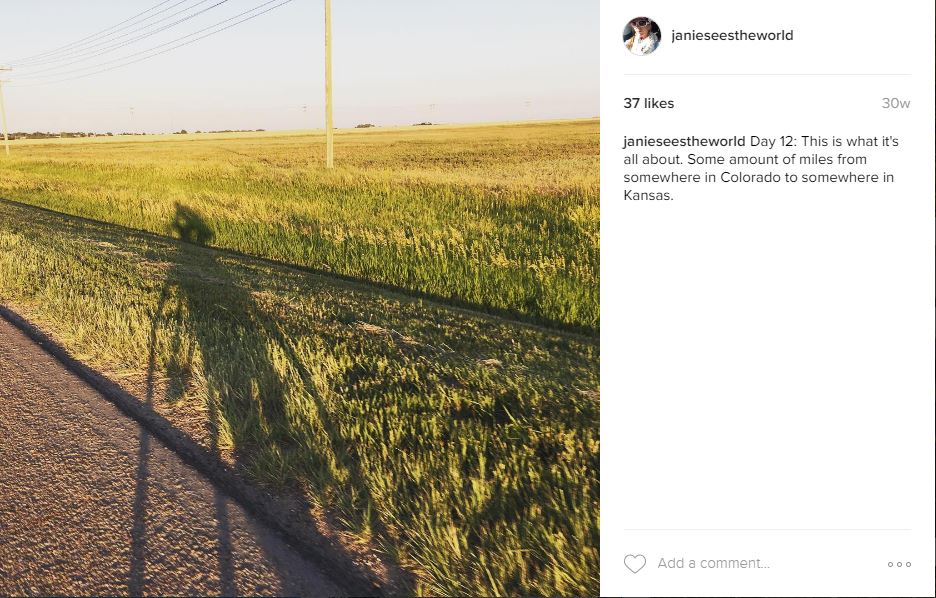