I was up before the sun and at the front door of the Derrick Inn with the swimming pool in my rearview. I had to use both hands to push the door open, due to the wind that was already howling at 4:30am. I got on my bike and pedaled east out of town, glad that, for the moment, the onslaught was coming from the south, and at my side, instead of a direct headwind.

Still, that relief was tinged with certain dread. The first day of Kansas had been no easy feat, and today was unlikely to be easier, maybe even harder. I had my eyes set on Newton Bike Shop, an important waypoint on the TransAm race (and for anyone touring the Trans Am route). During the race, Newton Bike Shop owners Heather and James Barringer offer all racers a slew of services: mechanical support, a mailbox address, showers, food and a place to sleep as they pass through town. Via cameras set up in the shop, they also provide a real-time glimpse of racers as they arrive at Newton, for family and friends watching online at home. Sometimes James complements these arrivals with a – shall we say – “colorful” editorial commentary. 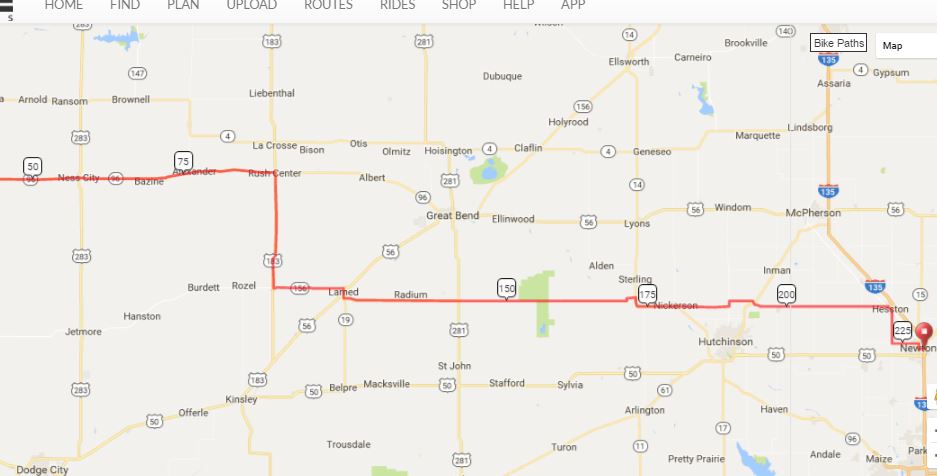 Newton was about 180 miles due east of Ness City – and on another day, that distance might not have seemed all that intimidating. But I left Ness City that morning feeling tired, worn down, and a bit daunted by the day’s ride ahead of me. I knew the heat would be a factor again, and I also knew that there was a long 65-mile stretch with no services, from Larned to Nickerson.

I also figured out pretty early that the day’s one significant right hand turn, at Rush Center, was going to point me directly into a ferocious headwind. I arrived in Rush Center around 7 am, hoping against all odds to find an early-to-rise downtown, or at least a diner serving breakfast that might give me a little boost before heading into the wind. 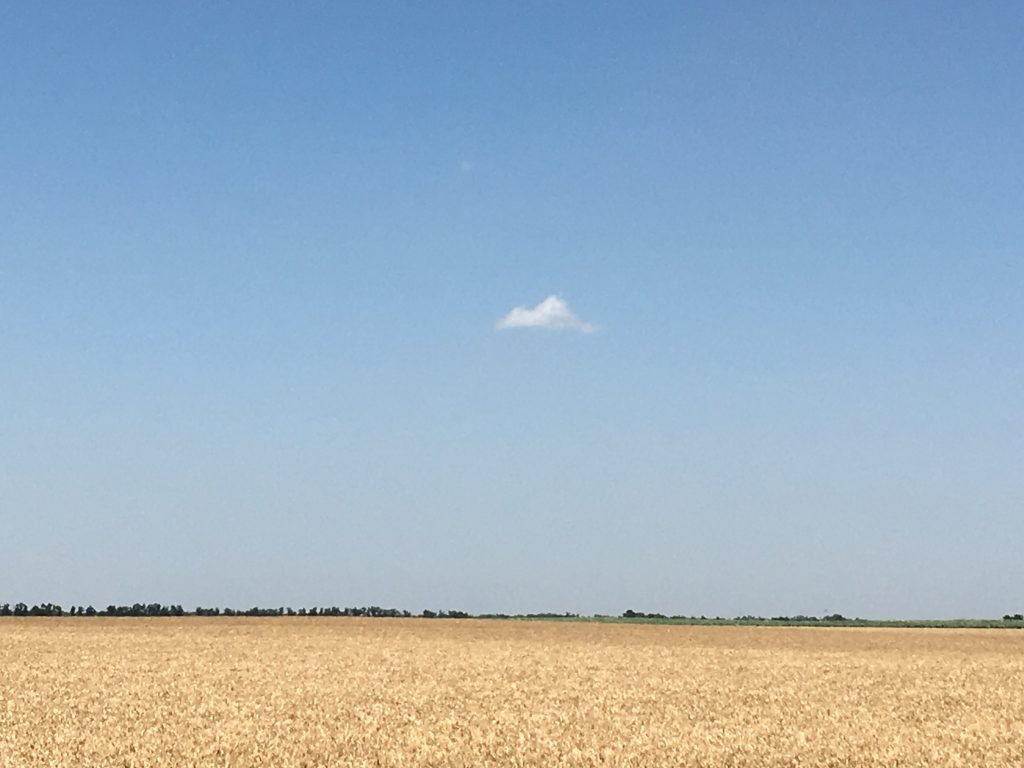 Instead, I found a soda machine on the corner, outside a closed service station. It only took coins. A construction crew was already on the job just up the street, and I harassed the foreman until he was able to scrounge three dollars worth of change from his detail. While three cokes for breakfast might have seemed a depressing prospect at another point in my life, my life situation was different now. As the boss put the coins in my hand in exchange for the bills, my words of thanks were effusive enough to elicit a puzzled, if not slightly alarmed, expression on his face.

While I was chugging cokes in the parking lot on the corner, a Trans Am tourist flew in from the direction I was heading. He had a big grin on his face. “Wow, that was fun!” he said. Then, realizing what direction I was headed, he backpedaled politely. “I mean, it’s only a few miles,” he said.

It was indeed only a few miles. Eighteen, to be exact, which is not a lot in the grand scheme of things. But I was putting up my best fight mentally. All the way from Ness City, I had been dreading this stretch, and as I started, I had that loop of negativity going on in my mind. Nothing even interesting, or witty: just “hate, hate, hate, hate” on repeat. The wind was gusting, so sometimes I was moving at 10mph, other times at 6. Hate, hate, hate, hate.

About halfway through this stretch, my phone dinged with a text from my mom. She was sending me photos from my brother’s wedding, which had been in May less than a month before the race. While I was riding, I opened one of the pictures. There was my whole family – my brother and his new wife Nikki, my sister, parents, Jimmy, my aunts, uncles, cousins, grandpa, grandpa’s husband, Nikki’s whole family – now new family to me. 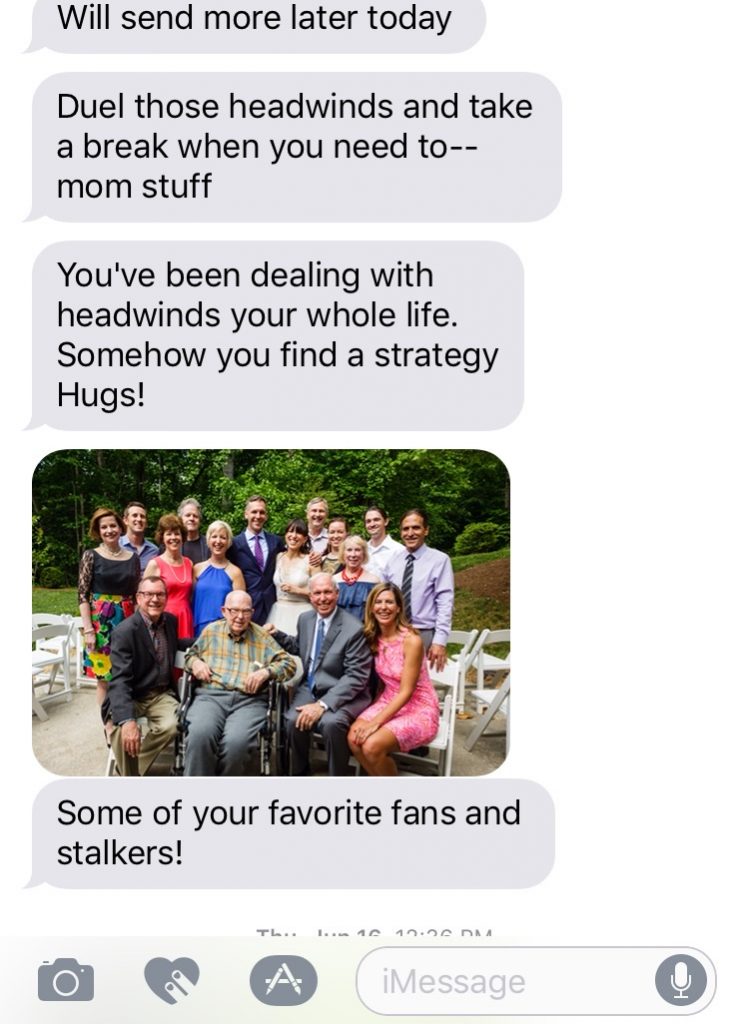 A magic text message from mom.

Suddenly, looking at those photos, something changed in my mind. It was one of those moments where nothing changes, but everything does, simply because you see something differently. I remembered that the world is a big, big place – something much greater than me – and that what I was doing at that very moment – cranking into the wind in Kansas – was a privilege, not a curse or an affliction. I don’t know whether it was a choice, or just a brain chemistry switch, but I went almost momentarily from being hateful to thankful for all that I had in my life.

As I made the left hand turn to head to Larned, I was in a decidedly better emotional place than I had been earlier that morning. I’m not sure whether it was related, but in Larned an extraordinary series of encounters with people seemed to reinforce my newfound faith in the world. In the gas station, a young woman and her mother approached me. She was an avid dot watcher, she said, and she knew me by name. She gave me a hug and wished me well. At the counter in the same gas station, an old man in a pair of overalls and a few missing teeth tried to buy my stack of candy bars, ice creams and cokes because “you look like you need it.” In the Burger King next door, the manager asked me about the race and offered me extra food for free. The woman at the table next to me ran out to her car to get me some extra sunscreen.

The 65 miles from Larned to the next services in Hutchison were hot, and challenging, but I entered it feeling calm. The wind was now a crosswind, and had died a bit, but the temperature was dangerously high. Some of the other racers, including Ben, had decided to sleep during the day to avoid the worst of the heat and ride at night. But I decided to forge on ahead. I was going to be hot anyway, I figured. Might as well not be hot and sleepy both. 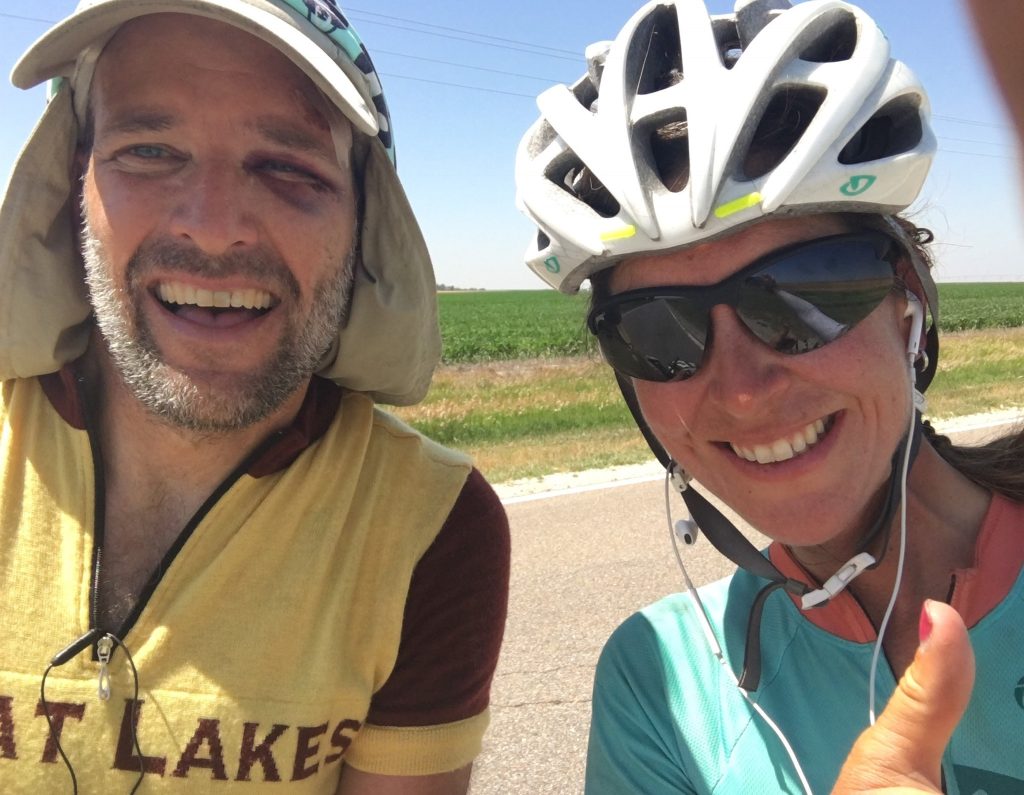 With the amazing Jason Marshall.

Halfway to Hutchison, I saw a smiling rider coming towards me. We both stopped, and he introduced himself as Jason Marshall, the lead west-bound racer who had started in Yorktown and was headed to Astoria. Jason had been hit by a car a few days earlier, and forced to quit the race. Then, Lazarus-style he had re-started and here he was, smiling his way across Kansas. We chatted for a few minutes and he told me about a water spicket at a church several miles down the road. Then we took a selfie, wished each other luck and headed off in opposite directions. (Jason arrived in Astoria as the first of the west-bound racers!)

I rode into Nickerson in the late afternoon, bedraggled once again by the long stretch of sun and heat. On the road into town, I was riding so slowly that I distinctly remember wondering whether I would be able to convince anyone in the passing cars passing that I was a competitor in a bike race. Almost at that very moment, a man on the side of the road called “Go Janie!.” Perplexed, I pulled over. He introduced himself as my friend Travis’ uncle. Travis lives in Washington DC but hails from Kansas, and he had sent his uncle out to say greet me. An endurance athlete himself, he had all kinds of questions and words of encouragement that inspired me to make only a short stop in Nickerson and hit the road for the last 50 miles to Newton.

I was more exhausted on that stretch from Nickerson to Kansas than I had been in a while, and maybe for the whole race. My legs didn’t work, and every mile felt like an eternity. The distance was moving by so slowly that I kept checking my Garmin to make sure it was working. I checked my tires to make sure I didn’t have a flat. I checked my brakes in case they were rubbing.

I also stopped to take a lot of photos of the sunset. The sunset was indeed beautiful that evening, warranting the stops – but it was also a good excuse to stop and get off my bike. At twilight, I was nearing Newton when I made a wrong turn. It was only a couple of miles, but it felt like an eternal detour. 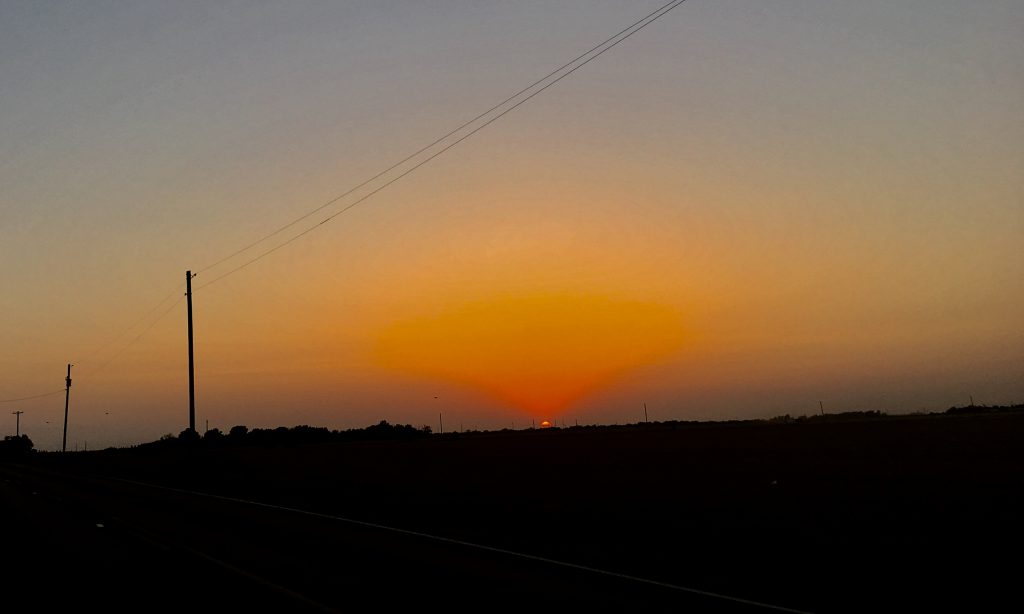 Kansas sunset. (It truly was beautiful.)

After another stretch of forever, I rolled into Newton’s downtown district in the dark. So relieved was I to have made it to Newton, that I forgot what I was doing, rode all the way down the main street and out the other side of town before I realized I had overshot my mark. Flustered and confused, I turned around and was immediately stopped by a passing train.

I’m pretty sure I was laughing at the absurdity of the day when I pulled up outside the bike shop. James was waiting outside, and another visiting non-racing cyclist was cooking burgers on a grill. Stepping into the air conditioned shop was surreal. I handed my bike over to James, who was going to check my tires for wear and change my rear cassette out from an 11-28 to an 11-32 in anticipation of the steep hills of Missouri, Kentucky and Virginia. Immediately, however, he was horrified by the indescribable molds and bacteria festering in my water bottles. As Heather hurried me away to her car to drive me to her house for a shower, I could hear James, talking to the online camera, “I hope the health inspector doesn’t drop in, because I would lose my license for sure. These bottles are RAUNCHY…”

The sensation of being in a moving car was incredibly disconcerting after nearly two weeks moving only at a bicycle/snail’s pace, and I gripped the car door handle while Heather drove. After I had showered, she took me back to the shop, where I ate a great dinner in the kitchen and had a short massage. Around 1am I laid down to sleep in a bunk bed in a dark room in the back of the shop. Heather said they would wake me up in four hours. I posted this photo and fell into a deep, deep sleep. 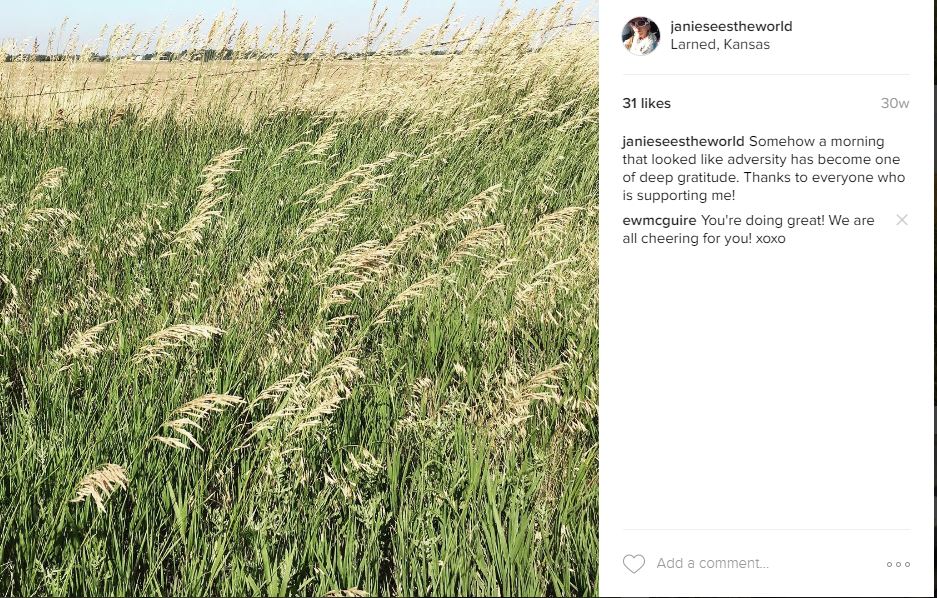