The stop at Newton was both a blessing and a curse. A blessing because of the nice people, good food, air conditioning, cold beer, and warm bed. And a curse for all the same reasons. Truly racing the Trans Am is all about time management, and getting too comfortable can be a dangerous thing. I was aware that I had been wooed by the abundance of riches Newton had offered. Ben had come in and gone while I was sleeping, putting him several hours ahead of me. And as I left, Bo Dudley was not too far behind. I needed to get my head back in the game.

It was light by the time I got on the road, and – despite wearing a clean jersey and being well fed – I was bummed because of it. Over the last two weeks I had found that I was only able to begin the day satisfied when I got on the bike in the pre-dawn darkness. Only then did I feel like I had “enough” time to do what I needed to do that day. On those days, I could often knock out 100 miles before mid-day, which gave me a sense of efficiency. It sounds odd, but the feeling was similar to the satisfaction of crossing off items on a to-do list during a focused, productive day in real life. “Miles ridden before noon” was an odd metric, but it was the one I happened to be measuring myself by these days.

In Cassoday, I stopped to refuel at a gas station. There was an antique car rally coming the other way, and the drivers were congregating at the gas station. I stopped to watch them for a while and got chatting to Karl, a Trans Am tourist who was headed east to west. He asked if he could take my picture. In the photo I look as clean and fresh as I was, but that smile also belied the anxiety I was feeling that morning. 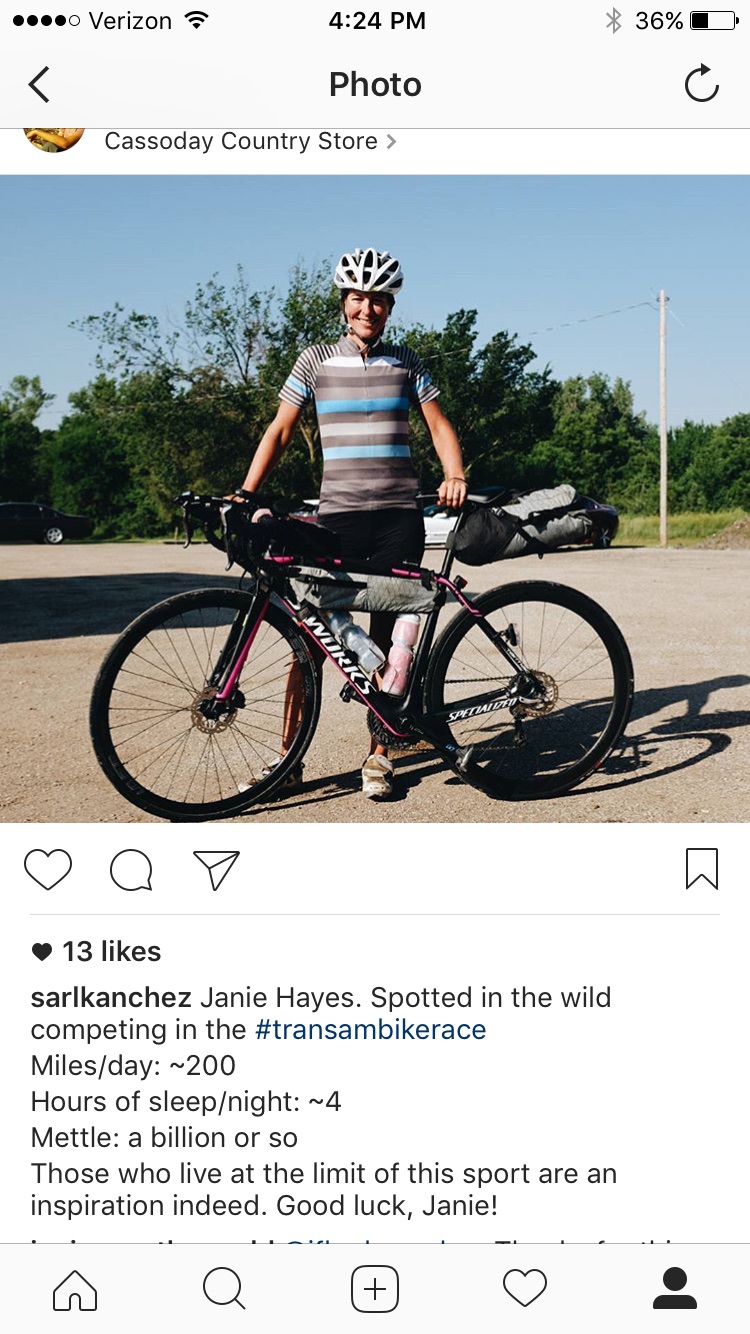 I tried to brush those feelings aside as I headed into eastern Kansas. The wind today was not ripping like the day before, but the heat promised to be a real issue. Also, another thing I hadn’t predicted about Eastern Kansas: hills. As if a subtle warning to Missouri, still a couple hundred miles ahead, the landscape begins to undulate – gently at first, and then increasingly requiring attention.

About 60 miles from Newton, on a hilly four-lane highway, my back tire flatted again. This was the fifth flat on that back tire. And despite the fact that neither James nor myself had been able to locate any defect in the tire, I decided enough was enough. I needed a new tire. A quick search told me that the next bike shop was in Pittsburgh, about 200 miles east. The closest was the one I had just left, 60 miles behind me.

I called James. He was willing to send me a new tire, but wasn’t sure how long it would take. He offered that I could wait for Bo Dudley, who was at the shop at that time, to bring it to me. “No!” I screeched into the phone. For the past few days I had been struggling to keep a measurable distance between me and Bo. The last thing I wanted was to wait for him to catch me. I was doing my best to compete, but I was in no condition for a race.

Eventually, James found someone who was willing to drive the tire to me. I made it to Eureka and waited under a shaded umbrella at the Sonic on the corner. This day was demoralizing me, but I tried to believe there was some redeeming quality to the forced rest. I was having, after all, a “Eureka moment.” I ate a bacon cheeseburger and drank a large cherry-lime slushee. I laid down on the concrete bench and tried to sleep.

In less time than I expected, two friends of James showed up with my new tire. It was a bulletproof Continental Gatorskin, and with it securely on my back wheel and the offending tire gone, I felt a great sense of relief. I hoped my tire issues were now behind me for good. 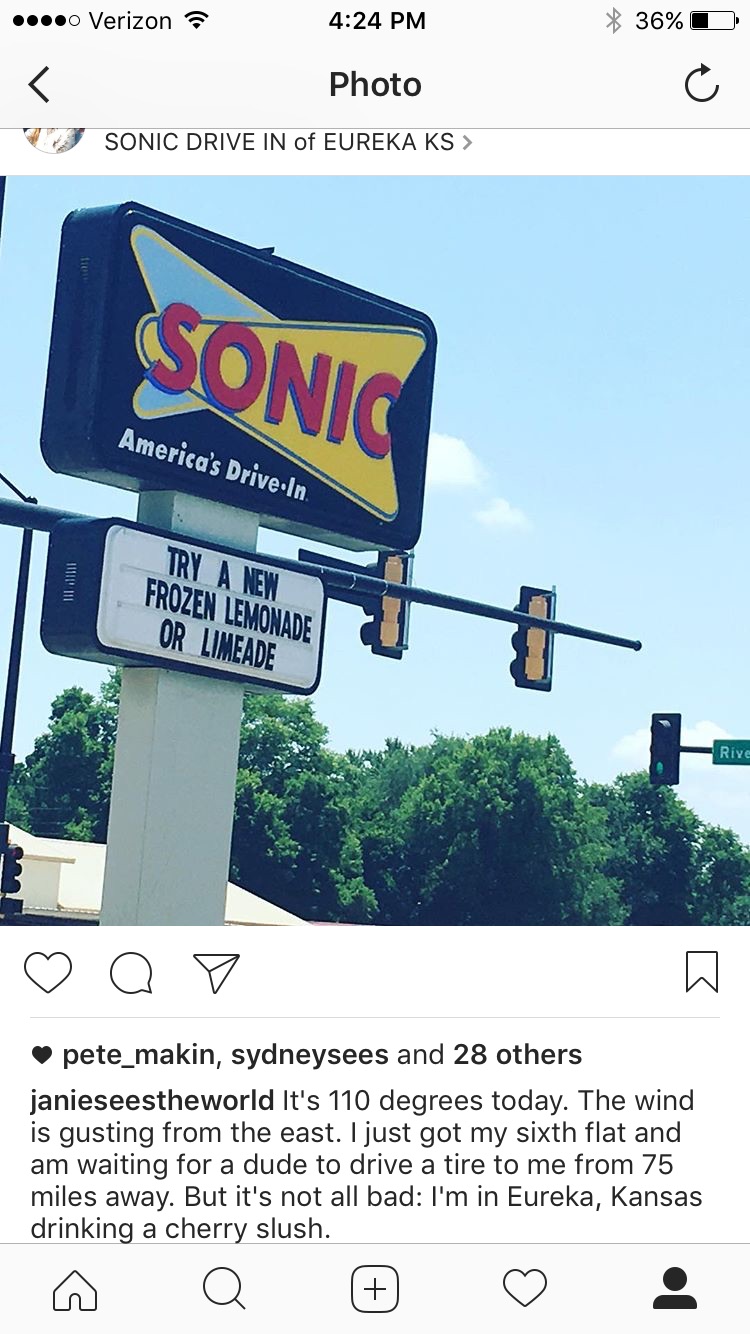 By now it was mid-day and the sun was blazing down as I made my way east. My Garmin registered 114 degrees this afternoon. I spent the afternoon searching for shaded structures – a tree, a rest stop bathroom, a signpost – to stop and cool off. An hour or two after leaving Eureka, I stopped at a bait and tackle shop before making the turn to Lake Ontario. An elderly man and woman sat playing cards In the dark, low-ceilinged shop. The owner got up slowly, showed me his Trans Am log book filled with notes from years of Trans Am riders, and asked me to sign it. 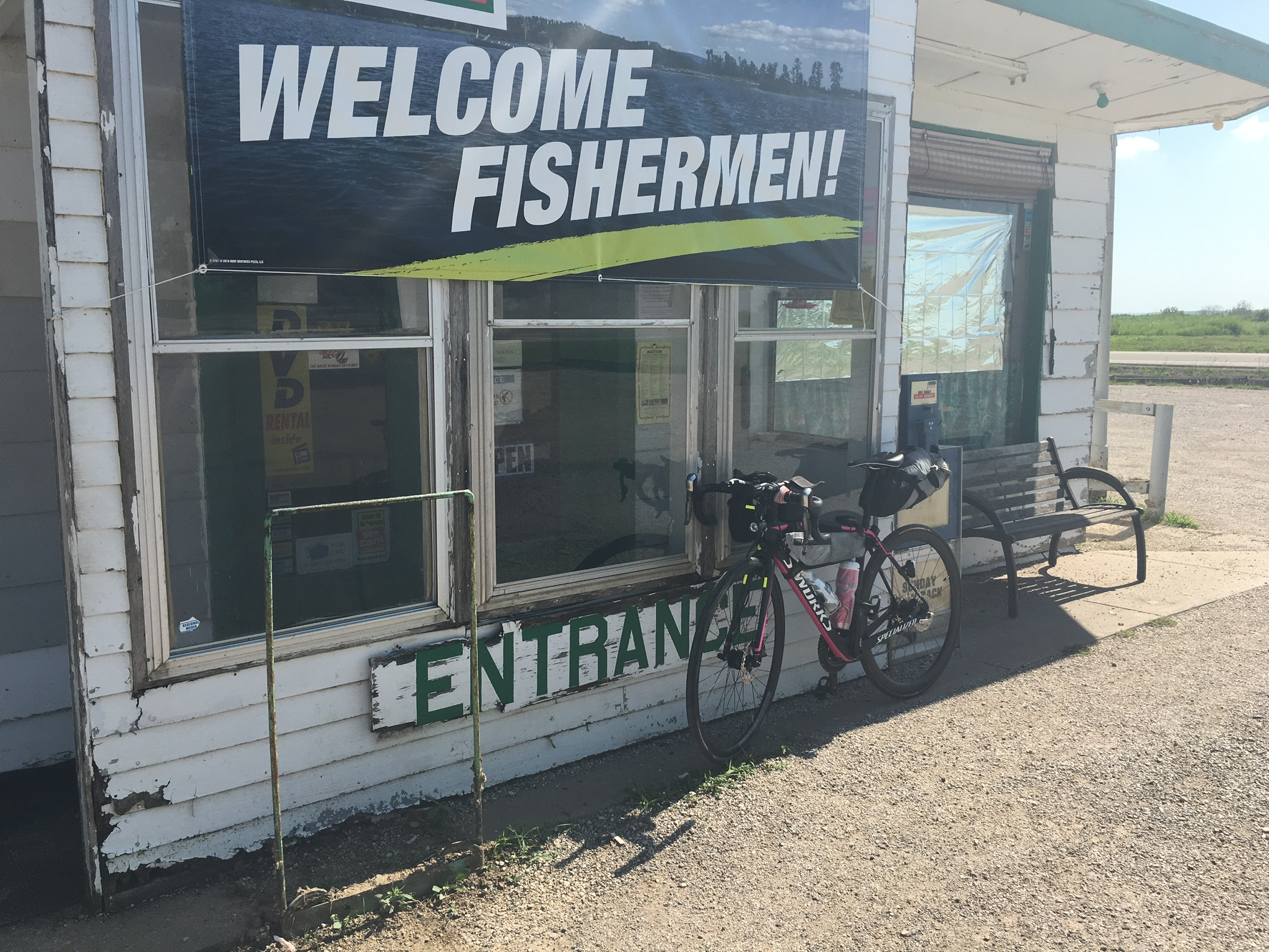 I payed for my food and extra water with my debit card, then stepped outside, squinting into the afternoon sun. In stark contrast to the busy highway miles I had been covering for most of the day since Newton, the road suddenly became hilly, rural and lonely. About 10 miles after leaving the store, an old white pickup truck pulled up beside me. In it was the shop owner, grinning and holding my debit card. I was touched by his kindness and thanked him profusely, slipping it in my jersey pocket.

Only a few miles later, I came across a river crossing shaded by trees. I pulled over next to the river to enjoy the cooler temperature for a moment – and took the opportunity to pull my phone out of my jersey pocket and change the music selection.

I realized my carelessness just a few minutes later, when I reached back to see where my debit card was. The card was gone. I went back to the river and looked around, but no luck. The card must have fallen into the river and was already making its way downstream.

The rest of that day was marked by a distinct, but involuntary, pattern: “ride, rest, ride, rest.” Unlike in days before, I didn’t feel like I had any control over when my rest periods came. Instead, they overcame me. One moment I would be riding my bike, and the next, find myself sitting just off the road in the tall grass – unaware of any conscious decision I had made to stop and take a break. 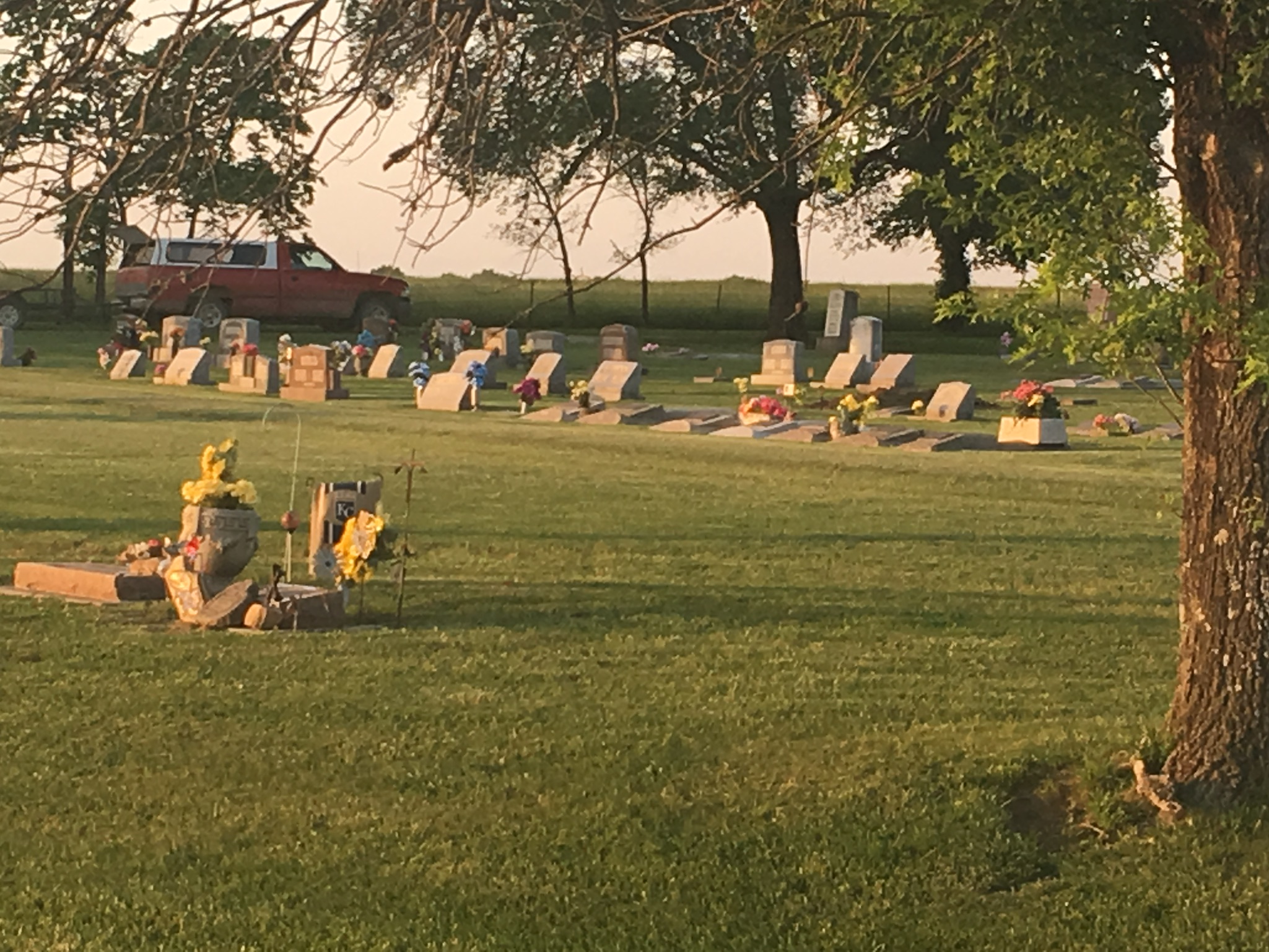 A fitting rest stop that afternoon.

I called my friend Jill as the sun went down. She could hear the exhaustion in my voice and she urged me to stop and sleep. Eat, sleep, she said. And because I had apparently become a robot that day, I obeyed. Just after dark I rolled into Chanute, where, right away, another of the many big-hearted characters of Kansas offered to buy my food at a gas station. I waited on my bike in the drive-thru at Sonic and ordered my second and third bacon cheeseburgers for the day. Then I went across the street to the fleabag motel and got a room.

The day’s heat, my late start, and the tire delay had meant I had covered less than 140 miles on the day, the fewest miles of my race yet. Still, Kansas was almost finished and tomorrow another chapter in the race would begin – in Missouri. I set my alarm for early, posted this photo then went to sleep. 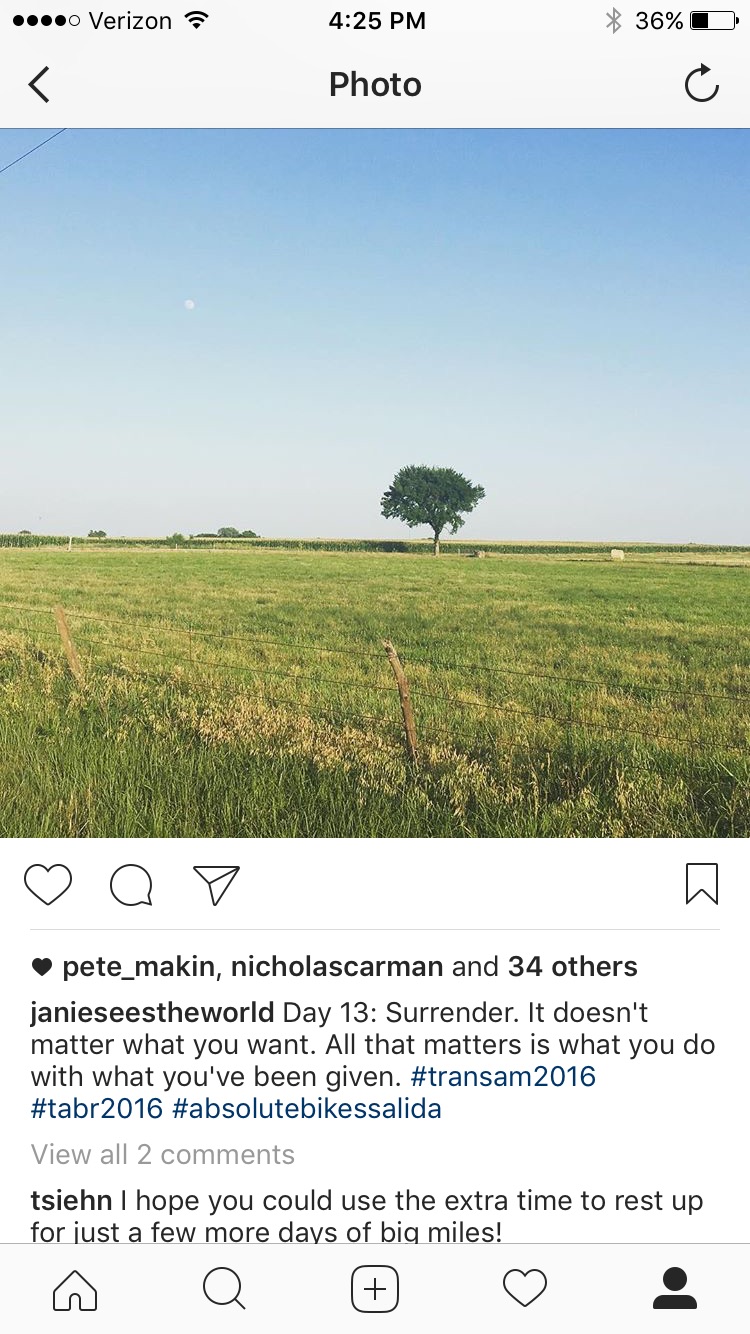