I woke up and rolled out of bed at 4am, while it was still dark. Before I left my motel room, I checked Track Leaders. Bo Dudley was only about 10 miles from Chanute, just on my tail.

Out on the road, it was warm but not too humid or windy. I was happy that I would be exiting Kansas early in the day. Kansas had been hard for me. I wasn’t sure whether it had been Kansas’ terrain or weather that had made the last 2 days feel so hard — or whether the cumulative fatigue of two weeks of all-day riding with very little sleep was simply catching up with me. Despite averaging about 200 miles per day for the first 12 days of the race, I had not been able to crack 200 miles either of the last two days. Was this a downward slide that I was powerless to resist? 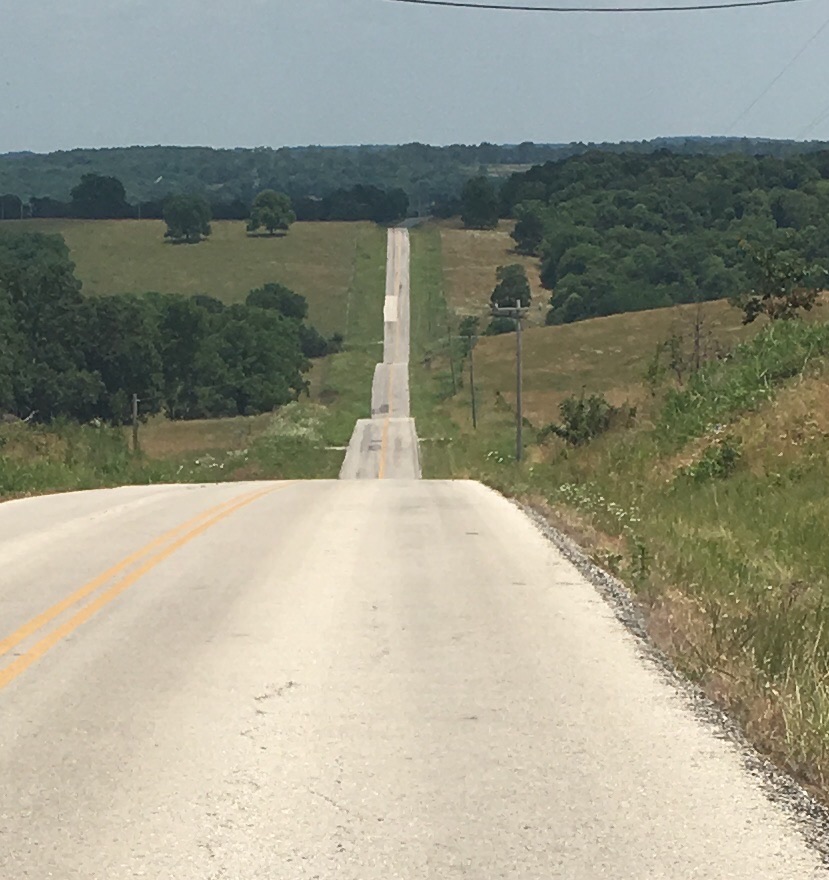 I didn’t know. And while I was happy to leave Kansas, I wasn’t quite sure what to expect in Missouri. During mid-morning, I saw two riders coming towards me. They waved and I went across the road to meet east-west pairs riders Ken Simpson and Terry Roe. They were in good spirits, though they had faced their own challenges traversing the mountains of the eastern US. We chatted for a few minutes, wished each other luck and carried on in our own directions.

I rode on through the gently rolling landscape, through Pittsburgh and across the Missouri border during the mid-morning. Almost immediately after crossing the Missouri border, the landscape began to change. The hills were a bit steeper and the fields more green.

Also, my di2 battery – which charges the electronic gearing system on my bike— was almost out of juice. This meant that not all of my gears were working; in fact, I could only use the hill climbing gears, which was a problem on flattish terrain. Di2 batteries have variable running times before they need to be charged, and I could generally expect to ride about 2,000 miles before needing to recharge. The last time I had fully charged the battery was in a hotel room back in Twin Bridges, Montana, so it wasn’t unusual that I was due for a charge.

However, there was another related logistical problem: The USB attached to my Dynamo hub – a battery built into the hub of my front wheel that generates electricity while the bike is being pedaled – was also no longer working. For the first 10 days of the trip, I had been able to use that USB port to charge electronics while riding – my phone, light, Garmin and di2. However, a problem with the connection had made the USB inoperable.

I pulled over to the side of the road to see if I could come up with a plan. As I was standing in the grass, Adi and Niel Coventry-Brown, another east-west team from New Zealand, pulled up. They were sympathetic and offered help, but I told them I would figure it out. They were both thrilled to be out of the mountains, and they told me horror stories of how steep the hills were in Missouri, Kentucky and Virginia. I was happy for them – but still tried not to hear what they were saying. I was tired enough as it was.

It was only about 10 more miles to Golden City, where I found Cooky’s Café, a popular Trans Am route. It was Saturday of Father’s Day weekend, and the café was packed with families having lunch. But the owner let me bring my bike inside and plug it into an electrical outlet behind a bench in the waiting area. I ate a piece of pie while I waited, and ordered a second one to go. I had to crunch the Styrofoam to fit the pie in my jersey pocket as I left – I hoped I hadn’t ruined the whipped cream. 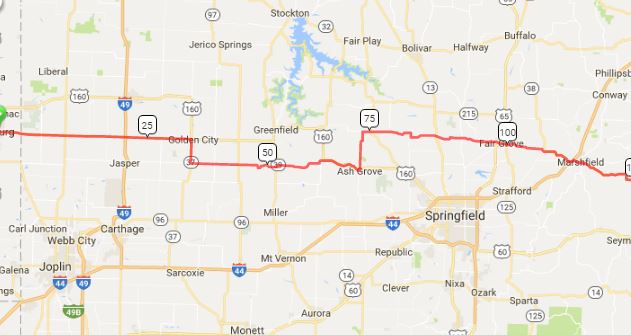 Just north of Springfield Missouri, the road began to change even more, becoming less straight and more winding. I would encounter the Ozarks soon, I know, and this must be the warmup. During the later afternoon, I stopped in Walnut Grove to refuel. I asked the clerk if there was a city park, and she pointed me just down the street. There was a pavilion in the park with electrical outlets, so I plugged in all my devices, then lay down in the cool grass and slept for an hour. 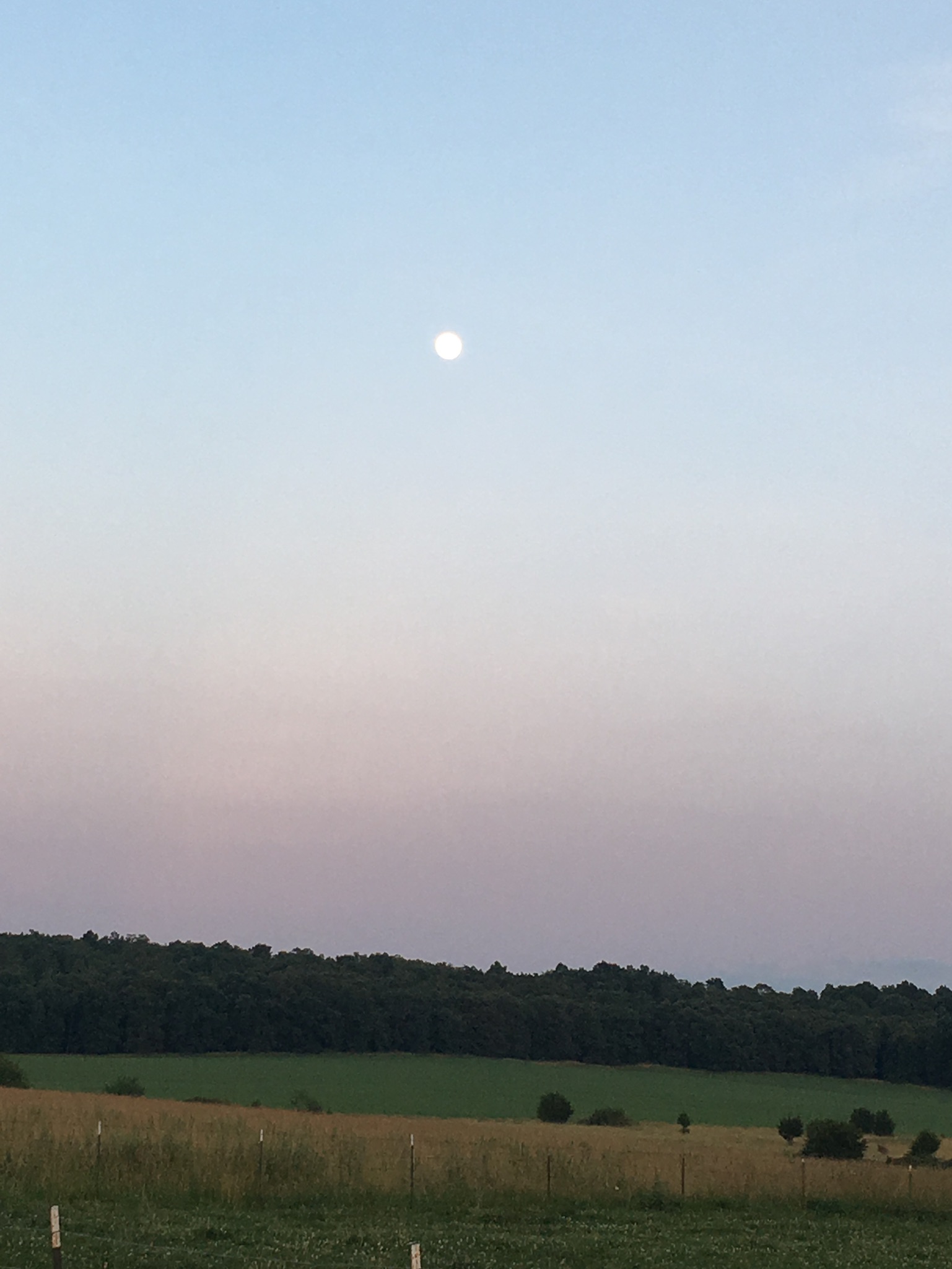 When I woke up, I was groggy and confused. I got back on my bike and hit the road. A few hours later I came into the interstate town of Marshfield, Missouri. There was a Holiday Inn Express there, which was expensive. At the time I was too tired to even care.

I hit the McDonald’s next door and then checked into the motel. I sat on the floor and took stock. For the third day in a row, I had failed to make 200 miles on the day – and this all in the flattest part of the entire Trans Am route. Tomorrow I would face the Ozarks, and I knew that was just the beginning of the onslaught of mountain climbing that would continue until the last day of the race. In fact, the four easternmost states of the Trans Am route (Missouri, Illinois, Kentucky and Virginia) have more combined elevation gain than Oregon, Idaho, Montana, Wyoming and Colorado combined.

I was still in ninth place, but Bo Dudley was quickly still approaching behind me. Several other riders were still not far behind. I was going to need to find something deep inside myself – and quick – to finish this race in the top ten.

I set my alarm for 4am, posted this photo and went to sleep. 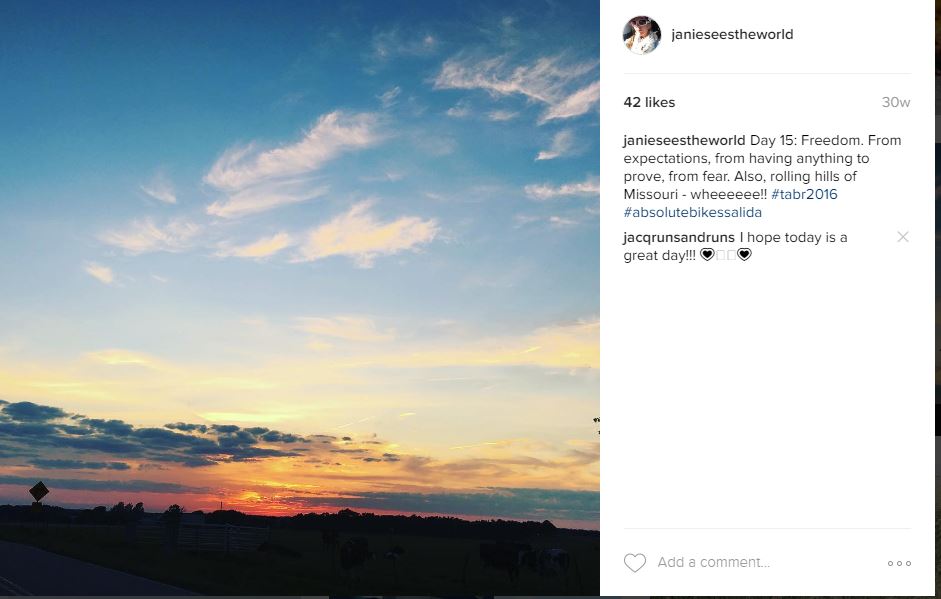