I packed up and carried my bike down the carpeted staircase of the Holiday Inn Express to the quizzical looks of the early-morning desk clerk. I rolled across the giant parking lot off the interstate in Marshfield and back onto the route.

Something different needed to happen. After what I considered three lackluster riding days, I needed to regain the determination that would allow me to ride this race successfully. For me, that meant both pushing my limits and being in control of my own race – not letting external circumstances dictate either my actions or my perceptions of myself. Two weeks into the race, I now understood that the ability for mental focus – hour after hour, day after day – was the elemental skill that this race demanded. This is not to downplay the physical requirements that racing the Trans Am requires – like being strong and fit, having the endurance to make the distance, knowing how to prevent injuries, managing physical maintenance like eating and sleep. Those things are all critical too. But above and beyond those more measurable skills, it was becoming clear to me that mental fortitude – while not as quantifiable – would be the difference for me between “finishing” and “finishing satisfied.”

I knew I would have to start right then to draw on those mental reserves for the upcoming section of Missouri. The Ozarks were coming. As I moved farther away from Kansas, the green lushness of the Ozarks was a welcome sight. But it came with its own nuisances; in particular, the increasing grade of the hills. At first, I could handle the rises simply by concentrating on using momentum from the downhills and then standing and powering over the top of the next rise. This part was fun, kind of a terrain roller coaster. As the morning wore on, though, the rollers became steeper, and momentum was only marginally helpful. First, it could get me 75% of the way up a hill. Then 50%. Then 25%.

It was also another brutally hot summer day. In Eminence, Missouri, I stopped at a gas station that had a small sandwich shop. I got a coke and sat down at a table by the window. Another cyclist was sitting just in front of me, but he didn’t stop to look when I sat down. A few minutes later, though, I felt a tap on my table, and he motioned me over, wordlessly. He pulled out his Trans Am maps, pointed and smiled. I nodded, confused. It took me a minute to realize he was deaf.

I pulled out of Eminence into the heart of the Ozarks parkway, a bit more inspired. But the hills soon became a chore again. I had to take one at a time, working up and over each with intense concentration. At one point, my heart rate was soaring and my pace was so low that my Garmin was switching to auto pause – and I wondered, as humiliating as it was, whether it might not be more efficient to walk. On the next hill I rolled up as far as I could, then swallowed my pride and got off my bike. Unfortunately, the air was so hot that it was melting on the pavement and as I walked, black sticky sludge filled my cleats. At the top of the hill, I stepped off the road into the grass, exasperated, to dig the tar out of my cleats – and immediately was stung by a swarm of bees.

Okay, no more walking then.

The afternoon went on, through the hills and green remoteness of the Ozarks. In the early evening, I made a long climb out of Johnson’s Shut In’s State Park and gradually back into civilization, rolling through the small burgs outside of Farmington. As I rode towards Farmington, traffic picked up, with an inordinate number of pickup trucks gunning their engines and laying on their horns as they passed.

It was 10pm when I hit the outskirts of town – and I was surprised to hear my name called from the side of the road. When I stopped, the woman who had called my name introduced herself as Jeneen McEntire, Brian’s wife. I was so touched by her thoughtfulness in coming out to greet me that I gave her a big hug. She was so encouraging and said she would be cheering for me. Just up the road, another one of Brian’s cyclist friends was out to greet me. He advised me to hit the McDonald’s, since not much would be open in town. He asked if I was staying in town, and without thinking I said no, that I would keep riding on. He seemed as surprised as I was to hear my answer.

In McDonald’s, I settled on my plan. I would ride to Chester, which was about 40 miles east of Farmington. Checking TrackLeaders, Massimiliano Fancoli had stopped there for the night. If I rode straight through, I could make it to Chester about 2am. I could check into the hotel there, get a few hours of sleep, and then hopefully be hot on the tail of Massimiliano – who I came to think of as his dot’s acronym, “MF” – in the morning.

Leaving McDonald’s, I felt energized. Pedaling through downtown Farmington, with all the shops and restaurants shut down for the night, I felt like I was getting away with something. Some sense of freedom was opening for me – the realization that I was out in the world, alone, exploring the unknown – and that was exciting. I don’t know why the feeling was so strong in that moment, but I wanted to be open to it. And ride it for as long as I could.

The road to Chester was undulating – and very, very dark. I talked to Jill, who was still up and willing to keep me company at midnight, and Donncha, who was already headed to work in the Netherlands. They both acknowledged what a massive day I had just had – with 240 miles and over 12,000 feet of climbing – and encouraged me to continue to push myself as much as I could. 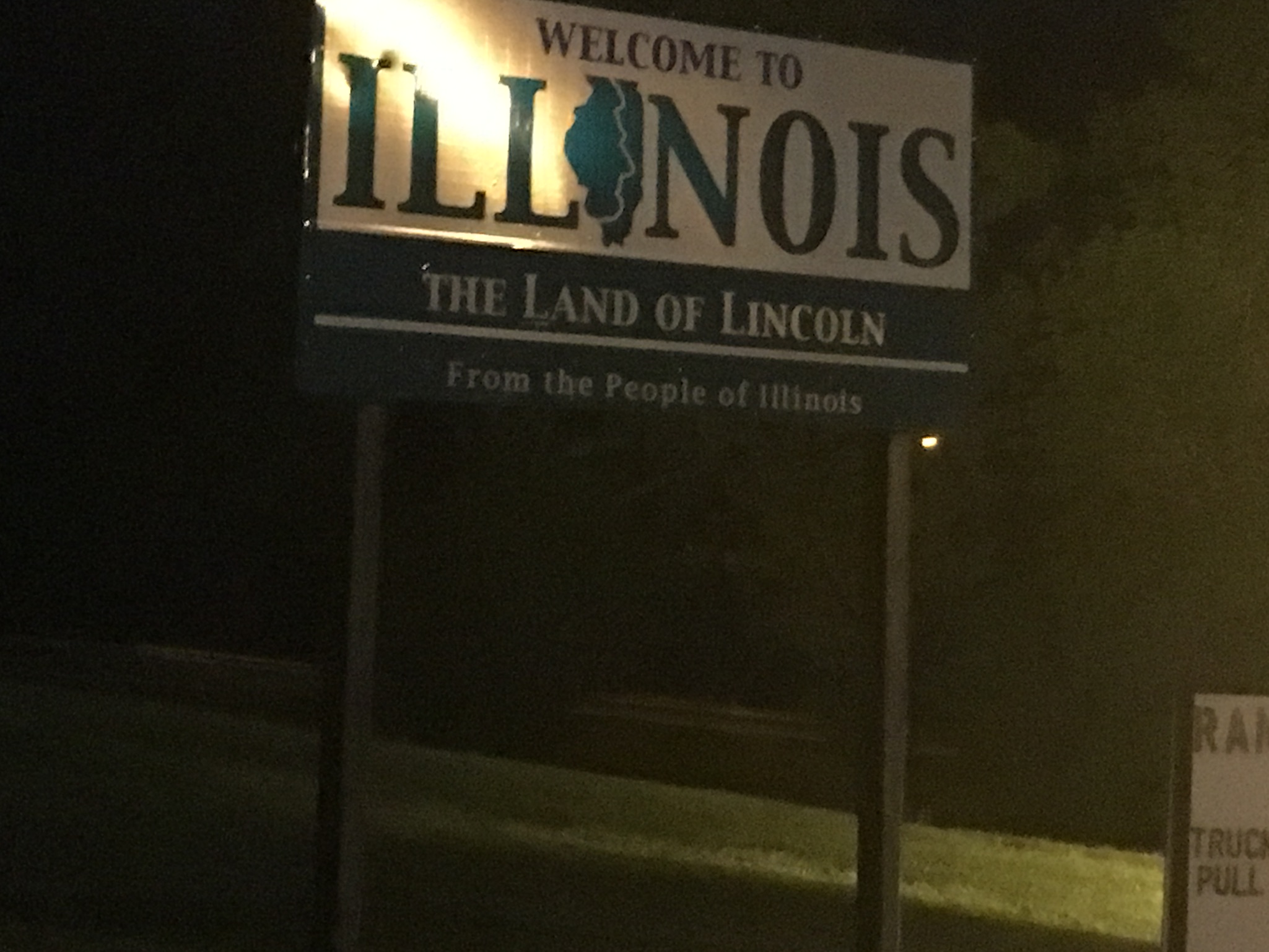 I rolled across the Mississippi on the long, eerie truss bridge and into Chester, Illinois. The Chester “Home of Popeye” sign and the Illinois state sign sat side-by-side on the far side of the Mississippi at the entrance to town and I stopped to take photos and take in the view. It was 2am and I had been riding since 4am the previous morning, but I was energized. It had been my biggest riding day yet, MF was within reach, and most importantly, my mindset had changed from uncertain to confident in my abilities. 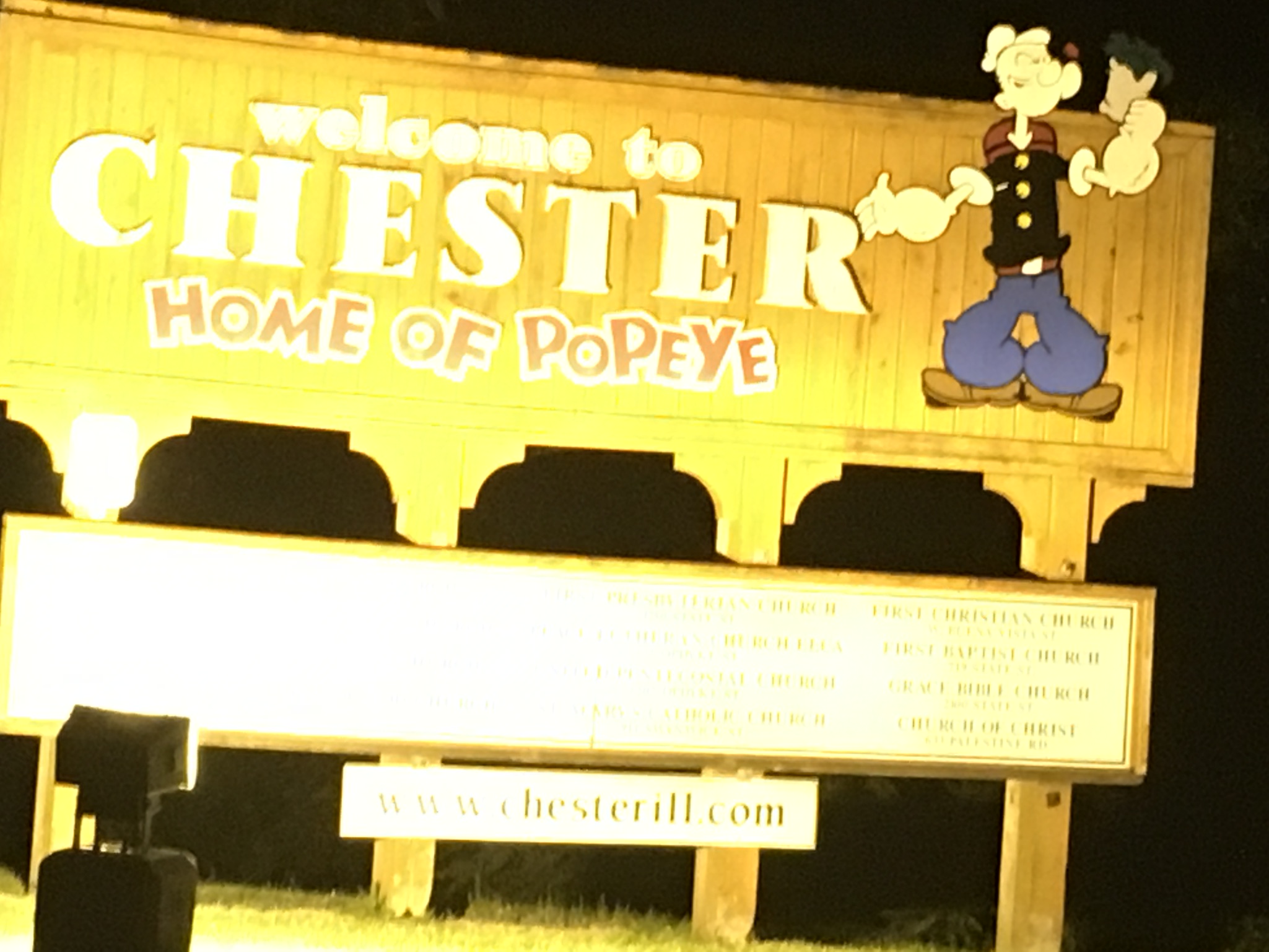 I took a right just past the bridge, cruised down a long, steep hill to the river – and immediately realized I had made a wrong turn. I climbed slowly back up to the bridge and headed the right way to the hotel, which turned to be another several miles down the road. It was a little early for celebrations, I thought.

Still, I had made it. A bed had rarely looked that good – and beds had been looking pretty good recently. I set my alarm for three hours of sleep, posted this photo and went to bed.