When my alarm went off at 3am I didn’t press snooze, so as not to wake my fellow church couch-surfer. I rolled out of my sleeping bag, sweating. I was already wearing my smelly cycling clothes so it didn’t take me long to find my bike next to the sanctuary, pack up and roll out into the Kentucky morning air.

I fueled up at the gas station in town, taking the time to drink a large cup of black coffee from a paper cup. The clerk was restocking pickles and she gave me a few quizzical looks as I chugged and shoved apple pie into my face. Some teenagers were making trouble in the parking lot, and as I rolled out they screeched out of the parking lot in their cars the opposite way.

Despite the coffee, as I rode through the dark I was strugging to keep my eyes opened. The toll of the 17 previous days was now undeniable. Still, I was on my bike, moving forward. I sang to myself, talked out loud, did math problems – anything to occupy my brain that craved only to be still, quiet and asleep.

That morning’s sunrise was one of the most fantastic I saw on the entire journey – or at least I remember feeling euphoric to see it. After over two weeks on the ride, I was becoming more comfortable with the emotional equivalent of Newton’s third law – for every action, there is an equal and opposite reaction. I was now gaining the ability to notice the feelings of despair and exhaustion and identify them as precursors to elation and joy. And vice versa. The reality was that when there was a down, an up would follow shortly thereafter. Likewise, every feeling of progress or accomplishment would at some point, likely in short order, be accompanied by an equal feeling of failure or loss. 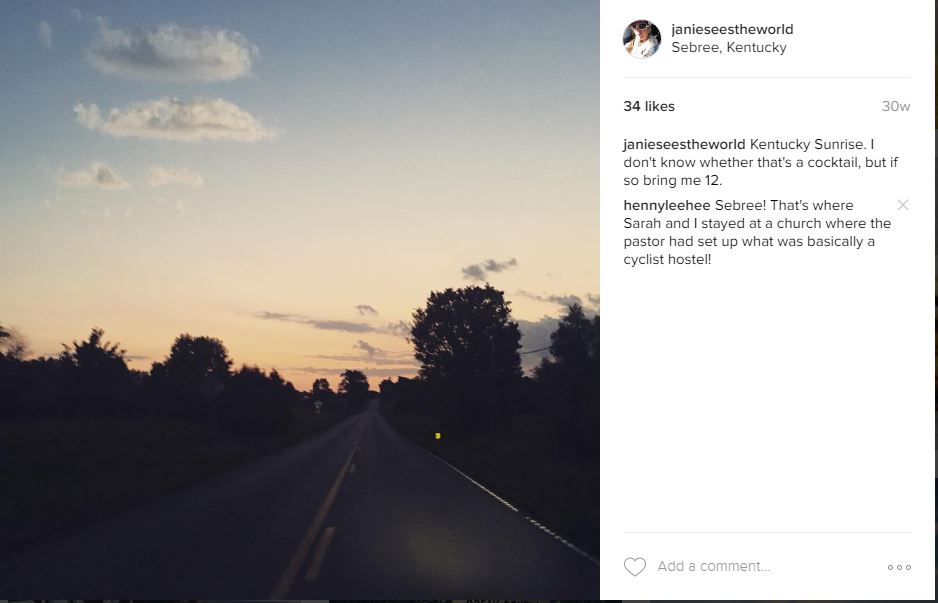 This day is a bit of a blur in my memory, fueled as it was by adrenaline and exhaustion. The terrain had settled a bit for the time being, and the route meandered through multiple towns that populated the western and eastern sides of Interstate 65. There were a number of communities of similar small, clapboard homes clustered together, and I remember having the odd sensation all day that I had ridden earlier through the very place where I was now.

Despite the sleep deprivation, I had made good time during the day. By the late afternoon, when I checked TrackLeaders, MF was only about 40 miles ahead of me. My all-nighter to Chester had definitely cut the distance between us, and it had now been holding steady for about two days. In Howardstown, 175 miles into my day, I made a bold decision: I would ride all night to try to catch him. If he stopped to sleep in a town, I would try to ride past him. If I couldn’t do it, so be it. But there weren’t many days left to make a bold move, and this was a race after all. I had to try.

In the Howardstown gas station, I packed my things and chugged a Rock Star energy drink. Then I got in my aero bars, cranked up Sia and rode as hard as I could. The sun was setting as I rose past fields and up and over small hills. The excitement of deciding to try to catch MF had energized me and given me a newfound focus. 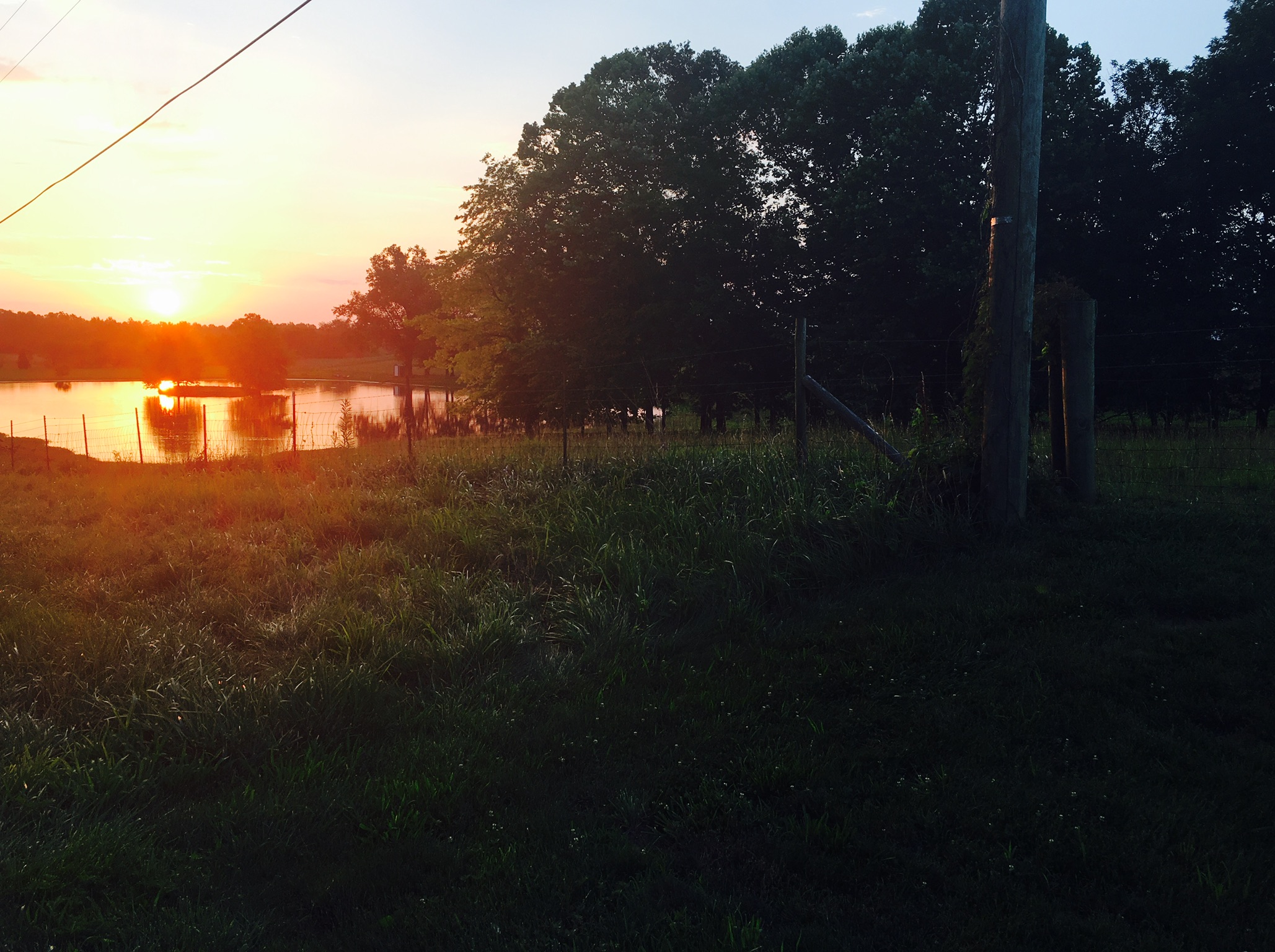 When the sun set, my energy and excitement started to wane. I called my friend Sandy, and I was talking to her when I saw the looming lights of the bourbon distilleries just outside Bardstown. Bardstown was my last chance to refuel until the next morning, so it was critical that I load up food and water for the night. I pulled off at McDonalds on the right side of the route, but got irritable when I saw the wait was long, and rode down the road, sure I would find another place to stop. Unfortunately, the only other food stops were miles off the route and down a busy highway. Instead of going backwards to McDonalds, I ended up riding down this dark, four-lane highway to a grocery store, and wasting about 45 minutes in the process.

Standing in the grocery store, I remember a sense of being deeply overwhelmed. I didn’t know what I was looking for – much less, what I was doing. How was it that I had found myself, disheveled, smelly, exhausted and out of sorts in a grocery store at midnight in the middle of Kentucky, chasing an Italian dot? Was this really my life? In the end, I dispensed with the existential angst and bought Oreos and cokes. Then I repeated every meaningless pedal stroke to take me back down the busy highway to the route.

I could see on TrackLeaders that MF had stopped to sleep in Harrodsburg, almost exactly 50 miles from Bardstown. Doable, I thought. I could reach Harrodsburg around 3-4am. Then, if I was feeling good, I could ride right through the town. By the time MF got riding, I would be past him, and into eighth place in the race. Pondering this idea, I had to admit that I wasn’t sure what would happen after that. But I would cross that bridge when I came to it, I decided.

The ride from Bardstown to Harrodsburg that night will be forever imprinted in my brain. The terrain was a series of steep hills, roller coaster up and down, and the roads wound up and down and around like a thread. I called my friend Connell, who told me funny stories and gave me some words of encouragement. I went back to singing to myself, and trying to do math. 45 miles to go, 40, 30, 20. 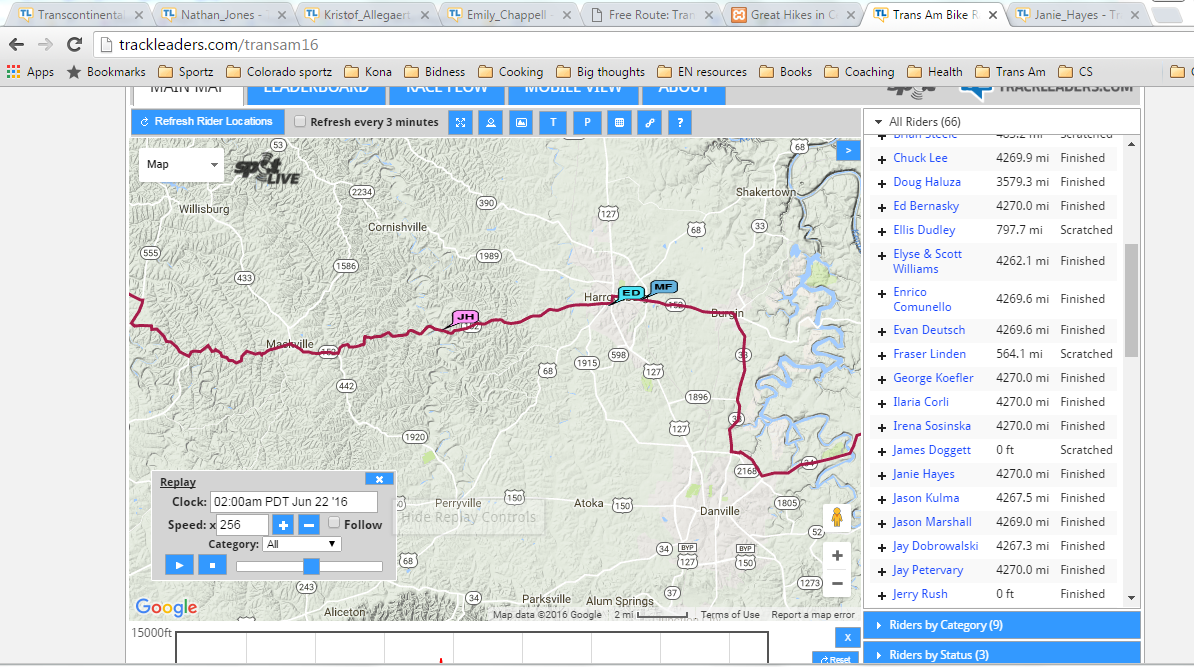 About 2am with only 20 miles to Harrodsburg, I got off my bike. I was so tired that it was becoming dangerous to ride. Sleep seemed so delicious that it was actually unfair to deny it a chance to take over my body. I spread out my bivvy on someone’s grassy front yard, not 20 feet from the street, laid on top of it and fell asleep.

An hour later, I woke up with that desperate feeling of having just missed a college exam. I checked TrackLeaders and MF was still in Harrodsburg. There was still time! I jumped on my bike and started pedaling ferociously.

My gears wouldn’t shift. It slowly dawned on me that my di2 had died again. I stopped and ripped all my electronics out of my bag looking for a portable battery, in the process spilling everything on the dark road. My battery pack was dead, which meant that I had no choice but to find wall power to plug in my di2. Until then, while I could spin up hills, I didn’t have any gears to wind up speed on the downhill. It was only 20 miles to Harrodsburg, but it was going to take an eternity to get there.

Spinning slowly, exhausted and frustrated, I scanned every building I passed, searching it like an electricity bandit. Was that an outlet on the front of that church? Could I sneak into that person’s garage? Suddenly, 10 miles from Harrodsburg, I spotted the glowing lights of a soda machine outside a convenience store. Sure enough, there was an unused outlet just next to the machine. I plugged my di2 into the wall and bought two cokes. Then I sat down in the dark to wait.

The Trans Am facebook page was abuzz at 4am that night. Lael was overtaking Steffen in the last 200 miles of the race, and dot-watchers were glued to their screens. As they rode through some tree cover in Virginia, the LW and SS tracker signals disappeared. The late-night dot watchers were aghast – who could they watch?

Sitting there next to the soda machine in Kentucky at 4am, this post popped up on my feed.