As I sat next to the droning of the sofa machine at 4am, waiting for my di2 to charge, MF’s dot started to move. I was still 15 miles from Harrodsburg, and I didn’t want to risk another gear failure before I could either get another battery or make it to a place where I could charge it fully. I waited for the shortest amount of time I possibly could and then packed up to head out. As I was packing, I realized that during the black-of-night electronics debacle, I had lost my Garmin charger. I must have dropped it and left it on the road.

My Garmin was about to die, but I had the ACA maps that I could rely on for the time being. Minor obstacles, I thought. I was still hot on MF’s heels, and I knew I could catch him if I rode hard. I was sure I could ride hard because I was motivated to catch him. Despite not having slept more than an hour in the last day, I was amped up and ready to chase. I had been working on this for three days – today was certainly the day!

I headed into Harrodsburg and stopped at a gas station to eat. The sun was coming up, and I knew I needed food. No need to do something stupid now, I remember telling myself. You might not be thinking clearly, so this is the time to be careful. Exercising this abundance of caution, I slammed down two pieces of pizza, sausage, two donuts and a large coffee.

Note that I didn’t even know what day I was on.

Back on my bike, I was in my aero bars and focused, although I was facing some problems with using the paper map. Because I didn’t have a mount for it on my handlebars, I was keeping it in my jersey pocket. This meant that at any turn, I had to stop, look at the map and remember the next cue. Something like, “Turn right, then go a few miles, then left on highway 82.” Then I would stop, and memorize the next cue. Normally, this might not have be a problem, but with my foggy mental state the cues were harder to hold onto.

Also, the hills were getting steeper, and because I was riding hard I was really feeling their effects. After a particularly grueling several mile climb I coasted downhill to find myself at a T-junction. I pulled out my map. Nothing on the map looked familiar. Confused, I banged on the window of a pickup truck and a young blond kid rolled down his window. “Yes, ma’am?” I asked him to show me where I was, and realized I had missed a turn about 7 miles back, up and over that grueling climb I had just come down. Dammit.

“Oh, you can just go this way,” the kid said cheerfully, pointing down the highway. “It’s much shorter.”

No I can’t, kid, I thought. But I didn’t have the energy to explain why. I just turned around and pedaled slowly back up the hill.

I tried hard during the Trans Am not to take small misfortunes personally. It was something I had worked on mentally before the race and for the most part I think I did a good job of detaching – if not immediately, then quickly – from problems I faced or circumstances I found myself in. There are a lot of things that happen during a race this epic, I knew, that were simply out of my control. This is the same for everyone; I was not special. Getting angry or staying despondent sucks energy, and for me dwelling on the things that sucked was not an effective or efficient way to execute my best race.

However, what was bugging me was that what was happening during the last few hours – the di2 fail, losing the Garmin charger, going off route — were not out of my control. Quite the opposite, they were exactly of my own making. They were not things that had simply happened to me, rather pretty clearly a consequence of my deteriorating mental state. There are a lot of gray areas in the ether of the Trans Am experience, and one I struggled with was this: How did I know when to simply push past challenges, and when did I know I needed to acknowledge that I was in fact creating a slippery slope of problems for myself that I needed to crawl out of?

In any case, by the time I found the route again, I was deflated. I had wasted another hour or so with the navigation error, and MF was now about 30 miles ahead of me again. Plus, I knew he had slept and I had not – another problem of my own creation. Rolling through the rural Kentucky hills north of Berea, I came across a small white clapboard church surrounded by grass. It was about 9am by now, and the grass looked so soft that it might have been actually begging me to take a nap. I wheeled my bike around d the side of the church, lay right down on the grass and feel immediately asleep. 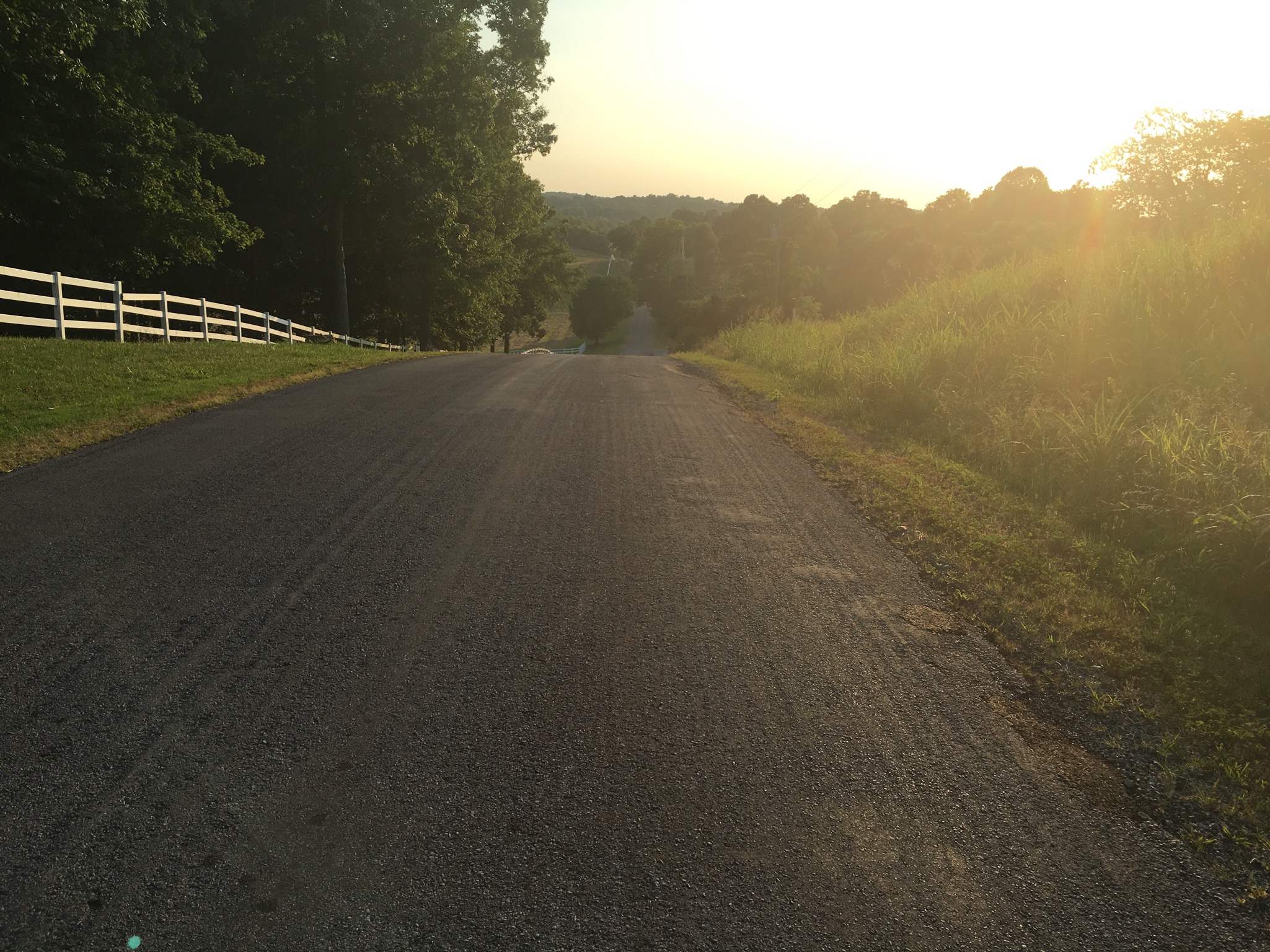 I woke up 20 minutes later to voices just above me. A woman’s voice, calling, “Honey, are you okay?” When I opened my eyes, disoriented, a woman and man’s face were peering over me. The woman held out a bottle of water.

I tried to smile. “Oh, I’m fine, just catching a small nap. I hope I’m not disturbing anyone,” I said.

“There’s a storm coming,” she said. “You’d best get up.” There was a sense of urgency in her voice. I looked up and sure enough dark storm clouds were gathering in the sky above.

The man opened his mouth. He was missing a few teeth. “There’s two hundred strikes of lightning gonna be coming down!!” he bellowed.

About five minutes down the road I stopped pedaling to take a breath. Wait. 200 strikes of lightning? What did that even MEAN? And how would he know? Now I was more perplexed than alarmed – both at his statement and my flustered reaction.

Still, the storm was coming, and as I headed down a curvy, foliage-flanked road to Berea, the sky opened up. I pulled over into a ditch to put on my rain clothes and huddled under a giant leafy bush. I had intended to start riding again, but instead I sat there for about 30 minutes, reflecting on my situation. I had to admit that I was a wreck. I was sleep deprived, wet, bedraggled, making terrible decisions and had just been spooked by a fake-weather amateur meteorologist. Something needed to give.

I pedaled slowly into Berea in the pouring rain and stopped into a Subway. As I was standing in line I saw a Red Roof Inn across the street. I should go there, I thought. And then no, as I noticed a 100 meter hill I would have to ride up to get to the front door. Then thought yes, the fact that the slight incline was provoking horror probably was all the more reason I definitely should go there.

I went there. The clerk took a look at me, asked me what I was doing, and offered to drop the room price from $90 to $35. She and the manager also offered to arrange to get me a new Garmin charger while I was sleeping. I went in that room and cranked the air conditioning up. I felt worse than I had since I had started the race. In fact, I wondered whether I would ever get up. Before I fell asleep, the thought actually crossed my mind that I might not be able to get on my bike again. This might be the race for me.

I woke up three hours later, without an alarm. The storm had passed and the sky was clear. I put on my wet clothes again and wheeled my bike out of the room. The woman at the front desk had in fact gone to Wal-Mart to buy me a new charger for my Garmin. I paid her and thanked her profusely.

I got on my bike with a sigh and slowly started pedaling again. MF was now 80 miles ahead again. I knew there was no way I could pull another stunt to try to catch him. But as I pedaled up Big Hill outside of Berea (a good name, incidentally, to introduce the remainder of Kentucky that lies east of Berea),  I felt okay with it. My strongest emotion was of relief – I felt like Lazarus that had risen from the dead.

The rest of that afternoon and into the evening I rode calmly. The competitive drive had been sucked out of me, but I was still committed. I was going to finish this race, and finish it well. This whole journey had always been about much more than performing or winning. It had been – and still was – about learning about myself and testing my limits, and this I had surely done by acknowledging and responding to my instincts to be the best that I could be. I had put it all out there the last three days, and reached the edge of something that had seemed a little scary. But now, I seemed to have stepped back from that edge. I was still in ninth place, but perhaps I was a tiny bit of a different person now.

I stopped that night in the tiny town of Booneville. There was no hotel, but someone told me that a church down the street had built a pavilion where cyclists could sleep as they came through on the Trans Am. When I got there, the evening air was warm and there were mosquitoes out in swarms. I ate a sandwich and then pulled out my sleeping bag and bivvy and wrapped myself up to my neck so I didn’t get bitten. I listened to the sound of the birds doing their post-sunset talk. I called Jimmy and he was still riding, in western Kentucky. I told him about my day and that I was still alive. I talked to Donncha and we didn’t speak about the race at all. Instead we talked about friends and family and striking the right balance in life – kind of like a normal conversation you would have with a normal friend. Weird.

I fell asleep still feeling spent, but also peaceful. There had been so many adventures already – and with 800 miles still to ride, there was probably time for several more.