When I woke up at Crazy Larry’s hostel an hour or so later, I felt like death. I still had 500 miles to the finish line and I truly had no idea how I was going to get there. I dragged myself out of bed and thanked Larry for his hospitality. He asked me to do a wheelie, and I made my best effort. It wasn’t a very good one. 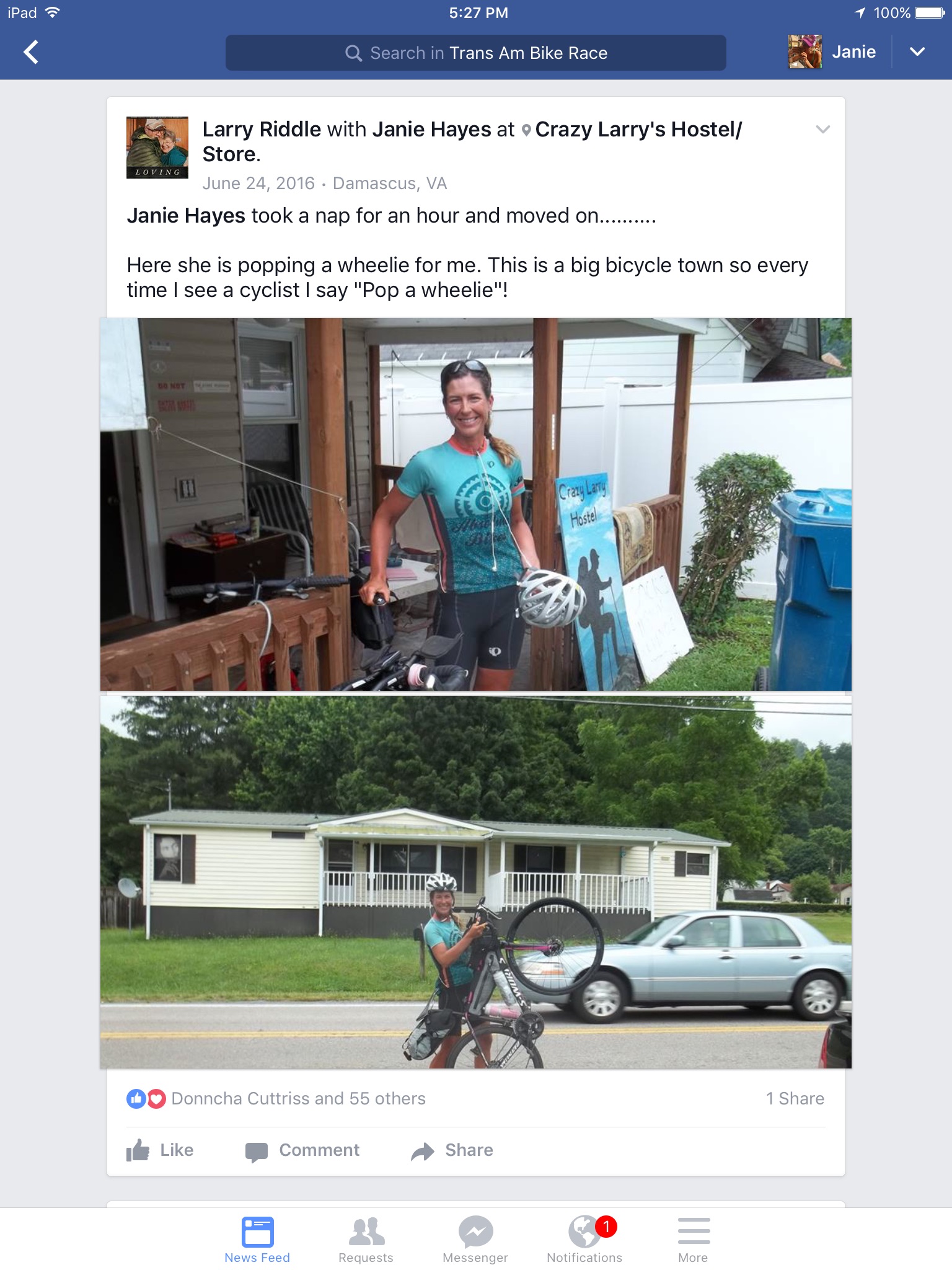 It was around 10am, and I set my modest sights on Christiansburg, about 100 miles away. It should have been an easy enough journey – a shallow 15 mile climb, then a descent, peppered with a few climbs, for the next 85 miles or so. I pedaled slowly up the climb, which runs along a lovely river. Outfitters in vans passed me with rafts and bicycles, and I watched them wistfully, wishing I was on vacation rafting a river or riding my bike.

Wait, I was on vacation riding my bike. Something was wrong with this picture. 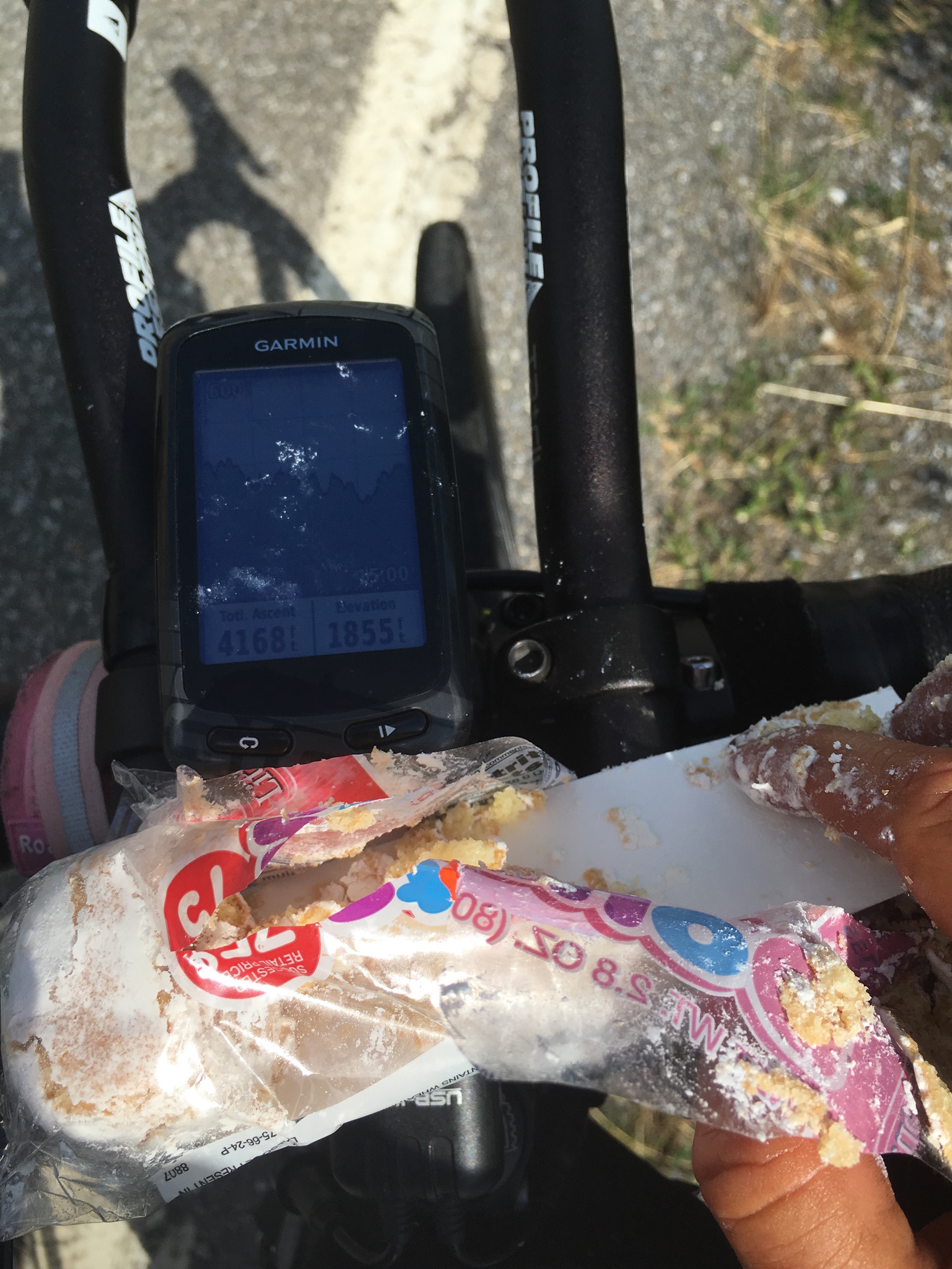 I made it up and over the climb and down towards Rural Retreat, where I stopped in a small gas station staffed by two women who asked me where I was going to, and where I was coming from. When I told them, both of their pairs of eyes widened like saucers.

“By yourself? Aren’t you afraid?” they asked. I said no, and that I felt perfectly safe and had never felt threatened during the whole trip. One of the women said she still thought it was irresponsible for me to be putting myself in “that kind of a situation.” The other one smiled at me and said, “I would give anything to have that kind of adventure.”

Just as I was leaving, I encountered Nathan and Anthony. They had been at the finish line and were now backtracking to find remaining racers. 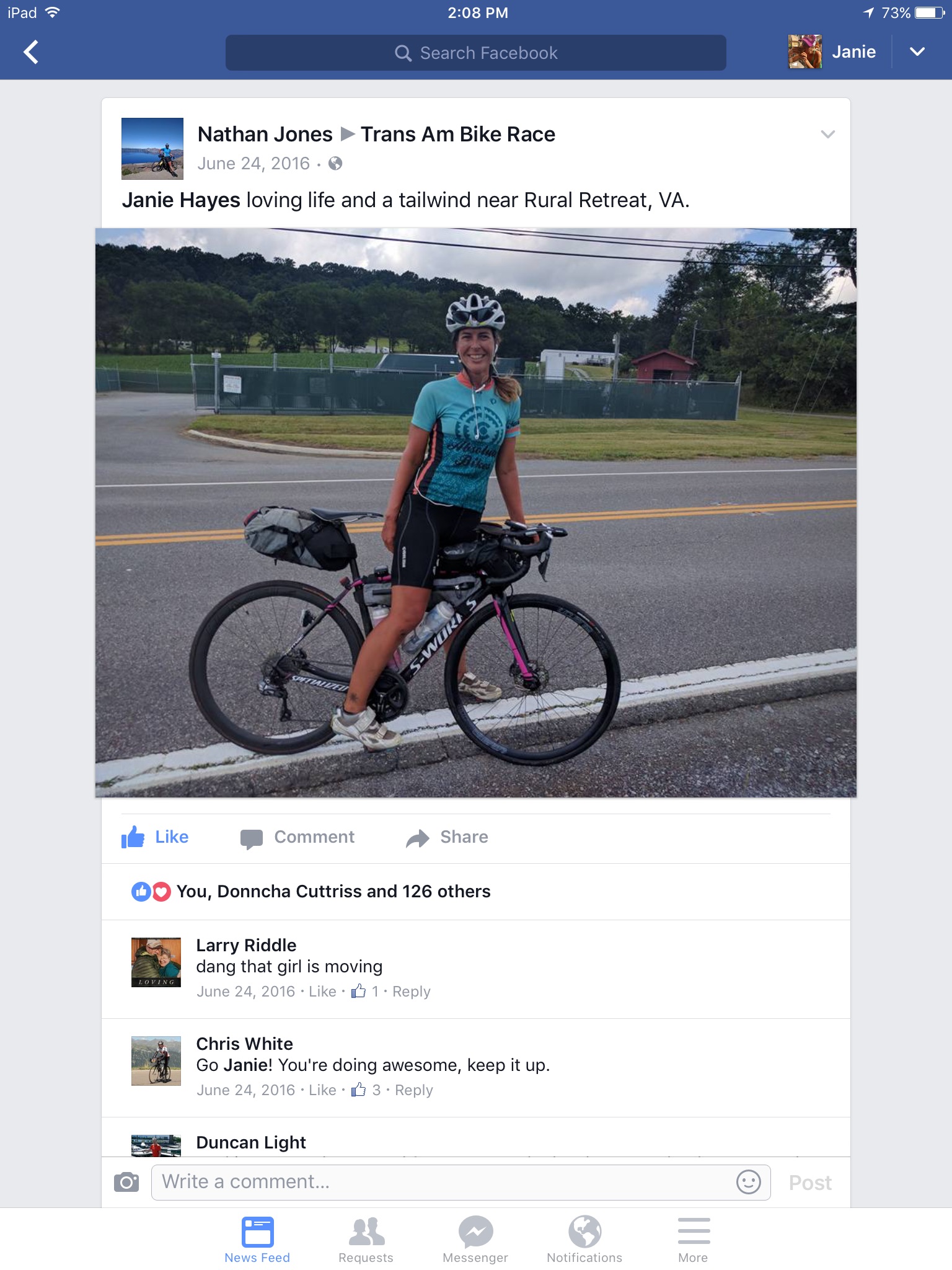 I don’t particularly remember either a tailwind or loving life, but I am taking his word for it.

The rest of the day’s route passed largely along the access road for highway 81. I was so tired that I forgot to stop and get food for several hours. About an hour from Radford, Virginia, I bonked – and hard. I could barely keep my legs turning over, and at one point I remember getting off my bike and just laying in the grass next to the light rail tracks. Somehow, after what seemed like an eternity, I crossed the bridge into Radford. I headed to the Sonic and ordered two bacon cheeseburgers.

As I was eating at Sonic, I heard my name and saw two smiling, clean, familiar faces approaching. Katrina and Jim live in Radford, and a few years earlier Jimmy and I had been on a group bike trip along the Blue Ridge Parkway with them and some of their friends and family. They are avid cyclists, and both infinitely positive spirits, and it was like a glimmer of hope to see their faces. My Garmin had died, once again, so they helped point me in the direction of Christiansburg. One of their friends and his daughter was also out along the way to cheer me on. 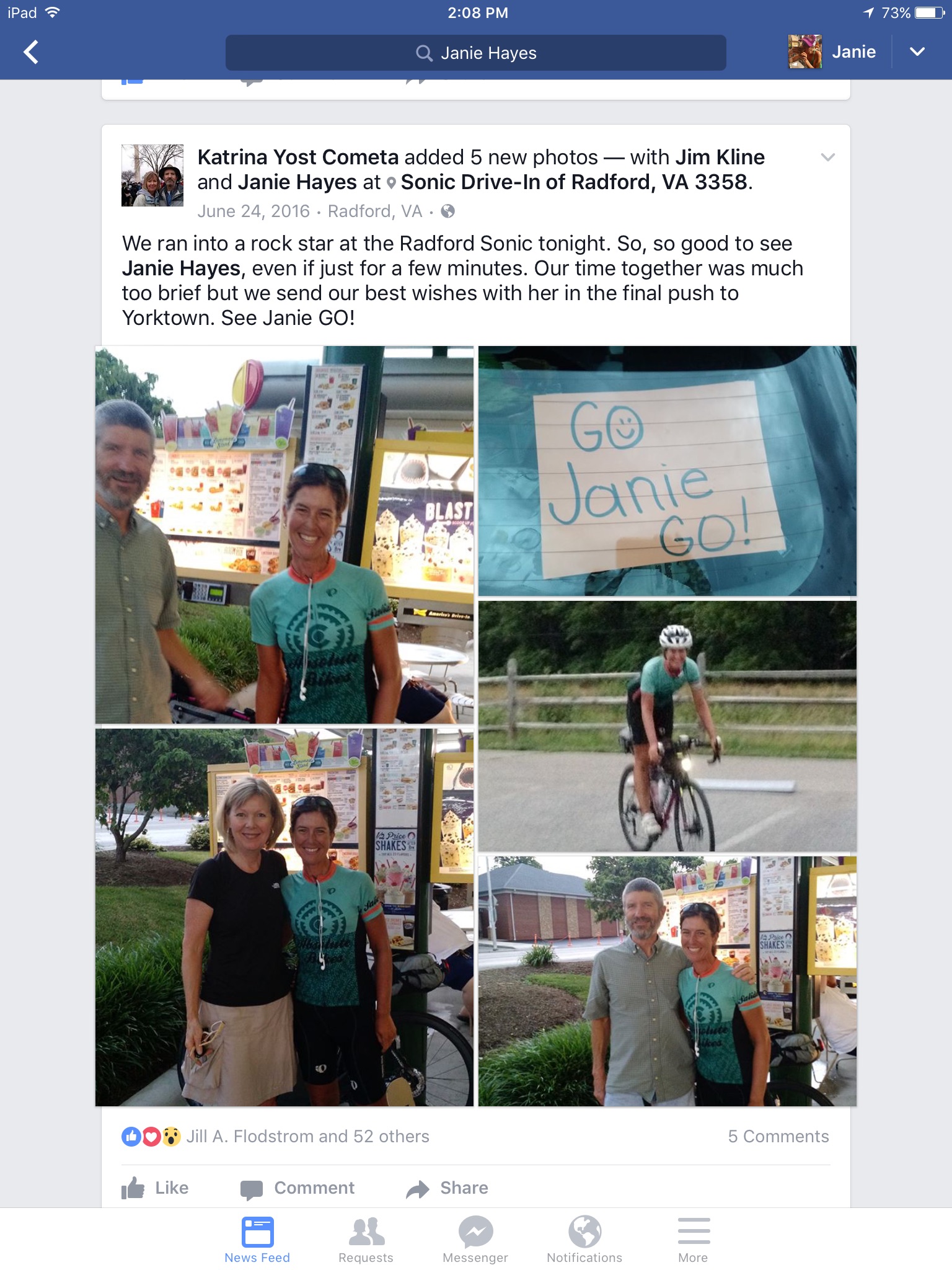 Seeing Katrina and Jim’s faces reminded me that I was getting close to the finish – and into comfortable, familiar territory of family and friends. For four years, Jimmy and I had lived in Washington DC. We have a lot of friends and family in the area, a number of whom had promised to come out in the final miles to cheer us on and even ride stretches with us. As I pedaled the last ten miles onto Christiansburg from Radford, through suburban neighborhoods with low ranch houses, I felt both excited and anxious about that prospect. I was certainly excited to see familiar faces, but also anxious about interacting with others in the precarious physical and emotional state I found myself in. At the moment I was certainly more a shell of a human being than my normal self. Would I still be able to communicate? What would they think of me? Is this sort of what an animal in the wild feels like, I wondered.

Just before Christiansburg, a woman cutting her lawn on a driving lawnmower called to me as I passed by. “Hey, you! Hey, you! Turn around!” Dutifully, I turned around, and she jumped off her mower to come down to the fence that bordered her yard. Her face registered disappointment when she saw me.

“Oh. I thought you were a maaaan,” she said in a Virginia drawl. She pointed to the lawnmower. “Do you know how to work this thing?” When I said I had no idea, she shrugged and said she wasn’t surprised. Her husband had recently died, she said, and now she was in charge of the lawn and what did I think about that. I thought about telling her that my husband was a couple of days behind and if she would just wait right there he might be able to help her out. Instead, I said something lame, like maybe she could look on the internet? She raised her eyebrows at me like I was from Mars.

Christiansburg was a real town, as it turned out, and when I stopped at the convenience store on the outskirts of town and asked the clerk where the motel was, he didn’t know. I almost cried. I was absolutely desperate for sleep. I found my way into town and to the grungy motel there. I knew this would likely be my last sleep in a bed before I reached the column in Astoria, and I wanted to make the most of it. When I woke up, I would have just under 400 miles to travel.

So close, yet still so far away.