I finished my story last week, and then I kind of felt like it wasn’t over yet. Several people have asked for posts on gear, training and lessons learned – and I will get to that. Some people also asked questions about the immediate aftermath of the race. And it’s true that, while arriving at the finish line was an important moment, it didn’t quite mark the end of my Trans Am experience.

So for those who like epilogues or post scripts, here’s what went down after it was all biked and done.

Mixed drinks were not spared the assault.

My plan was to stay in Yorktown until Jimmy arrived, a couple of days later. Suddenly I had the time and emotional energy to spend thinking about his race, his safety, his exhaustion and sleep deprivation. I became a full-time dot watcher for a couple of days, totally reveling in the addiction of those little dots moving across the screen.

Jimmy arrived in 25 days, 2 1/2 days after I had finished. Watching him riding up to the monument gave me chills. It felt so out of the realm of possibility to have had such a completely intense, singular, solitary experience – and yet to be able to share it with someone that I love. It made it that much bigger and more important. We have been telling each other stories ever since.

My brother Danny, just off the plane from a work trip to Israel, and friend Karen were able to make it to the monument in Yorktown to welcome Jimmy too. Karen made coconut cake. 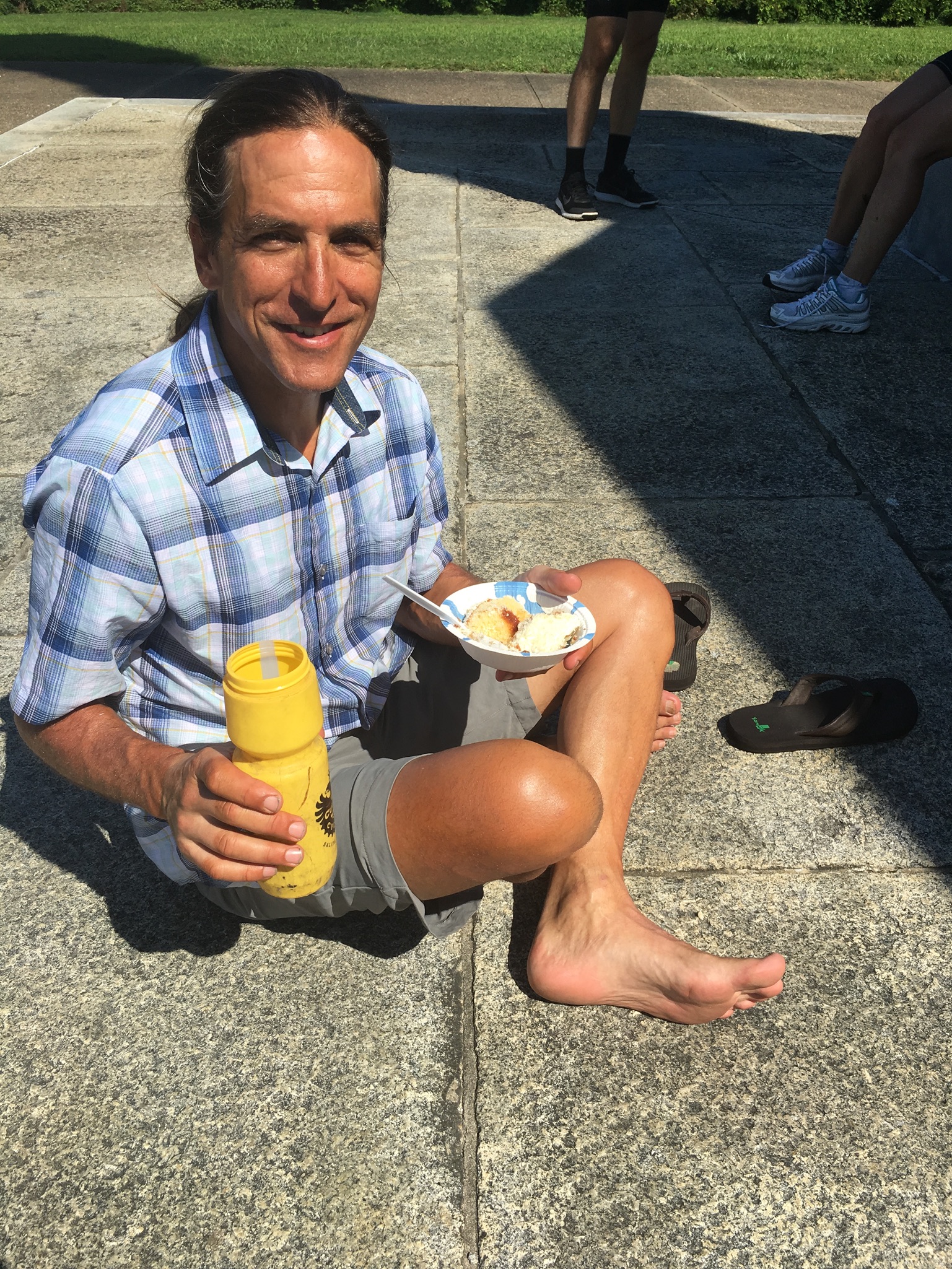 Several other riders finished between me and Jimmy, and I got the opportunity to welcome a number of them at the finish line too. I was excited about this – because even though the Trans Am is not a rah-rah experience, and no one does this race because they are looking for cheering crowds or accolades, still we are all humans who are accomplishing something pretty mighty by pushing ourselves to complete this race. I wanted to be there to celebrate that.

Plus, there was simply an element of curiosity. So many of the people I had thought about during the race were nothing more to me than pink or blue dots with initials moving across a screen. I wanted to see them as something more. 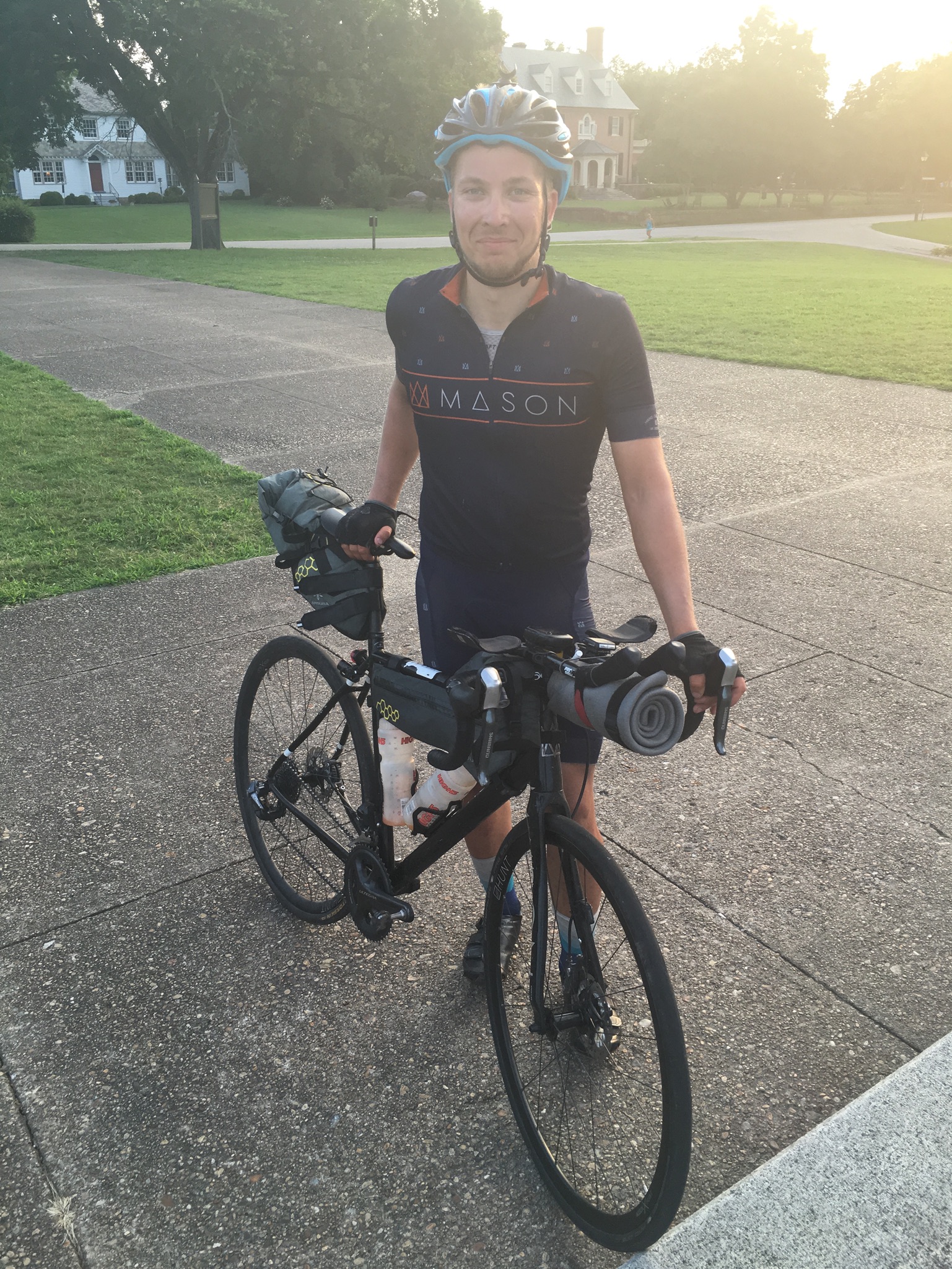 Enrico Comunello was the next to arrive after Markku. I had met Enrico in Astoria, giving him a ride to his hotel from the post office, so I was excited to see him again. Walking to the monument in the dark, a tall rider, who I didn’t recognize, was heading the same place. When I told him my name, he smiled and said: “Massimiliano Fancoli.”

A blurry Enrico, Janie and MF 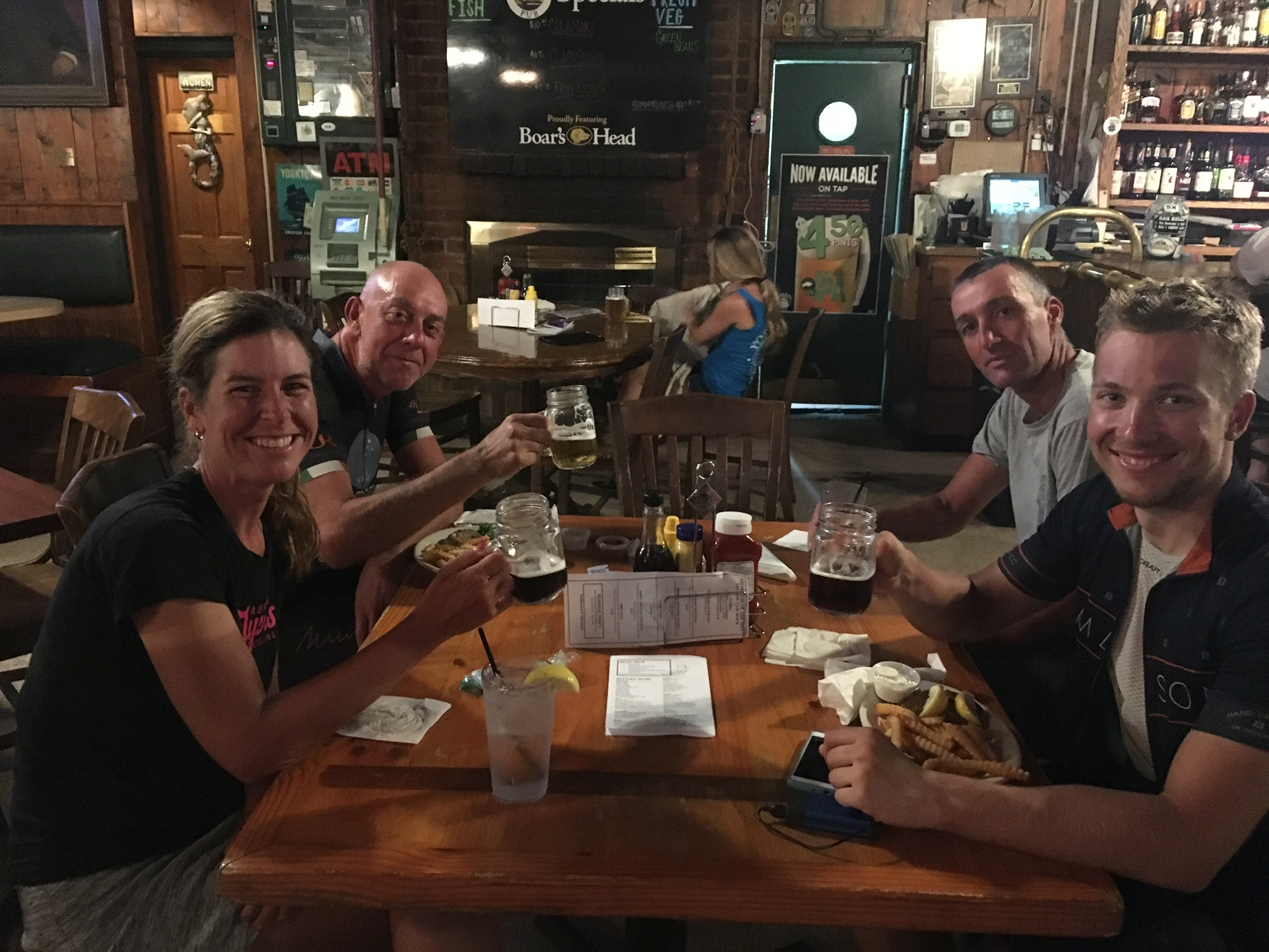 A less blurry post-race celebration with Enrico, MF and Markku 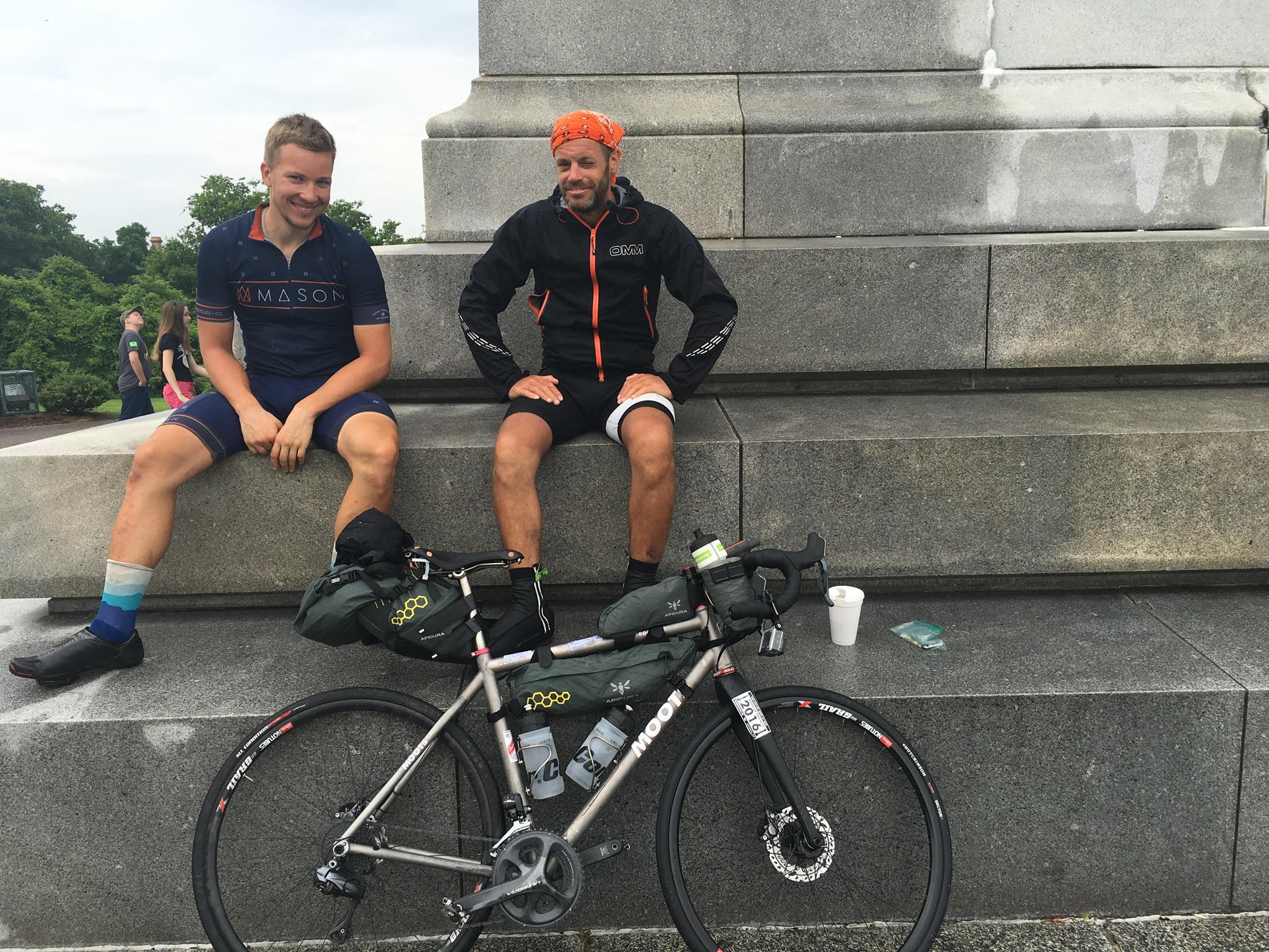 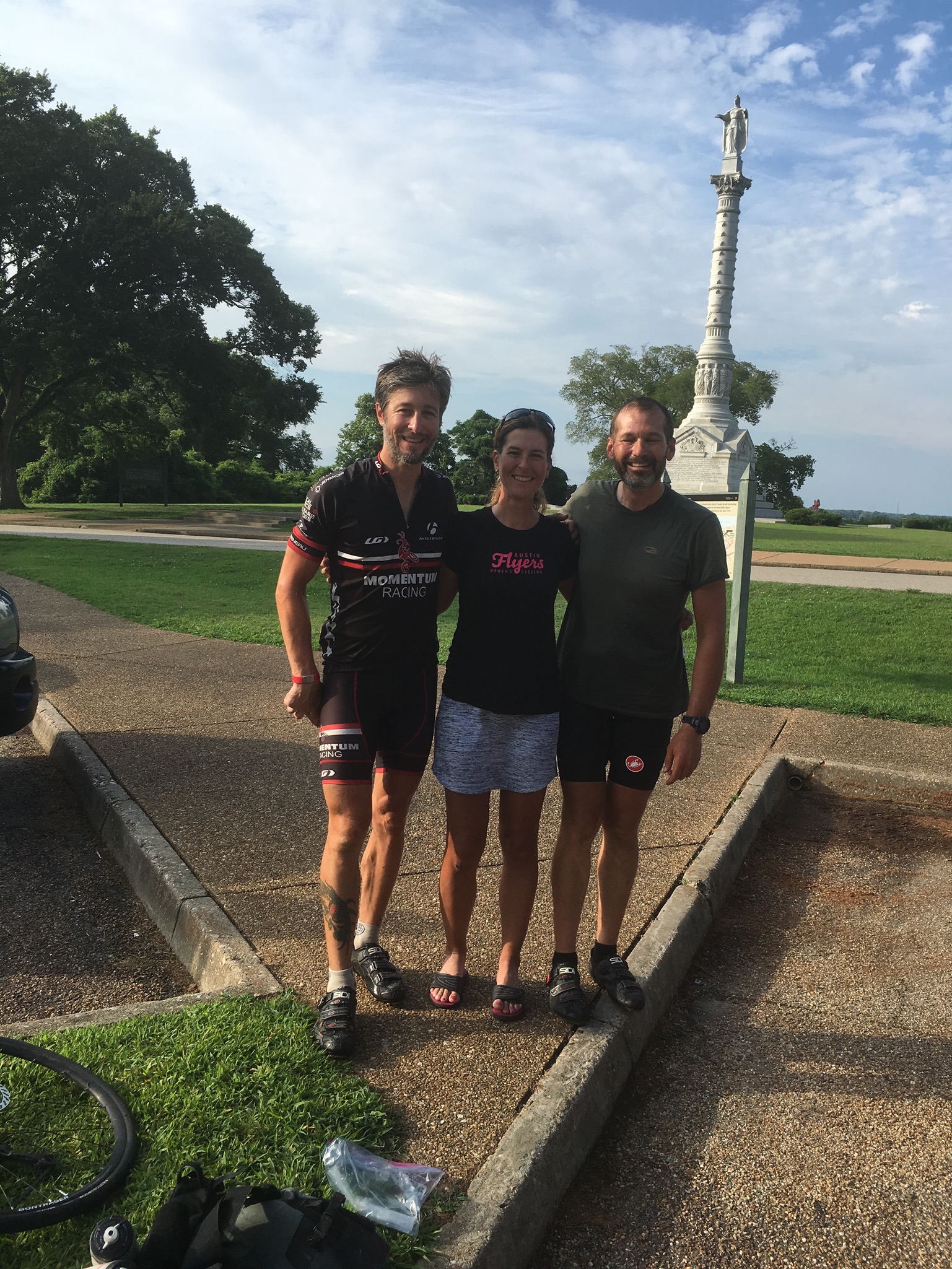 With Jason Kulma and George Koefler 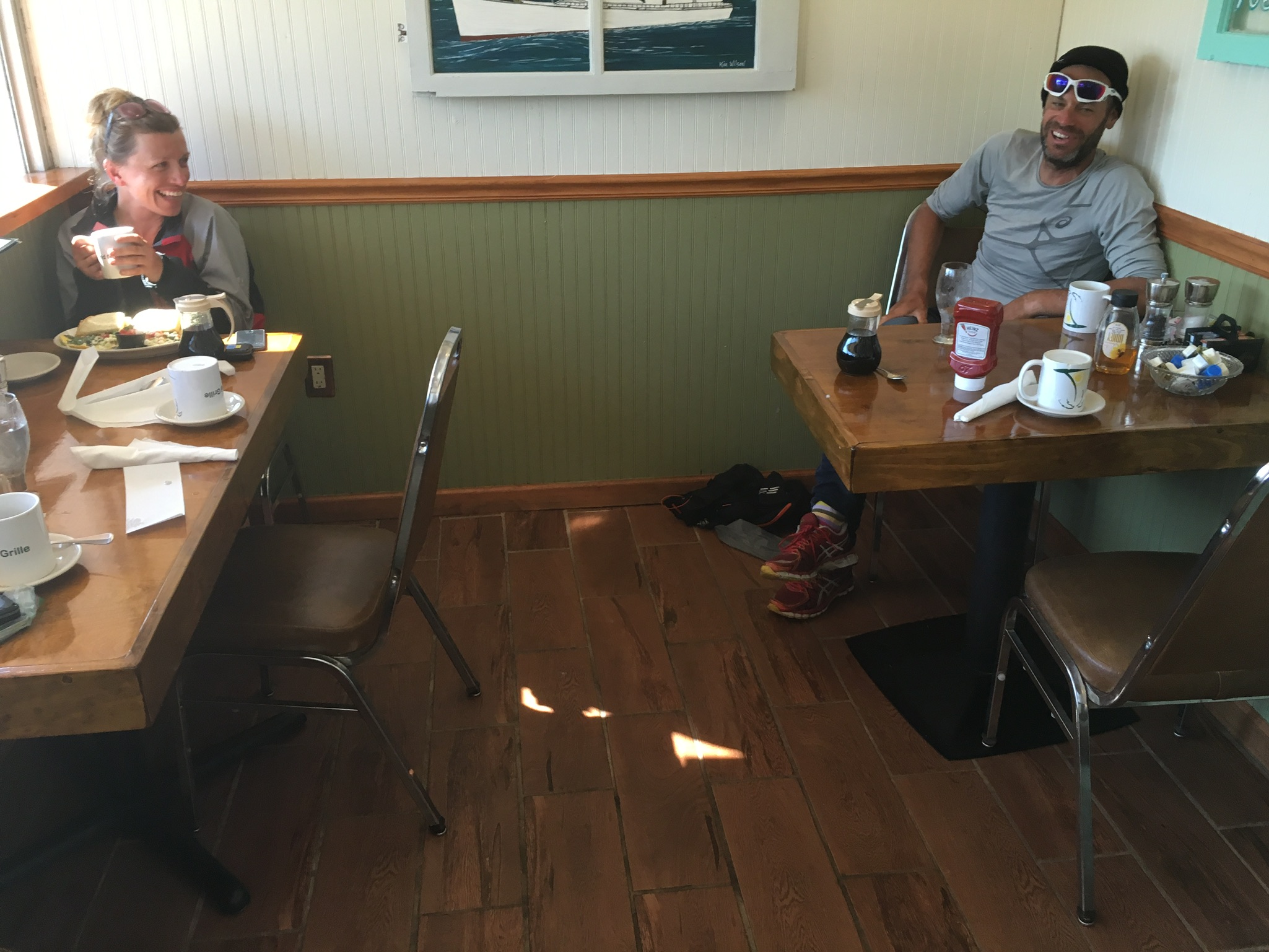 Irena and Andrew at breakfast just after Irena’s finish

Sadly, I missed Brian McEntire, who finished in the middle of the night, and Andrej Zaman. Boo.

The immediate aftermath of the Trans Am was, perhaps a bit like the race itself, a roller coaster. Physically, I did not fare very well, and for the sake of future riders, or anyone considering an event of this magnitude, it’s perhaps worth coming clean about the toll that a race like this can take on the body.

The night of the finish, after taking a shower, I noticed a severe itching and burning on the left side of my body. Looking in the mirror – which I had strategically not done for days – I saw that I had a well developed case of poison oak (or ivy) that had spread from just above my left knee all the way up to my lower back. It was already angry and swollen and close to blistering. Still, I had never noticed it during the race. The brain’s capacity for denial is pretty intense. I took steroids to calm the infection, but my sleep for the first week or so after the race was interrupted by the pain of this rash.

A few people noted that the saddle sores, which seemed to get a lot of attention early on, faded from view later in my story of the race. That pretty much reflects what happened in real life, luckily. All the treatments I was trying led to a slow healing, and by the time I hit the finish line those sores were no longer open wounds. Unfortunately, the heat and humidity after Colorado led to a range of other unspeakable rashes, infections and sores – some of which took weeks to subside. I know, I know, TMI. But a reality nonetheless.

About a week after the race was over, I woke up to a case of full-body hives. They covered my legs, arms, torso, and back. They itched and burned constantly and were hard to cover up when I had to attend work meetings in Washington DC. The cause remains unclear – this doesn’t seem to be a common post-ride ailment. In one way or another, though, my immune system was definitely crying Uncle.

For a month after the race I had constant nightmares. I would be somewhere riding my bike, going nowhere, with always “800 more miles to go.” It was the endurance racing version of that college dream where you forget to show up at your exam.

I had pretty severe nerve damage in both my hands, and to some extent my feet. My index to pinky fingers were numb on both hands, and I had lost most of the strength in my right hand. For almost six weeks after the race was over, I had to use both hands to turn the key in the car ignition, and take the lid off the toothpaste. Fortunately, the symptoms eventually subsided, and now that I have normal function in my hands and feet, it doesn’t seem so bad anymore at all. Funny how that works.

Brain chemistry changes from the experience were less specific, but just as real. It seems that many endurance athletes experience periods of depression /or mood changes after particularly long or grueling races. There are lots of theories about why and how this happens, but they are certainly related to chemicals in the brain that affect emotions. I had experienced some form of this in the past, for example a feeling of letdown or depression after Ironman triathlons or ultra running races.

My post-Trans Am experience was nearly the opposite. Once the hives and the pain and the nerve damage and the nightmares started to subside, I experienced several weeks of elation, before coming down into a semi-depression – which luckily didn’t last very long. That feeling of excitement almost had the symptoms of a mania – my brain raced, I was excitable about everything, and yet unusually irritable too. It wasn’t an unpleasant feeling, but definitely not “normal.” And certainly there was a chemical component that must have been stirred by the huge physical, mental and emotional requirements of a month of bike racing.

Since the race, I have seen many comments, questions and requests for help on forums and social media about post-race depression (not only post-Trans Am but other endurance races as well). This is a common issue, and I’d encourage anyone who experiences this to reach out for help. Talk to a good doctor, or a friend, or do seek guidance from others who have experienced it. You’re not crazy. The psychological impact of a race like this is real.

Gear and training up next – stay tuned.