After getting myself pointed in the right direction toward McKenzie Pass, instead of away from it, I was back to enjoying the nighttime riding. It was that in-between temperature where when you stop, you think it’s cold, but once you start moving, the air feels perfect. It was about 3:30 or 4am now, and I laughed to myself thinking that being on my bike in the middle of the night after 30 minutes of sleep, and awakened by a brawl, was my new normal.

McKenzie Pass is a long (~20 miles or so) climb – not too steep, but steep enough towards the top to remind you what’s happening, especially hauling full bike bags, which I wasn’t used to yet, and felt like dead weight. Despite riding 280 miles the day before, though, my legs didn’t feel too bad and once I passed the gate that closes the road to cars, I put in my headphones and was rocking out to Ke$ha.

Around 5am or so the light began to flick light across the sky, and as it got lighter I could see that the ground on either side of the road was covered in several feet of snow. What a difference a year makes, I thought. Last year when I rode this pass, it was in the middle of Day 2 and the temperature was hovering around 100 degrees F. This year, the trees looked softer, the colors more muted, in the morning light. 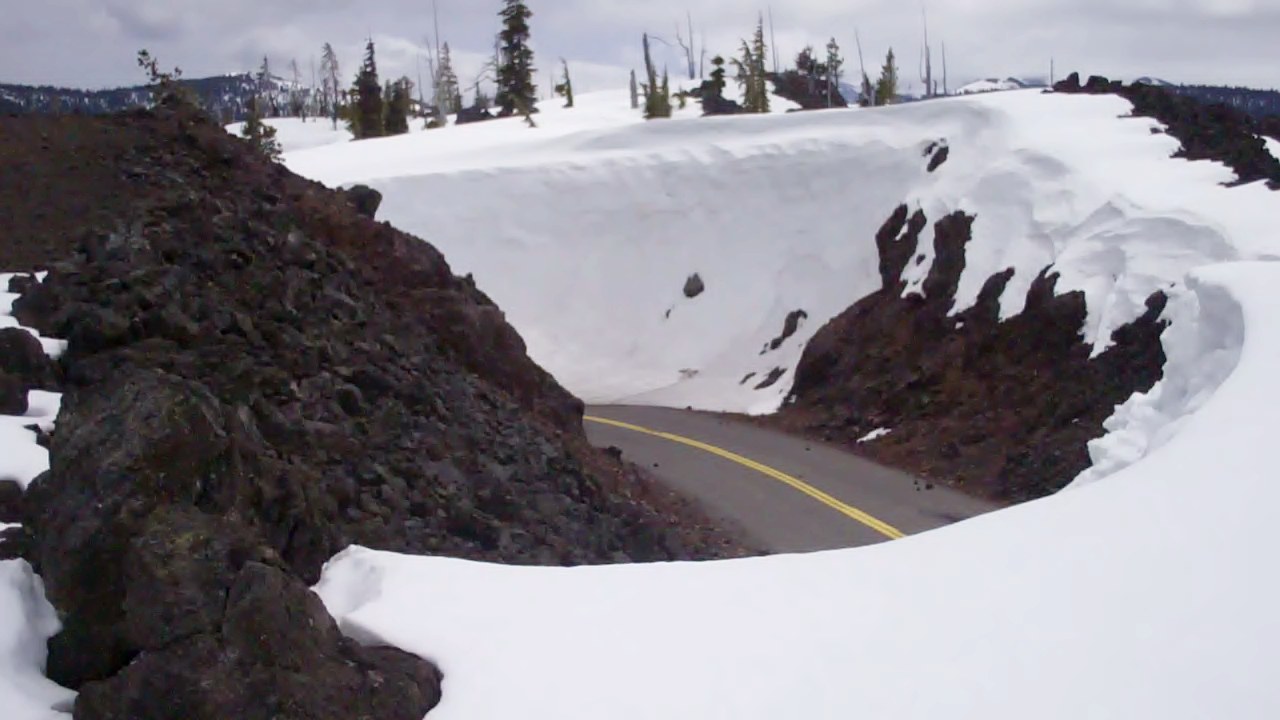 Near the top, I stopped to put on my down jacket and gloves. While I was stopped, Evan and Bo Dudley came up from behind. I was happy to see them, and we rode the last few miles together. It was below freezing, and neither one of them was interested in stopping to take my picture at the sign. I didn’t really blame them.

The descent off McKenzie Pass is a bomber, and probably normally a ton of fun. This year, though, I was shivering noticeably on the way down. I had to stop a few times and blow on my hands inside my gloves so I could feel my fingers. Being already maxed out on my warm clothes less than 24 hours into the race was a little unnerving, but I tried to push that thought out of my mind.

The little town of Sisters sits at the bottom of the long descent, and as I rolled through I didn’t see either Bo or Evan. I also didn’t see much of anything open on this Sunday morning. On the far side of town I stopped at a drive-up coffee shack, and waited in line with the cars for coffee and a muffin. I shivered in the parking lot while I drank my coffee and got warm enough to ride again.

Leaving Sisters, I realized I had completely forgotten to stock up on food. Anyone who wants to go fast in the TransAm knows that minimizing stopped time is one of the most important strategies for making that happen. A punitive, but accurate, way to see it is that every 15 minutes you’re stopped during the race is as many as 5 miles lost, and these miles add up frighteningly quickly over days, and especially weeks.

Reflecting on 2016, I felt that stopping too often had cost me time and I was determined to improve on that this year. It sounds pretty easy, but probably most people who have tried it would attest that minimizing your time off the bike is a lot harder than it sounds. Doing it well requires several things: the fitness to keep riding without stopping, and forward-looking decision making at many points every day.

I wasn’t there yet.

Twenty miles down the road in Redmond, I stopped again at a Mexican place to get tacos. My food storage situation was another element that I had bemoaned last year and had resolved to improve so that I could carry more food and eat more on the bike, instead of off it. However, I hadn’t really considered exactly how I was going to improve this situation. Immediately after rolling out of the Mexican place, one of my three tacos flew off into traffic. RIP taco. Then a couple who had been in the taco joint chased me down with my credit card, which I had dropped on the floor while ordering.

The shit show was continuing.

There is a screaming descent into Prineville, which I hit around mid-morning and thoroughly enjoyed. As I rolled through Prineville, some dot watchers called my name and rang a cowbell, and I waved and whooped. Last year I had spent my second night in Prineville – and it was weird to already be a third of a day ahead of last year.

I felt good starting the next long climb up to Ochoco Pass out of Prineville. It was a beautiful day, if still a bit chilly, and the road passed small lakes and cows in fields. I could see two riders in front of me but didn’t know who they were and wasn’t gaining on either of them.

About halfway up the climb, Evan pulled up next to me. He had stopped to chat with some friends in Prineville. We talked for a minute, and then he pulled away. I watch him pass the first rider in front of me within minutes. The way Evan was riding was impressive – so steady, focused, and smooth. He is going to win this race, I remember thinking. That was the last time I would see him until Yorktown.

On the other side of the pass I crossed paths with Randall Rice. We chatted a bit and he told me about his military background. He was wearing a backpack. Arriving in Mitchell, I stopped in at Spoke’n Hostel and chatted with the guys there for a minute. I wanted to keep moving but knew I needed to eat a real meal, so I went into the diner next door and ordered two burgers: one to eat with fries, and one to go. I drank a coke. I felt like I shouldn’t need coke already, but I was undeniably sleepy. I listened to the waitress and the owner argue about something for a few minutes, and tried to psyche myself up to get back on my bike. 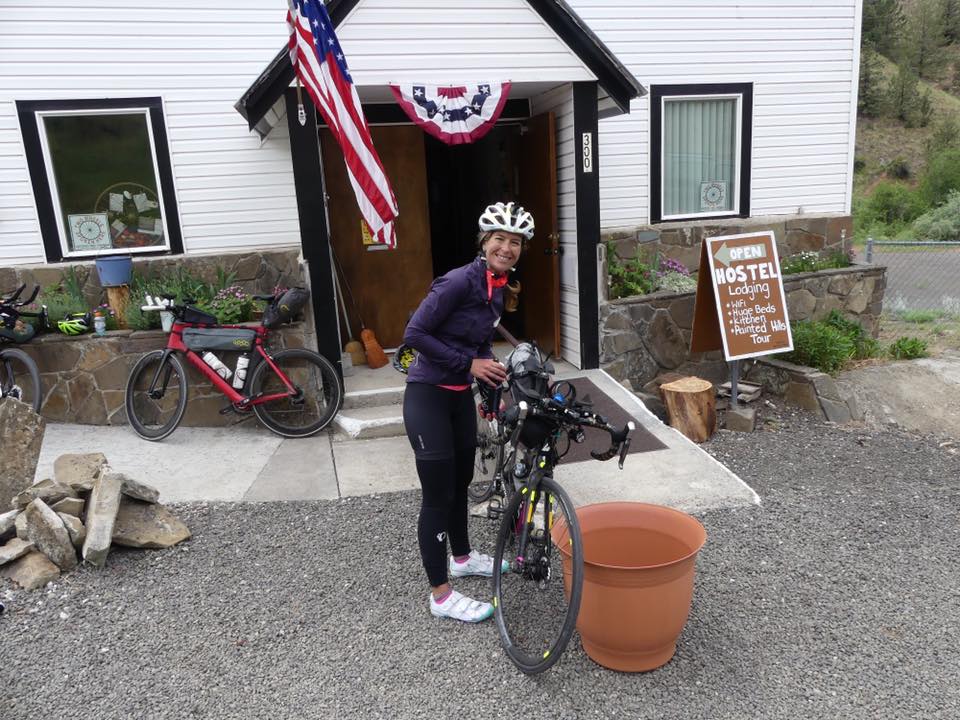 The afternoon ahead should be one of my favorite sections: A long climb out of Mitchell, then a 20-mile descent followed by dozens of miles of flat. Aerobar party, my favorite! I remembered the red rocks in this section were prehistoric and fantastic, and tried to look forward to the rest of the day. My original plan had been to make it to John Day on Day 2, which is about 75 miles from Mitchell. 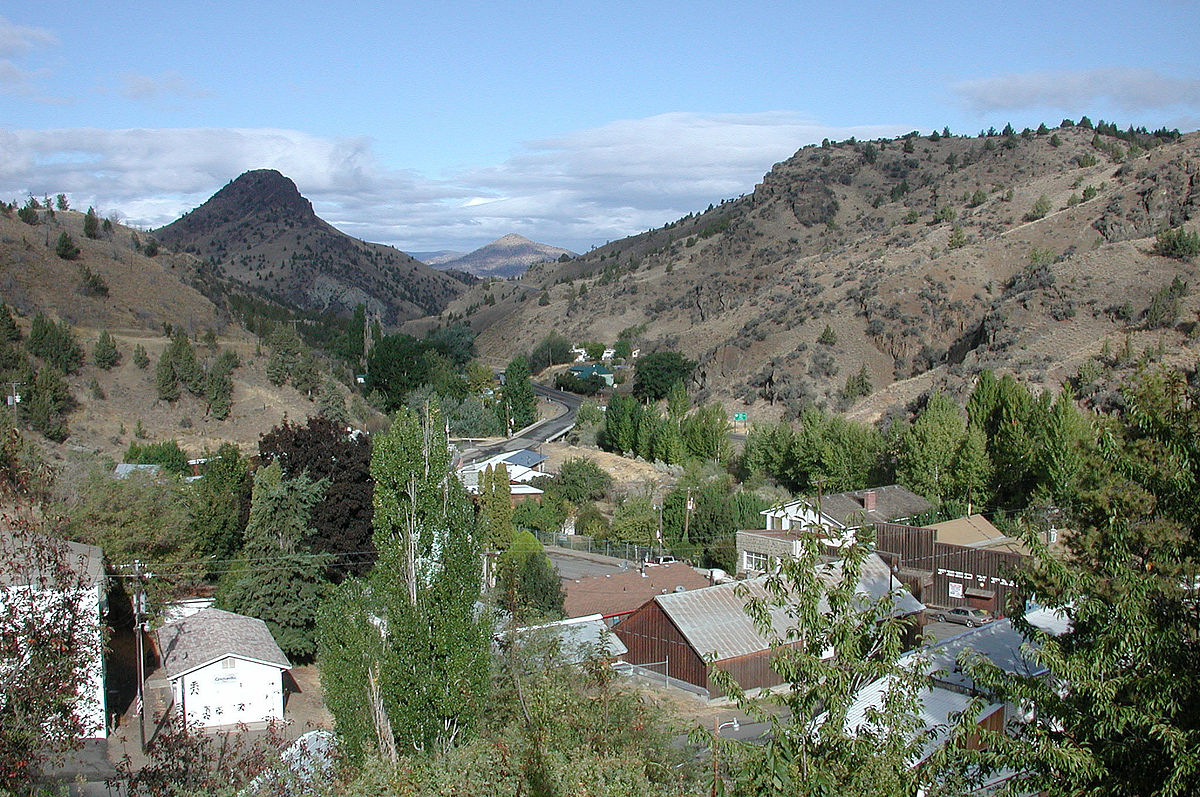 View from above Mitchell. Source Wikimedia

Over the climb, I enjoyed the descent, but not as much as I wanted to. I called my mom. I passed through John Day, which is where I had planned to spend the night. It was still early, though, so I rolled through, mulling my options. I ran across Randall again, who was standing at an intersection looking a bit dazed. He told me he was planning to ride to Baker City, one of the last towns in Oregon, that night. It was about 7pm. 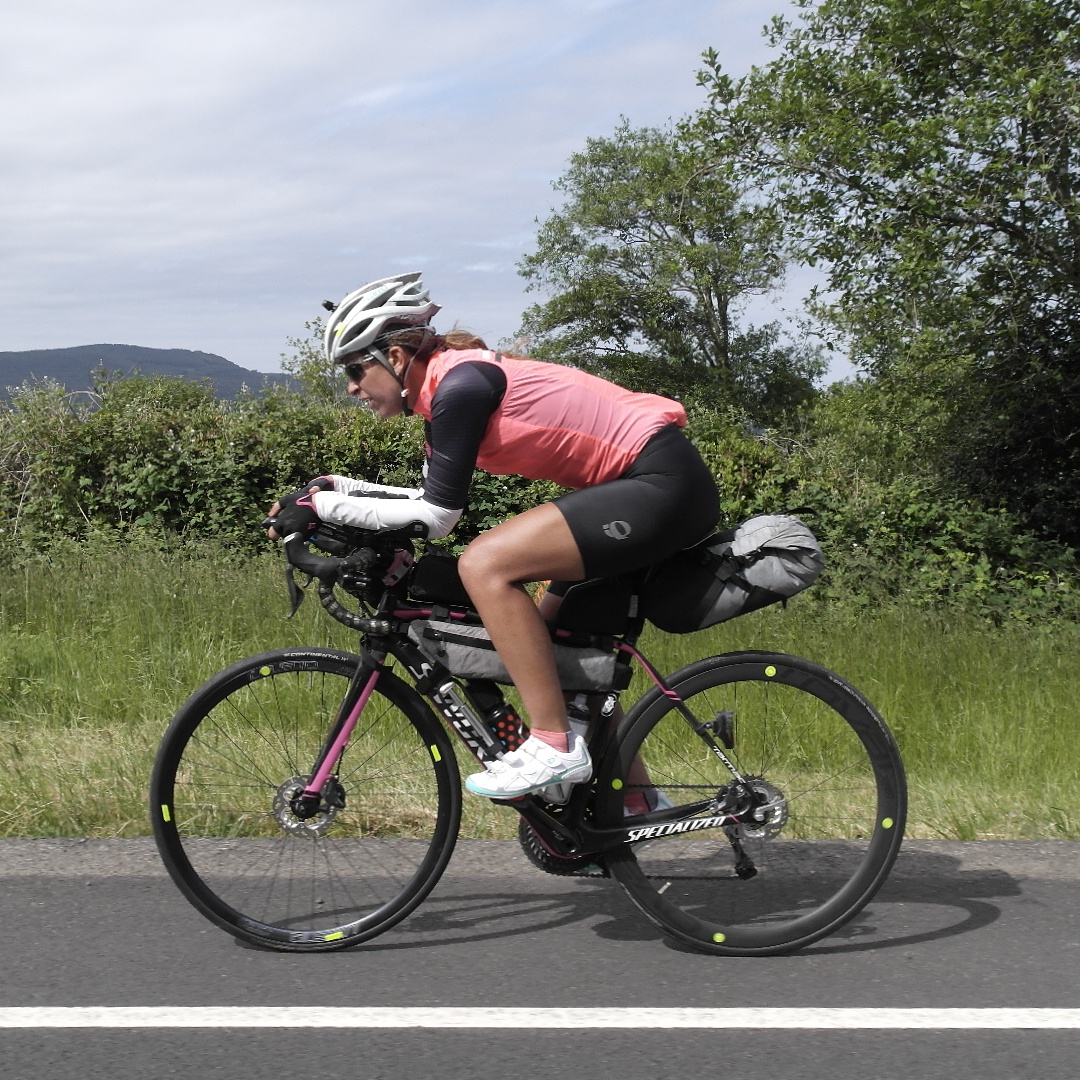 I figured that most of the guys in front of me would be hitting Baker City tonight. But I also knew the route to Baker City was 80 miles, and over three passes, with few to no services. I had already blown my plan the day before, and I was paying the price. I needed to regroup.

It was a long uphill, windy drag from John Day to Prairie City, and I felt spent. I wasn’t all that happy with how I was doing so far, physically and emotionally, but I also knew that I needed sleep. I was ahead of my plan by just a bit. That should have made me feel good, but I wasn’t sure whether that was a good or foolish thing at this point. I decided to stop in Prairie City and get a grip (and a good rest). I knew I was letting the front of the race get away from me, but that was just a risk I had to take.

I stopped into the convenience store, where two touring cyclists outside stopped me to ask about the race. I stocked up for what would be an early-morning ride over the passes. It was probably only 7pm, but I checked into the motel there, and the woman said she had a little restaurant next door. I took a shower, which was pure bliss, and went into the restaurant in my bare feet. She had made me a giant salad and a burger. I ate as quickly as I could without being totally weird and disgusting, paid hurriedly and fell into bed. As I fell asleep, I listened to the sound of kids playing on a summer evening outside my window.