I slept for seven hours in Prairie City.

WHAT? Who sleeps for seven hours on night two of the Trans Am Bike Race?! That’s ridiculous. I heard later that Luke Kocher and Michael Wacker thought about being worried about me because I had stopped for so long. It’s always nice to know your fellow racers are watching out for you. Thanks, guys.

It’s probably obvious, but worth a mention, that I felt like a million bucks when I woke up. I was full of energy and could hardly wait to start riding. Sleep can have an amazing effect not just on your body, but on the brain chemicals that fuel mood and mental state. For the first time since the early part of day one, I was ready to roll!

I pulled out of Prairie City around 3:30am or so into a cold mountain air. There is a long climb out and the effort warmed me up. I was pedaling in a slow rhythm, looking up at a bright, almost full moon and a sky filled with stars. I remembered that in 2016 when I had met Michael Rushton on this pass, I was already struggling with painful saddle sores that would haunt me for the rest of the journey. So far this year, I was avoiding that curse.

As I crested the first climb and began to descend, the temperature started to drop. And drop. My Garmin said 26 degrees. A crystalline, icy fog began to form as I dropped into the valley, and I could not think of anything but wanting to start climbing again. The road snaked around corners, and even in the pre-dawn morning the lights of cars would come by occasionally. I remember wondering where those people were going. Who were they and what were their stories. What, I wondered, would they think of mine?

The shallow descent along the Powder River into Baker City is a beautiful stretch, and the rising sun was beginning to warm things up. Along this stretch I passed another rider who looked to be emerging from a stop, and he called and waved to me as I went by. 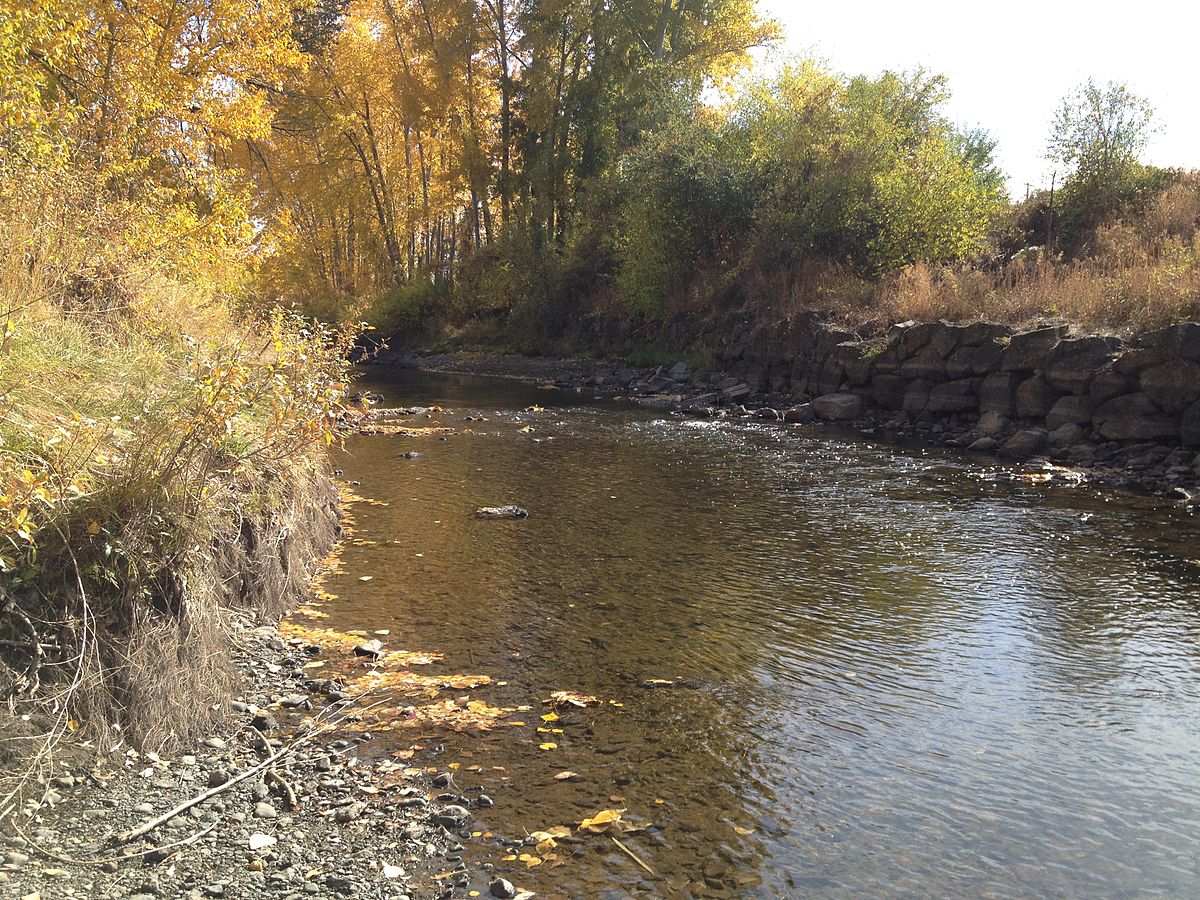 Scene from the Powder River Source

I thought it might have been Jose Bermudez, but I wasn’t sure. Back in March, Jose and I had a close encounter of the bike-crashing kind during the early miles of a 400-mile RAAM qualifying race in Texas. We had crashed, together, in a low-water crossing at the bottom of a steep downhill in the pre-sunrise dark. It was certainly an awkward way to make an acquaintance – not to mention that the crash tore the zipper up the side leg of my bib shorts wide open, leaving me with no choice but to call for pants reinforcements. Jose had gone on to become the first rider ever to finish the race unsupported. I dropped out due to an (unrelated) mechanical, and went to a brewery. I knew he was doing the Trans Am, but this was the first time I had seen him.

I stopped at the convenience store just on the west side of Baker City, and went inside to use the bathroom and fuel up. When I came out, I saw three girls with cowbells in the parking lot, bouncing up and down and looking expectantly up the road. As I started to roll out of the parking lot, I heard my name. They had been waiting for me! I spent a few minutes chatting, mostly trying to convince them all to do the Trans Am Bike Race (I am always trying to convince women to do the Trans Am Bike Race, because it’s amazing, ladies!). They all shook their heads no way, but I think I saw a glint in one of their eyes.

I was in a great mood while riding out of Baker City. There was another rider in front of me, and as I got closer, I realized that he was nursing a full cup of coffee while riding. Impressive. His name was Ryszard Deneka and he was from Poland. Ryszard had a very nontraditional on-again, off-again pedaling style, where he would spin his legs up for a few seconds using great power, then coast. Then repeat, again and again. I remember that I thought it didn’t look like a very efficient way to ride, and I wondered how long he could keep it up. As it turned out: 4,300 miles.

About mid-day, I reached the general store at the route’s entrance to Hells Canyon along the Snake River. I remembered this stop well from 2016. The owner (who becomes an avid dot watcher during the race) had wanted to complain to me about one of the other riders who had parked his bike on the front porch, and refused to remove it when asked. Talking to other riders and reading their reports later, I found out that he had the exact same conversation with nearly every other rider.

Now it was a year later, and the guy was still there behind the counter, with his iPad. Not even kidding, as soon as I walked in he started telling me about the racer last year who parked his bike on the porch and wouldn’t move it.

As I was leaving, the delivery guy rolling in a pallet of drinks complimented my manicure. Hey thanks, guy.

The next part of the course, which follows a remote stretch of the Snake River, is one of the most beautiful early parts of the race. The river slices the Oregon and Idaho borders. The route meanders alongside the river banks for a while before climbing steeply up to a dam, and then taking a long climb out of the river valley.

By the time I got to the climb, my brain was in full problem-solving mode. The mental rhythm of these races is a mashup of contrasts. On the one hand, there is nothing to do but ride – and the freedom in that is enormous. At the same time, the number of issues that inevitably arise (based on the fact that there is nothing to do but ride) means your brain is constantly busy – sorting food, water, medical treatment, navigation, equipment, and rest. New problems seem to emerge every hour, and figuring out which ones to address and which ones to ignore is all part of the challenge. One benefit of experience is knowing that little things can become big things over time.

At the moment, I had two nagging little things. My right knee was bothering me today – quite a lot. It was an unfamiliar pain and I wasn’t sure what to do about it. I had stopped a couple of times to adjust my saddle, which helped, but didn’t seem to solve the issue. The other, more pressing problem – quite literally – was that I was definitely constipated. Halfway up the long climb out of Hell’s Canyon, I stopped at the store to look for laxatives. No dice. Maybe find some in Council, said the three women sitting at the table.

I finished the climb and tried to poop in a big stand of bushes on the side of the road. Fail.

The descent was fun and fast, and full of swarms of bugs that got in my teeth. I rode through Council, where a dirt detour through town threw me off my laxative-finding game, then started the climb up to New Meadows while I talked to my friend Jill in San Francisco. It was getting late in the afternoon, and the sun was filtering through the trees as I climbed. 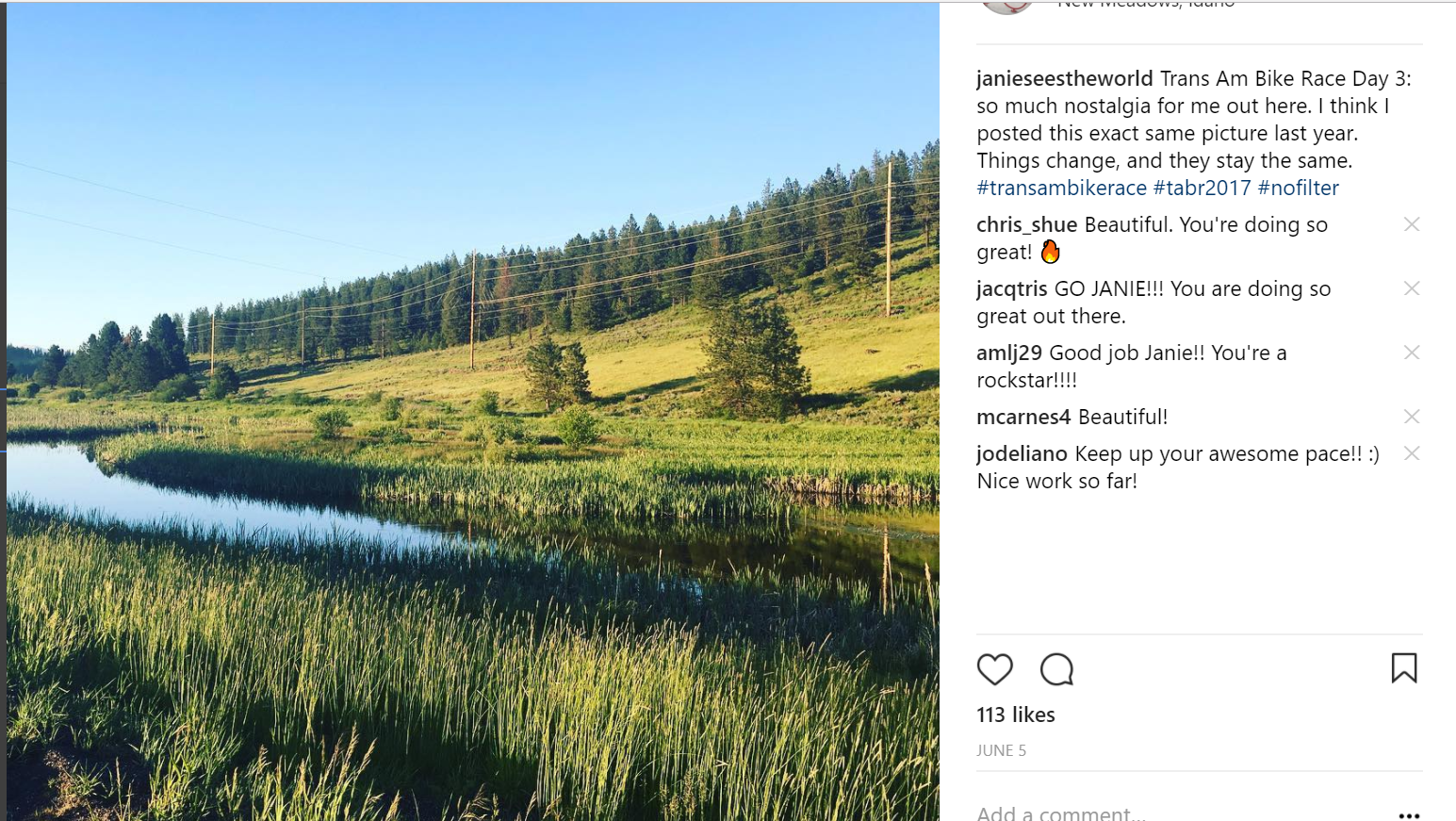 Like last year, I reached the top during the golden hour – but a full one day ahead of my 2016 pace. New Meadows was my scheduled stop for the night, according to my plan, but it wasn’t dark yet. So I set my sight on Riggins.

It was about 40 miles to Riggins, and I rode down the long canyon road along the Salmon River in the dark. The canyon road takes a slight downhill grade for about 25 miles, with rock walls jutting straight up on either side. I have read that this road can fill with logging trucks during the day, but at night there were only a handful of cars. The Milky Way was at its milkiest, and a full moon was throwing incredible shadows onto the canyon walls. Occasionally, if the light was just right, I would catch a glimpse of a giant shadow of myself on my bike looming over the river magnified onto the rock. It was so bright that I could see the whitewater foaming in the moonlight.

I had ridden over 250 miles since I left Prairie City, and needed to sleep. Still, this was a beautiful moment – one of those that tells the whole story of why we take on adventures like the Trans Am Bike Race. You can’t plan for these moments, but you have to soak them in when they come. I tried to steady my mind not to reach for Riggins, but instead to absorb the beauty of what I was seeing and feeling.

Nevertheless, the sense of relief upon reaching Riggins was intense. There was a little cabin I had called for in New Meadows for $35, and it was open for me when I got there. I ate the burrito I had bought in New Meadows, showered and fell asleep.