About 4:30am, with the big moon still in the sky, I rode out of Riggins. I was surprised to discover that the ride down the river canyon from Riggins to White Bird was pleasant. It felt almost opposite from 2016, when I rode this stretch at the end of my long, hard fourth day on the road.

I thought about how my experience of this race at any given moment was directly tied to my physical, mental, and emotional state. What I can see around me is usually a direct reflection of how I feel. When I’m feeling good, a stretch of barren dirt can invoke euphoria. When I’m down in the dumps, I can criticize the universe’s most beautiful sunset.

Despite its overall easterly course, the Trans Am Route was now headed north, where the route goes through northern Idaho before beginning to drop south into Montana. White Bird Hill, the climb out of the tiny town of White Bird, is a Trans Am icon, and for good reason. It’s not the steepest or the longest climb on route, but it’s one of the most atmospheric. Built in the early 1900s, miles of switchbacks on this old road wind up the side of a hill through undeveloped grazing land. Because an adjacent highway takes most of the traffic, it’s possible to climb White Bird and never see a car. 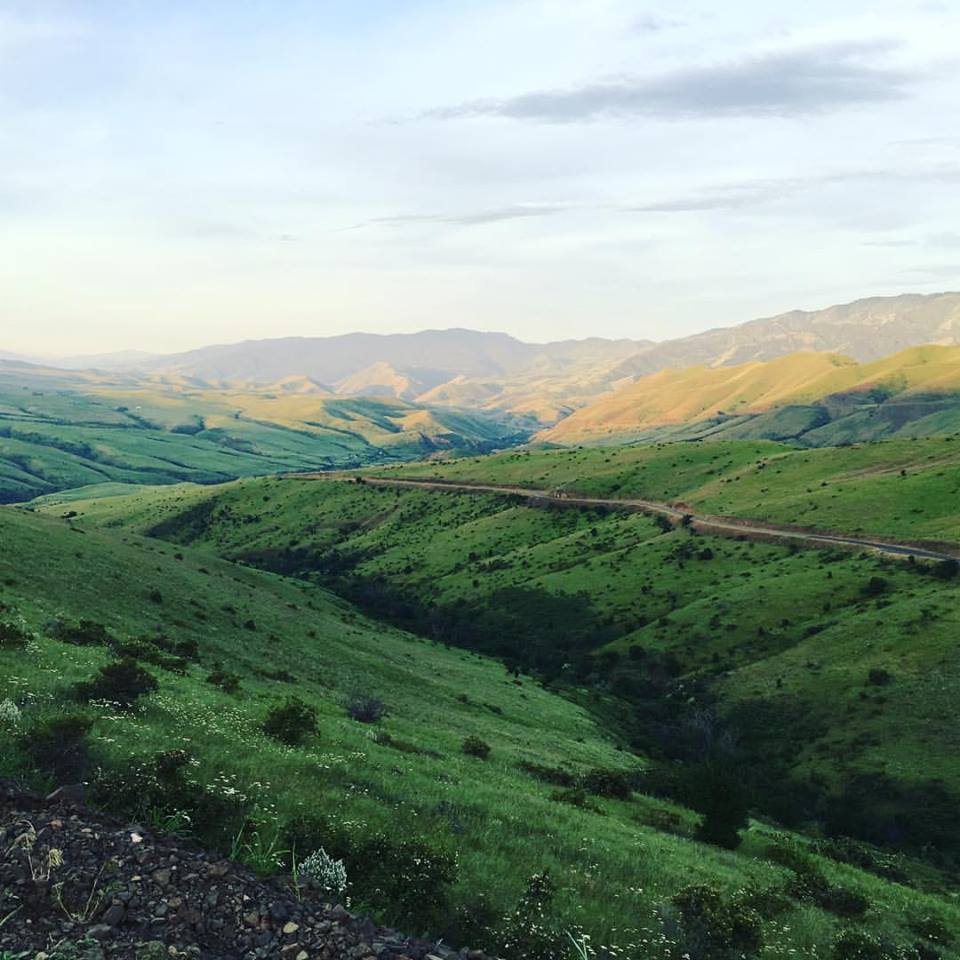 Looking towards the new highway from White Bird Hill

Halfway up, I stopped for a coffee drink, are breakfast, and soaked in the sounds of the morning – which mostly consisted of mooing cows. Coming around a corner, headphones blasting to Eminem, I encountered a herd blocking the road. Hearing my singing, they thought I was a herder and traveled just in front of me for about a mile. 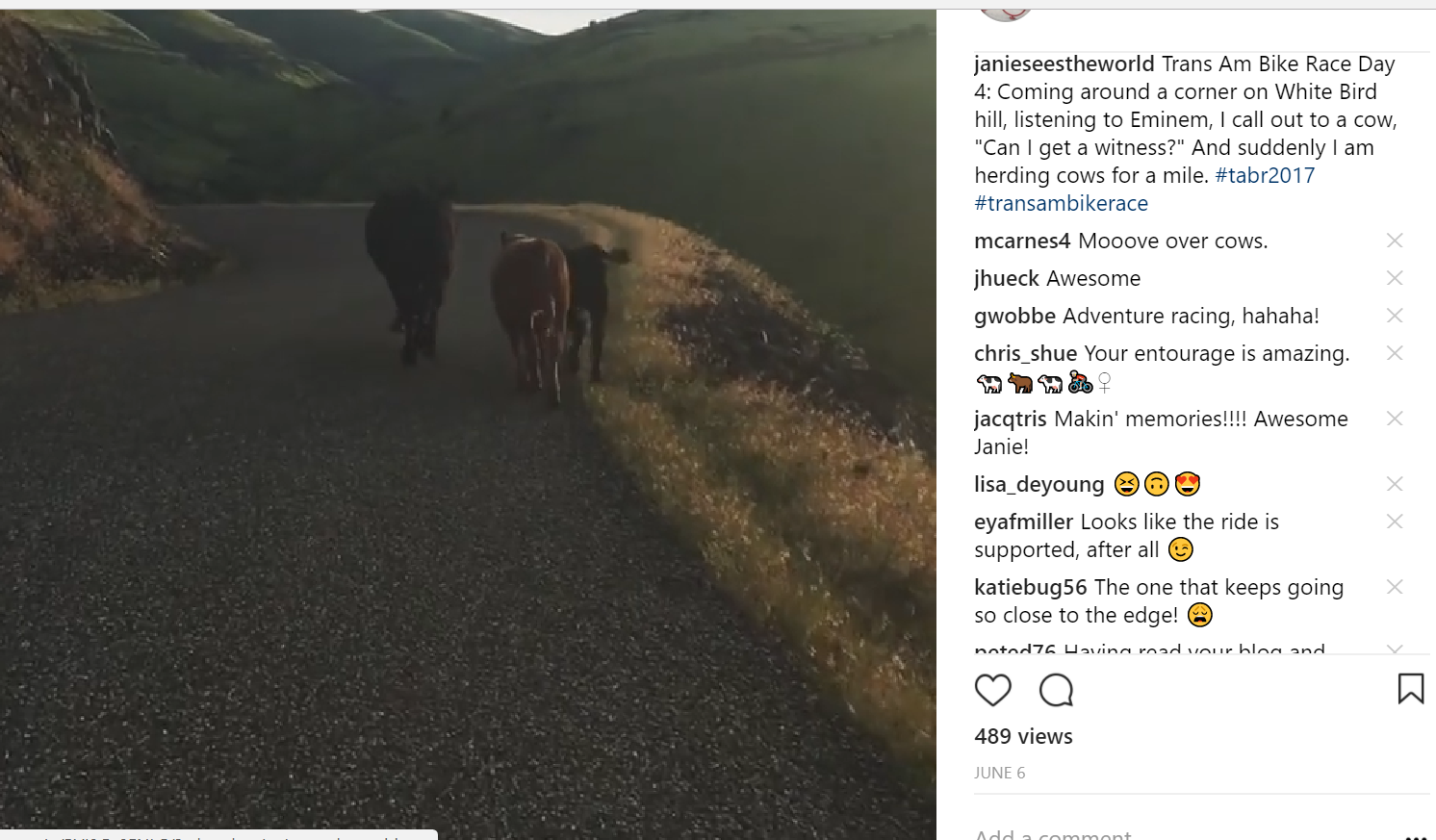 Just beginning the descent down to the little town of Grangeville, I got my first flat and stopped to change it. I was making good time so far today, and in a hurry, so I rushed the change. I blew through Grangeville with just a convenience store stop, and headed out towards the miles of rollers that had to be navigated before reaching today’s major challenge: the 80+-mile climb up the Lochsa River and to the top of Lolo Pass.

It was just around breakfast time. I talked to my husband Jimmy and my coach Greg. About 40 miles from Grangeville, I rolled into Syringa, which is an important resupply point at the mouth of the Lochsa river/Lolo Pass climb. Syringa has a supermarket, which was a huge relief, so I bought laxatives and took a handful more than the recommended dosage. The package promised they would work in 4-6 hours, which would be highly inconvenient given the lack of services for the next 8 hours or so. But, circumstances meant that I didn’t have the luxury of planning for a porcelain throne.

I had lost my headphones by now, too, probably when I stopped to change the earlier flat. I began to wonder whether I was getting sloppy with my decisions. I bought new headphones at the supermarket, which made every song sound far, far away. Then I took a wrong turn out of town, and had to turn around. Getting back to town, I found out that it wasn’t a wrong turn after all, and headed back where I had been.

Finally, I began the shallow climb up the river. For most Trans Am racers going west to east, this stretch is one of the most anticipated (and usually dreaded) of the early parts of the race. It’s a little bit hard to explain why. The winding canyon road is indeed beautiful, and the uphill grade quite gentle until the climb up to the pass with about 8 miles to go. Still, most racers (including myself) are tired by this point, and the monotony can be absolutely relentless. Last year, I had hurled myself to sleep on the riverbank in exhaustion. I think Max Lippe captured the experience perfectly in his race report from this year.

The first few hours were ok. Then it started to get hot. The laxatives did not seem to be living up to their promises, and I was intensely uncomfortable. I had lost sleep for the last two nights because of this, and knew this problem had to be sorted, and soon. I pulled off into the woods a couple of times, but to no avail. Things felt ok in the aero bars, but as soon as I sat up I was in true, actual pain. Nothing to do but keep riding. 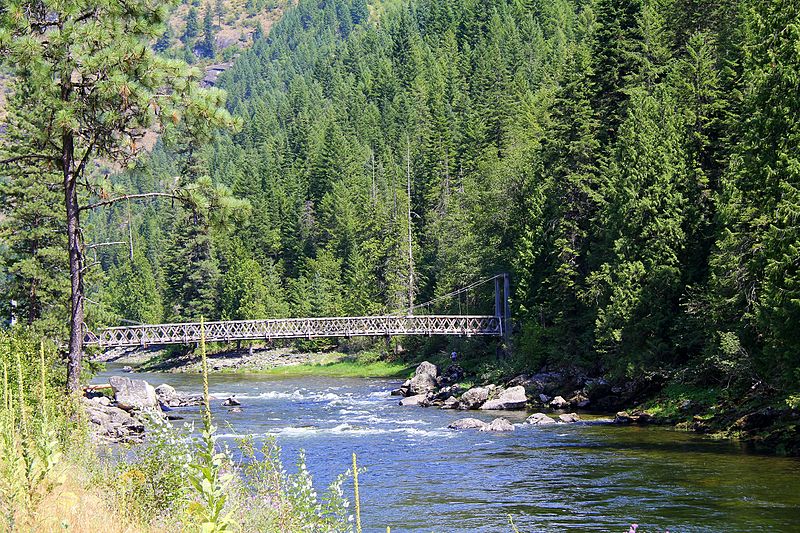 As soon as I got rolling again, the battery on my electronic shifting died – signaling me by refusing to shift gears. Luckily, my Dynamo front wheel hub generates electricity while I am riding. Unluckily, I have to be riding at a good clip for it to provide a reasonable amount of charge. And I was not riding at a good clip. I single-speeded for quite a number of miles – counting them down painfully slowly according to the mile markers on the side of the road. This stretch went on for years, if not eons. I sang, I counted, I pondered on the meaning of life. Eventually I was able to switch gears again.

After the loneliest of afternoons, I reached the Lochsa Mountain Lodge, which is just before the climb steepens for the last handful of miles up to the pass at 5,000 feet. Meaning to make a quick stop only, I ended up doing the opposite. First, I went into the store and talked to the guy working there, who told me that Michael Wacker and Donncha had recently been in, talking about a bird that had pooped on Donncha. Given the tedium that I had just endured, this seemed like an incident of comedic proportions. Why did some people get all the fun?

I went into the restaurant to find internet and try to contact a bike shop in Hamilton where I might be able to buy tubes. The guy who worked there told me that the internet didn’t work. Even so, I spent an inordinate amount of time trying to connect, of course to no avail. Then I spent an even longer time in the bathroom, also to no avail. By the time I finally completed this myriad of entirely unproductive activities, the guy at the convenience store came outside to tell me, you just got passed. I didn’t care, but was irritated anyway that he made the point of letting me know.

As I neared the top of Lolo Pass, I saw a figure pulling on a jacket. Luke Kocher! After this day of utter loneliness and tedium, I was thrilled to see another racer and it immediately changed my mood. Last year I had a similar encounter with Brian McEntire, so this felt like tradition. We took photos at the Montana state line (state number three!) and chatted for a while as we charged down the pass at about 40mph. 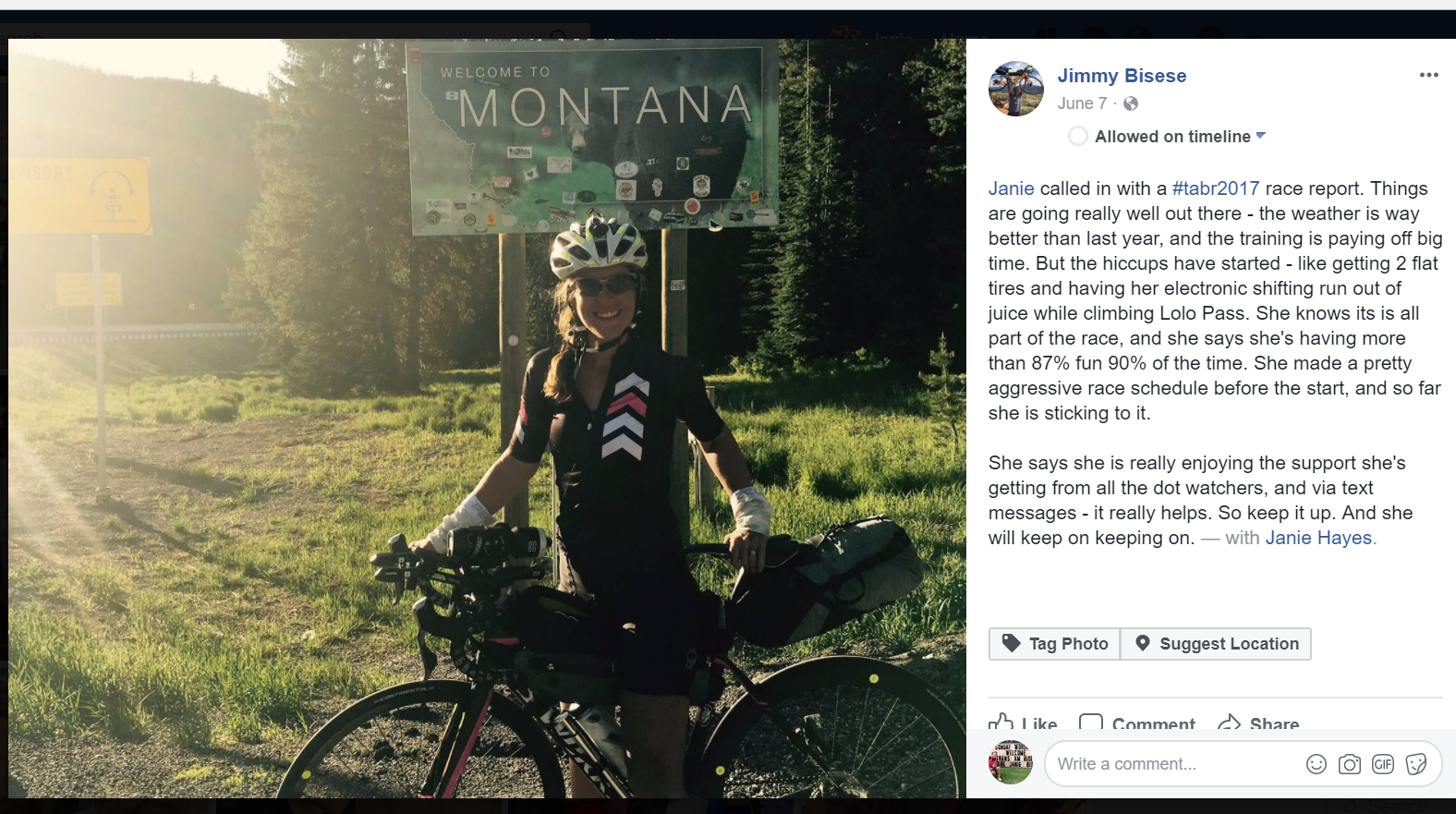 Coming into Lolo, I got a message from Donncha that he was in the McDonalds in Lolo. My genius spreadsheet, which I had not followed yet, had me stopping in Lolo for the night, and I decided not to press on. It had been a long, hard day already. I needed rest. I stopped in McDonalds and found Donncha sleeping upright in a booth, empty fries container and burger wrappers on the table in front of him. When I woke him up, he was wild-eyed and chatty and told me he planned to ride into the night. I thought about joining him, then decided that sounded like a bad life decision.

I was exhausted falling into bed that night. My right knee was throbbing. I set my alarm for 4am. It could only get better, right?