I got on the road early, though not as early as I wanted. I think it was around 4:30am, definitely before sun up. Last year I slept in Lolo and rode the wrong way almost to Missoula before realizing my mistake. This year I felt almost smug just for knowing the correct way to go out of the hotel parking lot (right!). 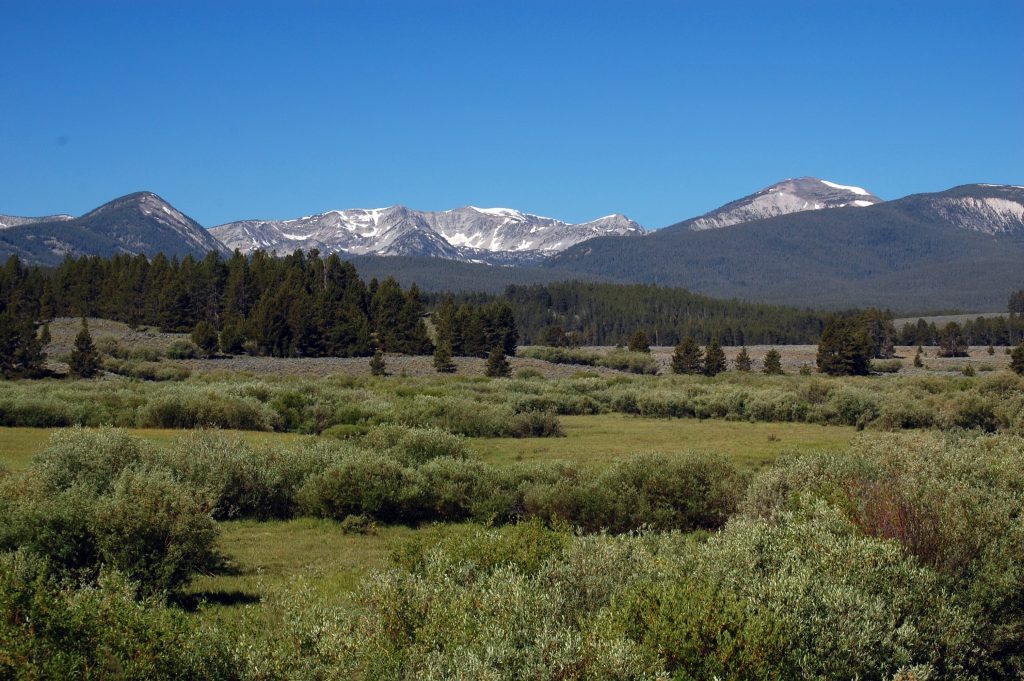 From Lolo, the Trans Am course follows a long valley, dotted with small towns, with a meandering bike lane beside the road. The biggest weight on me (in more ways than one) this morning was this constipation issue. I had lost sleep again the night before. To preserve my race, and my sanity, I needed to figure this sh*t out.

At the town of Hamilton, I knew where the grocery store was, because last year I stopped there to buy every product known to man that could possibly mitigate my saddle-sore pain. As I rolled into the familiar parking lot, it wasn’t lost on me that I was back at the same place to address another unspeakable ailment.

It was about 6:30am, and I stood dazed in the “gut health” aisle. There were no other customers in the fluorescent-lit store, and only one cashier. She smiled and said good morning. I bought a fast-acting laxative and took a double dose at the water fountain, and then roamed around for a few minutes waiting for it to work – hoping she wouldn’t notice my loitering and put #2 and #2 together. Despite having no customers, there seem to be hordes of employees. They were all friendly and noticing me too much, while I fake-looked at magazines, wearing my bike helmet and waiting for the laxatives to work.

After about 20 minutes, I conceded. The truth was looking me in the face; I only had one option left. I cringed as I considered it, walking slowly back to the “gut health” aisle. The enema box was huge. There was no way, I thought. No. Way. Yep, the other part of my brain told myself. It was the only way.

I sighed heavily and headed back to the checkout.

But not before being waylaid near the produce section by an older gentleman. He wanted to tell me about a mountain bike his friend was selling. Did I know anyone who wants to buy this bike, he asked. I said no, and that I wasn’t even really from around here. I held the giant box awkwardly behind my back. Well maybe you’ll think of someone when you see these photos, he said, blocking my path. I waited there while he pulled up Craigslist and spent a while searching for the ad on his old phone. I squinted at the photos as he scrolled through and thought, that’s a really crappy mountain bike. But I just said again – more firmly this time – no, sorry, I didn’t know anyone.

I paid for the enema and smiled at the cashier, intentionally making eye contact, like oh hey, I do this all the time. Inside, though, I was mortified. I’m not really sure why. I’m not squeamish, or one to particularly respect taboos. My grandfather was a rectal surgeon, and as my mom reminds me, used to publicly refer to himself as the “rear admiral.” I have a job with a global health nonprofit where I advocate for solutions to prevent diarrheal disease in children in developing countries. Still, this was out of my comfort zone – in more ways than one. Not to mention it was a pretty serious impediment to being out there in the race, banging out miles on the road.

I was sure the cashier was watching my back as I walked to the bathroom. The whole process took about ten minutes. It worked like magic – or so it seemed (I do realize that it’s science, not magic. But still). I was so excited that I yelled out loud in the echoing bathroom, “It worked! It worked!”

I rode out of Hamilton with a giant smile on my face – also mildly irritated with myself that it had taken me three days to solve this problem, but mostly happy. The whole world suddenly seemed different, and better. I crossed paths with Michael Wacker for the first time since our night one encounter, and surprised to see me, he told me that he had met Jimmy last year on that exact same stretch of road. Coincidence? No. Serendipity! It was a good day.

Michael and I both stopped at the store in Syringa before the climb up Chief Joseph Pass, and there were a couple of dot watchers there cheering for us. I talked with them and they took photos with me and Michael. I was in a great mood. Michael and I rode up the pass together. We talked about riding, about self supported racing, and the ubiquitous conflict between racing and absorbing the adventure as a personal experience. We talked about his need for redemption after starting the Trans Am twice and being unable to finish due to circumstances largely out of his control. I told him about the enema. We also talked about pizza.

At the top of the pass, which is one of the route’s many Continental Divide crossings, social hour was over as Michael dropped down over the other side into the Big Hole Valley like a stone. By the time I arrived in Wisdom he had already blown in and out of the store – but I found Luke there eating. It was getting hot, and the notorious mosquitos of the Big Hole were out in full force. I loaded up and started the long flat mosquito-infested ride across the valley and then the climb out from Jackson. Luke was in front of me most of the way to Jackson. This stretch is beautiful, but it can also feel eternal.

Starting the exposed climb out of the Big Hole Valley, Luke had disappeared. But what I could now see up ahead was a massive lightning storm rolling in – and fast. Suddenly I was in the middle of it: hail, driving rain, a massive headwind. I saw lightning strike into the field on my right, but there was nowhere to stop and hide.

At the top, I made a left hand turn and was relieved to have finished the climb, but as it turned out, the descent was even scarier. Water was pooling on the road, inches deep, and the tailwind now made it hard to slow down the bike enough to control it. The scenery from this vantage point was so vast that I could see where the storm would end. I focused on that point.

Finally, I made it out of the rain, waterlogged but relieved. It was suddenly so quiet on this lonely stretch. A pickup pulled up beside me with three guys in front. Where are you from, they asked. I said Colorado and then they said “oh, okay” and then drove on. 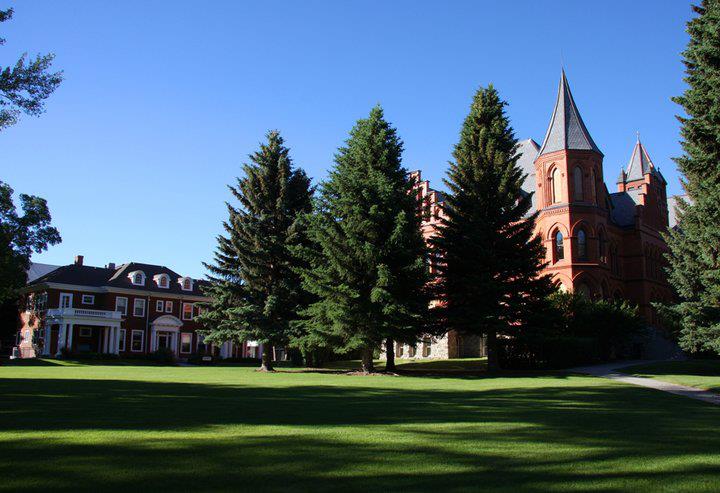 Manicured lawns of the university in Dillon. Source

Descending into the college town of Dillon, Montana, I stopped at the Pita Pit and asked which sandwiches were fastest to make. They said chicken, so I ordered three. It still took a while, and when she handed me the sandwiches they were huge and weighed about ten pounds apiece. I ate a whole one while I rearranged everything to make room to carry the other two.

It was getting to evening now, and Donncha had called to say he was up the road a bit. I told him to soft pedal if he felt like it and we could ride together. I was tempted to call the day short and stop in Twin Bridges, but the idea of having company made me pretty sure I could push on to Virginia City – which was where my plan had me stopping tonight. After three days of exceeding my daily mileage targets, it has been tough to meet them the last two days, but I was determined to stick with it as long as possible.

Donncha was spinning easy on the road to Twin Bridges, so I eventually caught him. We watched the sunset and chatted, and said how it looked like it was going to be a beautiful night to ride, with even a tailwind breeze if we were lucky. Unfortunately, just about the time we made the turn south at Twin Bridges and it started to get dark, a nasty crosswind picked up. The ride to Virginia City from Twin Bridges was only about 30 miles, but uphill and into a squall that kept spitting rain and pummeling us into the road, sometimes dramatically. Turns out that the crosswind was just a foreshadowing teaser for headwinds starting tomorrow that would not let up for days. 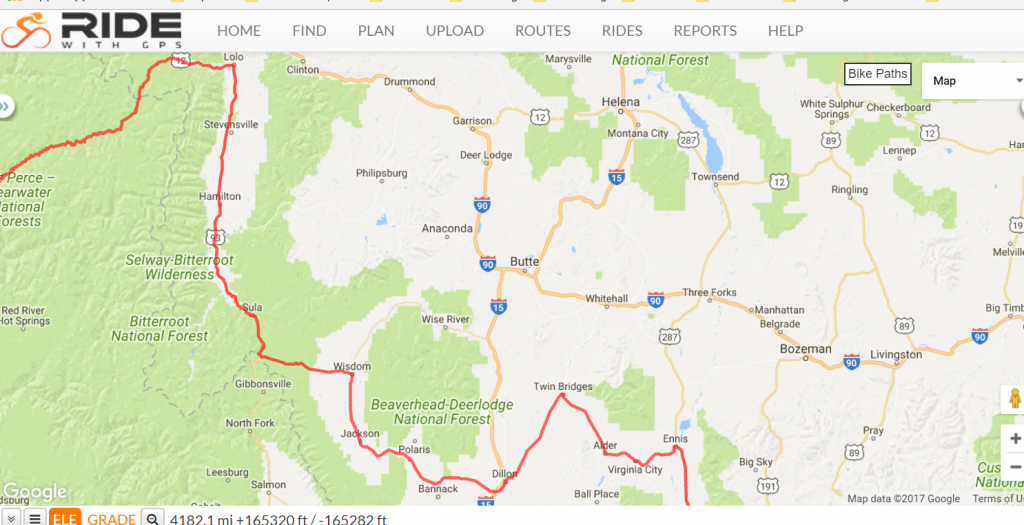 It took us a long time to ride that 30 miles, but we made the most of it. We counted down the miles. We complained about our legs. We played the “ask me anything” game, which led to discussions of family and religion and food. When the wind or rain became particularly brutal, we said sarcastically to each other, “No matter what happens, at least we’ll always have this time together.” Donncha talked to his brother on the phone for a while, and I rode up ahead.

Around 1am we made it to a bizarre bed-and-breakfast inn in the equally bizarre ghost-town-turned-western-tourist-town Virginia City. There was no one at the front desk, but the lady had promised him two rooms, though only one had a shower. The building is cut up into many passageways and levels, and it took us a while to find the right rooms. Being the gentleman that he is, Donncha had promised me the shower first. But when I finally located my ornate room with a flowery bedspread and a sink but no bathroom, I heard the shower running next door. When he was done, I gave him a hard time, but he said he had done it “because I know I’m quick, like. You probably take longer.” I showered in about a nanosecond, and we decided to leave together at 5:30am.

I ate the third pita, careful of the flowery bedspread, and slept well.