I woke up encased in the wood-paneled room at Togwotee Mountain Lodge, part of the way up Togwotee Pass. The chilly mountain air was spilling in the open window. It made me think of home in Colorado.

I rolled out the gravel parking lot, rocks cracking under my tires, into the cold morning, the sun up but barely. I was about 35 miles behind schedule, but a lot of it was downhill. I finished the climb up to the summit of the pass, my legs feeling pretty good and thankful for the few hours of rest. I whooped and hollered down the fast and long descent into Dubois, arriving around breakfast time. I stopped into the convenience store, which was next to the grocery store where last year I had spent ages treating my saddle sores. I was thankful that this year my problems seemed more fleeting, although – in addition to the nagging knee pain I’d been dealing with – yesterday my right Achilles had started to ache when climbing. This worried me, as I had already seen reports of other riders dropping from severe ankle pain. 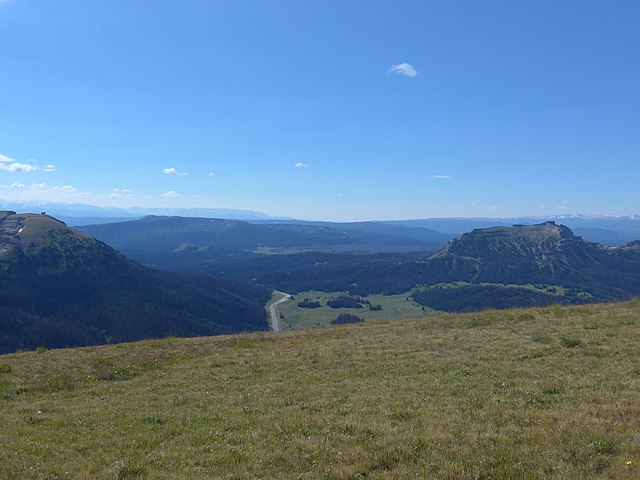 There was a bit of a tailwind as I left Dubois. The 75 miles from Dubois to Lander and through the Wind River Reservation are spectacular, and a welcome net downhill. The Wind River Mountain Range sits to the right, and red rocks jut up to form canyon walls beside the road. 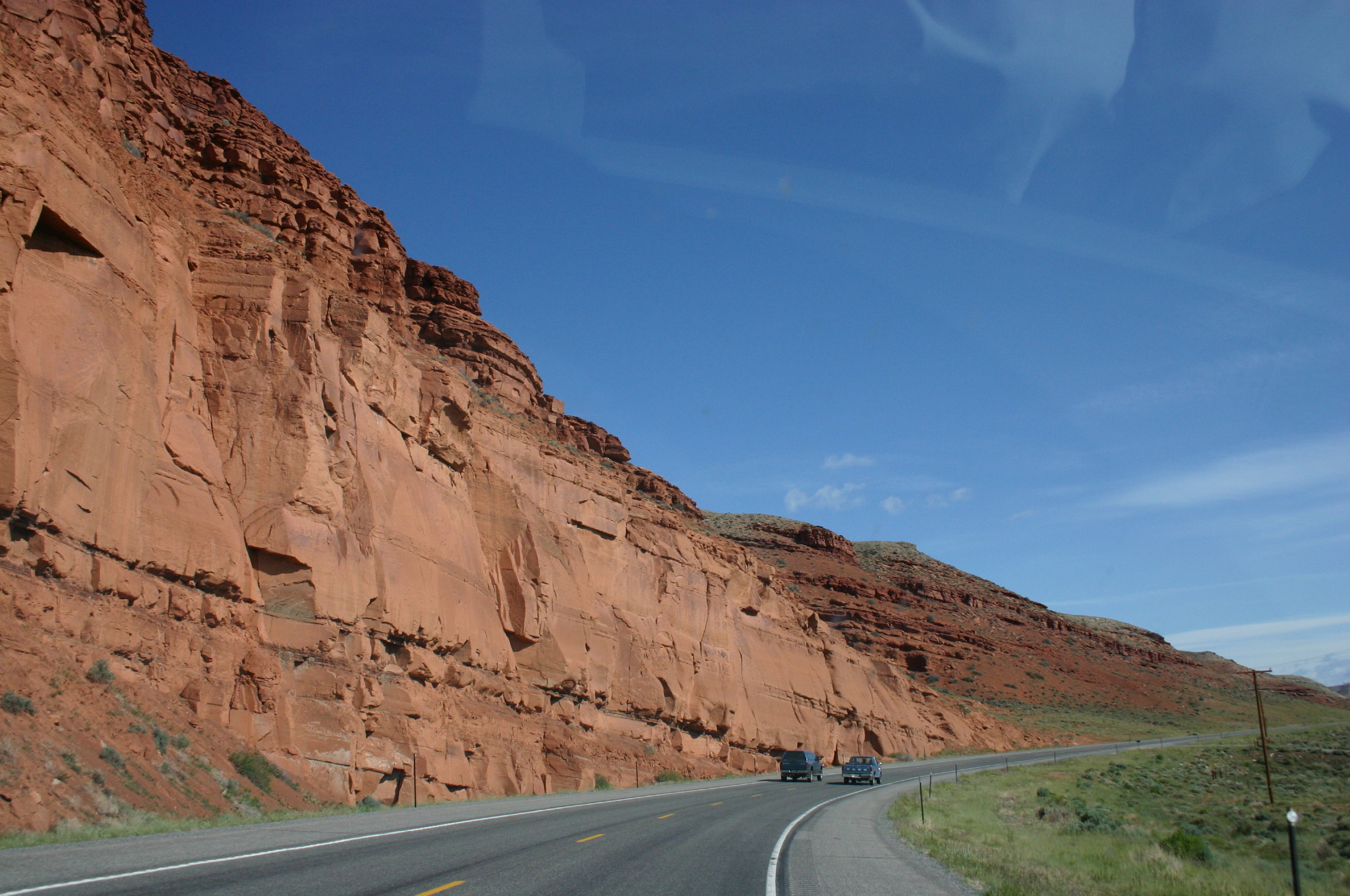 Coming into Lander, one of the employees of Gannett Peak Sports bike shop joined me, and it was great to have the company of a Trans Am fan for a few miles. We rolled into the bike shop on the main street through town. I used their pump to air up my tires, which were embarrassingly low, and I think they gave me an ice cream sandwich. I complained about my Achilles. One of the guys who worked there, who had raced the Tour Divide the year before and suffered from Achilles pain, told me to do downward dog occasionally. I told him I would plan on it. On the way out of town, I stopped in at McDonalds and loaded up for what I knew would be hot ride towards Rawlins. 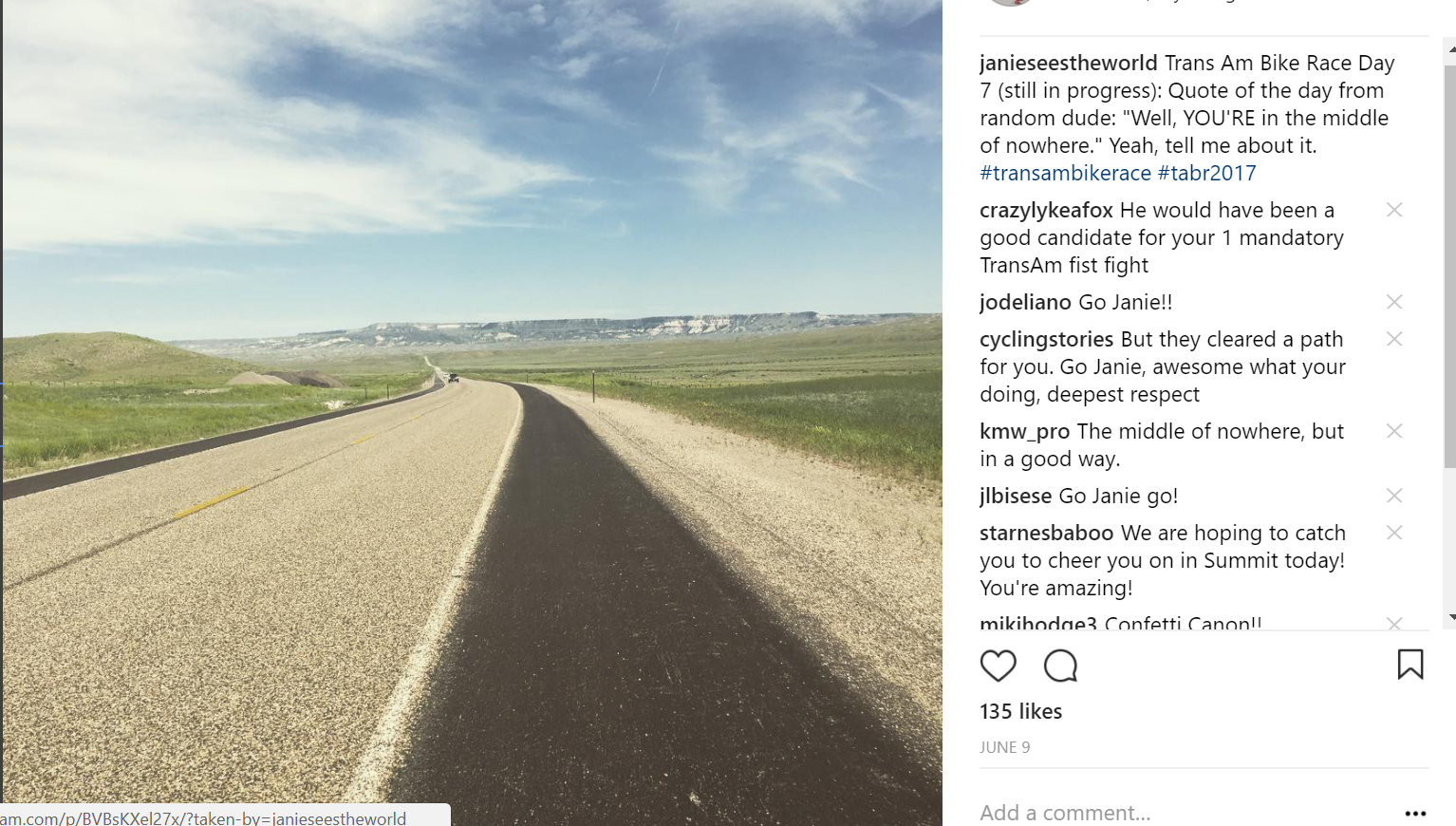 The next section was tough. What had been a strong tailwind all morning turned into a strong crosswind as I made the climb up to Sweetwater Station. The crosswind was so strong that a few times it blew me out of the shoulder and into the road. By the time I got to Sweetwater Station, which is little more than an excuse to stop for a break, I felt battered. I sat in the shade at the public rest stop and ate a hamburger.

I was dreading the next 90-mile section. From Sweetwater Station, the route heads about another 40 miles southwest, through the tiny town of Jeffrey City. At an intersection called Muddy Gap where there is an important convenience store, strategically placed, the road takes a decided turn due south for the remainder of the road to Rawlins. This section of road is characterized by truck traffic, a disintegrating shoulder, and a rumble strip that gives the rider only a couple of feet to ride on between slippery sand and the brain-jarring rumble strip surface.

It was late afternoon when I made my way towards Muddy Gap. I knew I was in danger of not making it to the convenience store before it closed, and there was no cell service so I couldn’t find out for sure how late they were open. I decided to stop at the bar in Jeffrey City. It was dark inside, and only one customer, a local friend of the bartender/cook. I ordered two club sandwiches with French fries and a coke. While the bartender was cooking my sandwiches, the other guy would go behind the bar and get me another coke every time I finished one. I must have had five.

The bartender finally brought me my sandwiches, wrapped nicely for transport. I took everything outside then went back inside to the bathroom. When I came back out, a dog was just eating the last of the second sandwich. She looked so guilty and happy that it was hard to be mad. I went back inside, ordered two more cokes and some chips. That would have to do.

When I got to Muddy Gap, the store was closed. I made the right-hand turn to Rawlins as it was getting dark. There was a beautiful moon rising to my left. I noted how beautiful it was and hoped it was a harbinger of pleasant things to come.

Last year, this stretch to Rawlins was almost my undoing. And as luck would have it, the moon was a mockery because this year would be even worse. Instead of dying down as it got dark, the wind seemed to pick up, becoming a ferocious head/cross wind from the southwest. It was getting dark and there were big trucks on the road. I was tired, and kept looking for places on the side of the road where I could sleep, but I knew if I did I’d have to get up and face the wind again anyway. I might as well make as much headway as I could before hurling myself on the side of the road.

At the time, it seemed like there would be so much to say about those miserable hours. How scary, how rotten, how unfair. The stories I was telling myself about my own persecution were absolutely legendary, believe me. But now that I think about it, there’s really not much to say. I ended up riding all the way to Rawlins that night. It was terrible. For about four hours I averaged less than 10 miles per hour, and most of that was on a flat road. Counting down the miles. Craning my neck to see whether the lights of oncoming cars might signal some small change in the road’s direction, something that might give me hope that I would soon get to turn.

There is a long climb before Rawlins and it never ended, I mean never, and of course there was a headwind on the descent so I couldn’t stop working even then. A bit chastened (by myself) for all the money I had wasted the night before at Togwotee Lodge, I called the cheapest hotel in town, but when I got to Rawlins, 2am and windblown and broken, I couldn’t find it. I rode towards the other side of town and pulled into the Hampton Inn. It was too expensive, too, but I couldn’t bring myself to care. The computer system was down and the check-in took forever. The hot water didn’t work in the room. My Achilles was too painful to put under the pressure of the sheet.

Certainly tomorrow would have to be better.