I woke up in the Hampton Inn feeling like death. It was still dark as I rolled out and the night manager who had checked me in was still there and gave a double-take when he saw me.

I called Jimmy as I rode out of town, before the hectic stretch on the highway shoulder before the climb up to Saratoga Springs. He was getting ready to ride 100 miles to pick up a friend’s car in Alamosa. I told him he should go further.

Last year I had a spate of flats on this stretch to Saratoga Springs, but this year I made the descent into the little hot springs tourist town without major incident. My Achilles was still hurting today, but didn’t seem to be getting worse. The south wind was picking up, though, and I was still a bit shell-shocked from the night before. In Riverside, a small town past Saratoga, I stopped at a convenience store and ate a breakfast sandwiches while I watched a broken-down car in the middle of the road with its horn stuck on.

It was about 9am and I was already sleepy, so I downed a 5 Hour Energy shot, and took two for the road. I hadn’t been heavily relying on caffeine so far, and for some reason had been resisting the 5 Hour Energy (I think I thought it seemed somehow trashy, which now seems hilarious that I thought anything was beneath me, given my state). But it seemed that time might have arrived.

The rest of the morning was an eternal, windy slog to Walden. The ride was very tough – especially after last night’s travail into Rawlins, but at least the scenery was looking more like Colorado (home!). My saving grace on this stretch turned out to be the heavy shot of caffeine straight to the brain. My body was tired, but my brain was wired – keeping my sufficiently focused and preventing me from seeing every ditch as a potential nap spot. When I finally spotted the wooden sign at the Colorado border, I stopped and a nice couple took my photo. (Unfortunately I can’t share that photo with you, and I’ll tell you why soon.)

Carrying on towards Walden, the wind just kept picking up. Just when I would think it couldn’t blow harder, it turned out I was wrong. Like the previous night coming into Lander, I felt persecuted by the conditions. It was just so personal. Why would the world do that to me, after all that I was going through? It never occurred to me that others might be suffering as much, or even more, than I was. It was pretty much just all about me. 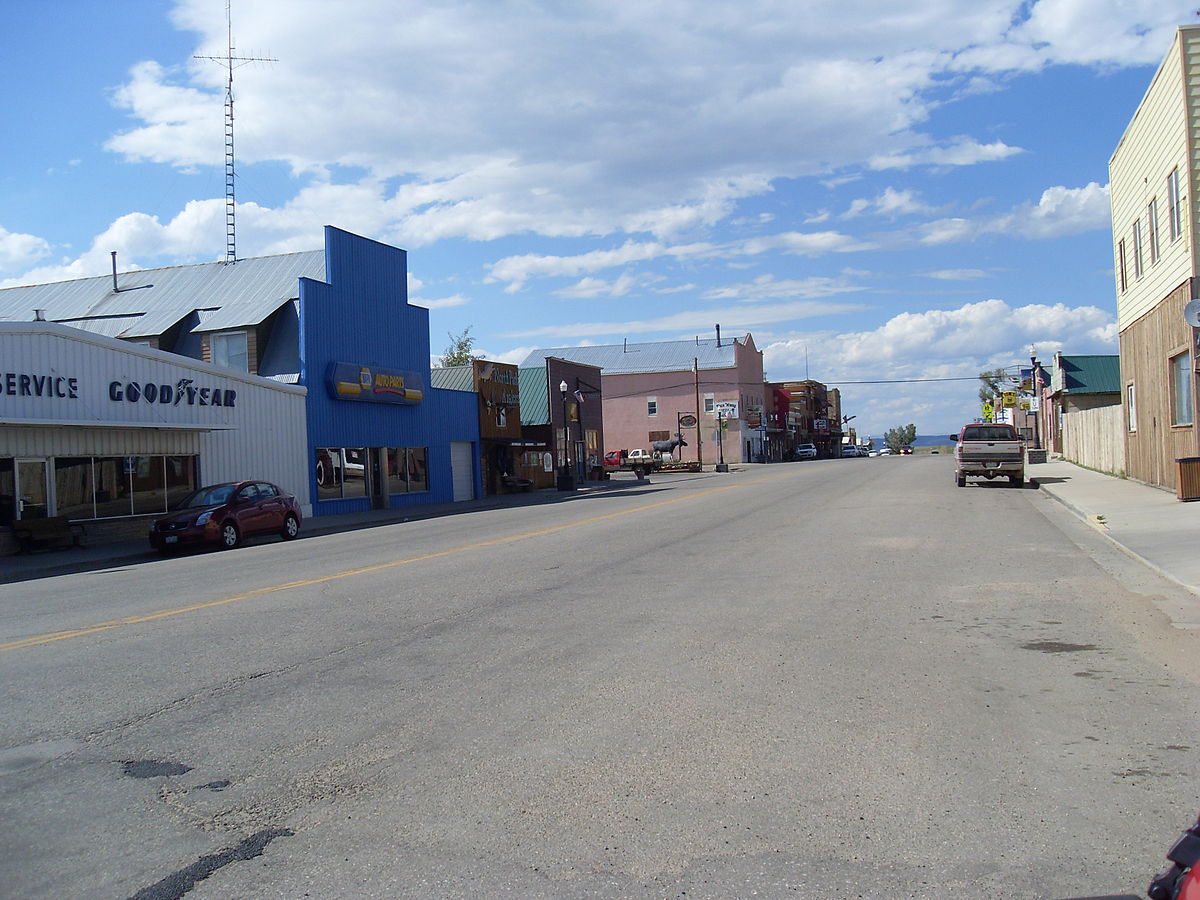 I pull into the grocery store on the outskirts of Walden after what seemed like an endless straight stretch. In the checkout line, all the locals were griping about the wind. That made me feel a little bit better; at least I had confirmation by experts that the wind was making an unfair play today. I decided to give myself a bit of time in the grocery store to regroup. My plan had been to make it to Silverthorne tonight, but I needed to accept that the conditions might change that.

I walked slowly to the bathroom. I had my phone tucked in the waistband of my shorts. The moment I pulled down my shorts, I heard the dreaded “plop” of the phone into the toilet bowl. I reacted quickly and rescued it in two fast seconds before it was sucked down. Luckily, it powered back on and I breathed a sigh of relief. Crisis averted. I called Jimmy. He had ridden to Alamosa and was just getting ready to get a ride back to Salida for a beer. I was jealous.

I got back on the bike and rode through Walden and out the other side. The conditions hadn’t changed; the wind was still whipping, and my left Achilles was still throbbing. But mentally I felt better; I settled into my aerobars and told myself to simply accept – not fight –  the next long stretch of pummeling. It was a lonely, low-traffic stretch so I mounted my phone on my handlebars and turned on some disco. I was happy to have gotten through a mental low point, and congratulated myself.

Next – in a moment that won’t soon escape my memory – three things happened at the exact same time. First, my left calf seized in a massive Charley Horse. At the same time, just as I was clipping out of my pedal, I read the words of an incoming text from my mom saying that she had broken her foot and needed surgery. Shit. I put my cramping foot down on the ground, and as I hit the screen to read the message, the music in my ears started slurring and scrambling in a weird cacophony. Then the screen went blank. Shit. I tried to turn my phone on and nothing happened. As I was standing there, dumbfounded, poking my phone and hopping on one foot, a tourist stopped on the other side of the road, yelling a greeting into the wind. I tried to act like nothing was happening – it was all just too hard to explain – and he kept yelling, telling me there was a water cache outside at the shop ahead a few miles and that the wind might change directions in the canyon. I just nodded and kept thinking that my calf was killing me and my mom had broken her foot and my phone might have just been destroyed. After I waved goodbye, there was really nothing else to do, so I got back on the bike and kept riding.

Shit. I couldn’t call my mom. Then I started thinking about all the other implications of a broken phone. No talking, no music, no podcasts, no photos! No photos? I couldn’t bear the thought. The more I thought about it, the worse it seemed. Then, that feeling alone made me feel like a loser. Was I not, after all, a strong, independent adventurer in the wild – capable of sustaining myself by my own mental strength? Was I perhaps, simply, nothing but a human being who craved connection and entertainment?

But I couldn’t stop my brain from screaming: “I JUST WANT MY PHONE!!” At the store with the water cache at the base of Willow Pass, I called Jimmy from the owner’s landline, told him what had happened, and asked him to let my mom know I would call as soon as I could. 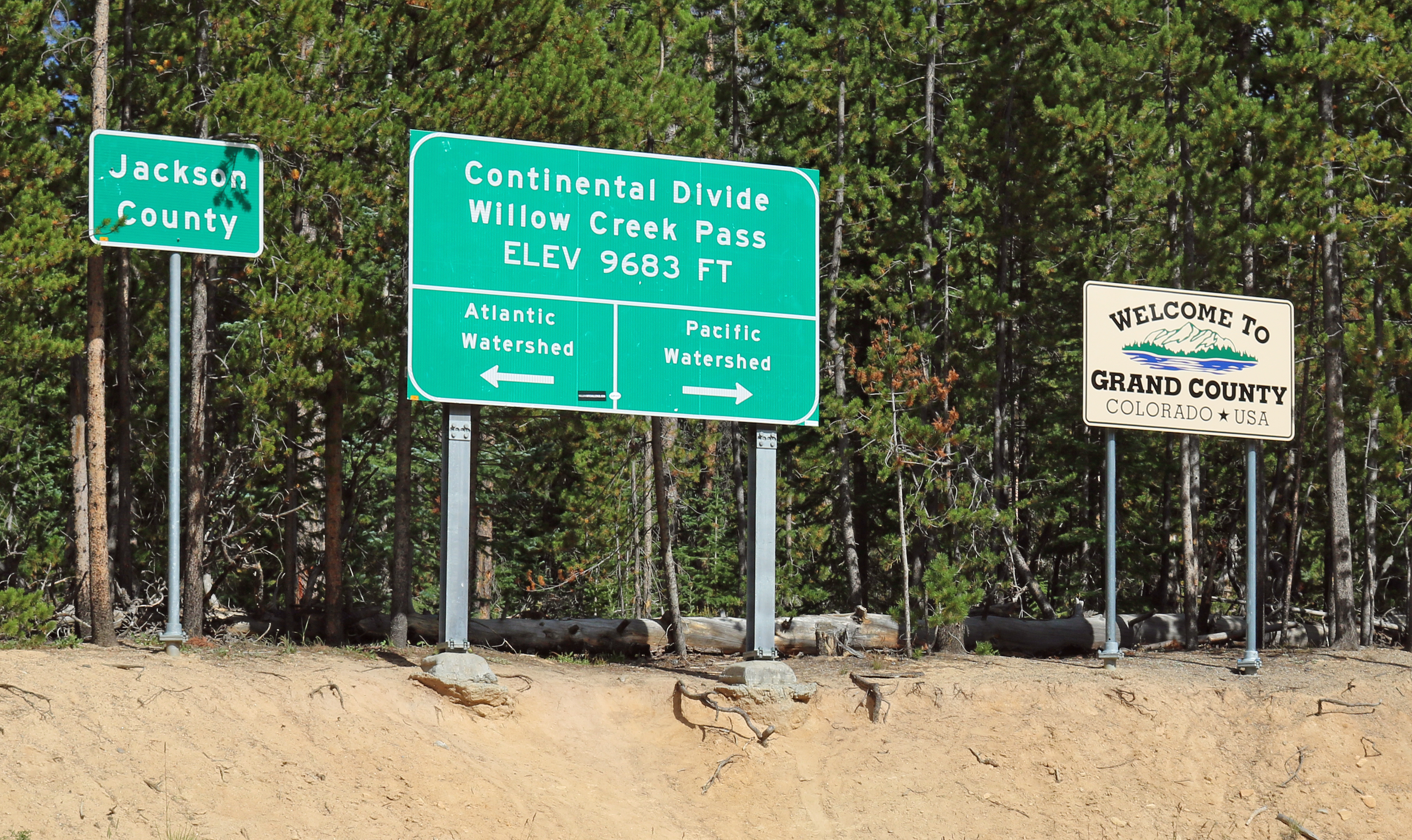 The ride up Willow Pass was lovely, but my brain was troubled. I was irritated with myself for dropping my phone in the toilet, I was worried about my mom, and I was made at myself for not even enjoying my first Colorado mountain pass. On the way down the other side of the pass, I heard my name out of a passing vehicle and my friends Danny and Ann jumped out. They had driven several hours from Denver to see me, and it was amazing that they would make a trek just to see a smelly, dirty shell of a human. They had become avid dot watchers, so they briefed me on the race. I told them about what had happened, and somehow it just felt good to tell someone about my trials, insignificant as they might be in the big scheme of things. 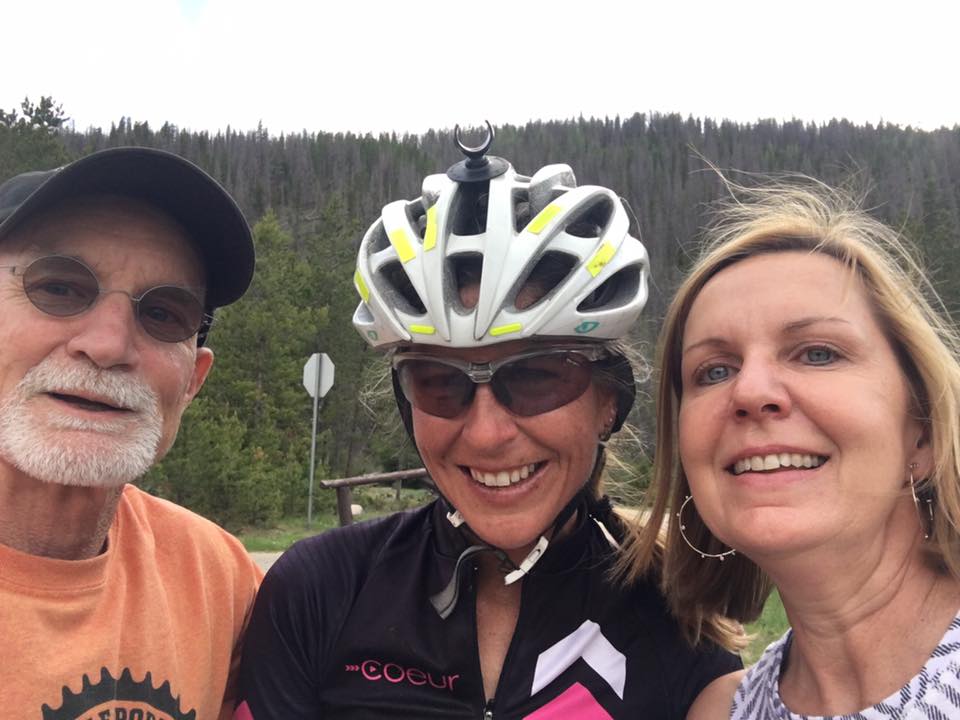 With Danny and Ann

The morning’s hopes of getting to Silverthorne had completely dissipated. I was just too deflated by the last few hours to envision pushing that last planned 40 miles after dark. Stopping early made me feel mentally weak, but hey, just add it to the list, I thought. I was pretty sure that all the time I had lost today – to the conditions and other unexpected events – had caused permanent damage to my race. As I would find out later, I actually had fared well – and other racers had suffered much, much harder fates in that stretch. But in my state of self-loathing I never even considered that possibility.

Strangely, it was a beautiful evening – too beautiful for even my dejected brain to ignore. I grudgingly appreciated the canyon ride from Hot Sulphur Springs, and the last 10 miles into Kremmling past wide open fields as I watched the sun set in a golden sky. It was dark by the time I got to Kremmling, and I went to the Super 8. I was planning to make some calls from the hotel to sort the phone situation, but the land lines were down.

Tomorrow, I determined I would stop this spiral and get back on track. Tomorrow had to be better. Right?