I got out of the old house-turned-hotel in Orday before dawn, but just barely. I struggled to get my bike bags back on my frame. My brain didn’t seem to be working correctly. There was cell service and I checked the tracker before heading out. Michael and Sofiane were about 70 miles up the road, having taken advantage of the nighttime cool weather, flat roads and low winds. Bad luck, illness and injuries had taken out a few top riders in recent days. I think I was about sixth place at the time. The Trans Am is a true race of attrition.

I started riding and the fog was thick. Gone was the chilly, thin mountain air. Here was the early morning warmth of a hot day in a hot place. The quality and temperature made this feel like an entirely new country than the place I had been for the last nine days. I tried to remember all the new things that would have to be considered and planned for and managed across the plains of Eastern Colorado and Kansas. Heat, monotony, and yet more winds.

Poor planning yesterday meant that I didn’t have enough food for the morning, so I had to soft pedal for about 40 miles until I found a place to fuel up. Last year this scenario would have sent me into a panic. From experience I now understood that your body can go a long way without food – just not very fast. Once the fog lifted, the fields glinting in the low morning sun were beautiful and I tried to be content with rolling through slowly. There were still some curves in the road, a few hills left over like leave-behinds from the West, like Colorado still trying to hold onto itself in some small way. The mayhem and frantic pace of yesterday’s mountains felt far in the past.

I saw a touring cyclist on the other side of the road and stopped to ask him about the next services ahead. Then a few minutes later I saw two more riders, stopped to cheer and calling my name. I veered across the empty road to give high fives and carried on. I finally reached Sheridan Lake, Colorado (no lake in sight), which had a crummy selection of drinks and food in an automotive shop. I bought some chocolate milk, Gatorade, and apple pies, and heated up a breakfast sandwich in a rickety microwave that was dangerously teetering on an old shelf.

Mid-morning, I reached the Kansas border. I almost missed the sign but managed to stop for a photo. From here until the end of the day, I knew would be one long, hot straight road, dotted by towns that were visible ten miles away: Tribune, Leoti, Scott City, Dighton. 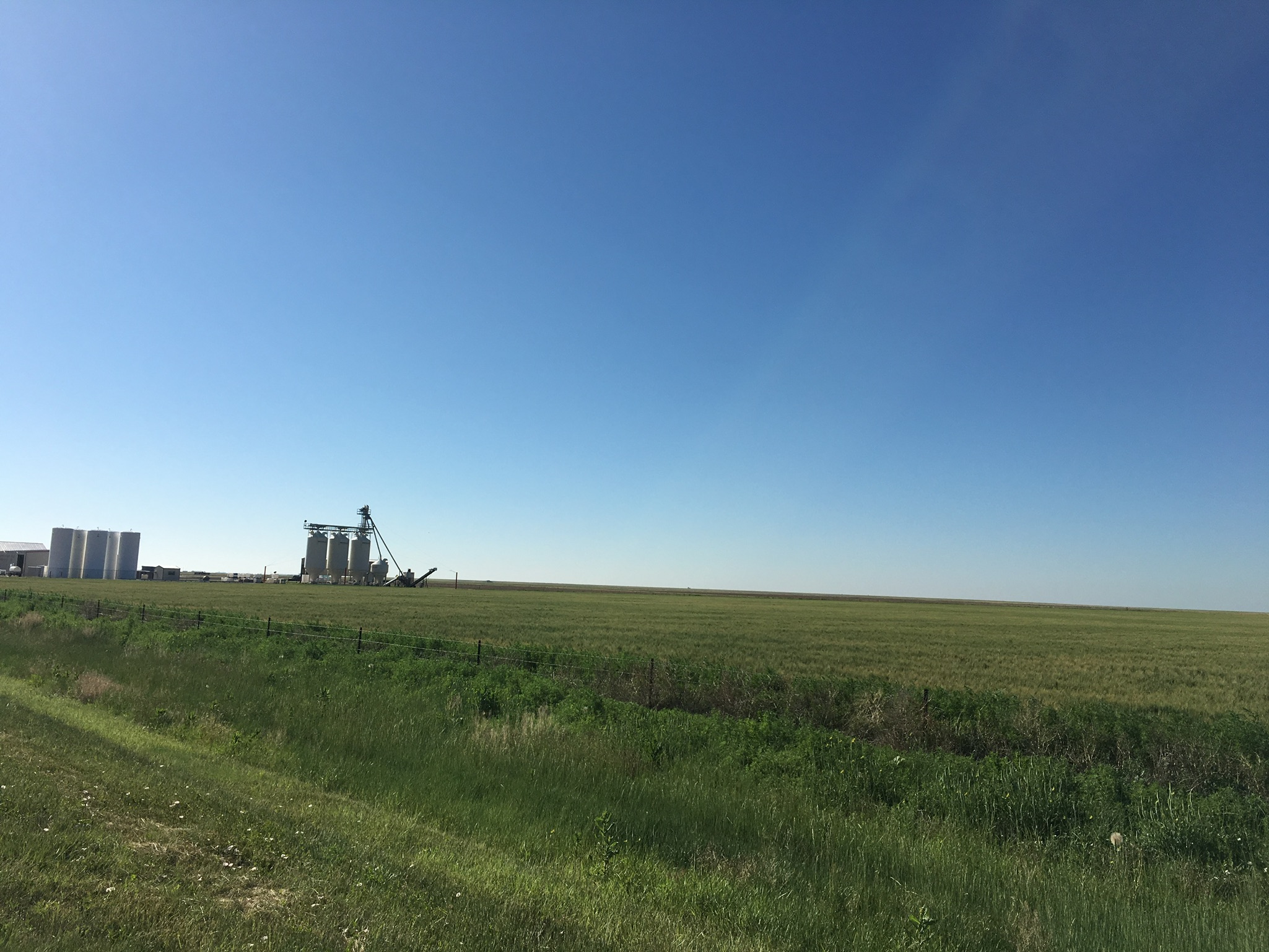 Despite the monotony, there is a kind of pleasure to Kansas riding. No thoughts, no distractions, no questions. Just get into your aerobars and crank. The day before, my Garmin had stopped reading all sensors, so I no longer had power or heart rate data, but I could tell that I was riding this section better than last year. All those winter trainer sessions had my body and mind resigned to hours on end at steady power, turning the pedals over, locked in the same relentless position. I rarely had to stop to coast, just tried to keep the rhythm steady and stay cool. Mentally, I told myself to find peace in the monotony instead of fighting it. I knew from experience that fight saps energy, and can leave you exhausted. 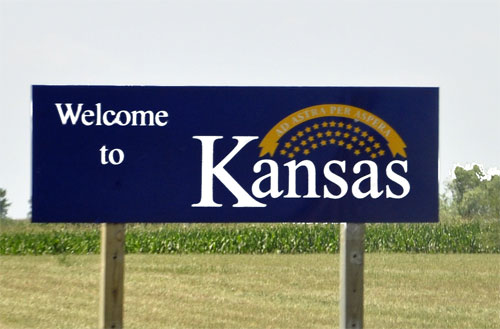 I stopped more often now, and every time I stopped, I filled up two water bottles with Gatorade and another with ice water. Every 10 minutes I would dump cold water on my head and arms. By mid-day I was putting ice in a plastic shopping bag and shoving it in my bra. It melt quickly, but was successful at keeping me from overheating.

In the afternoon in Scott City, I was packing up to leave a convenience store and a teenage kid came up to talk. I was in a hurry, but he had a lot of questions so I stayed to chat for a bit. He said he had always wanted to ride across the country, but didn’t know whether he ever could. I told him he could definitely do it and he seemed encouraged by me saying that. I wondered what it must it be like to grow up in Scott City, Kansas, and have dreams that felt so much bigger.

I pulled out of the gas station without noticing that I hadn’t properly closed my bike frame bag. About an hour down the road, I realized it was open when my battery pack flew out of the bag and smashed on the road, splitting it. Only when I stopped to retrieve it did I find that my precious plastic bag with my paltry selection of toiletries had also blown out previously; it included my contact lenses, my toothbrush, saline solution. I considered going back but had no idea where the escape had occurred. While I was contemplating, the wicked cross wind blew my sunglasses off my helmet into the road. Immediately they were smashed to smithereens by an approaching 18-wheeler. 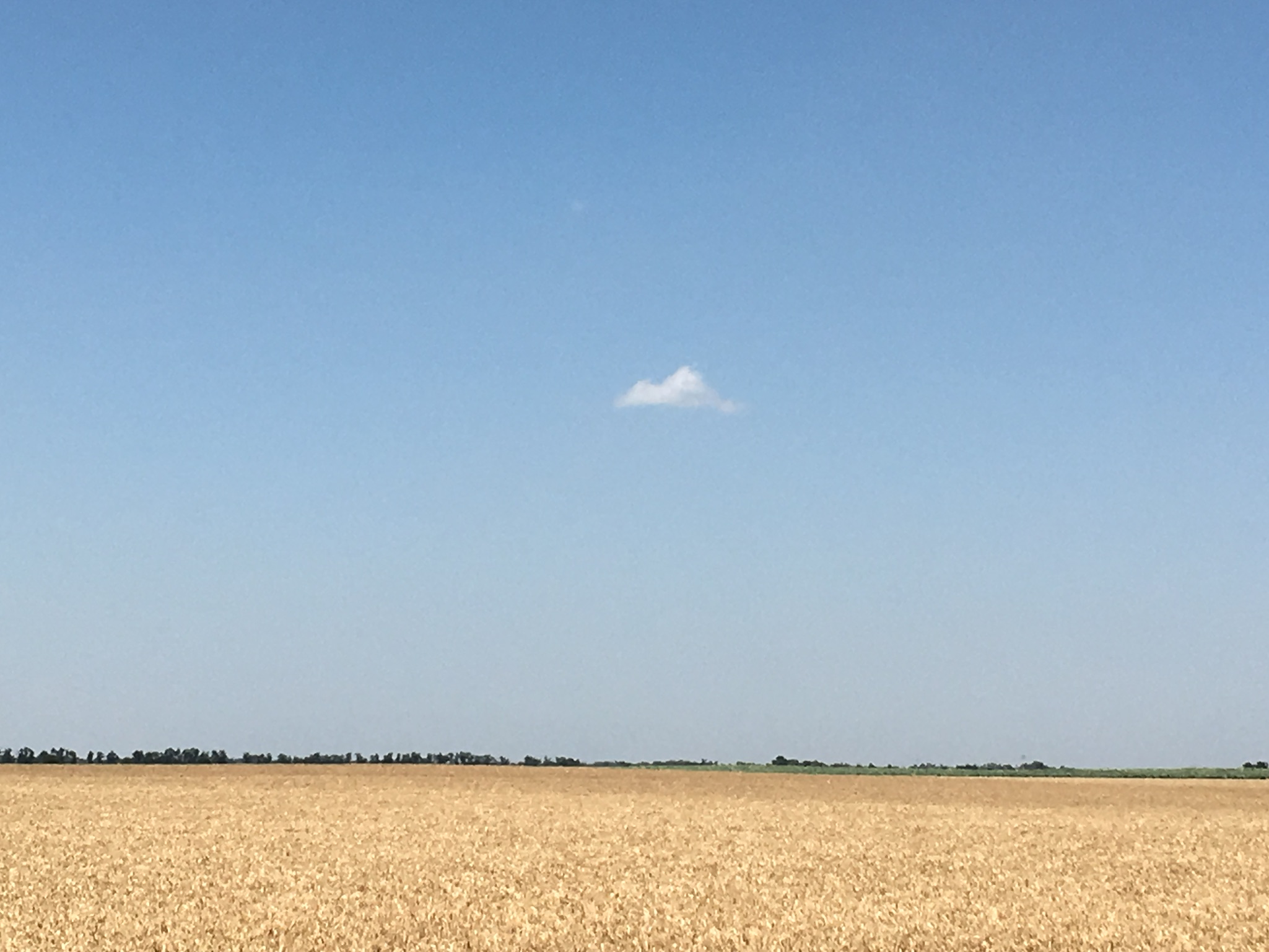 There was no time to dwell. I got back on my bike, a little bit lighter (contact lenses weigh something, right?) and a lot more squinty into the sun. Fortunately, the sun was starting to set as I pulled into Dighton. I got my now familiar burrito and some Twinkies while I chatted with the locals.

Kansans may be the world’s nicest people. While it’s a stereotype, I still feel confident about saying that what the state lacks in variety of geography, it more than augments with friendliness. That evening, people in the store were asking me what I was doing and giving me high fives and thumbs up. The lady behind the counter told me about a big cycling event that came through last week and how much the town rallied around it. They complimented me on my tan and, as usual I told them there were easier ways, ha ha.

The wind all day had been a strong cross wind – but not gale-force, like Kansas wind can sometimes be. But as the sun went down it picked up and changed directions to become a much more massive cross/head wind. I remembered this stretch from last year, riding in the middle of the night with Ben to Ness City. I had hoped that this year conditions would be different, but it appeared I would meet no such good luck. At least the pavement was good and I had some good music cranking. I had enough perspective at the moment to feel thankful about where I was and what I was having the opportunity to do, random as it would probably seem to most people.

You can see the lights of Ness City for a long time before you actually get to them. I remembered this phenomenon, too, and told myself just to be patient and wait for it come to me. Eventually, after one of those many stretches that felt like an eternity, it did come. I rolled onto those cobbled streets of this former boom town, now dilapidated, around midnight. The same family owns the hotel as last year, and the son came out from the back room when I rang the bell. The bedspread felt like cardboard but I didn’t care. I had reached my 220-mile goal for the day, despite the heat and wind. I knew there was plenty more where that came from tomorrow.