When I rolled my bike by the empty indoor swimming pool and pushed open the doors of the Ness City Hotel, the sound of the wind was all I could hear. I sighed. I had known it was going to be happen, but some part of me had hoped that the air would be miraculously calm.

The sun rose as I rode to Rush Center, an intersection that has to be named ironically because it is truly central to absolutely nothing. At Rush Center, the route makes a right turn. If a south wind is blowing, the next 20 miles can feel horrifically endless.

A south wind was blowing.

I knew that Michael and Sofiane were in front of me, but not exactly where or how far. About halfway down this stretch, I glimpsed a cocoon-like shape in the ditch on the side of the road. As I got closer I realized it was a human cocoon, but no way of knowing who it was. I thought how funny it was that seeing a human shrouded in a bag on the side of the road in Kansas didn’t seem like an unusual situation.

I reached Larned and went to a grocery store. With the vast majority of my food coming from convenience store aisles and hot cases, a grocery store had become sort of an elegant alternative. Food options were much more plentiful, but the process was usually more efficient than a restaurant. The main problem was finding right-sized items for transport. In Larned – despite the variety of options –  my eyes were still drawn to the donuts, packaged in boxes of one dozen.

I bought a box. I ate two there in the vestibule of the grocery store, shoppers coming in and out past me, and crammed six more into my seat bag as snacks for the next long, hot straight stretch to Nickerson. Despite my best efforts, I failed to find placement for the remaining four.

I had managed to get started early enough that the worst of the day’s wind hadn’t set in yet, but the heat had made its appearance early. The ride from Larned to Nickerson was hot, with some sections of rough, cracked pavement and an increasing crosswind. By the time I got to Nickerson I was dreaming of air conditioning and had been rationing water for an hour or so. I stopped in at the convenience store and drank slurpees until I made myself sick at my stomach and had to sit down in one of the booths.

It was mid-day and I had 50 miles to Newton. Even though I had only been in Kansas for just over a day, the monotony, heat and relentlessness of the state was getting to me mentally. I needed distraction. I called my friend Sandy and we talked through a training plan for an upcoming 50-mile running race. I hung up and heard my name being called, and there was my friend Travis’ uncle, who had come out to meet me last year. This year he had brought his wife. It was a relief to be able to stop and talk to them at an intersection flanked by cornfields and farm equipment.

I carried on towards Newton, and then, coming up behind me was Michael Wacker, in his Captain America jersey. I hadn’t seen Michael since Chief Joseph Pass in Montana, though we had been lurking around each other since that time. It was good to see him, and we chatted for a few minutes. He was riding faster than I thought I wanted to, so I told him to go ahead. But as I watched him pull away, I had second thoughts. If Michael was riding harder, then maybe I should be riding harder too. At this point in the race, with physical stores largely already tapped out, the idea of “saving” energy for later is no longer really a valid strategy. Once everyone has ridden 2,000 miles, the race becomes primarily a mental exercise. From my perspective, the better racers from this point on are those who can care for their basic needs most efficiently while harnessing that elusive mental focus to relentlessly scrape the bottom of the energy barrel. Because the connection between brain and legs is no longer a given, I was now finding that sometimes I could only ride faster by literally ordering my legs around. Pedal hard. Pedal hard. Pedal hard. Pedal hard. Pedal hard. Pedal hard.

Fortunately, being passed by Michael Wacker had the same effect.

Michael and I both love to time trial, and he looked so strong and steady that I was inspired. What was this wimpy cruising that I was doing, whining about the heat and the wind and the blah blah blah? This was a race, and I should be riding! We were about 20 miles from Newton, and hammering – me about 10 seconds behind Michael. A photographer was at a corner and caught us both; I had a big smile on my face, which makes me laugh to look at now. 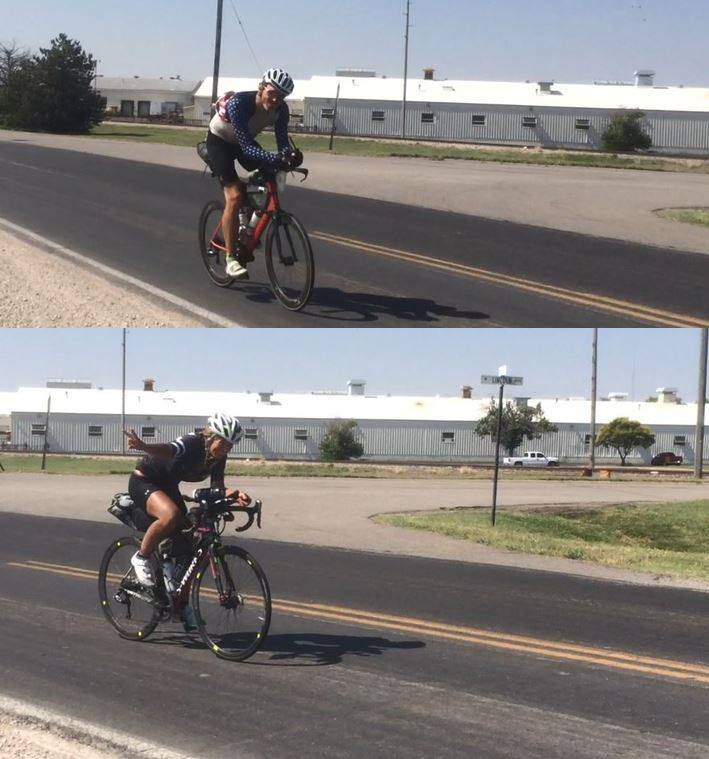 I had to stop to get a drink, but hurried to catch Michael again. I was really grateful to him, just for providing that inspiration – to dig a little deeper, try a little harder, set my expectations a little higher for myself, even if just for that short period of time. People ask a lot why I like to race – why does it have to be a competition, they say, why can’t you just ride? And this is the answer: Because measuring myself against others makes me a better rider and, somehow over time (at least I like to think), a better version of myself.

Michael and I rolled into Newton side by side. Approaching Newton Bike Shop, I said, “Let’s sprint for the door!” and he edged me as we pulled up. Inside, we ate chicken and pasta and basked in the cool air conditioning. James discovered the donuts in my seat bag and did not deem them appetizing. We talked to friends and family on the web cam and people sent funny comments about our antics. Heather had bought me a new pair of sunglasses and saline solution and a toothbrush, and I rolled out feeling just as dirty and disgusting as before, but at least more able to maintain some semblance of oral hygiene.

I forced myself out of Newton after about an hour. If you’re a Trans Am racer focused on covering ground, Newton Bike Shop can be a siren’s call. There are so many creature comforts (and so much fried chicken) that it can be a real struggle to get back to the “real world” of racing your bike across the country. But it has to be done.

It was late evening, and another beautiful sunset in the west behind me was throwing light on the sky, changing colors as I rode. As it got dark, my mind went dark with the night. My ebullient mood from earlier in the day began to sink. What was I doing, I wondered? And why, why was I doing it? I had no good answers for myself. The road was trending up, and I was exhausted, and the wind was blowing in my face. 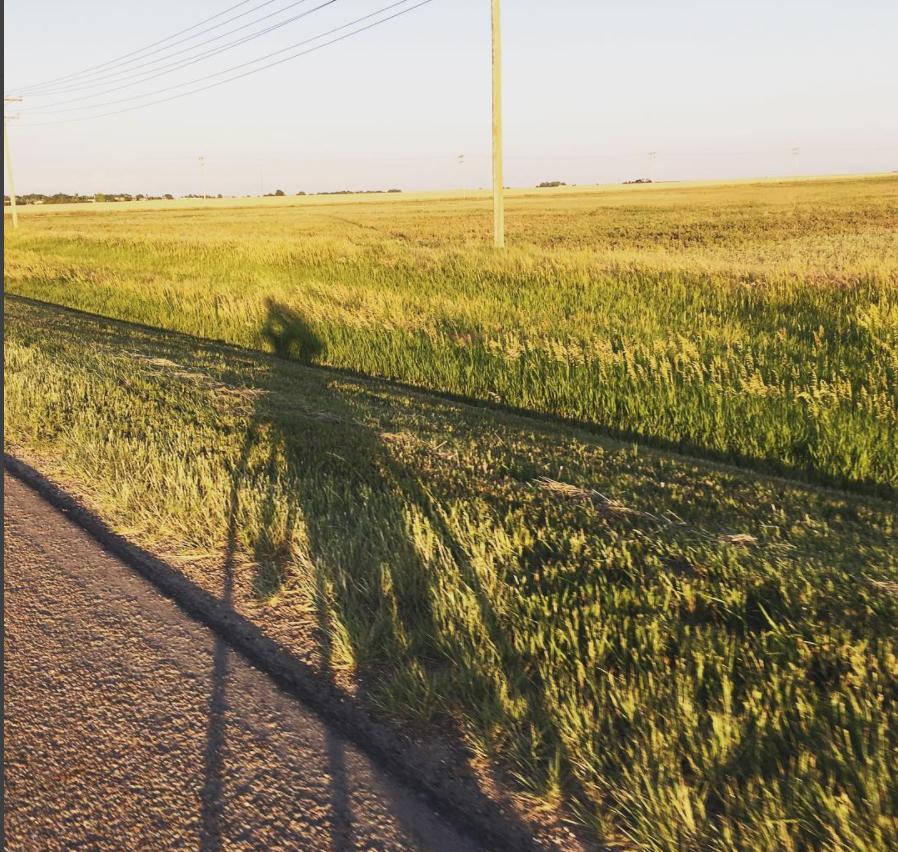 The next 75 miles to Eureka were some of the worst of my entire race. Every five minutes seemed to take an hour. I couldn’t stop staring at my Garmin, and the line on it was not moving. At all. My brain was completely drained, and I couldn’t even think of anything to think about. And then in the absence of thought, I just started feeling mad, mostly at myself.

This race was stupid. I was stupid. There was no point anyway. I was a shitty bike rider, and – come to think of it – a pretty lame person generally. I had done a lot of things in my life that I wasn’t proud of, and now seemed the right time to catalogue those disappointments. It was disconcerting to watch my emotions deteriorate and feel helpless to stop them. I know full well that dramatic mood swings are pretty much a given in ultra-racing. Still, I had been hoping I would avoid them, at least until Missouri or Kentucky.

I put my foot down in the parking lot of a 24-hour gas station in Eureka and laid my head on my handlebars. Pulling two giant pieces of pizza out of the greasy, rotating glass carousel inside felt like a luxury compared to the mental darkness I had just experienced. You have no idea what I have been through, I wanted to tell the night clerk.

As I walked out of the door, here rolled Michael Wacker into the parking lot. He was smiling and seemed to have taken a different mental route from Newton than I had. Maybe he ate more fried chicken. Michael was going to the park to sleep, and I went to a run-down motel and rummaged around under a potted plant trying to find a key the night manager had left for me. Eventually I found it under a heavy, dirty mat.