I rolled off the couch around 4am and tried to pack my sleeping bag up quietly. The other cyclists were sleeping in the next room, and it was hard to contain my envy for their leisurely sleep schedule. I closed the door behind me and immediately heard thunder.

The road from Ash Grove to Walnut Grove to Fair Grove (so many groves!) was more rolling hills and light traffic – fortunately, as there wasn’t yet any light in the sky. The thunder, however, was grumbling increasingly frequently and the wind was whipping from one direction to another. Just past Walnut Grove, the skies opened up and the rain started pouring in buckets. I pulled under the eaves in front of a still-closed convenience store to check the radar. The woman inside was prepping to open, and she generously opened the door and ushered me in. She already had the coffee going in the pot and told me to grab a cup.

I checked the radar while I sipped hot coffee, which appeared to indicate that the rain had settled across Missouri and was not interested in exiting quickly. I sent a message to Jon Lester, who was about 100 miles ahead of me, and got this reply. 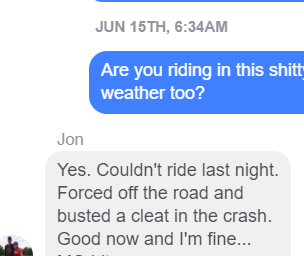 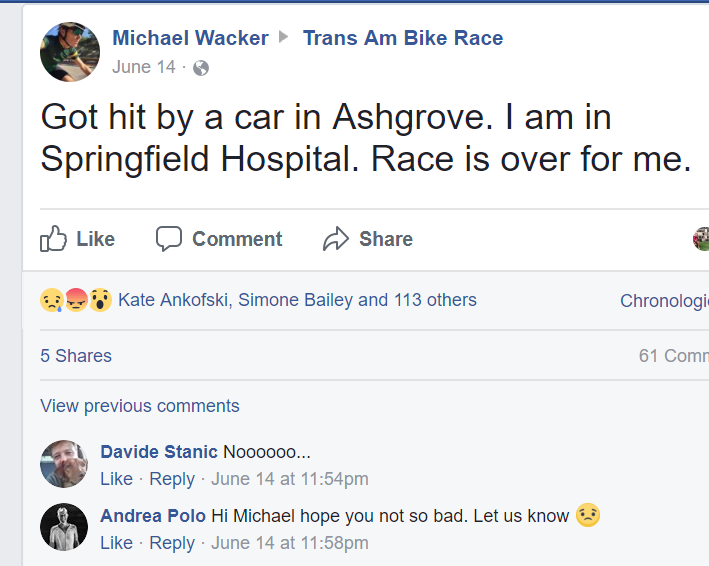 One of the amazing things about ultra-racing is the complex nature of the competition on the road. I’m sure that others feel variously about their competitors, but to me the difficulty and demanding nature of this racing style breeds a camaraderie between racers that generally supersedes rivalry. No matter your background, experience, relative strength or speed, everyone is in the thing together. The thing is grueling, and confusing, and very susceptible to the whims of luck. And that shared experience creates a bond, whether spoken or not, that is hard to replicate and impossible to deny.

So when I saw this message, my first instinct was that I needed to get to the hospital. I didn’t really know Michael well, in the real-life way, but in another very important way he felt like a brother. I was only about 30 miles north of Springfield, so I started working out ways to get there. I could ride, though faster might be to stash my bike somewhere and get an Uber. I didn’t know the extent of Michael’s injuries, and I kept thinking about him being in a foreign country, experiencing this nightmare scenario all over again that had happened two years earlier. It was before 6am, and I tried calling him, but no answer. I didn’t know whether that was a good or bad sign.

I kept on riding, and eventually made it to Marshfield, where the rain had let up and the McDonalds was willing to sell me five Egg McMuffins, three of which I greedily ate in the vestibule. Michael’s girlfriend had by then posted that Michael was going to be okay, without broken bones or any major damage. I was relieved to hear it, but also shaken in the way that you are when you are reminded that, like everyone else, you are flirting with danger each time you get on your bike. That said, we all evaluate risk in our own way, and my choice had been made long ago.

I had worried about today’s route through the Ozarks for a while, now, but some good sleep meant that my mood was positive, and the approach to the hills of the Ozarks Parkway was masked enough to keep me in denial for most of the morning. Also, there were some helpful distractions. Along the way, a touring cyclist waved me over to the other side of the road. His name was Eric and he told me that he and his friends had been following the race. His female friend behind me, Taylor, was so intrigued that she was considering doing the race herself. When I saw Taylor, I stopped to chat with her too. Beaten and battered as I was by then, I probably wasn’t the best billboard for the joys of the race, but I tried to fake it anyway.

A few miles later, I crossed paths with Doug Haluza, who was racing the Trans Am Bike Race from east to west. Doug had ridden west to east the year before, but I hadn’t gotten a chance to meet him then. We didn’t chat long, but he said he had seen Jon, and reaffirmed my memory that the hardest riding was still to come. 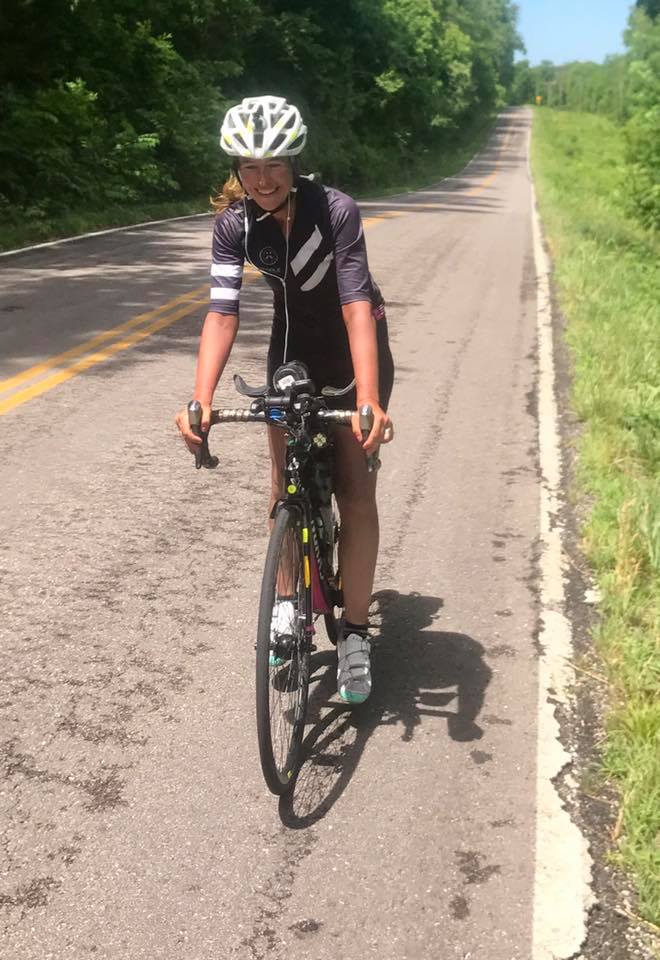 It was mid-day by this time, and hot. I was getting really sleepy, and caffeine was no longer working. I decided to take my first daytime nap of the race, and found a small shaded spot just off the road. Despite the traffic thundering by less than 20 feet from my head, I fell asleep immediately after lying down. I kept my helmet on, to remind myself this wasn’t a break – just a nap – and jumped up when my alarm went off 20 minutes later. 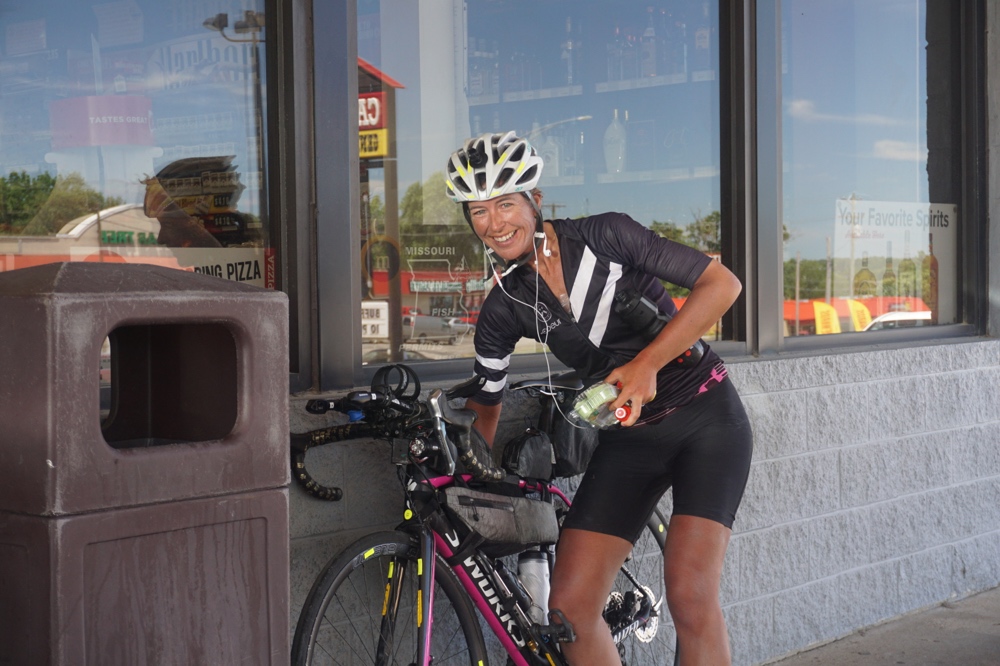 There’s a sense that I got both times doing the Trans Am at the doorway to the Missouri Ozarks that I was truly entering the deep heart of rural America. The pickup trucks were getting louder, and gun sightings more frequent. At the same time, the scenery was becoming more beautiful – lush, green, and more untamed. To me, there is a weird spookiness to this area, so isolated and wild. After the 2016 race, Jimmy said that every “National Scenic Riverways” sign on the course began to strike fear into his heart, because it meant a road that would plunge down to a river, then buck immediately back up over a mountain. 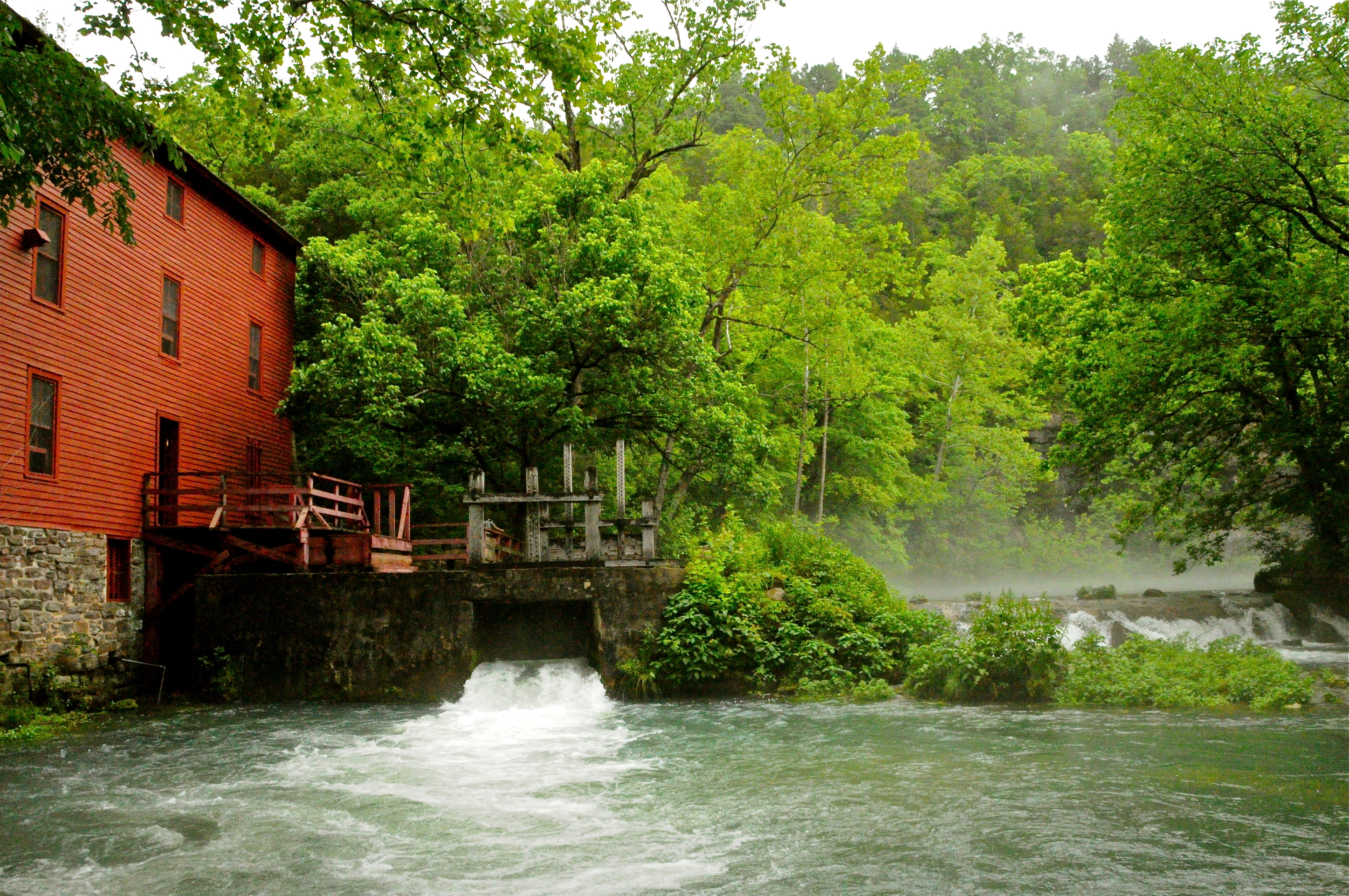 Green wildness of the Ozarks near Alley Mill, MO. Source

Highway 106 from Alley Spring to Ellington is only about 30 miles – but includes some of the most steep, hot, relentless up-and-down riding of the entire route. This is a stretch of road that would be a blast to ride with fresh legs on an unloaded bike. But after nearly 3,000 miles in just over 12 days, on a bike laden with water and bike bags, it could reduce you to tears and walking. This happened to me in 2016; this year, I was determined that I would fall off my bike before voluntarily getting off.

It was getting late in the evening, but it was still light, so I set my sights on Ellington – where I hoped I could sleep – before dark. I took each climb as it came, not thinking about the one before or after. I stood and cranked as I needed to, gasping for breath on the descents to try to recover before the next 15 percent grade.

I rolled into Ellington exhausted. I was nearly 75% of the way across the country, and I had mixed feelings about my riding thus far. I had tackled the worst of the Ozark hills with strength and focus, and I was now in third place in the race. But I was worried about my overall plan. I was falling further behind my spreadsheet for my sub-20-day finish. Today my goal had been to make it to Farmington, and I was now 60 miles behind. I had mentioned my concerns to Greg the day before. When I reached Ellington, I saw this message. 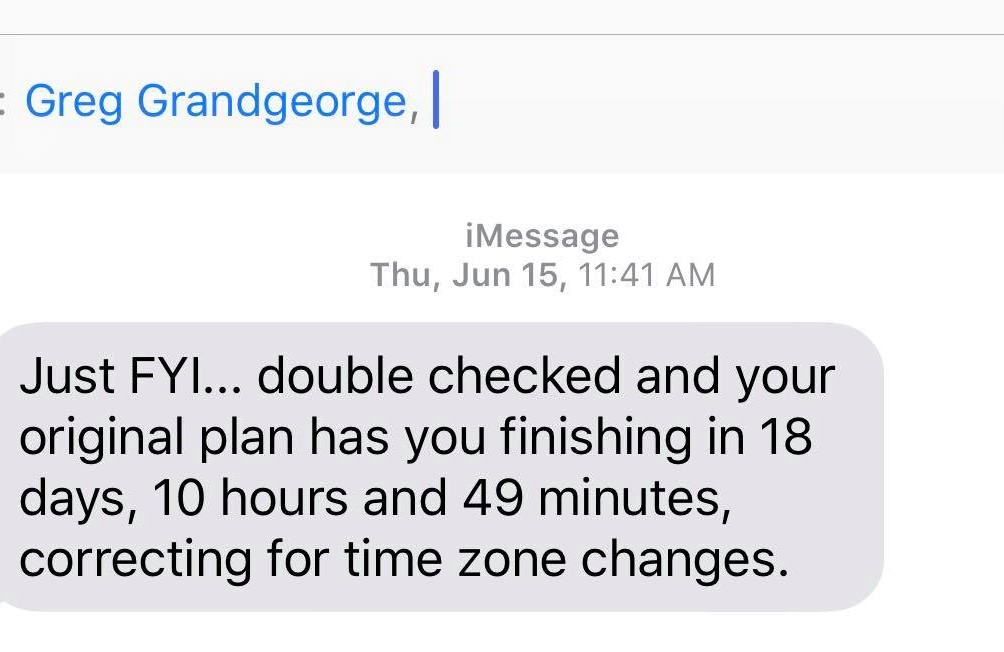 It took a minute for the import of this message to sink in. What this meant was that, for the last 12 days, I had been religiously following a plan that had me finishing a full day faster than I thought. While it was certainly mathematical incompetence and bad planning that allowed this to happen (basically, on my spreadsheet I had counted the first day as 1, instead of 0), I couldn’t help but laugh out loud. Here was a pretty good example of how I could trick my brain – even inadvertently — into doing something I didn’t know I could do. I had made it this far on a lie, I figured; I might as well keep going for it.