I had weird dreams sleeping in the ditch. I dreamt that I was a dot, and anyone could see me at any time. (Wait, not a dream.) Someone was trying to catch me by finding out where I was sleeping.

I woke up to a motor idling just above my head at the intersection of the two streets. I was just below in the ditch, under the underbrush. I looked at my phone. It was about 4am. This was real life, not a dream.

I waited for the car to drive away, but it just sat there. Weird. Then I heard the engine get turned off, the door open, and footsteps crunch on dirt, walking around the car. I laid totally still. I didn’t see a light, or hear anything else. The footsteps stopped just above my head. Was I dreaming still, or was this really happening? I could hear my heart beating in my chest. This was real life.

I needed to pack up and be ready to sprint away on my bike, if I had to. The only packing I needed to do was my bivvy bag, but when I started to fold it up it began to crinkle loudly. I froze again. The footsteps started again, and the person got back into the car. The engine went on, and the car slowly drove away.

I was terrified, but tried to calm myself down. It was probably nothing, I thought. I was just having a bad dream and woke up at the wrong time. Nevertheless, my adrenaline was pumping as I shoved everything quickly back into my bag. I just wanted to get on the road again, where I felt safe.

I hauled my heavy bike up onto the road. My hands were shaking. As soon as I tried to get on my bike, I crashed over on the right side, pinning myself under my bike. Crap. Crash number one of Trans Am 2017.

I was unhurt, except for some minor road rash, but I had managed to bend my derailleur ever so slightly, which took my easiest gear out of commission. I was none too happy about this, because I knew the steepest hills were still to come.

I pedaled slowly into Bardstown, about 30 miles away. It was drizzling rain when I rode into town, quiet on a Sunday, the big whiskey storage buildings like grain elevators rising on the side of the road. You can smell Bardstown whiskey from the outskirts, and I tried to decide if this would be a good or a bad time to have my first drink of the race. I pulled into McDonald’s, where I planned a full-on reset for the day, fueled by coffee and about 12 Egg McMuffins with bacon.

I sat down at a table and took a sip of burning hot coffee. I plugged my phone into the electrical outlet to charge while I ate, and checked Facebook. I saw this message right away. 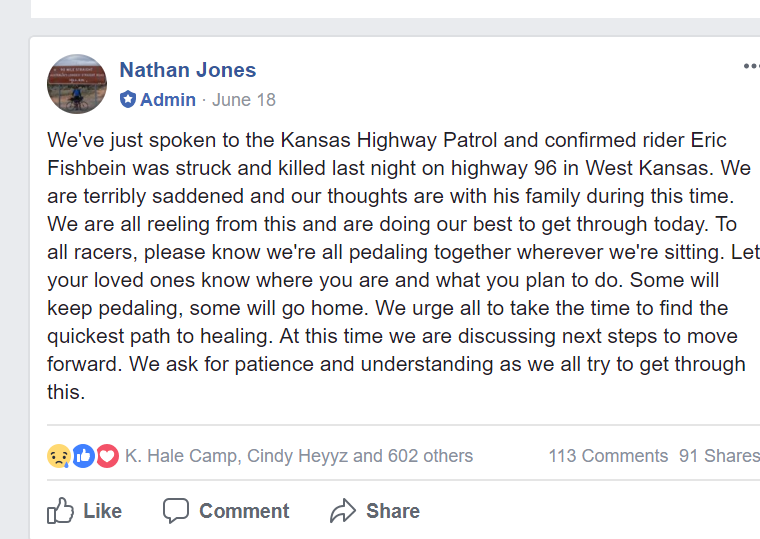 I felt like I was going to pass out. My mind immediately began thumbing a mental file of all the racers that I knew. Were any of them in Kansas? I didn’t think so, but I wasn’t sure. I sat in the McDonald’s in stunned silence, trying to think about what to do. I don’t know why, but I felt compelled to do something. But there was nothing to do.

I thought about quitting – to the point where it seemed like the right thing for me to do. If I thought about it one way, I really had no business being out here doing something so dangerous, in the name of fun. It was irresponsible to Jimmy, to my parents, to the other people who cared about me. Why put them through that?

Plus, the sense of fear can take the joy from riding. After Mike Hall’s death in the Indian Pacific Wheel Race in late March, I had ridden scared for several weeks following. Even though the rational part of my brain knew the facts – far too many cyclists do get killed by motorists, and Mike being an unlucky victim did not suddenly make cycling any more or less dangerous – I felt like every ride was tempting fate. That sensation, in and of itself, heightened the specter of danger and reduced th fun. It felt too close.

This accident felt even closer. Suddenly I didn’t want to ride at all. I started thinking about transportation options: I could maybe take a bus to a city, then fly home. I didn’t even really know where I was on a map, but I could figure out how to make it happen.

I called Jimmy. I told him the news and he was horrified. We sat there in silence for a minute. I said, “What do you think I should do? Should I come home?” He said, “I think you should hang up the phone, get on your bike, and keep riding. It’s the only thing you can do.”

He was right. I got on my bike and pedaled the hard hills to Harrodsburg. Periodically, I would be overcome by a flood of emotion and get off the bike, sit down on the side of the road, and just cry. At some point, I told myself, “You’re not helping anyone by stopping to cry, you’re just hurting yourself.” I think it was Lael that once had the good advice: If you’re going to cry, cry on your bike. I stayed on my bike through the rest of the tears.

I called Evan and broke the news to him. He was devastated too. It helped a bit to talk to another racer, just to hear someone echo all the thoughts in my head. He was close to the finish. Before we hung up he told me he had been bitten by a dog near Pippa Passes in Kentucky, which I would reach the next day. He said it was a vicious dog that had come from nowhere, and that he was glad he had gotten a rabies shot in Colombia a few months prior, so he didn’t have to worry.

In Harrodsburg, I stopped in the same convenience store I had stopped in the year before. I was sitting at a table with a plastic tablecloth when a dot watcher from Harrodsburg came in. “I’m so glad I caught you,” he said. He told me he had two young girls and they had been watching me. He said they hadn’t been able to come see me because of an event that they needed to be at, but they had made posterboard signs for me. He said they watched my dot every night as a family because “I want them to see what they can do someday too.”

That conversation just about broke me again, but gave me a renewed reason to ride. If I couldn’t find a reason for myself to keep going, I could at least do it not to disappoint the daughters of a stranger I was talking to in a gas station parking lot in Kentucky.

I rolled towards Berea that afternoon, the clouds in the distance getting more and more ominous. In my mind, the college town of Berea, south of Lexington, marks the boundary between the gentle, whiskey-scented hills of Western Kentucky and the lonely, hard, eerie mountains of Eastern Kentucky. From my memory of the year before, they might as well be two separate states, if not countries.

About 5 miles before I reached Berea, the sky opened up and rain began to pour out. It had been such a crying day that it almost felt right, like the sky was grieving too. It rained so hard that inches of water began to pool on the ground within minutes. It was a dangerous game to be in the road but there was nowhere to stop, so I just put my head down and mashed the pedals as hard as I could until I made it to the town square where I could stop under the shelter of the portico in front of the Boone Tavern Hotel.

I wanted to sleep so badly. I’m not sure whether I was that tired, or if I just wanted the sadness and the fear to go away. It was only about 6pm, and every hotel I called had a room, for $150 or more. The rain was still coming down in sheets, the hardest rain I’d seen so far, and I just stood outside this fancy hotel watching dry people with umbrellas come out and go into the warm, carpeted lobby.

Then as suddenly as it came, the rain stopped. The sky hinted light. I knew if I didn’t act fast, I could get stuck in a vortex of indecision, so I just got on my bike and started pedaling. In the town of Big Hill, at the bottom of its namesake climb, I stopped to figure out my plan for the night. 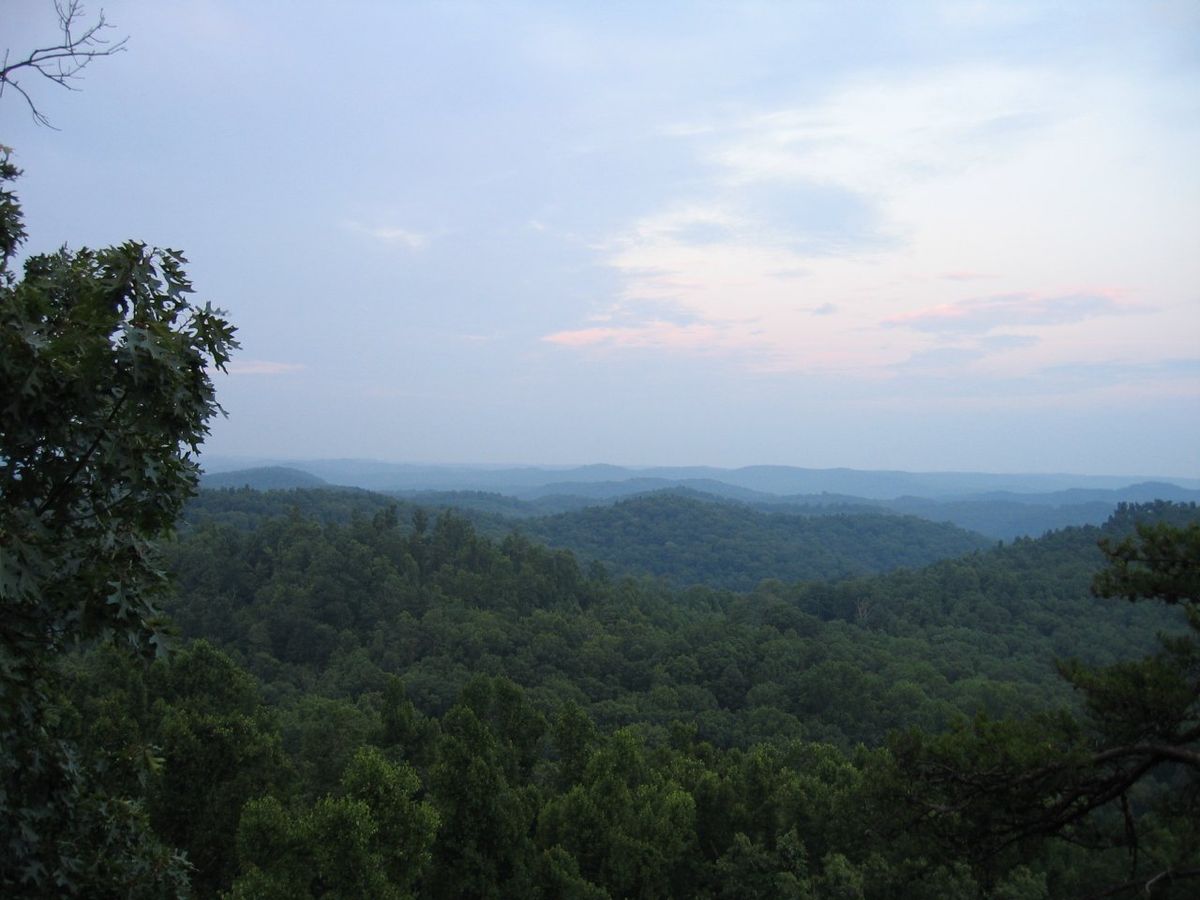 There was no town of any size for over 50 miles from Big Hill, but I did find on a message board the number of a woman who rented a room in her house in Booneville. Booneville, Kentucky, that sounded promising. I called her once, and no one answered, and for some reason I called back again and she answered. She had a sweet voice and said yes, she could rent me the room for $30. I told her I’d be there about 10pm, and she asked why are you arriving so late, honey. She gave me very long and detailed directions to her house, none of which I was able to take down. I asked her if she would text me and she said she had a land line, so I just hoped I would remember something of what she said.

I now knew that the rider who was killed was Eric Fishbein, who I had ridden with briefly early on day one. Among many other troubling emotions, the news had really spooked me about riding at night, and I wondered whether I should commit to stopping that behavior entirely. On the other hand, race director Nathan had communicated that the race would continue, which meant that I was also no less in a race than I had been the day before. I was in third place in the Trans Am Bike Race, I had worked hard for that, and I didn’t want to give it up. I told myself to just ride fast and hopefully I would make it to Booneville with light to spare. 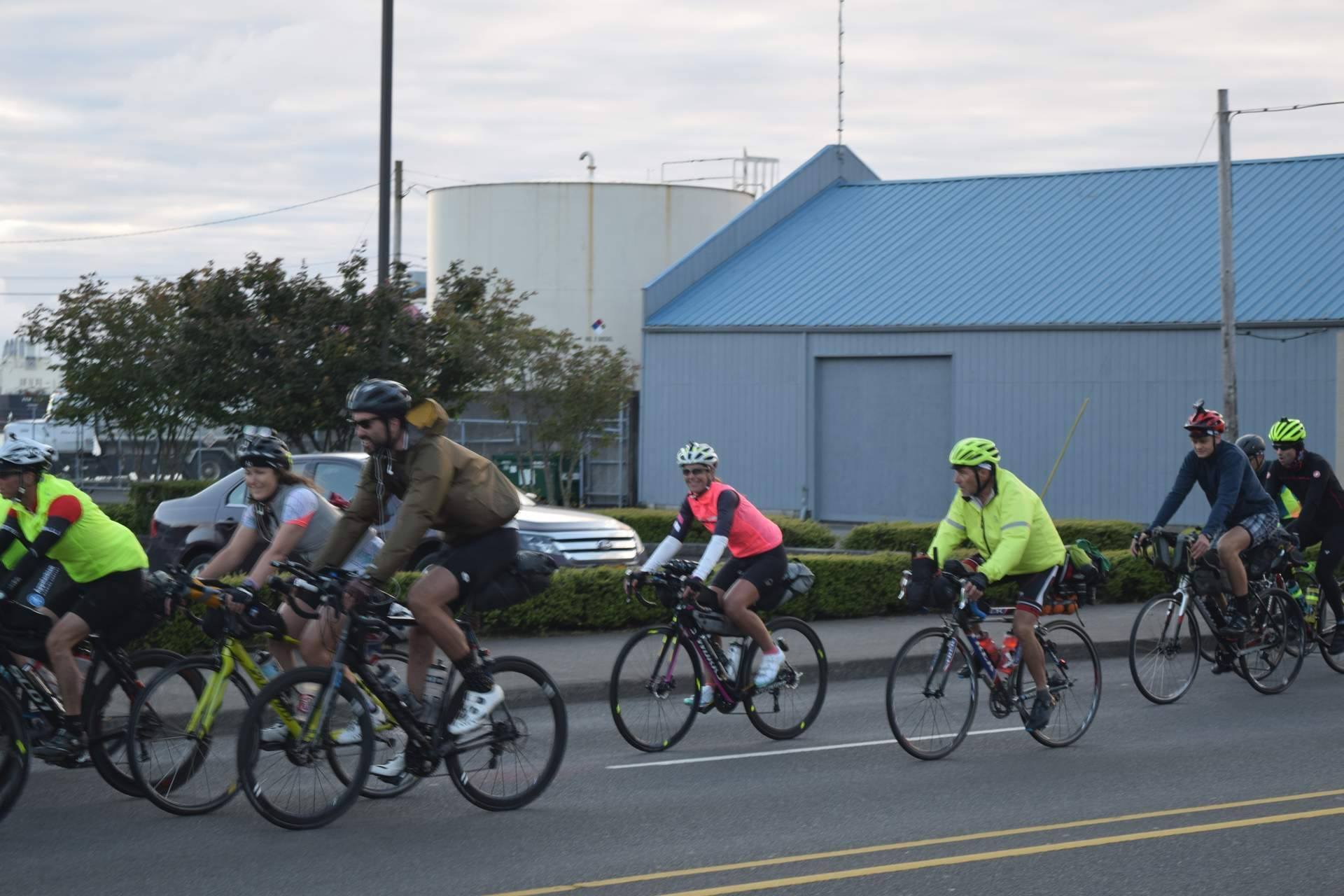 Riding side by side with Eric on Day 1

I did ride fast; nevertheless, it was pitch black by the time I got to Booneville. I remembered the first part of my host’s directions: “Go right off the main road down a hill, and you’ll see a blue car parked in front of a white house. That’s my ex-boyfriend’s house; he’s a cop.” I found the cop’s house and then I was supposed to see a flashing light, but not go all the way to it, and then turn left up a long, dirt driveway. I turned up the first dirt driveway I saw, and was immediately chased down by snarling dogs. I roamed up and down the dark road – the only light I could see the flashing one in the distance – but didn’t see any other driveways. Finally, I gave up and called the woman back. She sighed and said she would walk down to the road.

Five minutes later, I heard someone calling about 50 meters down the road. I rode towards a figure whose silhouette I could barely make out, backlit by the distant flashing light. As I got closer I realized it was a petite woman with white hair in a nightgown. She was holding a giant shotgun.