My alarm woke me up at 2am on the outside balcony of the Breaks Hotel, but I couldn’t make myself get up and on the road until 2:30. I remained conflicted about riding at night, especially since Eric’s death, but I told myself that if it was a risk I was going to take, I just had to suck it up and take ownership for that decision. There was the occasional truck on the road that wound through the hills of the far western part of Virginia, but for the most part the roads were quiet that early in the morning. 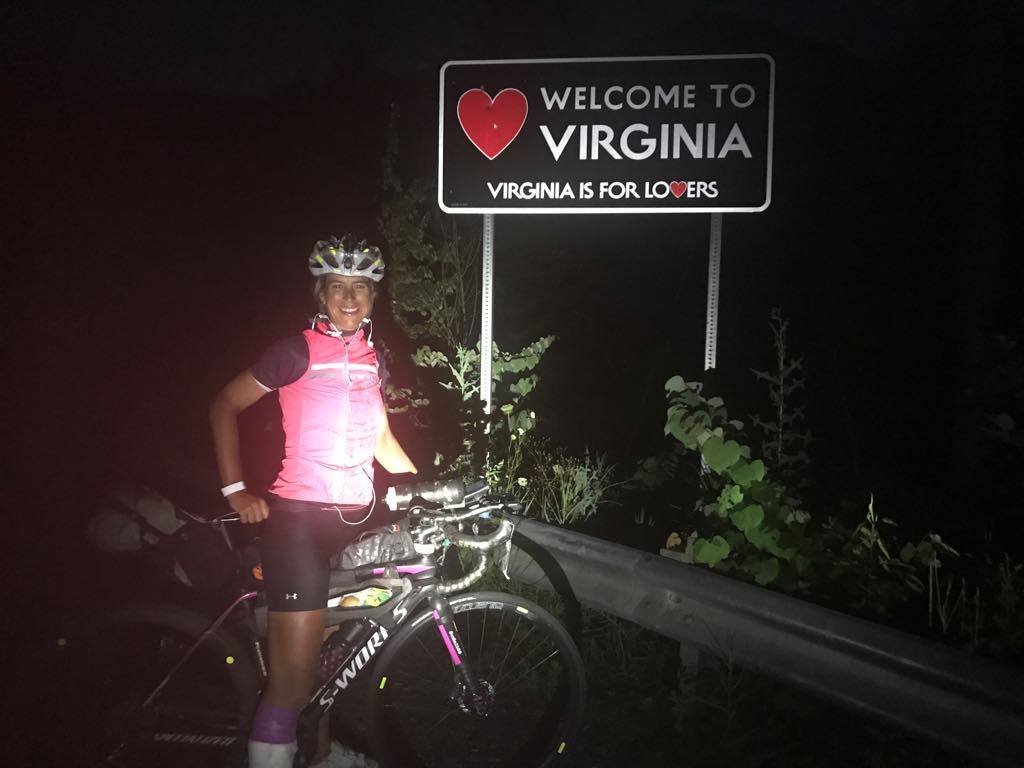 One state to go, hospital bracelet glowing in the light.

I stopped for breakfast at a convenience store, I think in Honaker, and took two 5-hour-energy shots in quick succession. I did the climb out as the sun was rising. My brain was buzzing and I was singing out loud. People were driving to their places of work, wherever their commutes were to, and I was waving at them from the shoulder on the side of the road. Caffeine no longer worked for very long, but with steadily increasing doses, it still worked. And I had begun to crave those short bursts of energy. 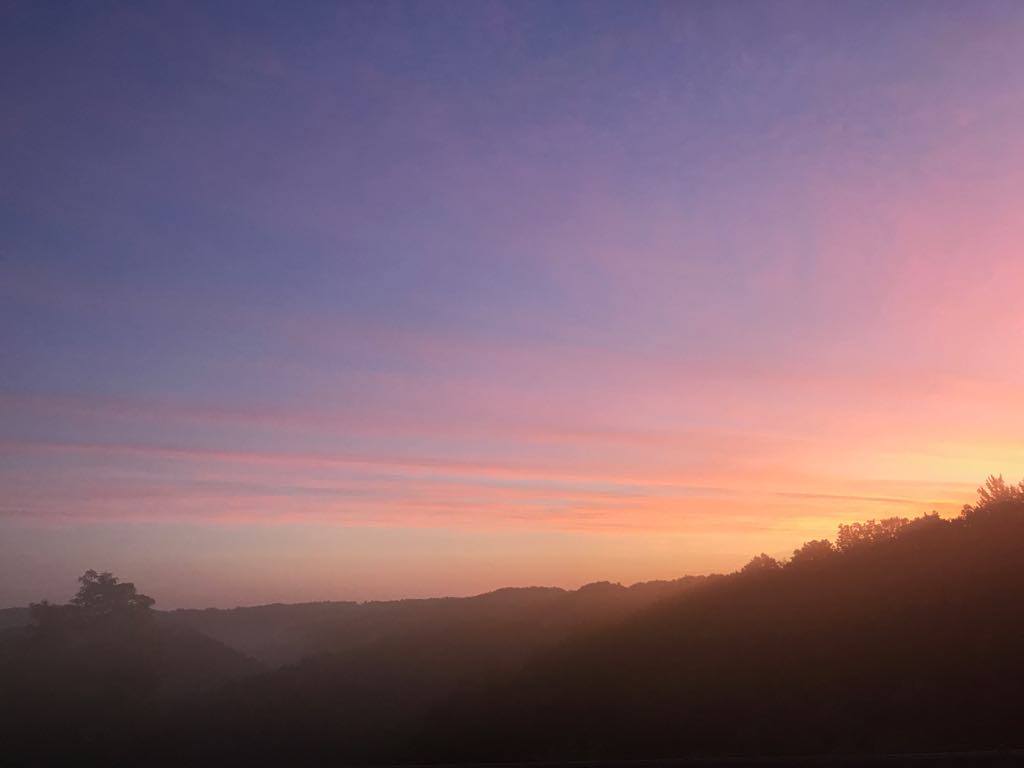 I don’t know whether other racers had this experience, but one odd thing that this race did to me was completely skew my concept of time and distance. In the first few days of the race, I was completely focused on those metrics, but as time passed and I got more tired, those concepts became more and more fuzzy. Of course I knew I was in Virginia and somewhere “close” to the end, but “close” seemed like such a relative concept. On the map, there was very little distance left to cover. But in any given moment, considering what had still to be done – physically and mentally – to reach Yorktown seemed unfathomable. My spreadsheet plan, which had somehow ordered my sense of time and space, was of no real use to me anymore – except as a depressant. As of the previous night, I was 120 miles behind my plan.

Fred found me after sun-up and rode with me again into Damascus, a beautiful mountain town near the Tennessee border that is a resupply point for Appalachian Trail hikers. There I ate breakfast sandwich biscuits from the convenience-store-with-grill and talked to a motorcyclist who was riding across the country. He was impressed by me, and I wanted nothing more than to be him. 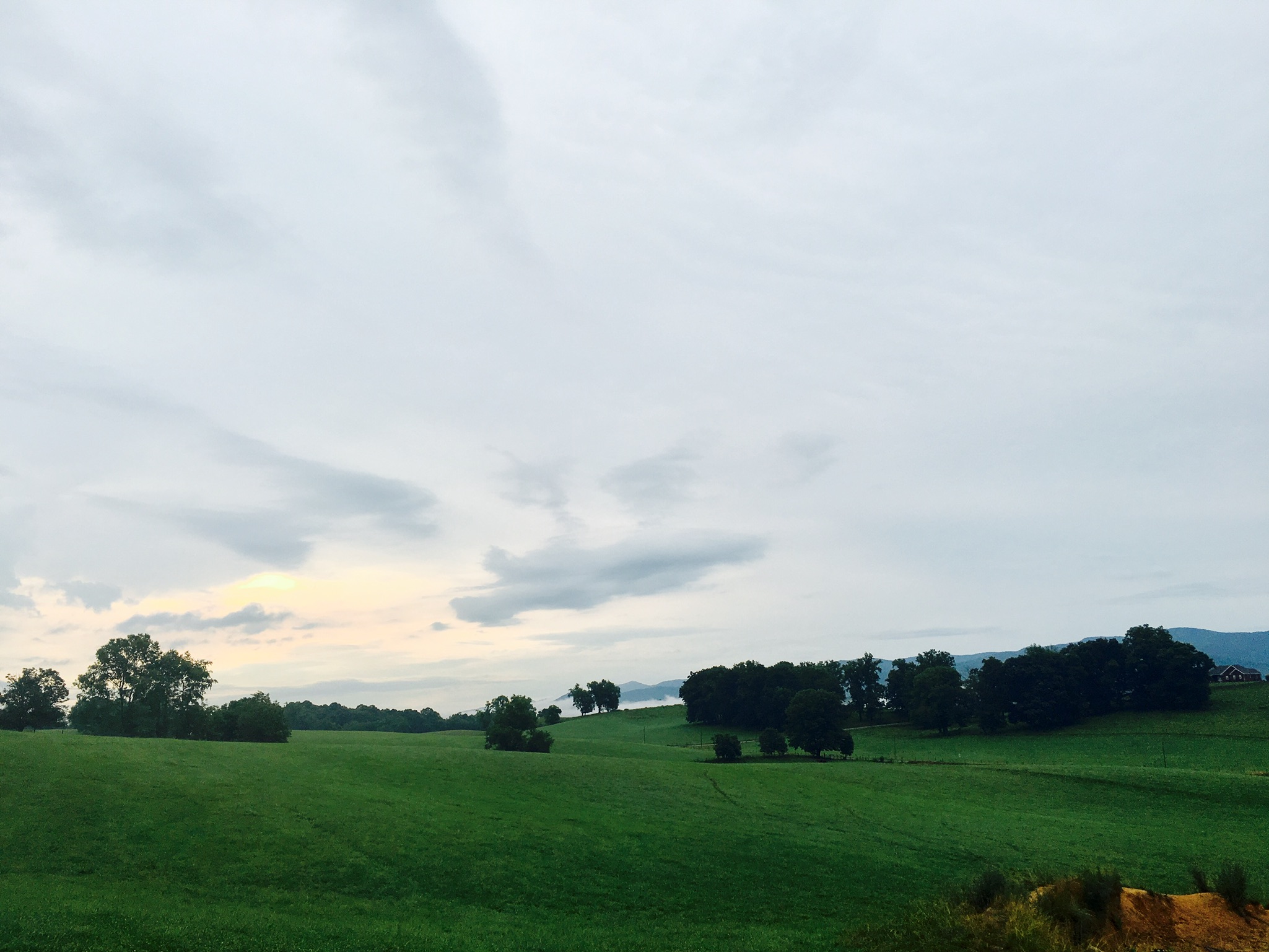 Last year I had also arrived in Damascus in the morning after riding all night – though it was three days later – and slept at Crazy Larry’s Hostel for a few hours. This year I didn’t want to give myself that luxury, so I got on the road quickly and headed out of town up the long, steady climb along the river. Vans and trucks loaded with bikes rolled by; it seemed they were shuttling clients up to a high point where they would ride the Virginia Creeper Trail back down to Damascus. As the road kept climbing and climbing, I couldn’t help but thinking that they were the ones doing it right.

There’s a big descent down into Troutdale. I remembered the convenience store there well, because the previous year the two women there had been terrified for my safety, and then I had seen Nathan and Anthony shortly after leaving. This year I was hot, and I threw away my bike shorts in the trash can in the parking lot while I ate ice cream. I’m not sure why I thought those extra ounces were causing me a problem, but it made me feel a little more free to see them disappear into the trash.

The next 70 miles of the route wind their way through rural southern Virginia in a weird combination of meandering back roads through charming rural towns and stretches of feeder road alongside the busy Highway 81, which is a major north-south thoroughfare across the state. At one point you are paralleling the highway on the left, then have to jog to the right over a bridge across it. I missed the turn and rode some steep hills until the road dead-ended unceremoniously. I put my head on my handlebars and just waited the emotion out, a few tears in my eye but too tired to actually cry, before turning around.

It was late afternoon when I rolled through Newbern, a quaint old town of clapboard and farm houses. As I was riding, a car pulled up and someone called my name. I looked over and there was Katrina! I had met Katrina and her boyfriend Jim several years before during a Blue Ridge Parkway bike tour that Jimmy and I had done with several other friends. They live in Radford, a few miles from Newbern, are great supporters of the local cycling community, and had become avid Trans Am dot watchers the previous year. I had expected to see them at some point but wasn’t sure why Katrina was here and not in Radford. 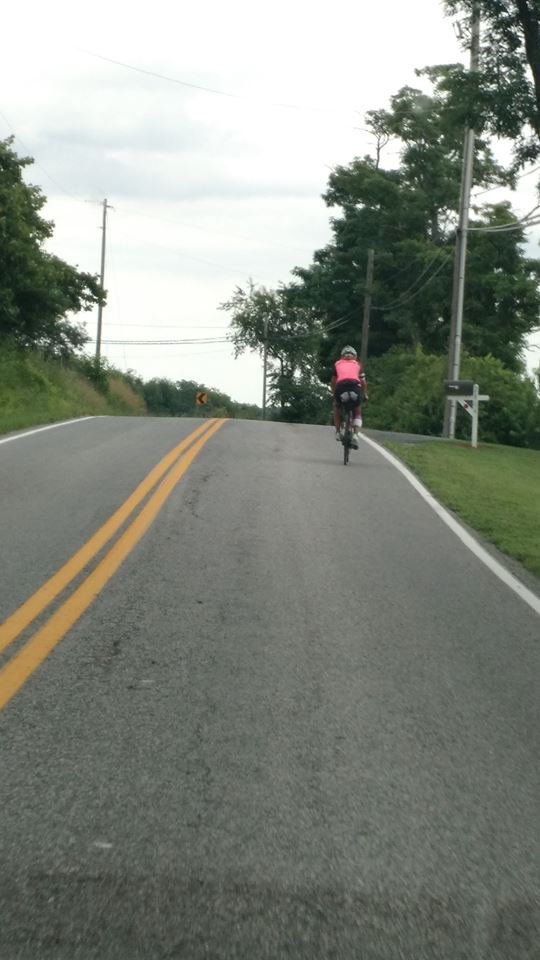 As I crested a small hill I saw Katrina again, standing in front of a church. On the marquee outside of the church, there was a sign that brought tears to my eyes (again). I’m not sure how this happened, but it was an incredible boost in a very difficult day.

As I rolled through Radford I found more messages of support. These small gestures took me out of my own loneliness and made me feel connected again to the world. 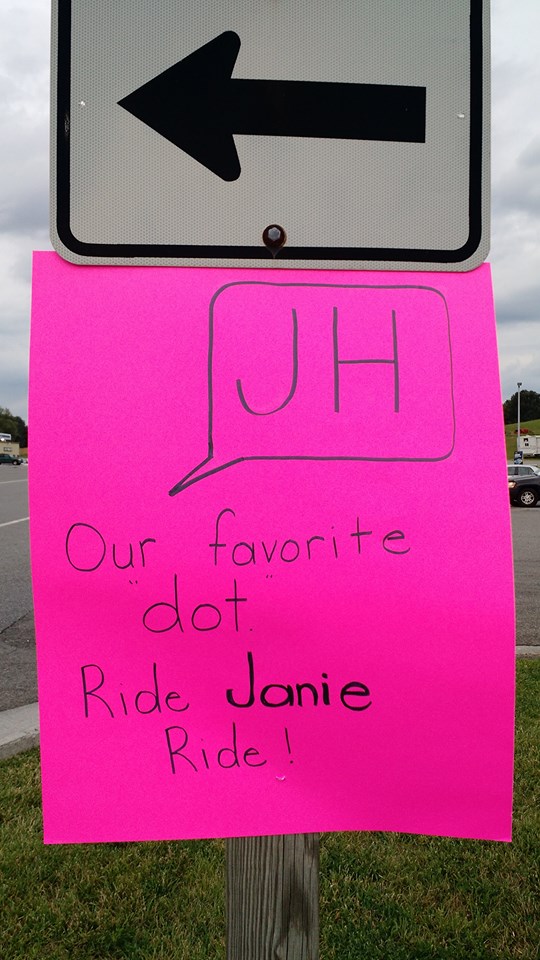 Jim and Katrina were there to greet me again, just as I made the last climb out of Radford. 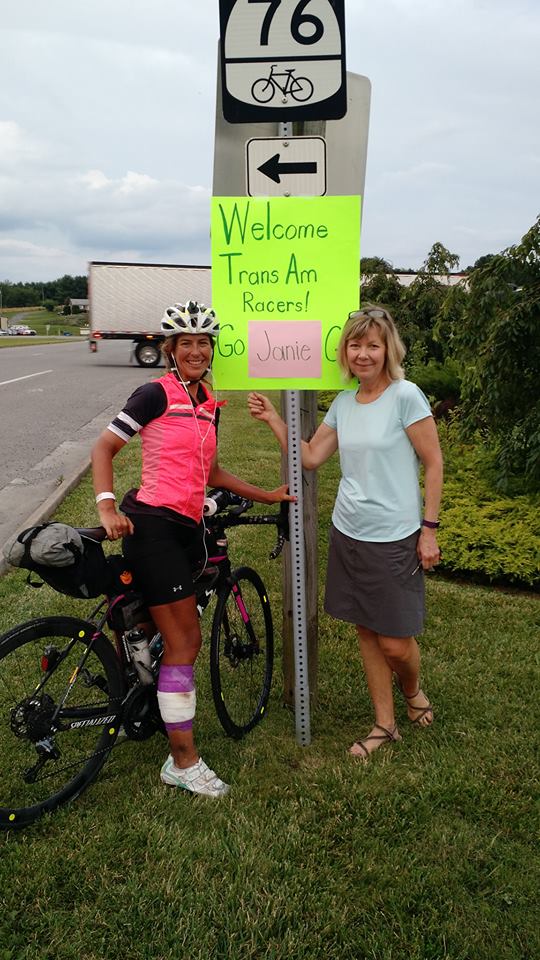 Like last year, I rolled about ten miles past Radford to Christiansburg to sleep in a cheap motel there. I thought about going further, but I remembered that past Christiansburg are the deceptively tough Catawba mountains. Plus, Evan was finishing his Trans Am race that night, smashing the previous record. Surely, that called for a celebration. In the convenience store, I bought a stale chicken sandwich (it was on sale??), which ended up being inedible, and a beer. Looking in the mirror at the hotel (a practice I generally avoided), I discovered I had contracted a massive rash all across my torso and back – perhaps a side effect from the rabies vaccine. Well, at least it wasn’t rabies. 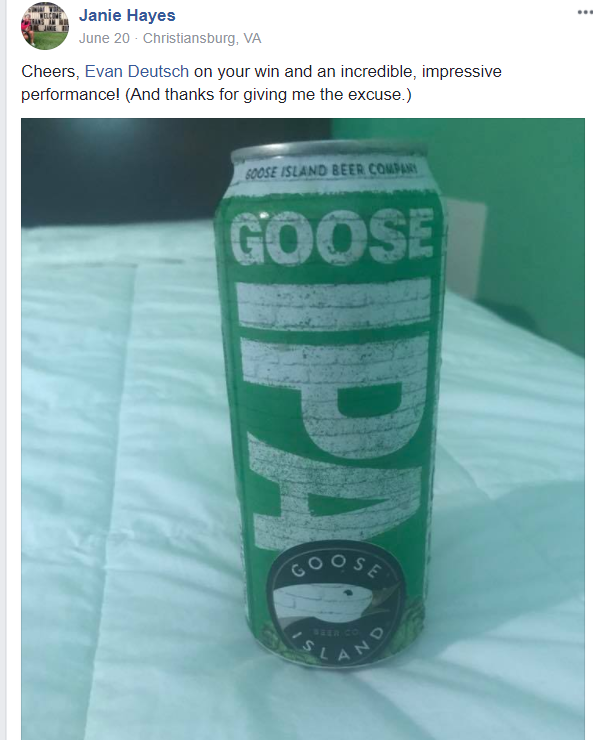 I drank the beer in the hotel room and let myself the luxury of reading Facebook posts for ten minutes. There were a lot of photos and videos of Evan – including the whole of Jon Lester’s family cheering Evan’s finish, after a long race between the two for the top two places in the race. Seeing this made me smile (or maybe it was the taste of beer). I tried not to let myself think about what it would feel like to be there myself. It still seemed like a long way to go.