I got out of the Christiansburg motel around 4am. There were still just under 400 miles left to ride. Virginia is a pretty long state and there were a couple of mountain ranges to get up and over before heading down to the flat coastal communities east of Richmond and then to the nondescript, yet absolutely monumental, Yorktown itself.

In 2016, I had also left Christiansburg early in the morning, and ridden those last 400 miles pretty much straight, with just a couple of quick naps in unsuitable locations on the side of the road. By the last 100 miles, I was absolutely toast, in tears, and hardly able to move the pedals. 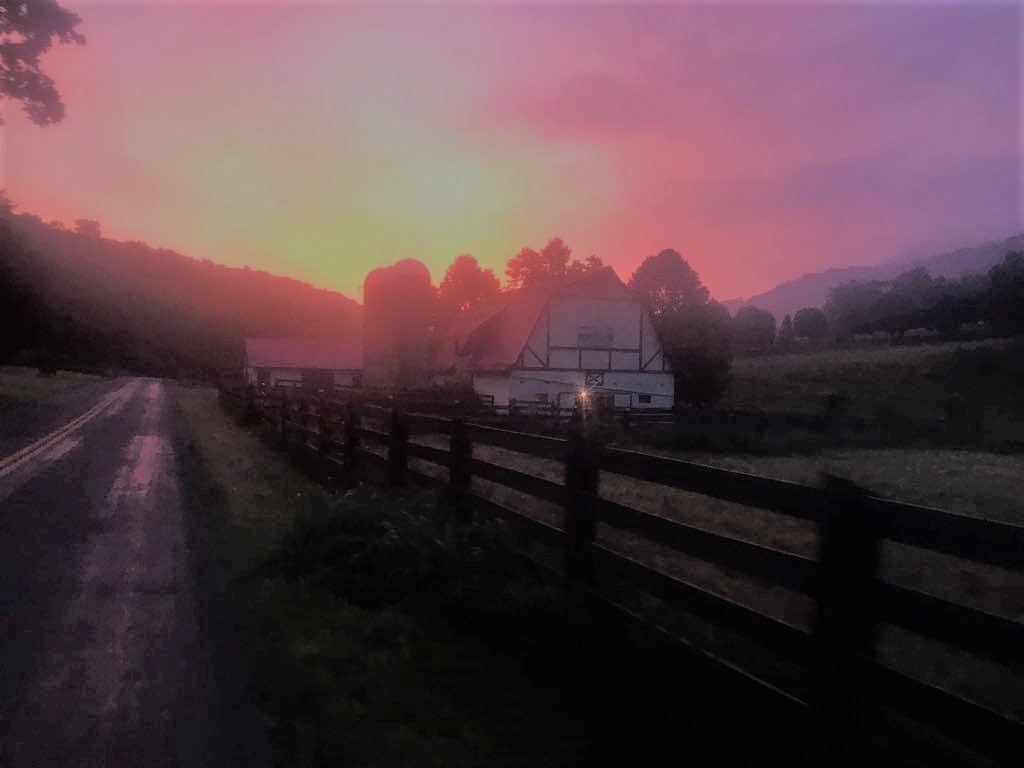 Sunrise in the Catawba Valley

This year I wanted to finish differently. I don’t know why, but I felt that finishing this race mentally and emotionally strong (physically was not really an option) was critical for me to feel that my race had been successful. A lifetime of experiences had happened in the previous 19 days, so many of which felt completely out of my control. I wanted to be able to write the last chapter of the book.

Up until that morning, I had kept my brain on a pretty tight leash, not allowing it to contemplate the finish. But in the early morning dark entering the up and downs of the Catawba Valley, it seemed like now was the time to make a finishing plan. Math was hard to do at that point, but I was pretty sure that the dog bite fiasco had sabotaged any hope of a finish under 19 days. That was a bit disappointing, but time and space was so arbitrary by that point that I didn’t dwell too much.

The sun rose over the beautiful farmhouses and green valleys of the Catawba hills. In Troutville I stopped at the same little grocery store I had last year, and just like last year, Jimmy’s brother Mark pulled up in his truck to give me a hug and say hello. He said I was too skinny and I said I was eating all the food and promised to get fat once the thing was over.

A few miles down the road, I found my sister in law Lois and two nieces, Adaline and Ella, in their car on the road coming the other way. They pulled over and we did a quick round of hugs. The girls were not in the mood for photos, and there was a funny couple of minutes of Lois fruitlessly trying to coax everyone into looking like they were. At some point I think we all realized that maybe it wasn’t really an Olan-Mills-kind-of-day. I gave high fives and carried on towards Lexington. 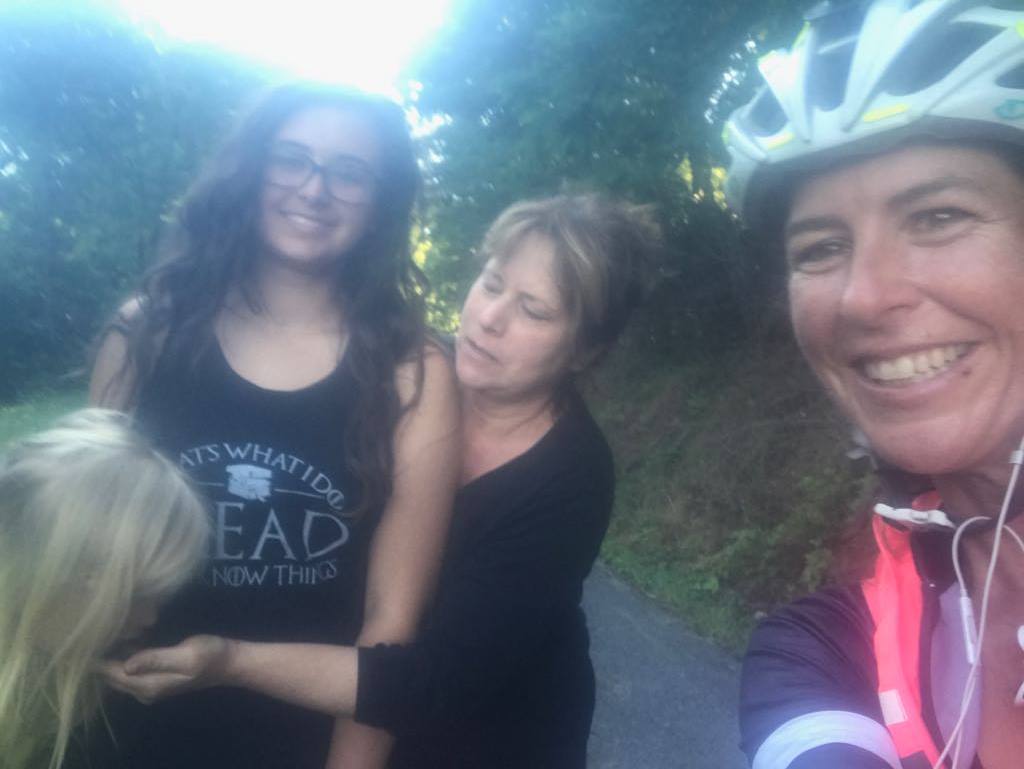 It was mid-day summer hot when I got to Lexington. I was about 100 miles into the day, and tired, and needed badly to refuel water and food. The Trans Am route through Lexington brings you through some suburban outskirts, then suddenly you’re in the middle of the tourist downtown (which feels far too busy and confusing for a cyclist 3,900 miles deep), and then you’re on a busy highway looking for the turnoff. When it comes, you take a right and – boom – you’re popped out of other side of town. No more shops, no stores, no gas stations.

So I suddenly found myself on the other side of Lexington without food or drinks. The temperature was around 100, and it was not the time to be making that type of mistake. Perpetual forward motion, though, was the greatest priority, so I just kept riding – hoping that something would appear to save me.

It did. At a left-hand turn towards the fabled Vesuvius climb, which takes riders onto the Blue Ridge Parkway, there was an old crowded convenience store with a deli inside. I had to make two trips up to the counter to carry all of my drinks and food, and the guy at the cash register raised his eyebrows – looking at the pile of food, then looking up at me – but didn’t say anything. I sat outside at a picnic table with two guys who were taking a shaded lunch break from all day at a construction site in the sun. They asked me a million questions about the ride and were stoked when I gave them half a package of Nutter Butters before I left.

There are a few nice, flat warmup miles before the route’s final set of mountain climbs. I enjoyed this section along the river, though I knew what lay ahead. Just before the base to the climb, David Elliott pulled up beside me. Part of the area’s avid dot watching crew, David and a couple of other friends were watching dots and checking on riders. He accompanied me to Gertie’s Country Store, where I got ice in plastic bags and put them down my jersey.

Vesuvius is only about 3-4 miles long, but its relentless grade at 10-12%, and placement at 4,000 miles into the race, gives it a legendary status. I have ridden this climb on fresh legs and truthfully, it is harder then – when you have something to give, and can push yourself to exhaustion. During the Trans Am, there was little I could do but just grind up slowly, and wait for the top to come. Just before the summit and the entrance to the Blue Ridge Parkway, my di2 electronic gearing died, and so I plugged the charger into the connection for my front Dynamo hub.

The Blue Ridge parkway undulates up and down for about 40 miles from this point. The views are spectacular, and this part of the route brought back a lot of good memories of riding with friends when Jimmy and I lived in Washington DC. It also brought extreme technical frustrations. My front hub can only produce electrical energy when I am going fast enough, and my speeds on the uphills were rarely fast enough to create that kind of power. I was bombing the downhills, but they didn’t last long, so the charge generated would be used by the time I crested the next climb. Still, I was able to keep barely enough charge to shift gears when I really needed to. 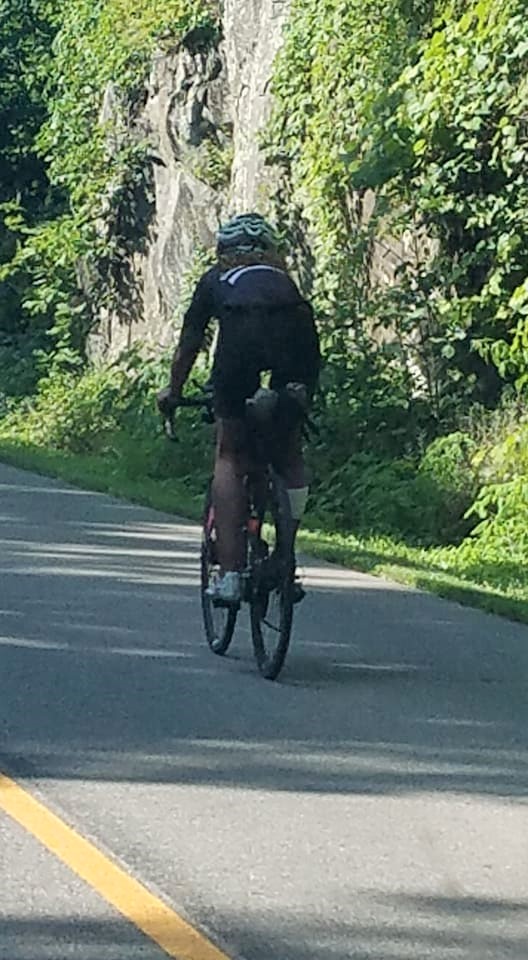 At one point I stopped to pee, and just as I was getting back on my bike, David Elliott reappeared with his friend Christopher Thomas. They said hello, then drove off and said they would see me a bit later. Sure enough, at the end of the Blue Ridge Parkway, there they were with fellow dot watcher Isabella Jones. I stopped to chat for a few minutes, got a coke at the snack trailer at the top of the Blue Ridge, then rolled down through afternoon commuter traffic towards Charlottesville. 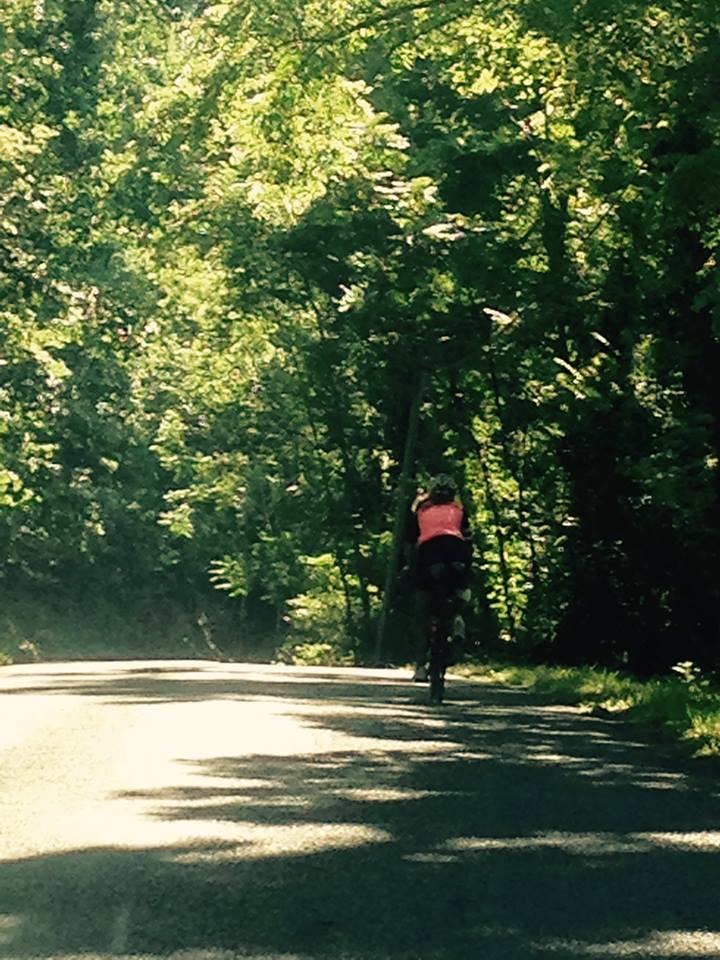 With its population of nearly 50,000, Charlottesville is one of the biggest towns on the Trans Am route. It was only about 8pm when I came into town, but I had decided to get a few hours of good sleep before making the final push to Yorktown. I went to an upscale convenience store that Evan had told me about, and while I was in the parking lot, some old family friends Sharron and Tom Leland pulled up. My mom had been planning to come to see me at the finish, but since she had broken her foot and had surgery she couldn’t travel. Sharron had promised her to find me and get a photo. 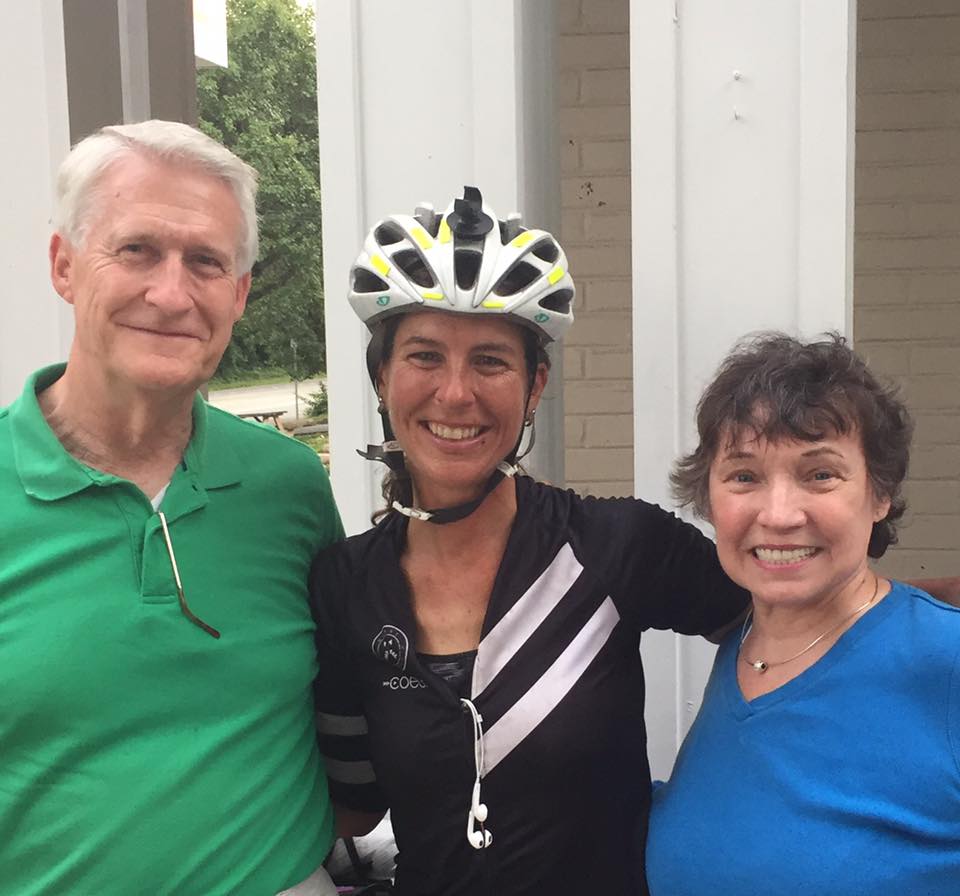 With Tom and Sharron in Charlottesville.

Jon Lester was getting close to the finish now. Only 200 miles left for me. I would finish it up after a last four hours of sleep.