After a 15 years of bike time trialing during triathlons, and the past two years dedicated to bike time trialing without the hassle of a swim or a run – including two Trans Am Bike Races – I was ready in 2018 to expand my bike racing repertoire. I already knew I loved gravel road riding, and was coming around to mountain biking, so I wanted to prioritize dirt-riding formats in my training and racing. 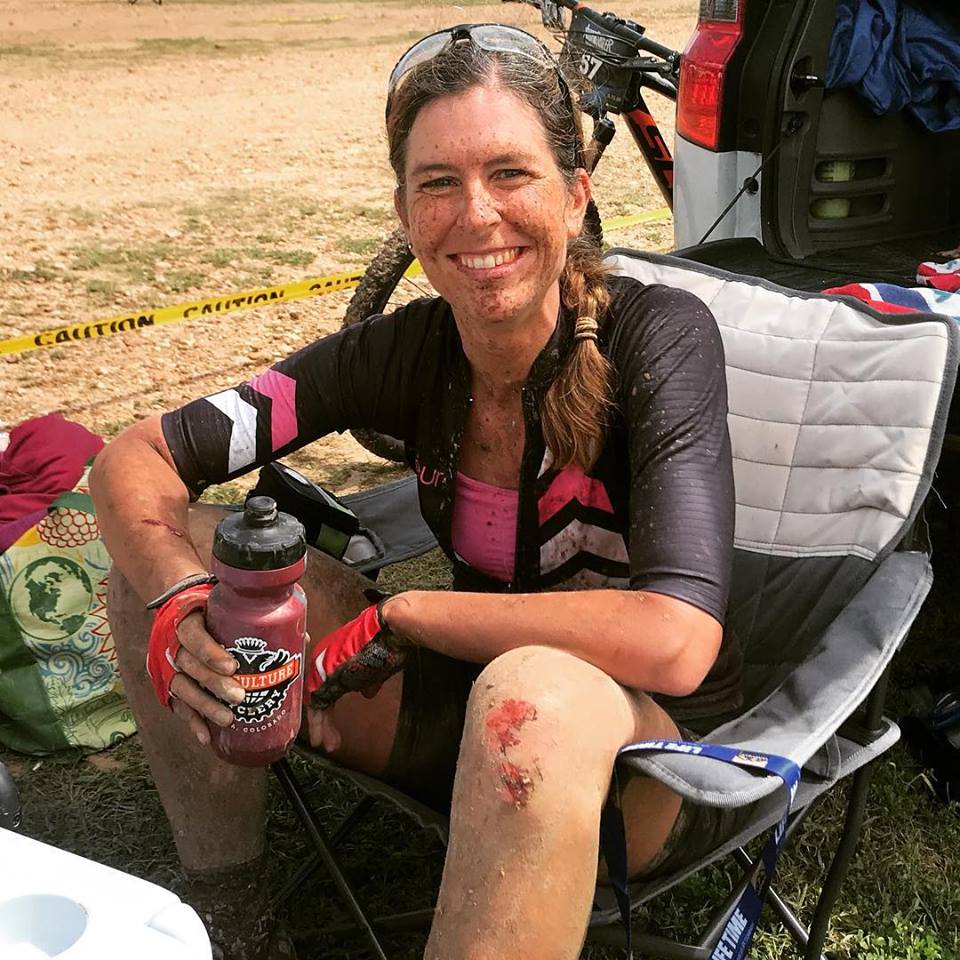 But when I went temporarily blind at the Pace Bend 24-hour road race and had to drop out after 14 hours, I sensed that I still had a few hours in the ultra road racing bank that I wanted to spend. So I decided to cram in the Maryland Endurance Challenge, which was held on May 20, two weeks prior to the Dirty Kanza 200. The Maryland Endurance race was serving as the National 12-hour road race championships for 2018, so I knew the competition would be strong. I also knew from riding in the area when I lived in DC that it would be a beautiful – and undoubtedly challenging – course. After talking with my coach Greg, we decided I could recover adequately from this race and still go into DK, which had been designated a major priority, still feeling strong.

One drawback of the race, in my mind, was that it was draft legal. Draft legal means that during the race you are permitted to ride closely behind other riders to get a speed advantage, a tactic that is common in road-bike racing but not so common in ultra racing. In fact, in most ultra racing and long-distance triathlon, drafting is expressly prohibited. As much as it provides a speed benefit, drafting often requires higher intensity efforts than non-drafting races because of the surging that happens as riders rest and recover, then pull ahead to the front of the group. It creates much more of a scenario for group tactics, and favors those who can put out big power surges (at least in the first few hours of a race when legs are fresh).

This kind of racing is neither my strength nor my happy place, but I had committed to practicing in training and racing this year. Plus, even though the race was draft legal, I knew that group riding was unlikely to happen for 12 hours, so I’d spend plenty of time alone in that place I prefer – alone on the aerobars with just my own breathing and thoughts (and burning legs) to keep me company.

As I suspected, the course was both beautiful and challenging. It consisted of 3 x 34-mile loops past Maryland farmland, through small towns with clapboard buildings and under covered bridges in the foothills of the Catoctin Mountains. There was about 1,100 feet of elevation per loop, gained through no sustained climbs but plenty of punchy hills (also not my favorite, but another area in which I am trying to improve). After that first 100+ miles, we were put on a 6.5-mile loop for the remainder of the race. Still rolling and never flat, with a couple of good climbs on the backside. 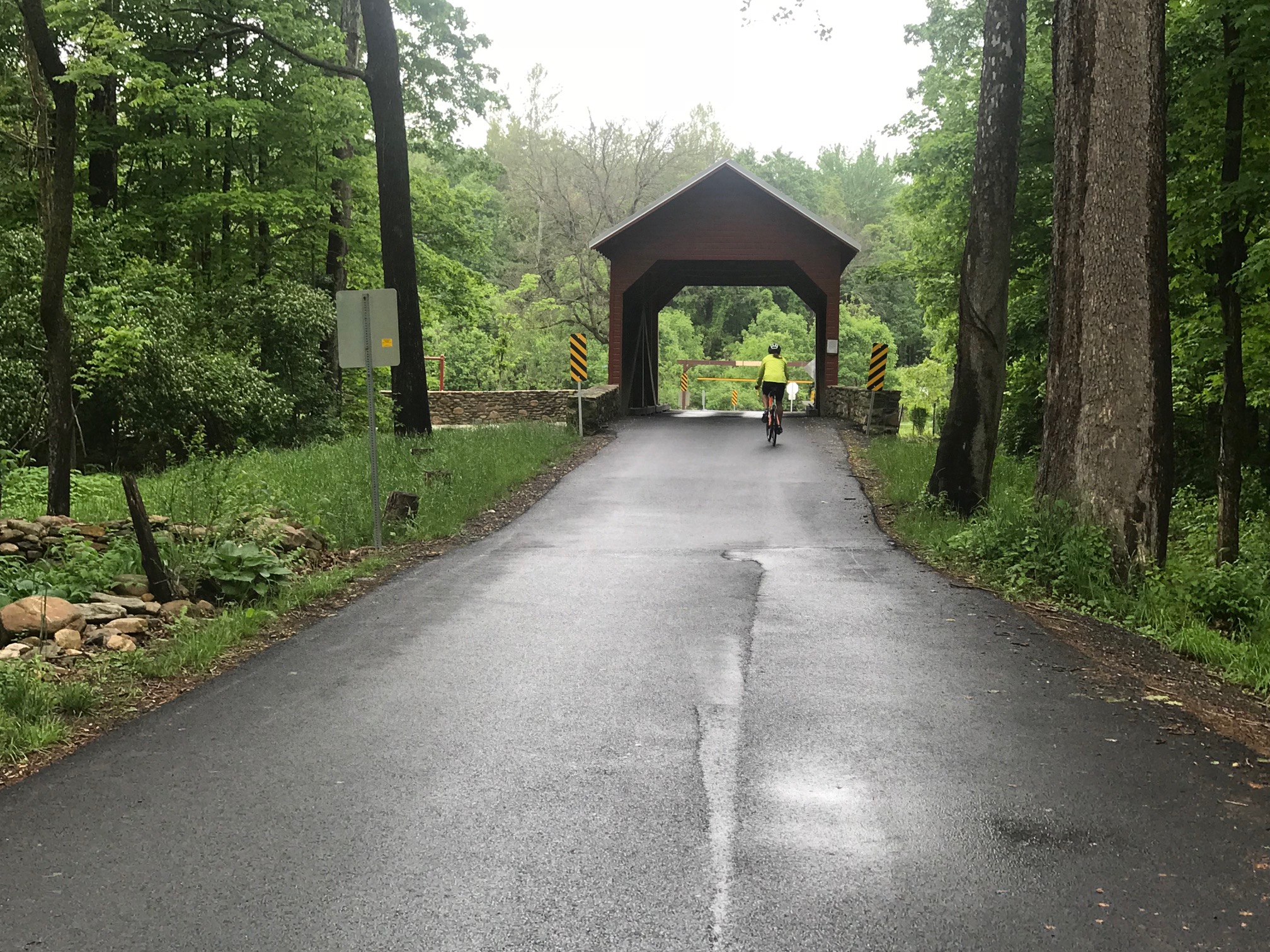 Covered bridges on the course

Jimmy and I flew out to DC a couple of days beforehand and got to visit with my brother and sister-in-law, as well as catch up with friends. I had envisioned a relaxing pre-race week, but as it happened a myriad of bike travel malfunctions befell. A proprietary bolt from my aerobars went missing during transit, so one thunderstorming afternoon found me rushing around Virginia, wet and bedraggled and desperate – to various Home Depot hardware aisles and bike shops, trying to find a replacement. The day before the race my rear derailleur seized up climbing a hill, forcing an unplanned long trip to a bike shop in a neighboring town. 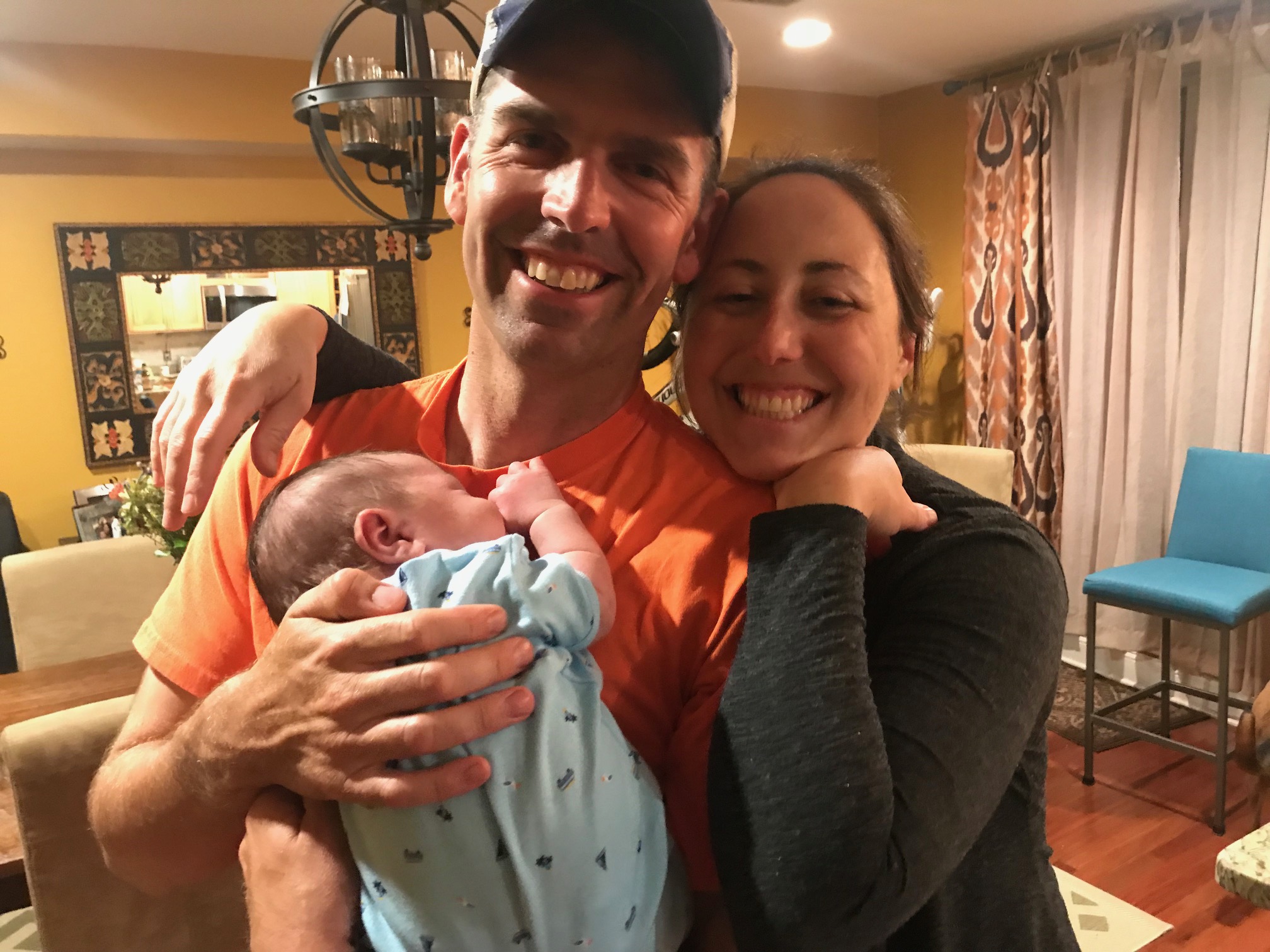 Visiting with these friends, and their newest addition, in between bike mishaps.

The morning of the race I woke up feeling pretty awful. Physically okay, but mentally unmotivated and uninspired. This was unusual. Race morning usually brings me a bit of trepidation, but usually with a nice counterbalance of anticipation and adrenaline. This day, the excitement and nerves had not gotten the memo. It was muggy and warm outside, compounding my bitter feelings. I resolved to put it aside. Jimmy and I ate a southern Virginia diner breakfast, complete with bad coffee and vinyl seats held together by duct tape. Photos of Donald Trump lined the walls, and plastic flowers on the tables. The waitress moved slowly, with a limp, but was friendly and called me darling.

Arriving at the start, the checklist of things to do provided a relief from the nagging feeling of dread, if stressful in its own way. No matter how much you’ve prepared for it, on race morning the sum all of the details – bike parts, nutrition, clothing, electronics – feels like one giant Jenga tower held together with scotch tape. Immediately, and predictably, my front derailleur began making some strange sort of clicking noise. The mechanic made small adjustments, but the clicking remained.

Nothing to do but shrug, as it was time to go. Someone said go and we rolled out across the start line. The pace was fast from the first half mile, as I knew it would be. Luckily, I was watching and ready. I jumped onto the wheel of Ken Ray, who I knew from the Trans Am in 2017 (Ken, as a rookie, crushed his way to a top 10, sub-20-day finish). After a handful of miles, looking back I realized that I was with a group of about 8-10 guys, and I couldn’t see any other groups on the road. 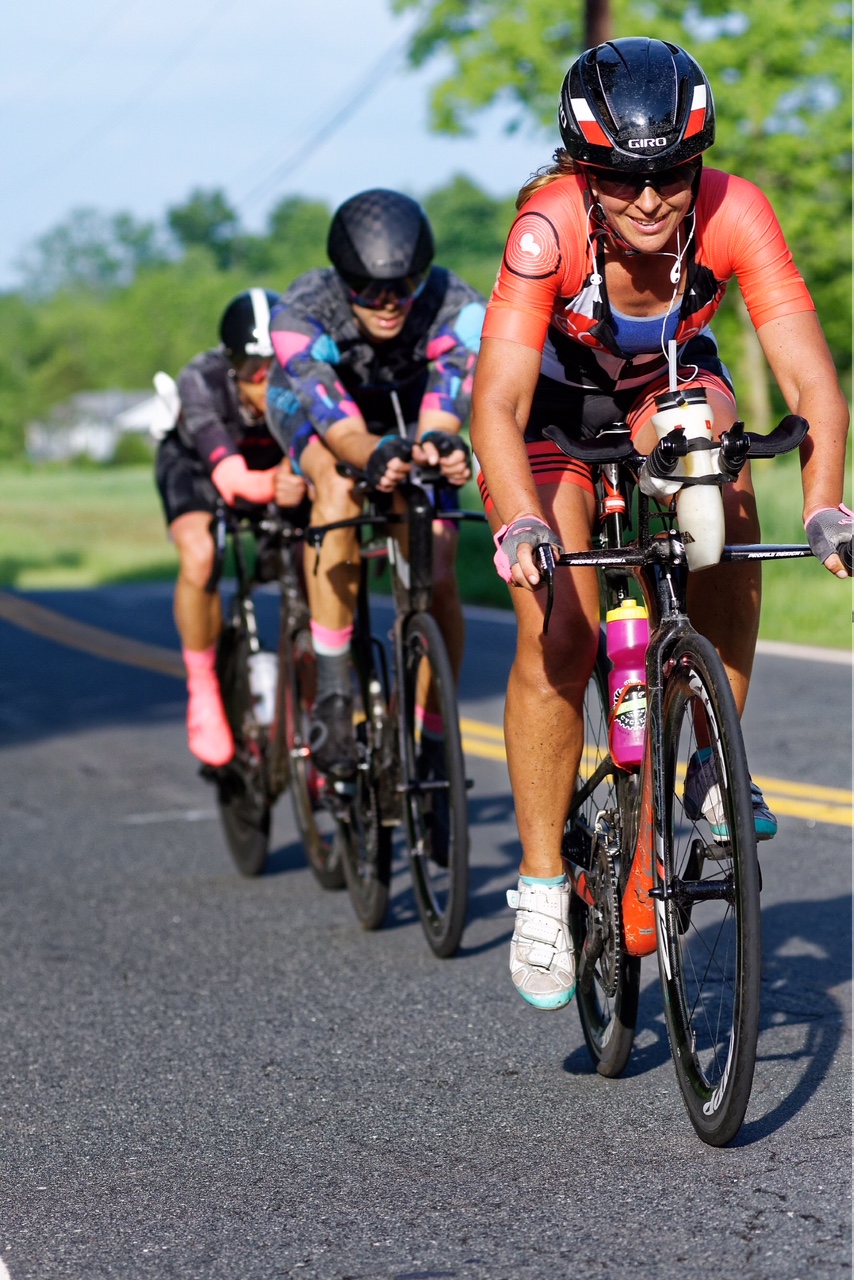 As the group whittled down to about six over the first 20 miles or so, I continued taking pulls at the front when it was my turn and trying to stay in contact on the short, steeper hills. I heard in a geeky bike podcast somewhere that a good tactic for less proficient climbers in groups is to edge up towards the front of the group as the climb begins, and then allow yourself to drift back as it progresses – basically with the hopes of remaining barely in touch by the time the top of the hill comes. I am not a bad climber – but compared to this group of guys I was probably one of the least capable of surging – so I tried this method and, for a while, it seemed to work.

Less than an hour into the race, I realized that I was already overheating – probably as a result of working at an effort a bit too hard for 50 minutes into a twelve-hour race. Paceline riding always requires a lot of concentration, and doling out mental energy can be as critical as physical pacing in a race this long. Not sure whether I was making the right decision, but not wanting to risk too much, I chose to drop off the back of the group as they surged up a small hill. Watching them ride away and eventually disappear, I sighed as I questioned that irreversible decision. Oh well. Nothing to do but put my head down and find my own rhythm.

A few miles later, I caught Marc Poland, who had also been with the group, and we began to ride together. Riding with one person seemed ideal, as it was easier to collaborate and nice to have someone to chat with. Unfortunately, not three more miles down the road, I crossed a dilapidated train track at a wrong angle and heard my front tire blow. Marc checked to make sure I had what I needed, then continued on. Oh well again. If I wanted to ride alone, it looked like I was going to get the opportunity.

I changed the flat and finished the first loop. No other riders had passed me while I was fixing the flat, but I didn’t have any idea how far back they were. The next two loops continued on without incident. Still, by the time I finished the third loop and ~112 miles, I was tired already. The race clock was only just past 5 hours, and as I headed out on the first of the short loops, I said sarcastically and out loud, “Well, that’s just great. Only 7 hours to go.” 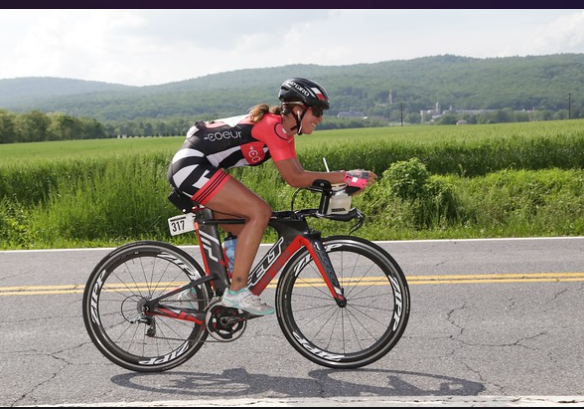 There’s always some crucial point during a long time-trial where my mind and emotions edge close to a breaking point. The whole thing is a mental game, of course, but usually there is a moment, oftentimes unexpected, where the whole task just feels completely overwhelming and inconceivable, and my mental and emotional resolve simply threatens to break.

Today it was only five hours into the race: not ideal. No matter. I let all the negative thoughts – ALL of them – run through my brain for a moment: heat, hills, can’t hang with the group, it hurts already, mechanicals, no one else cares if you finish, you should have taken up sewing, they didn’t want you on the cheerleading squad in ninth grade anyway. And then I just decided. I decided that I needed to make this day, this course, this race work for me. Not anyone else, just me.

I slowed a bit – but not a lot – drank a coke, put on my music, and focused on the road ahead.

I rode for a long time this way – and as I did, I got happier and happier. The miles, and the hours, counted down. Every time I finished a loop, I was ever more certain that I was not going to quit. More racers were on the course, which provided helpful distractions. I was able to chat a bit and cheer on other riders, which always selfishly makes me feel better. My friend Angela and her husband Eric came out to support me. Ken’s girlfriend Ellen was always there with a smile and cheer. I saw my friends John, Catherine and Joe, who were riding together as a time trial. The six-hour race got underway, and Jimmy had jumped in for fun on his gravel bike. Just about the time I saw him on the small loop, Ken Ray lapped me, and we rode together for about a lap and a half. We talked about the Trans Am, and joked around, and traded a few pulls. It was nice, even if I had to drop off his pace eventually. At the end of one of the loops about nine or ten hours in, James McNaughton – who would win the race in dominating fashion – blew by me. I had nothing to lose, so I stood up, jumped on his back wheel and we hammered for a couple of miles into the pit area.

My brother Danny had showed up to ride the three-hour race, which started at 3pm. At about 11:30 on my race clock, I was riding through the pit area and saw him a few hundred meters in front of me. I worked hard to catch him, and when I did he told me he was trying to catch a racer in front of him for second place. It was a good excuse to make one last effort, so I told him to get on my wheel and I focused on catching the rider in green. 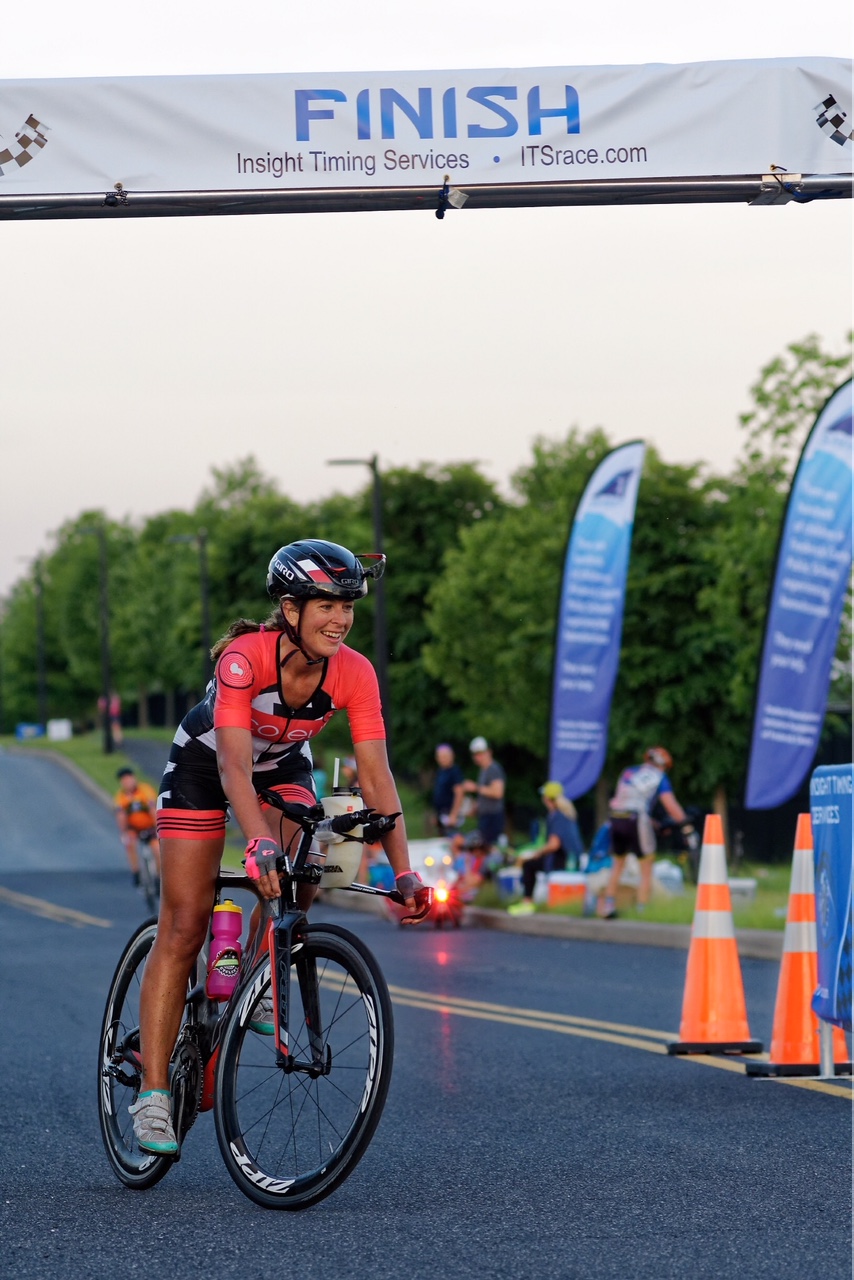 There’s little fanfare at the end of an ultra race. You just cross the finish line and declare yourself done. I was so happy to have finished that race. I was proud to win the women’s race, and especially the national championship title. But what really made me prouder – and a little wiser, too – was that I had seen the entire process of the day through. It was a day that had started hard, and gotten harder, but become a little more like magic as the hours went by. I was reminded that feelings are temporary, they don’t have to rule my outcomes, and that sometimes all I need is to slow down and do what comes naturally, and things just fall into place.