I wake up with my alarm at 3am. The moon is shining so bright. Nothing inside of me wants to get up and get on my bike. That’s ok, I’ll feel better after coffee.

I walk creakily down the equally creaky stairs. This lodge is charming, but old. There’s freshly brewed coffee on the bar where I ate steak with my hands last night. David is dressed to ride, and drinking a mug. I pour myself one.

“Look outside,” he says.

I go outside. The moon is sitting quietly over the lake. It’s so beautiful. For the second time in 24 hours, I have tears in my eyes. It’s not all because of the view.

I go back inside and sit on a stool next to David. I tell him that my heart isn’t in it, that I’m going to give myself some more time. He says he understands. He and two other guys are loading up. It’s a good time to start riding – they’ll be up Richmond Peak around sunrise. I give David a hug and say goodbye. That’s the last time I’ll see him.

I check Track Leaders to see where my husband Jimmy is. He’s about a day’s ride behind. I send him a text message.

“I’ve had a change of heart. I want to pull the plug on the racing thing. I’m not really having fun – and less interested in the abuse required. I want to see stuff and ride bikes with you. I’m going to wait for you at Holland Lake Lodge.”

As soon as I send it, I feel a sense of relief.

Jimmy’s response is quick, and not what I expect.

“’Try to regroup – and go on. I would love riding with you but give it a bit more time before you wait for me. I love you. You’re strong.”

“Get on your bike. Ride to the next place. Come on. You can. You’re trained to understand what you’re feeling.”

I was hoping I had found an easy enough solution to my internal struggles. But now our text conversation is just mirroring the two voices in my head.

“Keep doing the thing because you said you were doing it.”

“Do something different because you don’t want to do it anymore.”

I’m going to have to figure this out for myself.

“Get on your bike. Ride to the next place.” That message is easy enough to understand, even for a nimwit like me.

The other part of my brain despises this way of thinking. I think about Mike Hall’s words in Inspired to Ride during his record-setting Trans Am Bike Race in 2014: “We’re not curing cancer. We’re just riding bikes.”

It’s just a bike ride. Stop being so serious.

I decide that “ride with joy” is my mantra for today. I am ironically stern all day with myself on this point, and for the most part, it helps. 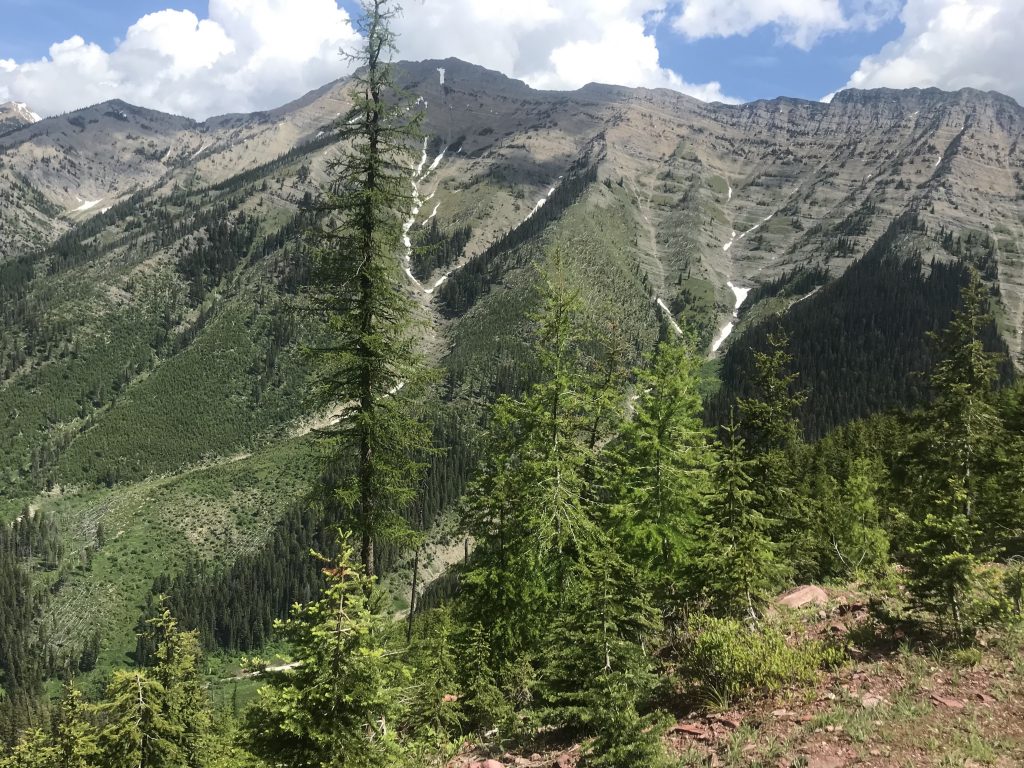 I ride over the single-track on Richmond Peak, hooting out loud on the descent, only stopping to chat with a forest service worker out to clear trees on this remote pass. The trail swoops and loops down the mountain and I feel like I’m bombing down from on the top of the world. 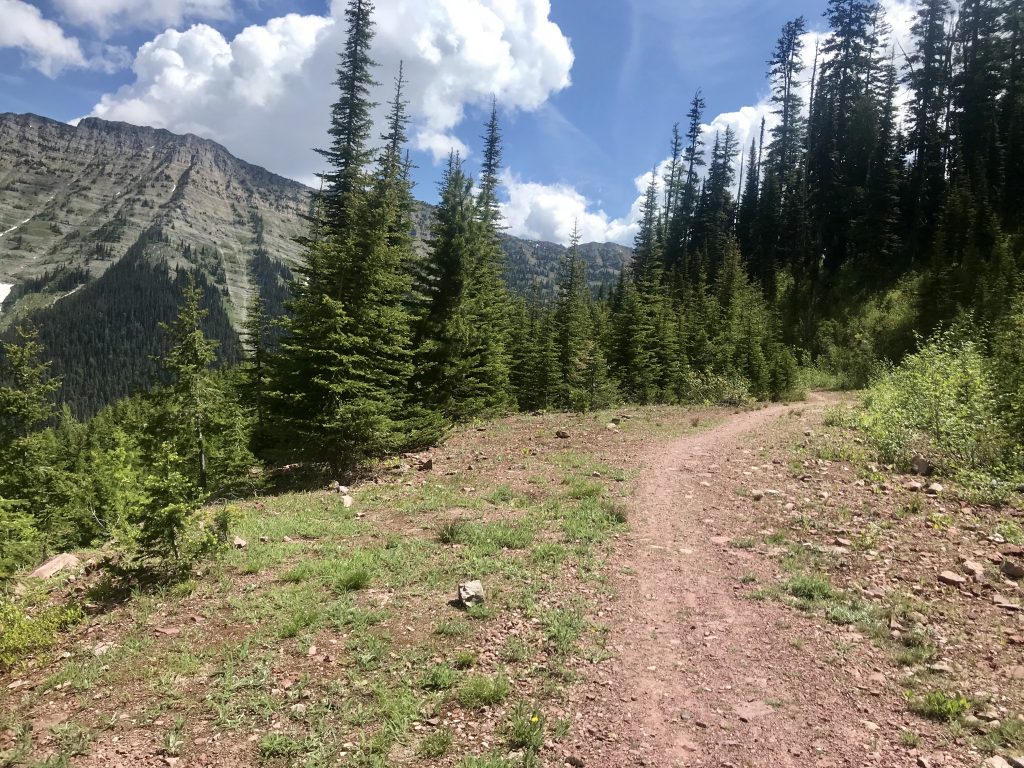 Before Ovando, I stop to watch horses playing, their stomachs heaving and manes flowing as their hooves kick up small tornadoes of dust. They run with such ease and power, no thinking just doing. It looks like freedom. 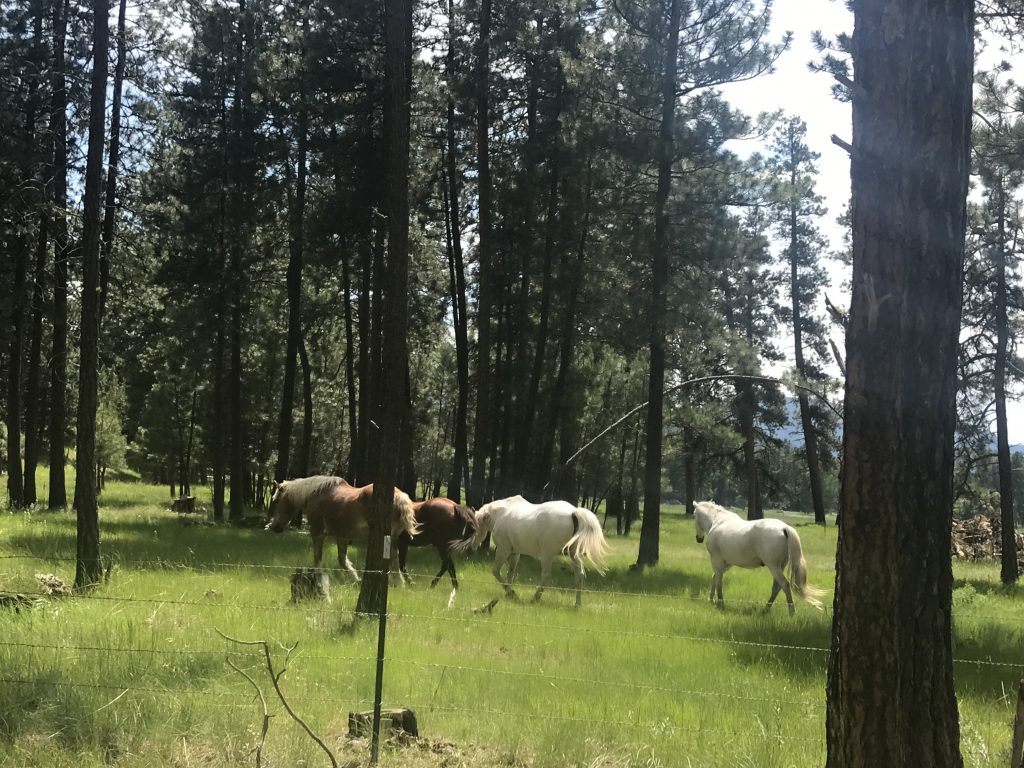 I encounter Aaron again, and we ride forest service roads into Ovando. Scott and Davy are there, and I chat with famous dot-watcher Kathy from the Blackfoot Angler fly shop. It’s fun to meet the icons of the Tour Divide, people who go out of their way to be generous to riders, despite the fact that most are out in the wilderness in an effort to escape our nonstop day-to-day world of human-ness. These encounters make me remember that our whole world is an ecosystem: the mountains, the animals, the plants, and us – the humans – moving like tiny specks through a moment in time. 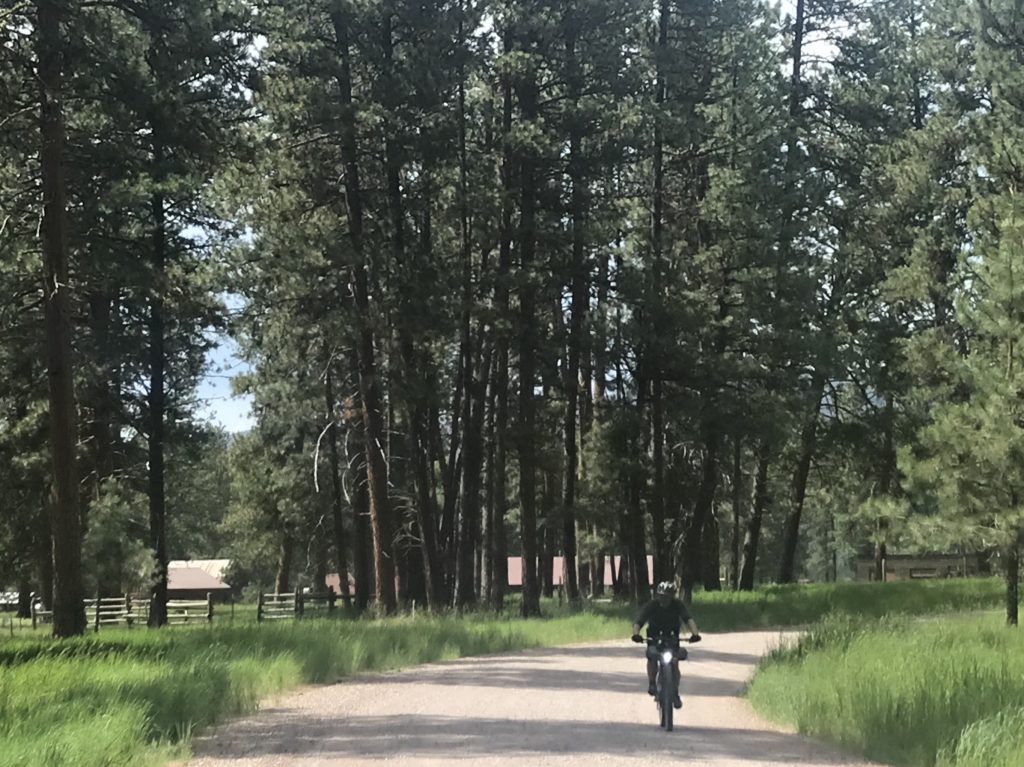 I go across the road to the convenience store where I am welcomed like a champion by the owners, even though they’ve seen at least twenty of us already. I buy homemade brownies and factory-made twinkies and Gatorade. They don’t even look at me funny when I come back in the third time for what I forgot the first and second time. 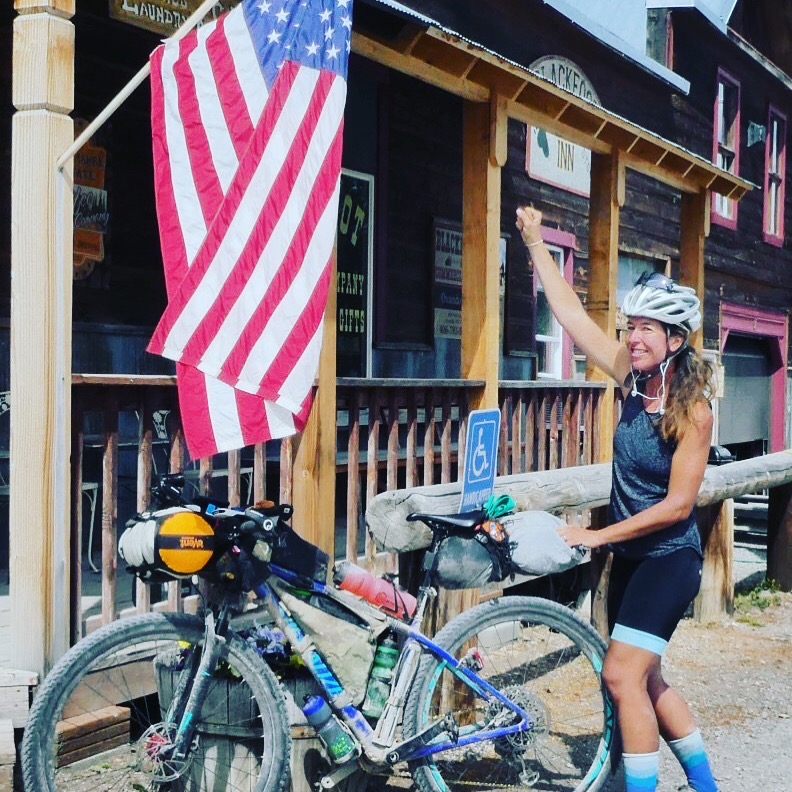 The road out of Ovando is a dirt, washboard track that goes off straight into the horizon for several miles before heading into the trees and up and over the next pass. There’s a headwind. I’m playing around in my aerobars, riding hard and enjoying watching the next forested mountain get slowly closer. I pass Davy from Ireland and we chat for a minute before I crank on.

I roll into Lincoln, Montana around dinnertime. I’ve only ever heard of Lincoln because it was where the Unabomber was arrested. I remember the day I heard that news; it was my birthday, April 3 in 1996. I was living in Austin and writing my senior thesis, about to graduate from college the next month. I had just run my first marathon in February and was still on a high from doing something I never thought I could do. My best friend Kim was pregnant and about to give birth to a baby daughter.

Terrorism still seemed mostly like something that happened to other people, in other places. In my mind at the time, Ted Kazcynski was filed away into a special category, only joined perhaps by Timothy McVeigh. The file was labeled something like “one-off lunatics” – alienated loners whose actions raised terrible questions but were extremely rare.

Now more than 20 years later, how many more names are in that file, and how much things have changed. On the other hand, rolling slowly through Lincoln and looking at the old motel, the Restaurant-Lounge-Casino, the aging Coca-Cola signs, it’s pretty clear that there’s a lot that hasn’t, too. I think about that first marathon. How here I am, too, over 20 years later, still trying to push my mind and body to some imaginary horizon.

On my way out of town to head towards Stemple Pass, I stop and call Barbara Nye. I’ve got her phone number scribbled on a cue sheet, as a trail angel who hosts cyclists on the other side of this pass. She answers and greets me more like an old friend than a smelly stranger. She tells me that their cabins are full, but I am welcome to sleep on a couch on their porch. This sounds like luxury to me.

I’m racing the sunset as I ride up Stemple Pass Road and grind up the last handful of rough steep miles to the top, always thinking I’ll have to get off my bike, but never quite having to. I’m slowly learning that the sections of this route that I dread the most are often those that feel the most satisfying. I like the attention, and the focus, required by the steep, rocky and rooted sections. The riding is consuming, and rewarding in a strange way.

I coast the steep downhill towards Barbara’s that loses more than 2000 feet of elevation in seven miles. Parts of the road are rough but lit by a strong moon and a cloudless sky. I’m feeling more exhilarated than tired – partly due, I guess, to my late start to the day. Still, it’s been a solid day, full of good riding, beautiful scenery, and the kindness of humans.

It’s almost 11pm, but there’s more still to come. Barbara has given me the mileage from the top at seven miles, and I start wondering if I’ll be able to find her place in the dark. Suddenly, ahead of me, there’s a spotlight shining. As I roll up, a man with long white hair and a friendly smile calls out my name.

“I’ve been waiting up for you,” he says, and ushers me into the house.

John has Trackleaders up on the screen like a command center, next to the digital weather station, and he shows me how he’s tracking the riders one by one as they near. He apologizes that Barbara is already asleep and offers to make me dinner and points me to beer in the fridge. He shows me where the bathroom is and where I can plug in my electronics. I tell him I am happy to sleep outside, but he points to the couch in the living room and gives me a pillow. He and Barbara are hosting ten cyclists tonight.

I’m blown away by the whole thing – the welcome, the kindness, the generosity. John says they don’t want donations, or a review, just to “pay it forward.” It’s funny, I think as I fall asleep, that in this big quest for a solo, wilderness adventure, some of the most remarkable moments stand out because of the simple generosity of humans.