I wake up on Barbara and John’s couch with their dog sleeping next to me. It’s still dark as I pack up, and I head out shortly after Dylan Gonda, who slept on the floor in the dining room. It was a packed house last night at the llama farm, and as the sun rises I spot Beau climbing in front of me, and Dylan a bit later. Dylan is off his bike and I stop to see if he is ok, but he says he is just dealing with a cleat issue and waves me on. 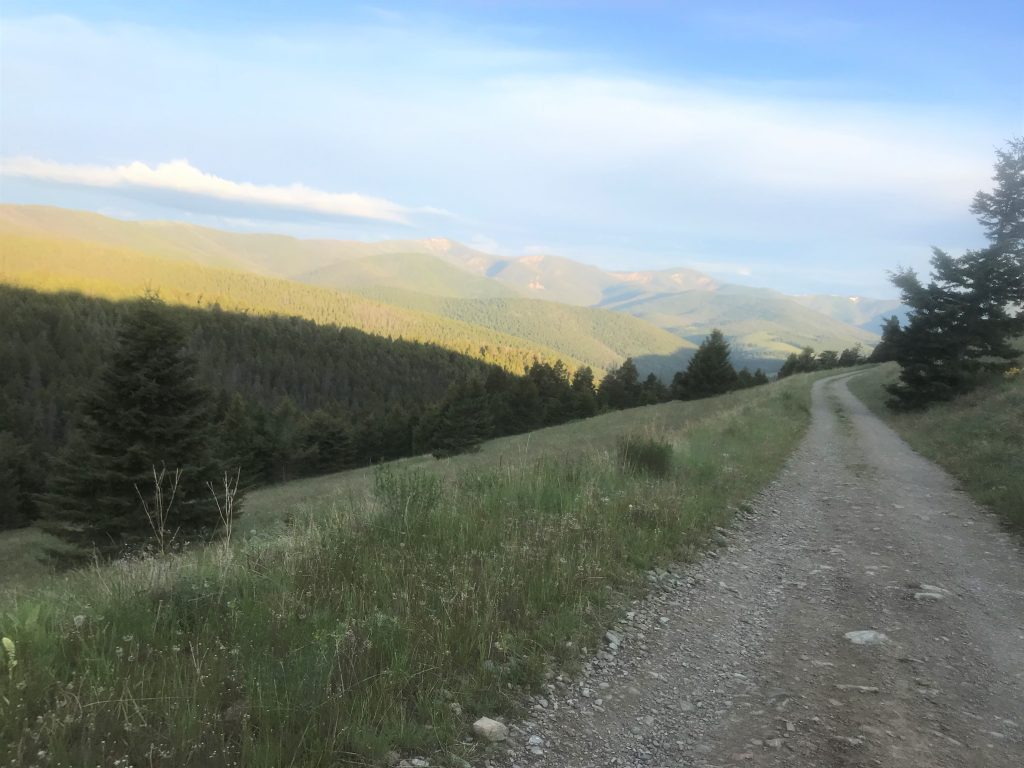 The route crests a couple of passes, which go by unremarkably, before dropping into the outskirts of Helena. I join weekday morning traffic for the last 20 miles into the city, wondering where everyone is going. 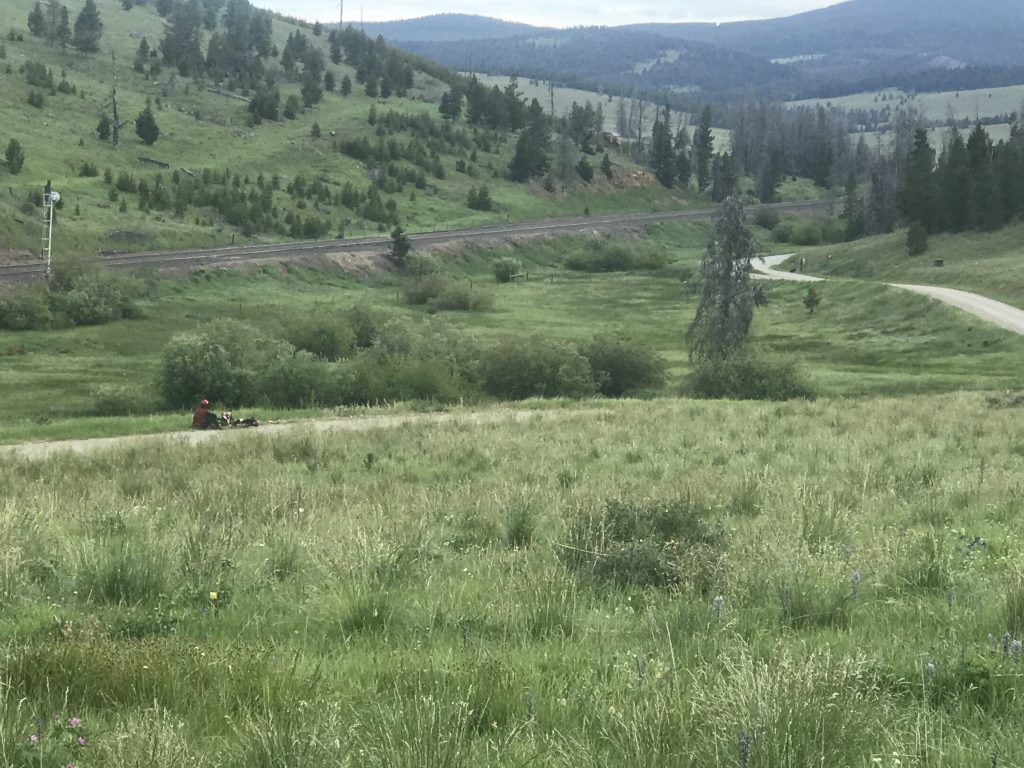 There’s this game I play with myself when I’m riding into a town. I look at the people in the cars passing me and I make up stories about their lives.

That guy looks like a teacher. Sensible car, clean-shaven, collared shirt, late-20s. Middle school, maybe.
Wait, why is he turning into the Burger King?
Maybe he woke up late because his alarm clock didn’t go off. Then he realized all the power was off and he couldn’t make coffee.
Yep, that’s definitely it.
But isn’t he late for school? Oh wait, school is out, isn’t it? It’s summer.
Oh okay. He’s probably going to the library.

Such dull stories. But the time passes.

I haven’t heard from Jimmy since he urged me to continue on with my plan yesterday morning. I get a text from him while I’m in Helena.

Get any mojo back?

I don’t know how to respond, so I decide to choose optimism.

Mojo back, I reply. Maybe typing it will make it true.

At Hardees, I order a bacon egg and cheese and an egg and cheese and a large coffee, and they give me the coffee for free because they mess up the order and put bacon on the second one. The manager comes out to effusively apologize and I have one of those moments where I see myself from outside myself, standing at the counter dirty and disheveled, and I want to say, “Ma’am, if you had any idea what is going on out there in those woods, you too would appreciate the true insignificance of this situation.”

I spend a while eating food and staring out the window at the busy street, instead of eating on the go like a racer should. Then I amble over to the grocery store next door to look for A&D ointment for an emerging saddle sore.

I walk up and down the aisle, squinting at the face creams and the painkillers and the first aid, and I can’t  find it. When I ask the shelf-stocker where I can find A&D, to my surprise he launches into an angry tirade about how they don’t stock it, and it’s ridiculous because every kid needs it, and there are a lot of parents around who need it and they come here and can’t find it. It turns out it’s also personal, because one time his kid had a diaper rash and he ran into work late at night to get some and discovered that the store didn’t stock it and then had to drive all over town in the middle of the night while his kid was crying at home.

I take the climb out of Helena and eventually reach Lava Mountain Road – a tedious section of on-the-bike, off-the-bike rocky, rutted and steep road. Luckily I encounter Beau there, and we chat for a bit which passes some more time. Beau lives not far from me in Colorado, and we have mutual friends. Unfortunately, he’s suffering from Achilles issues. I remember hearing from some other racers in the Trans Am about how taping their ankles with physio tape helped them, so I mention that. (Turns out, it helped. And even with a complaining Achilles, less than two weeks later Beau would post an incredibly speedy Tour Divide finish time of 18 days – you can read about his great journey here.)

The Lava Mountain Road ends, eventually, and I am happy to be riding nonstop again. The route funnels out onto logging roads, and I start riding uphill into the forest onto a rough red dirt road.

The road climbs and climbs, becoming rougher, and eventually hitting a snowdrift that I have to get off my bike to pick a slow line through.

I vaguely notice that there are no other bike tracks, but only in the vaguest of ways. I remount and begin pedaling uphill again. At some point, the road comes to an intersection and I realize that my Garmin has not alerted me to a turn. That’s when I notice that my location is marked by a lonely, thin blue line on the screen, hanging far away from the strong, thick pink line that represents the route. I’ve missed a turn, and not by a small distance either.

Luckily my dalliance has been uphill, so I have paid the piper already. Within a few more short minutes I’ve rejoined the route and head in the correct direction downhill to the tiny town of Basin, alongside the highway.

There was a time about 15 years ago when I was taking a lot of road trips. At some point I had this idea to create a coffee table book featuring the old houses (and people who live in them) whose front yards had been overtaken by highways, during some development initiative or another. I always wondered about the reasons why the people in those houses stayed, while presumably many others left, their houses bought, torn down and recovered in asphalt divided into six or eight car lanes. Those houses, I thought, still stood as physical, crumbling reminders of how rural America used to be.

I never got around to that book. But to me Basin felt like a small-town version of those houses. A main street with a jumble of old houses sitting right on the busy I-15 highway, neither the traffic nor proximity to Butte seems to have spurred its economic development. There’s a certain charm, though. I see two Tour Divide rigs outside the old café. Even though I have done enough sitting and eating today to meet a several-day quota, I decide to join them.

Inside at a corner booth I find Beau, and also Alex, who I have not yet met. Alex is a Brit with an easy laugh and an irreverent sense of humor. This trip is his first time to America, and his first time eating fried chicken. I order a giant plate of fries and drink several cokes from a straw out of a thick red plastic cup.

It’s a warm afternoon, around 80 degrees, when I head back outside after another 45 minutes. In fact, the whole day has had a slow-motion feel, almost lethargic. The riding has been slow, for sure; with 8,000 feet of accumulated climbing so far, some hike-a-bike, and a snow detour, I’ve only managed to cover 80 miles so far. Still, it’s not evening yet, so I should be able to get well past Butte, which is only 30 miles away, tonight.

As I get on my bike, I spy a sticker on Beau’s top tube. It says simply, “Relentless forward progress” – no doubt a useful motivational motto for him, and one I have used many times before to get me through tough times in races. In 2014, in fact, when I raced the Kona Ironman and spent most of the second half of the marathon having diarrhea in the lava fields, this is the very saying that got me, finally and in the dark, to the finish line. One step after another, relentless forward progress.

But today, simply reading that saying has the exact opposite effect on me. I feel something inside of me recoil at the words, and a wave of actual nausea washes over me. It all happens completely instinctively, and in a split second, and I shake it off quickly. Whether it’s too many fries, or anxiety about the mental suffering I am experiencing over the race, I have no idea. 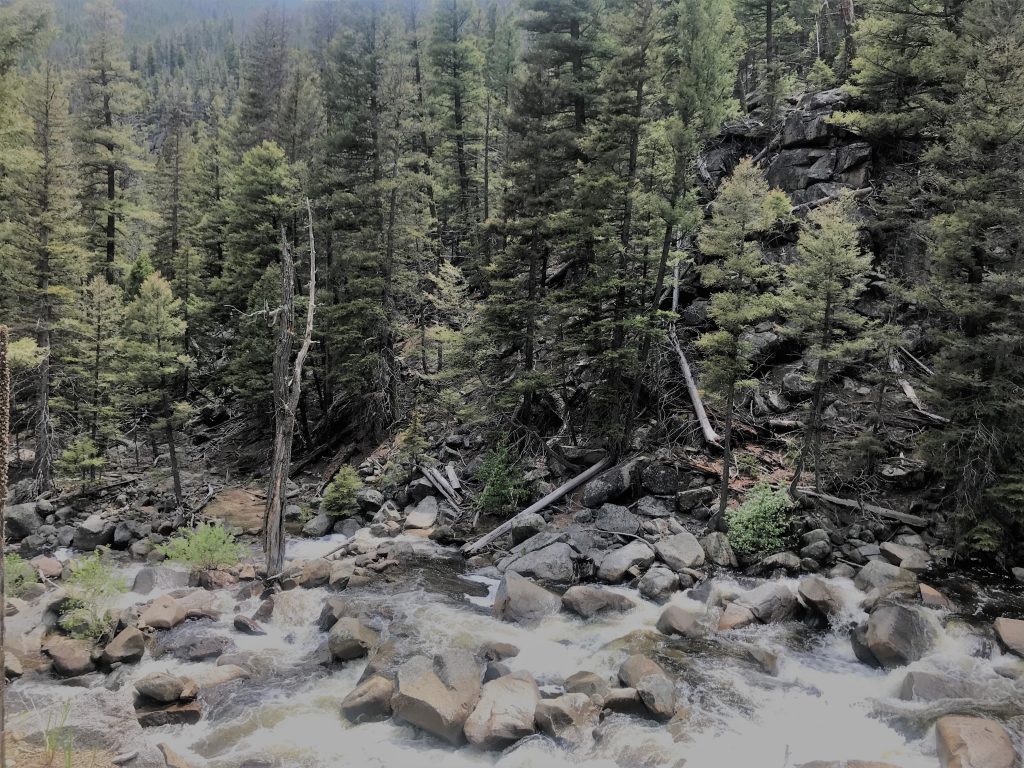 Regardless, I enjoy the ride to Butte. There’s climbing, but it’s steady and not too steep, and the route runs along a full stream that meanders alongside the dirt road. I ride ahead, but Alex quickly catches me. We talk about bike racing, and his impressions of the US. He drops me on a rowdy downhill, but I can just keep him in sight as we hit a hilly paved road into Butte. It’s lucky, because my Garmin dies just as there is a series of turns; I have to ride hard so I can see where he is going.

The route enters Butte from high above the city, and I stop and enjoy the view over the valley. We turn onto a technical section of singletrack to descend into town, and I skid out and almost dump the bike on the last sandy downhill to the road. 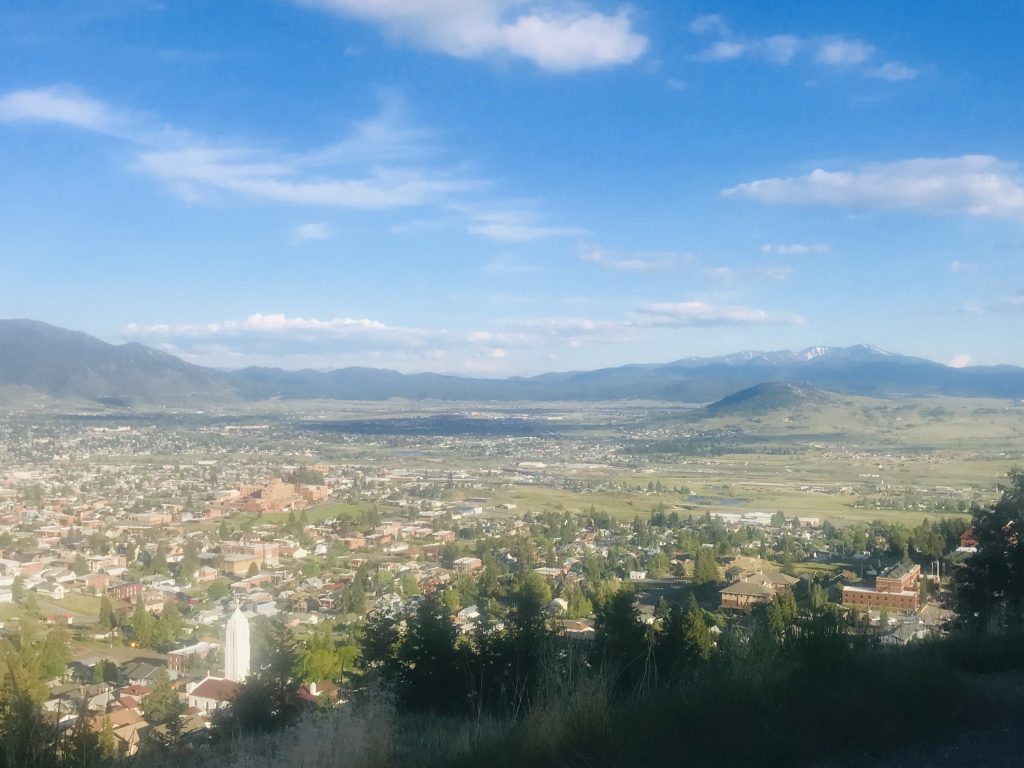 It’s evening by now, but not late. There’s plenty of light in the sky as I roll downhill through Butte’s downtown. I feel completely disinterested in riding ahead but know that I should. If I don’t, it’s a second day in a row of not hitting the mileage I’ve planned for – and I should have another 20-30 miles in me, easy. I screw up my eyes and try to muster up the will to go on. I call Jimmy from the Subway parking lot. He’s still riding and says he has a couple of hours left.

I order two footlong Subway sandwiches. I decide I don’t care, and I’m not going any further. Maybe, just maybe I think, I’ll wake up early and get it done tomorrow.

Surely, tomorrow my mojo will be back.