When I wake up in Lima, I’m out of food. It’s 86 miles, and another state, until the next place on the route I’ll be able to get some. The Lima convenience store and café open at 7, which is practically afternoon on the Tour Divide. Still, it’s not a hard decision at this point. I’m waiting.

There’s still a part of my brain that’s berating myself incessantly: for not doing better planning, for not caring more, for not being willing to pedal more hours a day, for climate change and war and everyone else’s failed relationships.

But that voice is getting a little weaker now, after the last seven days I’ve spent trying (and failing) to get myself to want what I thought I wanted just a week ago: to really race the Tour Divide. The shaming voice is not quite so loud, it’s not quite so insistent, and I’m more able to roll my figurative and literal eyes when I hear it.

I sense that the game is almost up, played out. But I’m not quite ready to surrender. It’s sheer stubbornness at this point, maybe tinged with a bit of curiosity, that’s keeping me going. Is stubbornness helpful or unhelpful now? Who knows. It is what it is. 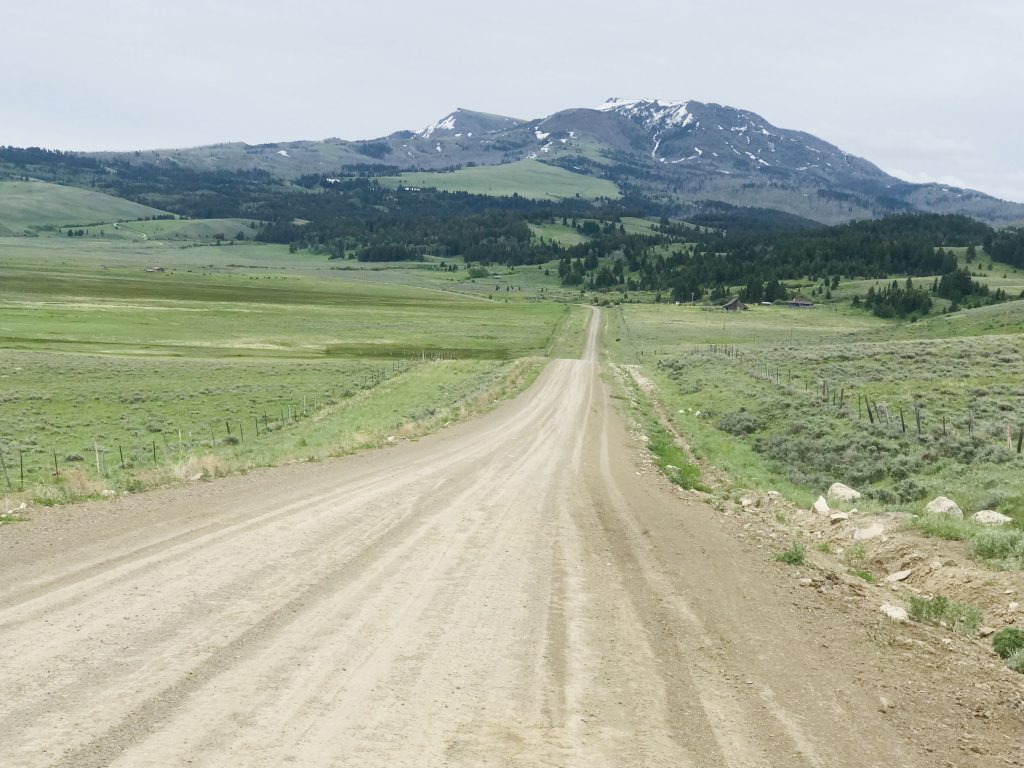 I stubbornly ride out of Montana and into Idaho in the morning, amidst the threatening clouds and occasionally ferocious headwinds. The roads are nice, and even though I have a vague idea that I’m near Yellowstone, it’s quiet and I see very few people.

Leaving Montana into Idaho happens at the top of a short, steep pass, but it feels anticlimactic. I know the truism everyone says about the Tour Divide: “If you make it out of Montana, your odds of finishing go up exponentially.” Even though I won’t quit for another eight days, something inside of me already knows I’m going to be one of those who bucks the improved odds. 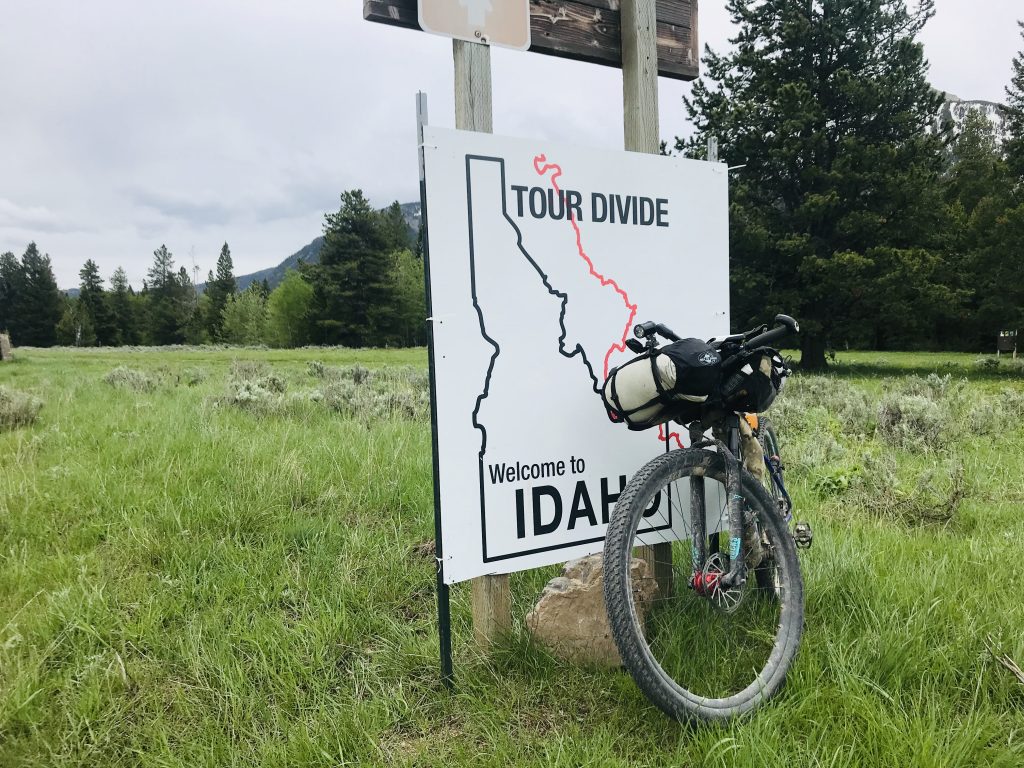 A few miles later, I turn on a road that meanders from open range to forest cover. It’s so lovely there, and there’s a patch of green moss that looks like a secret. Almost without thinking, I stop and lay down. It’s early afternoon, and I watch the clouds move quickly past a bright blue background, changing shape from elephant to teapot to dragon. The wind has been picking up through the morning, howling at times. But now that I’ve reached this canopy of trees it’s only a whisper.

The breeze brushes the skin on my filthy legs. So quiet here, so beautiful. Feels so good.

Get up, my brain says, bristling at the first feel of relaxation. Ten more miles to resupply. Lots of miles to go still today. No time for this.

I sigh and sit up. It’s true. But I still feel like a kid being pulled away to do chores from playing outside. 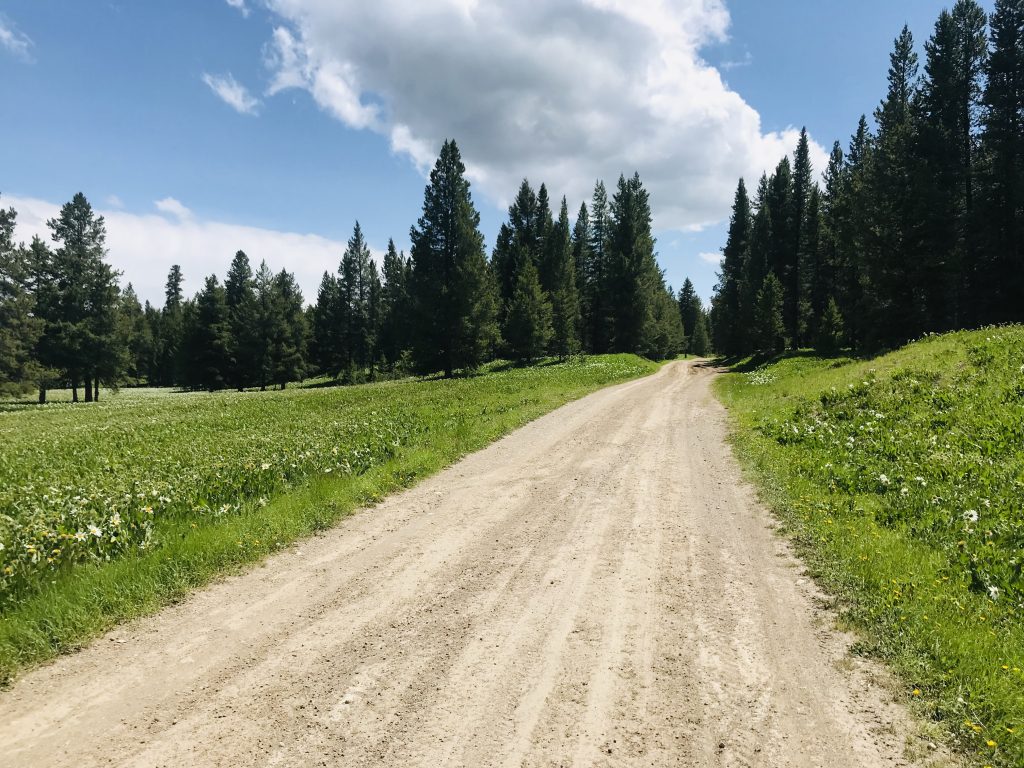 I throw a reluctant leg high over my bike and start pedaling down the forest road. Not paying attention to my Garmin, I immediately take a wrong turn. I ride for about ten minutes the wrong direction into the forest before I realize my mistake. This is becoming a habit. Sighing again, I retrace my bike tracks and return to the junction.

I meet Ryan who is riding up from the opposite direction just as I get there, and we make the turn together. I guess he must have also stayed last night in Lima. I’m happy to see him. Ryan has a joyful, almost musical, way of riding. He is constantly swerving around little divets in the road, standing to sprint over small obstacles, bunny hopping rocks and cattle guards.

I trail a bit behind him, trying to bunny hop. The first time I try, nothing happens – the loaded bike requires a lot more pull to get airborne than I anticipated. But the next time, I manage it right and get a little air. It’s fun. I’m following a couple bike lengths behind, trying to see the trail as he sees it. I feel a little like a kid riding a bike again. 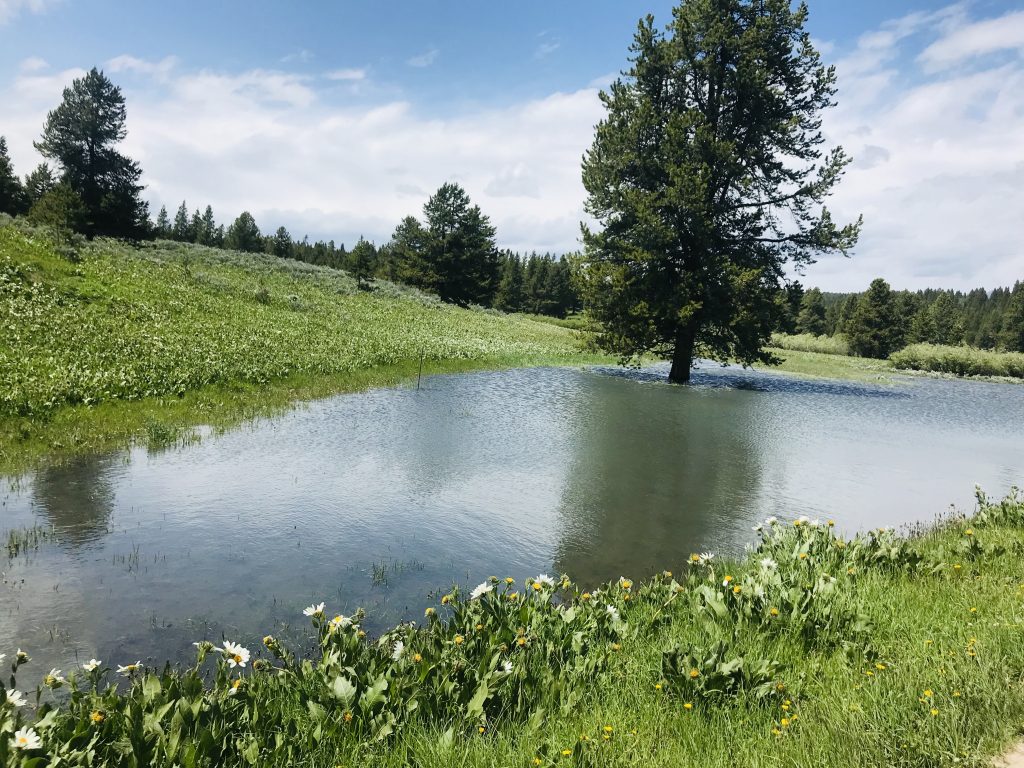 We roll up to a closed gate over the road that we need to go around. Instead of dismounting and walking around it, like I normally would, I try to ride down the short but steep cut-around, and crash on the ground on my right side. No big deal, a small almost invisible abrasion on my right knee, a bit of wounded pride as I awkwardly unclip from the pedals.

A few minutes later we are in Sawtelle, Idaho (which also seems to be called Island Park, Idaho). It’s not much but a restaurant, two convenience stores, a couple of hotels. Ryan and I eat lunch on stools at the restaurant at a mahogany bar. One of the guys who works there comes out to tell us that he’s hoping to do some long-distance bike touring, and we encourage him. I can see the eagerness on his face. All he wants to do is get out of this restaurant and head off into an adventure.

We’re about to head out on an adventure of our own, it seems. There’s a storm coming in, promising snow. The Yellowstone and Teton tourists are stocking up on food and talking about hunkering down. The cashiers in the convenience store are saying this is the craziest weather they’ve ever seen the day before the summer solstice. It’s starting to get a bit blustery outside. I realize that, earlier in the day, I had no awareness of this impending storm. But now that I know it’s a possibility, it feels like some sort of inescapable emergency.

Compounding my worry, the next stretch of the route is rumored to be tricky at best, miserable at worst. It’s a 20-mile “rail trail” that we hear is covered with thick sand. We don’t actually know the details, but it sounds rather exhausting.

So I do the only thing that makes sense to me at the time: I try to quit my race. I walk across the street to the hotel and ask for a room. I’m at the end of my rope mentally, or at least that’s how it feels at the time. I’m done. What a relief.

But it’s a Thursday on a summer weekend and there’s no room at the inn. The owner can see that I am crestfallen to have been outwitted from my plan, and personally calls every other hotel in the area, to no avail. He offers that I can sleep outside the motel on the wooden deck in the cold, all the while looking dubiously at the darkening sky in the distance. The wind is picking up and there are pieces of trash starting to be lifted into the air and blown around the parking lot in little cyclones.

Get on your bike, ride to the next place.

And I’m happy that I don’t quit. At least today, because still ahead for me are unexpected blessings, like laughter and a sunset… and beer.

First Ryan and I ride the notorious rail trail, and it’s indeed sandy but we take it easy and chat about everything and as a result it does not live up to its reputation. Somehow, we slip between storm systems, only pulling on our rain jackets for a handful of drops, and the sun even peeks out every now and again. 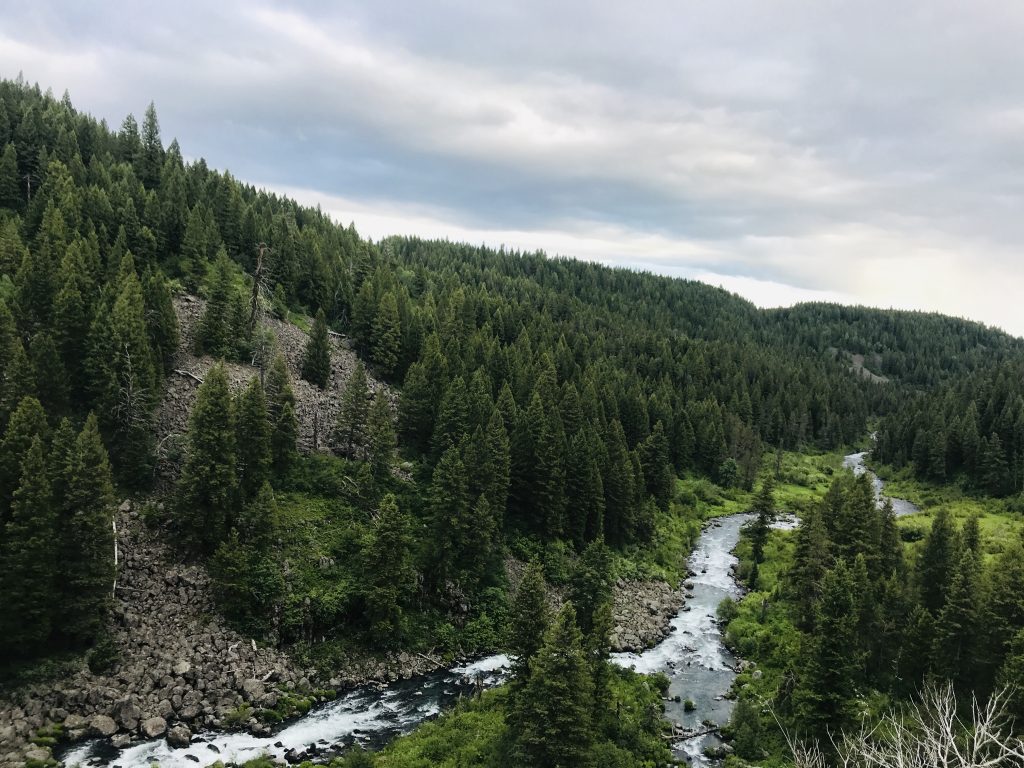 Eventually Nate Stillwagon joins us, and we continue in a three-pack onto the swoopy trail along the Warm River that deposits us into a campground at dusk. The sky is black on one side of us, but the sunset is gold and orange and firing up the sky on the other. For hours, we’ve been riding somewhere in between. 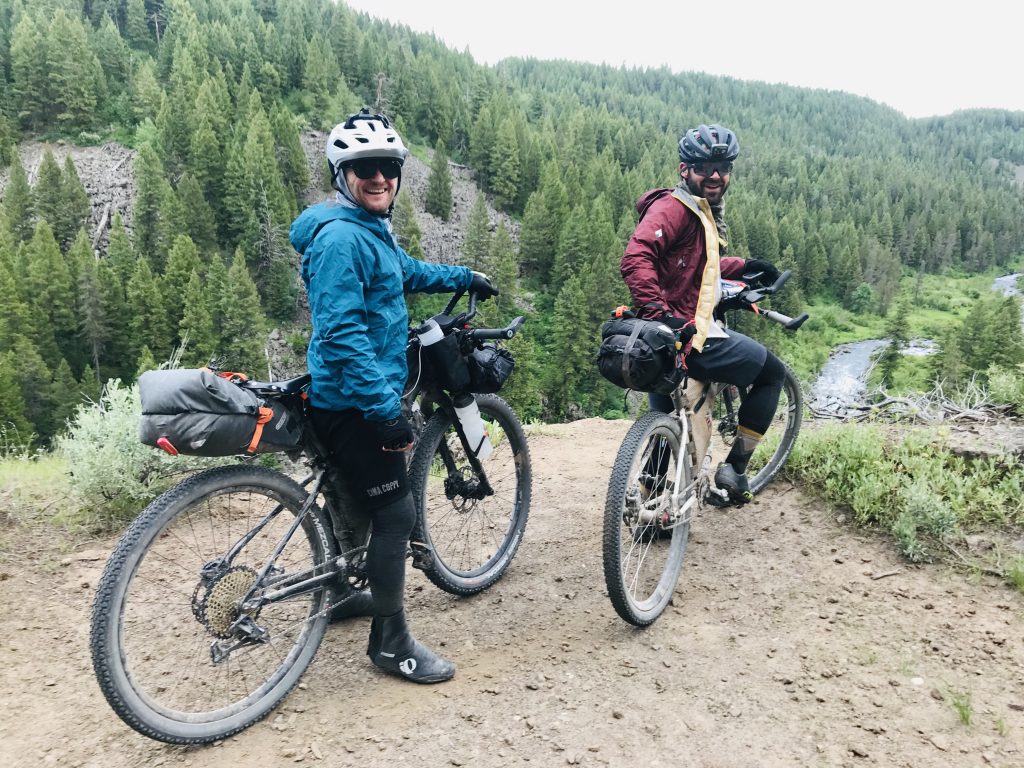 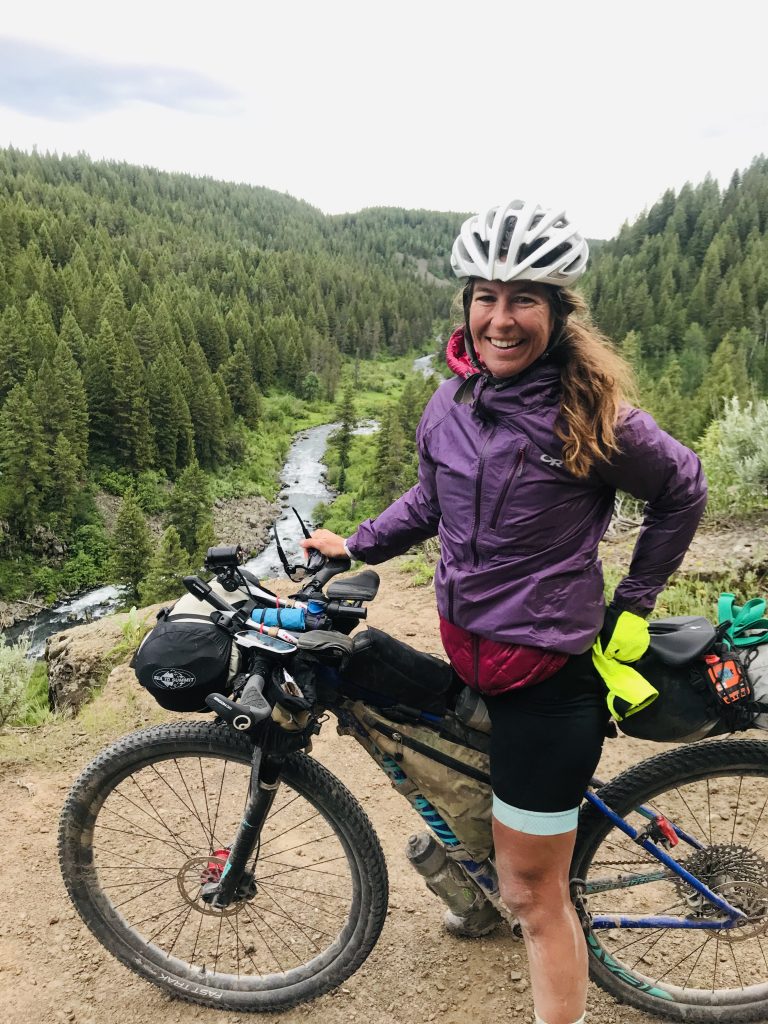 We regroup at the Warm River Campground and agree to head to Squirrel Creek Elk Ranch for the night. Looking at his Garmin, Ryan reassures us, “Just one mile, then left for two miles, then right for three miles, then left for two miles, then we’re there.” Tantalized by the end point, we take off riding hard up the hill and then I just try to keep Ryan’s rear light in sight as we time trial (admittedly a pretty limp-noodle time trial, but it feels like light-speed so who cares) to the Squirrel Creek Elk Ranch.

On the front porch, the owner’s daughter is sweeping and welcomes me inside. It’s warm and light, and there’s a fully stocked bar and a menu on a chalkboard, and soon we have burgers and fries and beers on order. Ryan is joined by me, and then we’re joined by Nate, and then the three of us are joined by Robert, and then the four of us are joined by Beau. Each one has a different tale to tell – some variation on the same theme that we’ve all experienced today. It kind of feels like a party. A tired, lame party – but a party nonetheless. We’re even joined by a local drunk who wants to talk to us and slurs the same questions, over and over.

For my part, I feel like I escaped something today, but how long I can keep it at bay it isn’t clear to me. The guys plan to roll out at 5 and ask if I am coming. I’m non-committal and know that this might be my goodbye to most or all of them, even though I don’t say it.