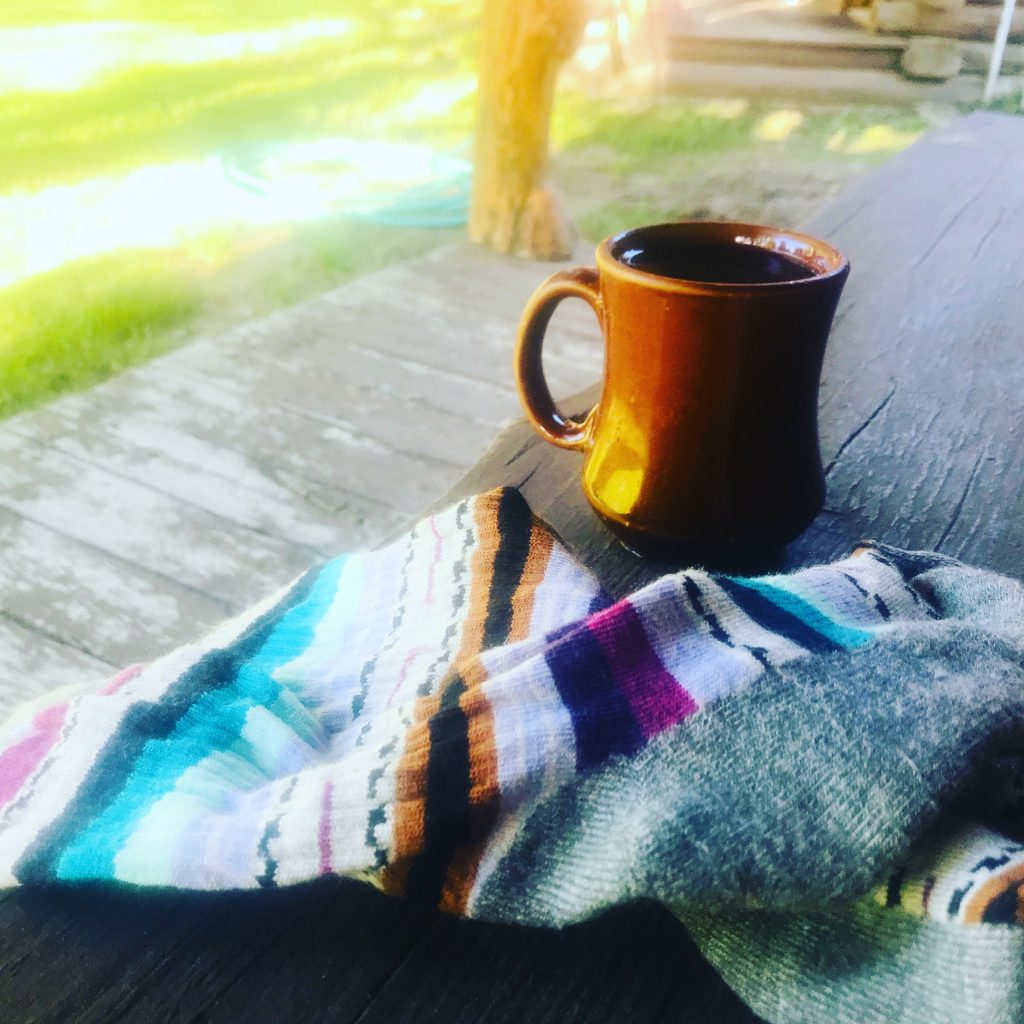 It’s a second-cuppa-Folgers and clean-pair-of-socks kind of morning. There’s a soft dew on the ground when I get up and, despite warnings of snow, the sun is quietly shining. I stand on the porch of the cabin and wave to Nate as he heads out. I heard Robert, Ryan and Beau leaving around 5am and vaguely wonder where they are now.

I roll into the sunshine around 8am. I’m feeling relaxed, and grateful for the adventure. Somehow I feel aware that I am living a story – and a pretty good one at that – though I am completely unclear about where it is going.

The pavement ends shortly into the Targhee National Forest and onto rolling forest service roads that have been dusted with a layer of pea gravel, which makes the going bumpy and slow. 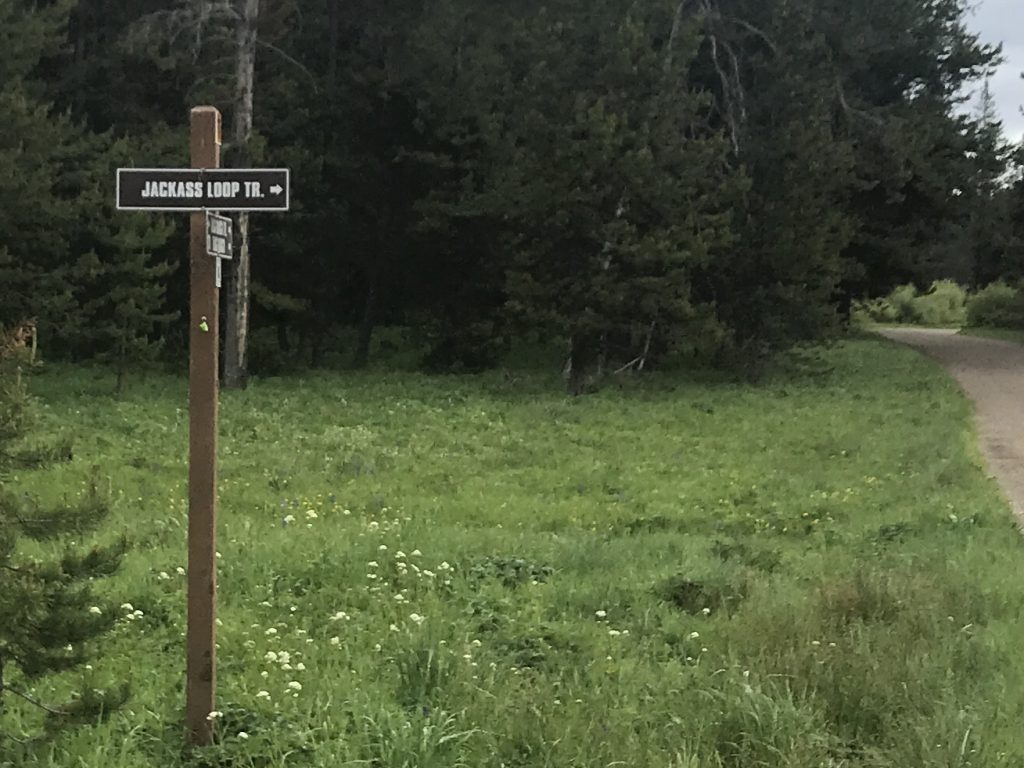 The riding is not particularly hard, but some of the hills are quite steep. Up one of them, I shift into my biggest (easiest) gear, and the shift throws the chain to the inside of the cluster, lodging it between the cassette and my spokes.

I walk to the top of the hill and eventually wrench out the chain, but I know this isn’t good. I wonder if I knocked something in my mini-crash yesterday when I landed on the drive side. The derailleur is intact and the hanger appears straight, so I hope that it’s just an adjustment issue. That said, I don’t like trying to adjust my derailleur myself, so I just decide to ride without my easiest gear. This is somewhat worrying, since both Togwotee Pass and Union Pass lie ahead, but best just take it as it comes. 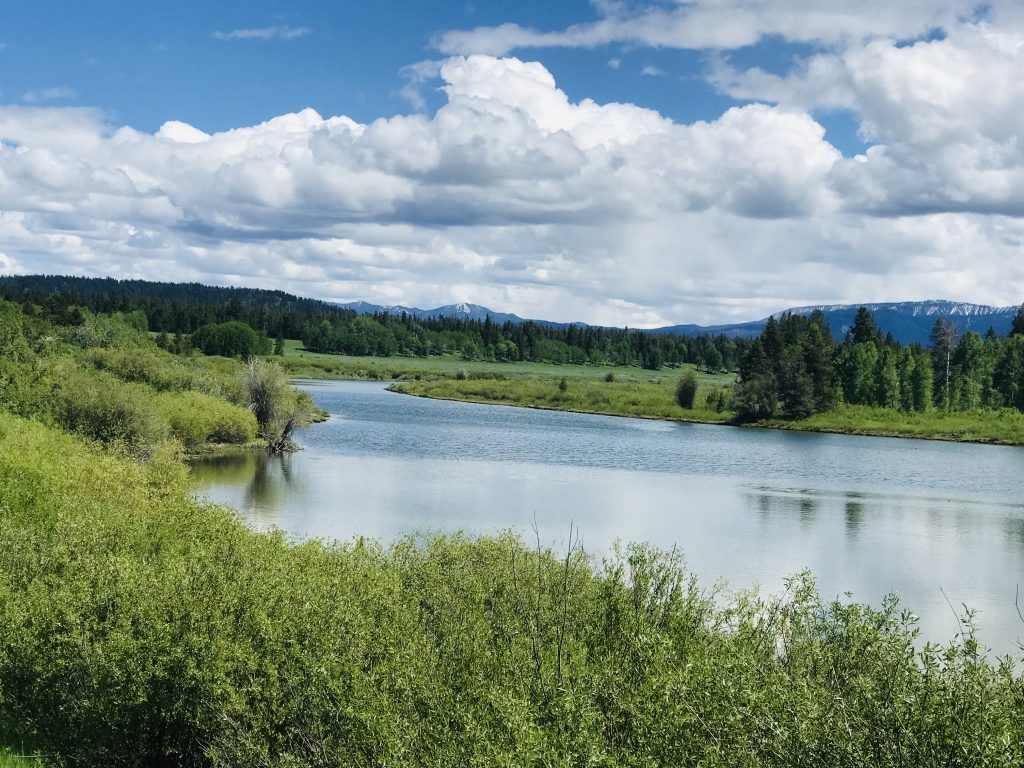 I cross the state line into Wyoming. That feels like progress. By the time I reach Flagg Ranch, the south-bound weather system is catching up. I go inside to resupply and warm up, and I meet a dot watcher who is camping nearby with his family and doing a day ride of his own. He offers to try to help me with my derailleur, so I ride with him to his campground, which is on the route. We hang my bike in a tree and as his young daughter supervises, we work on adjusting the limit screws, which are the mechanism that keeps the derailleur from moving too far in either direction.

With all the world’s diligence – but none of its expertise – we succeed in making the problem worse. By the time I leave, I’ve wasted a bunch of time and my gears are either skipping or unavailable. Ah well. Work with what you’ve got, right? I’ve had my mind stretched enough by the single-speeders I’ve been riding with to realize that this is not really the problem I might have previously thought. 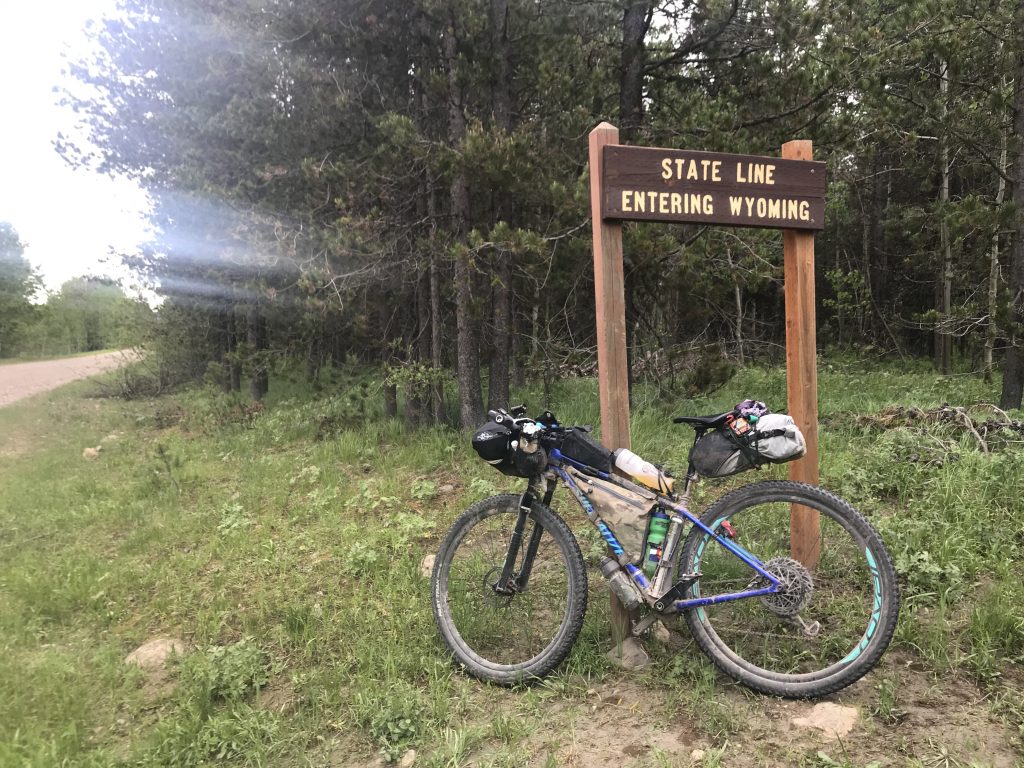 It’s starting to snow as I leave. There’s a long pavement stretch out of Yellowstone and through part of Grand Tetons. It’s not until I’m a few miles away from Flagg Ranch that I realize that the view looks familiar. For about ten miles, the Tour Divide track shares the route with the Trans Am Bike Race. It’s a popular tourist stretch, but for good reason: here the Tetons rise behind Jackson Lake with snow-topped strength and severity. It’s impossible not to stop and gawk.

This is the third time I’ve ridden this stretch of road, and each time it has been a completely different experience. In 2016, I was shivering in the early morning sunlight after sleeping in the woods in Yellowstone the night before (not recommended). In 2017, it was dark and I spent most of this stretch blowing a whistle, and then panting between blows, to warn off bears.

This time, it’s the first day of summer. And it’s snowing. I rode in a lot of cold weather this past winter in Colorado, so I’m not bothered too much physically. On a more cosmic scale, though, I am worried. Weather this tempestuous can’t mean anything good for our planet.

But. I’m not going to solve climate change today, that’s clear. When I make the left turn at the junction towards Dubois, it seems that I may have outrun the squall, as the dark clouds linger behind me. The Tour Divide route turns off the main road here, which is a welcome relief from the traffic, and climbs a back dirt road up to Togwotee Lodge, which is about halfway up Togwotee Pass. There it rejoins the Trans Am Route for the remainder of the climb on the paved road to the summit. 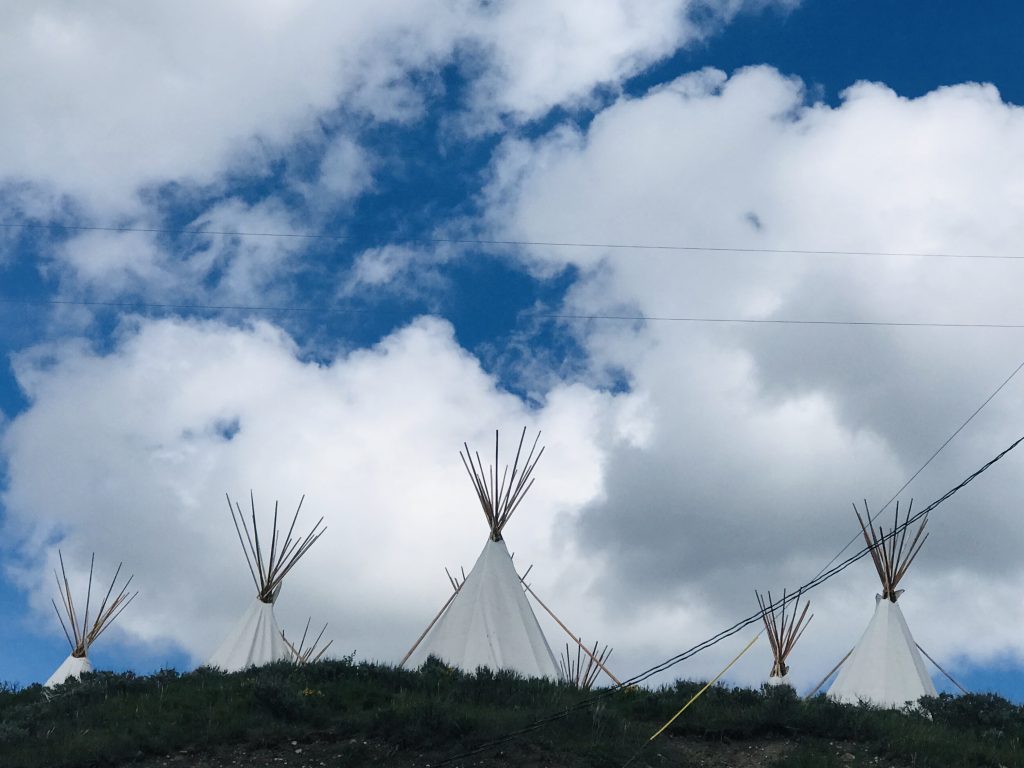 By the time I return to the paved road to complete the climb, it’s early evening. For the first time in days, and despite the missing gears and the snowstorm, I’m in a really great mood. I’m rocking out to Kreasyshawn and  I reach the summit of the climb, just as an old beat-up sedan pulls over. A bearded guy gets out of his car and asks me where I am coming from. He says he is from Ohio, and he thought he was doing good just to be up here in his car.  From the looks of his car, he is.

We’re both doing good, I say. And we are. 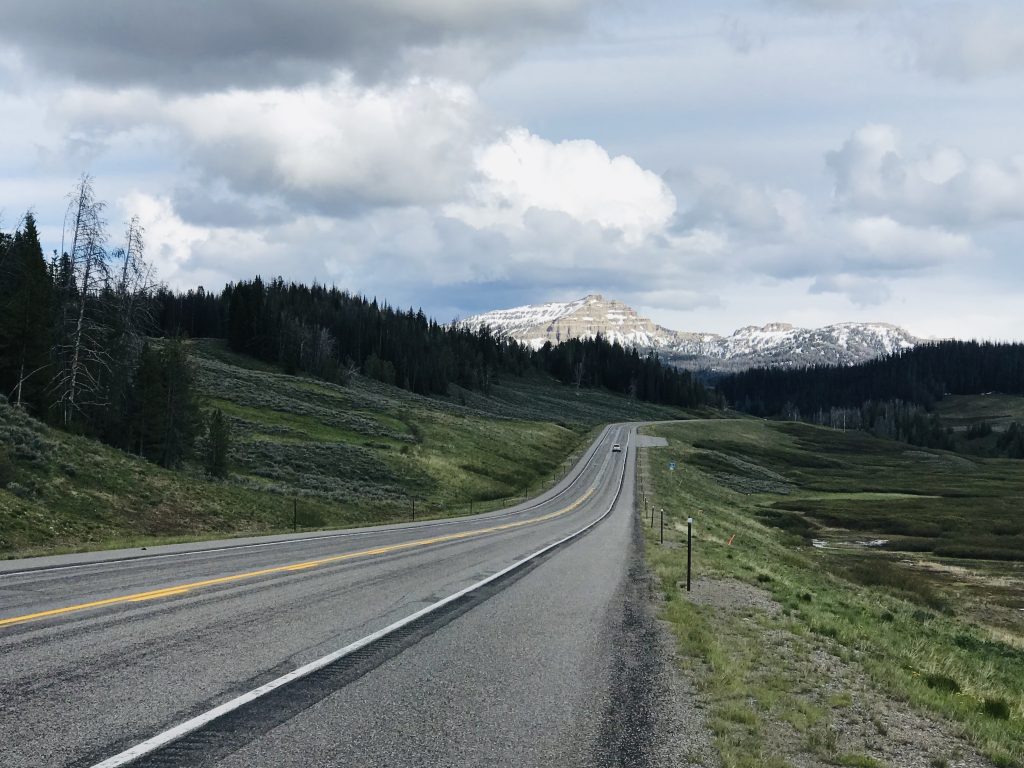 The paved road plunges down from the top of the pass into Wyoming’s beautiful Wind River range, which is where I am headed eventually. But first, the Tour Divide route sends us on a snowy, muddy road called the Brooks Lake Loop at the top of the pass. Some is ride-able, some slide-able, some I have to walk, but there have been at least 20 riders there before so there is a nice, dirty track and I don’t sink too much. 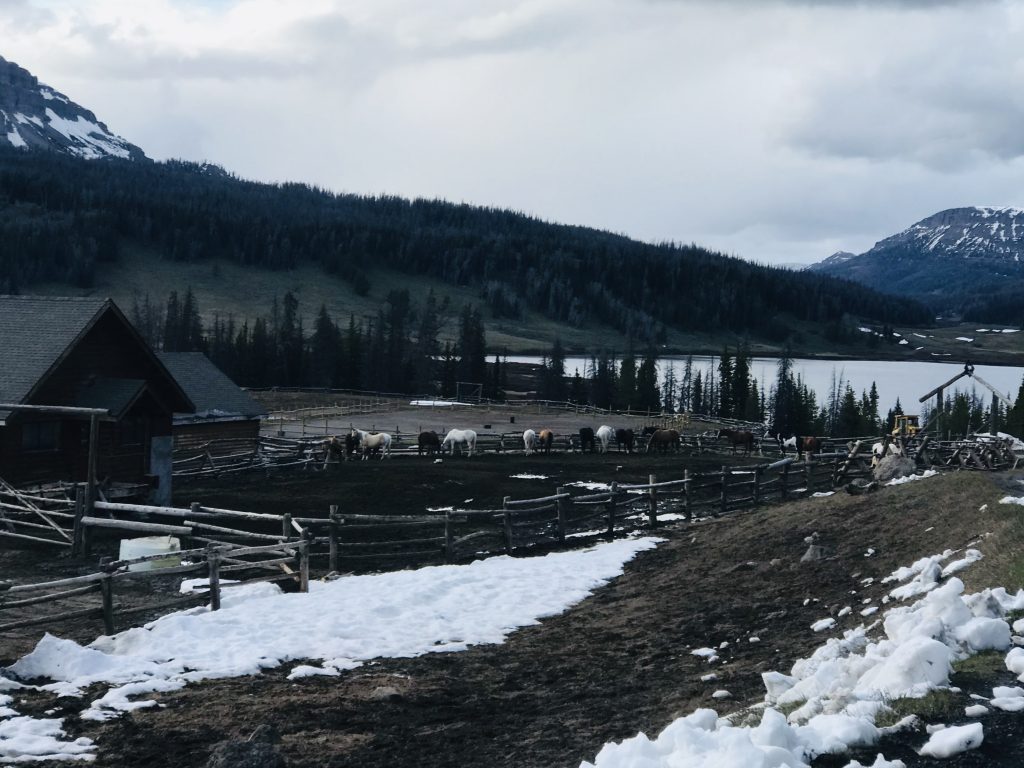 On one of the rideable sections I catch a glimpse of something red as I am whizzing downhill. I stop and hike back up. It’s a red cap, and I stuff it in my seat bag. There’s an off chance I can find its owner – and if not, I have a new hat to wear.

The sun is dropping lower as I get past the snow. It’s another beautiful sunset and I fly downhill. Lava Mountain Lodge is near the bottom of our descent, and beyond that is the tough Union Pass. The clouds are low over those mountains and it looks cold. I’m sure Beau, Ryan and Robert are headed up, going over the pass tonight. This time, though – despite the fact that I have ridden less than ten hours today –  I don’t even consider it. In fact, riding less feels good.

I find Nate at the Lava Mountain Lodge. He’s just ordered pizza and I do the same. We are joined by Peter Kraft. We drink beers and laugh and shovel in pizzas. Peter is 26 years old, from the flatlands of Florida, and this is his third Tour Divide. He has dark quiet eyes but an easy smile. In 2012 after watching the movie Ride the Divide, he talked his dad into doing the race with him – and despite a crash that sent his dad to the hospital and an illness that sent Peter to the hospital – they finished together in 2013.

Just before we head off to our rooms, I remember the hat. Hey, either one of you happen to lose a hat? I ask. Peter’s eyes widen. It turns out it’s not only his hat, but a special one at that – he’s carried it for every Tour Divide so far. He’s so appreciative that I feel like I’ve carried a talisman. Maybe, I think, it will bring a bit of good luck to me in my own journey – though I still don’t know where it’s taking me.

*Kudos to Peter, who ended up finishing this year in 17 ½ days for 12th place. I’m pretty sure it was because of the hat.