Truth number one: The Tour Divide was one of the greatest romances of my life. 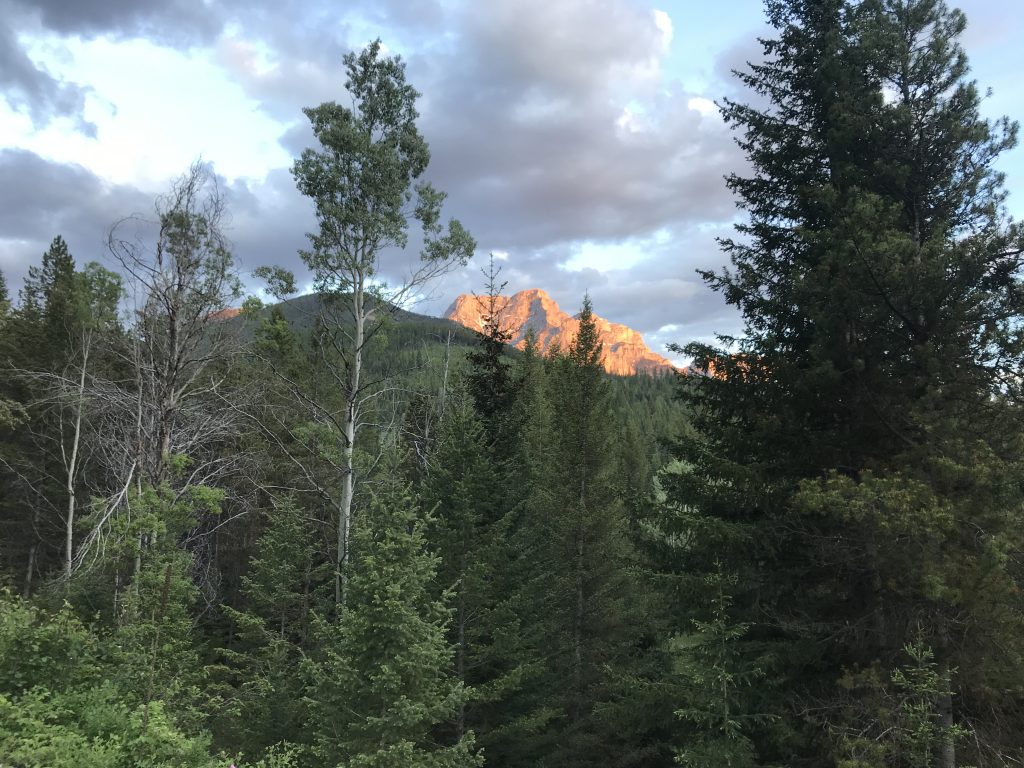 So many moments that give me shivers of pleasure: Watching the waning Canadian light at dusk turning a snowy peak from gold to pink and back to gold again. A breeze in the Idaho forest blowing gently across my muddy legs while I lay on my back, watching the clouds move across the sky. Stripping off my sweaty t-shirt and dunking it into a freezing, gushing spring in Montana. Wondering at snowflakes on the summer solstice in Wyoming. Laughing out loud next to a brand-new friend that I feel like I’ve known forever. Understanding the permanence of the Milky Way in a vast Great Basin sky.

Truth number two: The Tour Divide was a bad breakup, one that comes slowly and painfully. 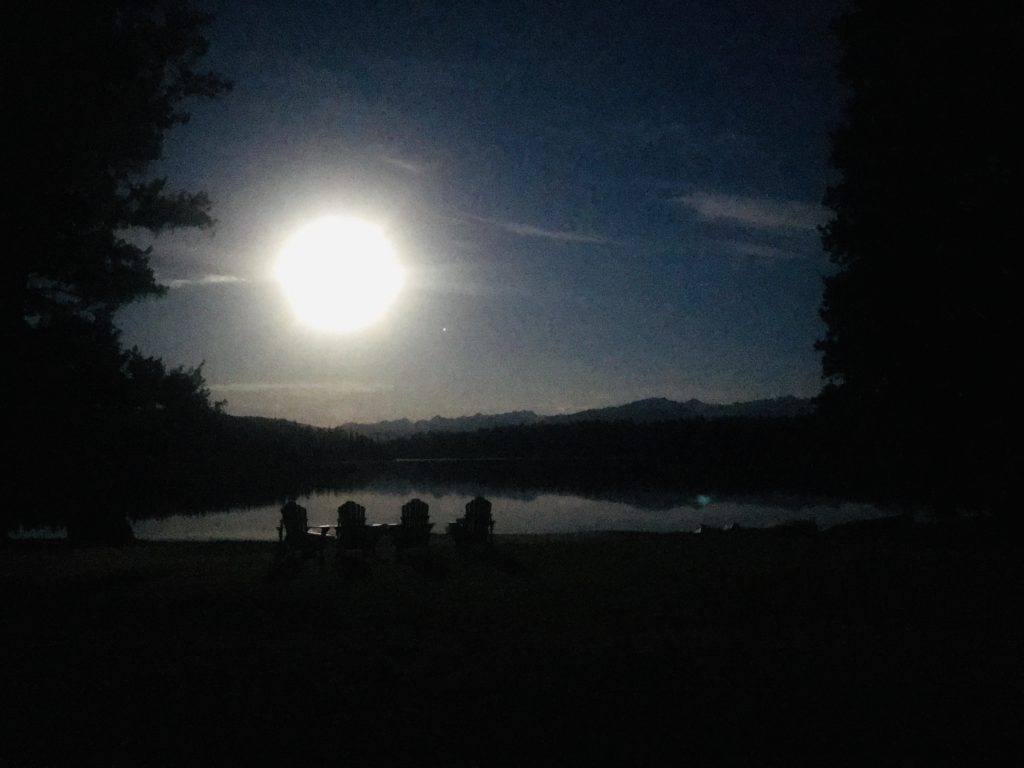 I quit my race in Steamboat Springs, Colorado, just a bit over halfway. Injury didn’t force me, and I didn’t have a race-ending mechanical. I wasn’t even sorry to stop. In trying to come to terms with what happened out there I watch a lot of emotions fighting for space: betrayal, confusion, relief, the helplessness of feeling at the mercy of something out of my control. The tug of war in the brain.

The thing I thought I wanted, out of reach and slipping away.

I am a bike racer. While I hope my identity spans beyond being an athlete, it’s also true that since I discovered ultra-bike racing a few years ago, training and racing has become a growing  and ever-more-consuming passion. I’ve spent lots of money, and even more time,  on training, racing, bike parts and gear, planning.

Since 2016 I’ve raced more than 12,000 miles on my bike – road, gravel and mountain. Two Trans Am Bike Race finishes, the BC Epic 1000k and a lot of “shorter” races (usually 12 hours+). I love the preparation process, the planning and anticipation, the camaraderie of pushing myself alongside fellow competitors, the thrill of testing myself to reach a goal.

My favorite races go somewhere. Not in a circle, but on a journey. Bikepack racing always feels like the purest form of freedom. It’s like a fast road trip, a chance to see the world at quicker than a snail’s pace but slow enough to sense my place in the world. Ticking off distance while also living like a vagabond, sleeping in ditches and catching snatches of towns and quick conversations with locals. Solo and simple, just relying on myself. Unencumbered. 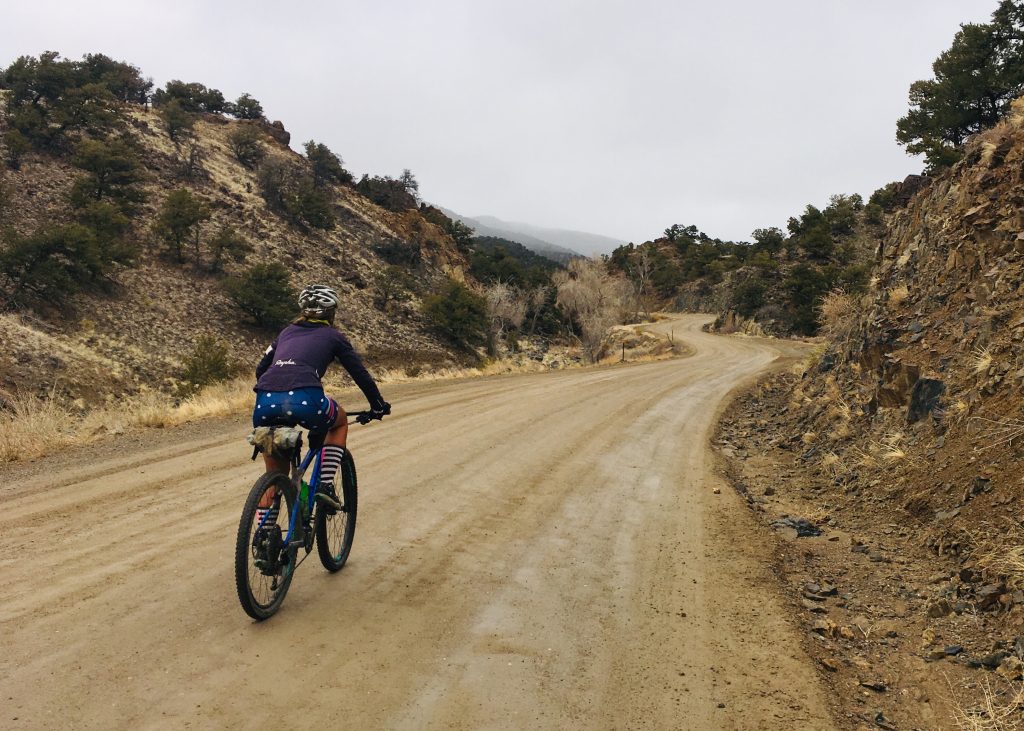 In 2018, I decided that the Tour Divide was a next logical challenge for me. It seemed like a significant, but reasonable, step up. 2700 miles of rugged, off-road riding from Canada to the Mexican border across the US. Bears, mountains, thunderstorms, dirt. Perfect.

With most of my adult years spent road riding and doing triathlons, mountain biking is relatively new to me. But six years ago, when I moved to Colorado a whole new cycling world opened up. I have spent the last few years learning to ride rough terrain, gaining skills by taking instruction and watching riders much better than me (of which there are many).

Last summer while training for the Leadville 100, I had a downhill crash on the highest, most remote point of the course, going over my handlebars in a rock garden and breaking the top of my shoulder into several pieces. I had surgery and rehabbed the shoulder, and by this winter I was in full-commitment mode.

Because I love racing against the clock, I set a big time goal for the Tour Divide. I targeted Lael Wilcox’s race finish time in 2015, which was 17 days. I knew there would be many strong female riders this year, but I wasn’t competing against others. I wanted to compete against the route, against my own best effort. A 17-day finish means averaging ~160 miles per day, on varied surfaces and lots of elevation gain. In the Trans Am in 2017, I had averaged more than 215 miles per day. That said, the two courses are far from equivalent. I knew riding that many miles on this kind of course was going to be a tough ask, but I also felt ready to set an ambitious target.

For this race, I knew I needed to not only train fitness, but also wilderness prep and mental toughness. Pushed and guided by my excellent coach Greg Grandgeorge, I rode 5,500 miles and 220,000 feet of elevation gain this year before June, the majority of it on my mountain bike. I did some big efforts, including the notorious 340-mile Iowa Wind and Rock gravel race in April, but kept the racing to a minimum. I tested gear and often rode my bike fully loaded. I rode in Utah, Arizona, Colorado on sandy, rocky, mountainous routes. I made new friends. I rode with a lot of joy, even at hours that some weeks neared those of a full-time job. 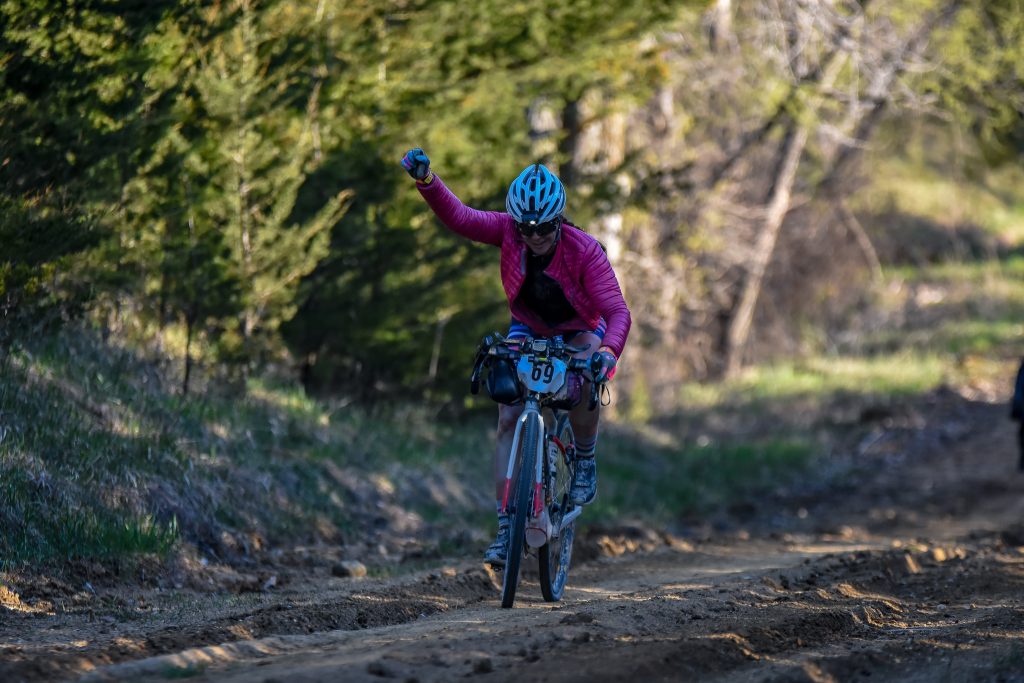 While there are always improvements to be made in training, I arrived in Banff feeling I had done the best I could with the time that I had. It was a good feeling.

On June 14, the race began. The course was stunning at every turn, far beyond my expectations. Rushing water (so much water!), mountain vistas, bears and antelope in the road, no sounds for hours but sounds of my breathing and the the crush of wheels on gravel. 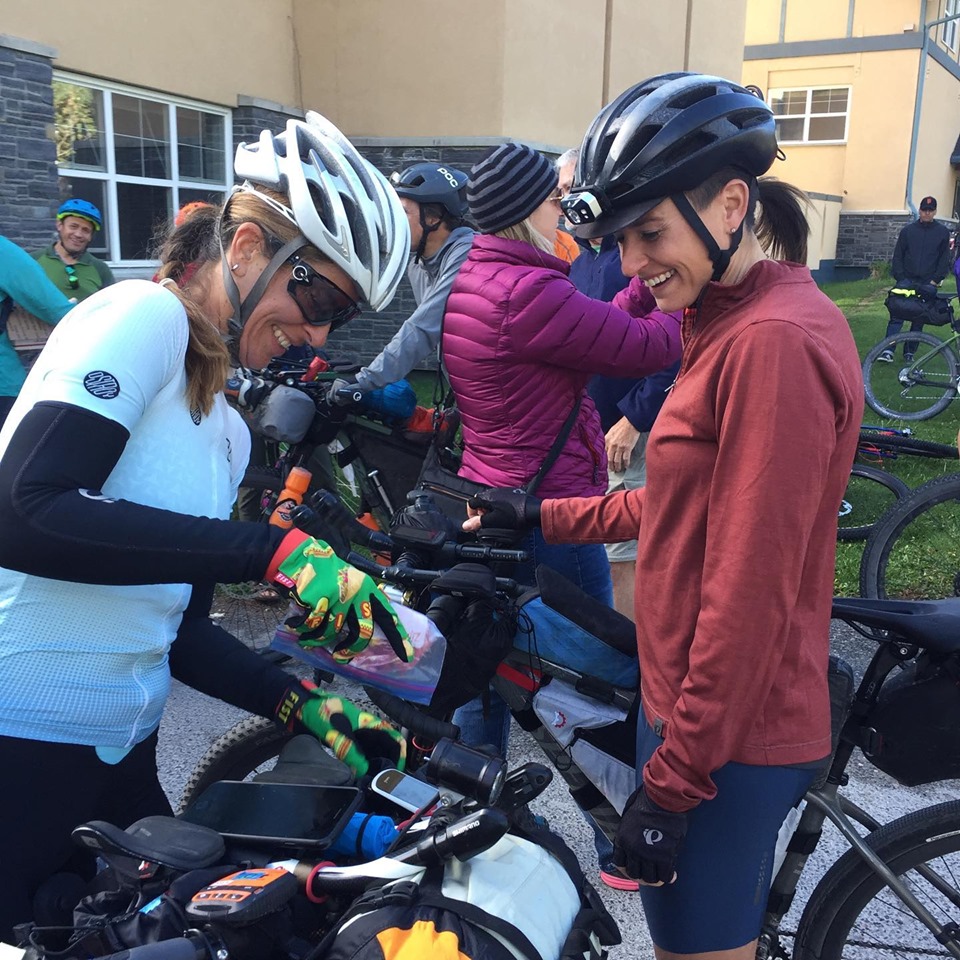 My fellow racers, when I encountered them, were from all over the world, with great perspectives and good stories. The route was rugged, but doable. Many parts were challenging, but none were overwhelming. My body was in good shape, and I felt positive about my fitness.

But something was very wrong inside my head. Almost from day one, I didn’t want to race. I don’t know how to describe it very well beyond that. My legs were working, but my mind wouldn’t play along. I wasn’t interested in logging the big miles, in maximizing time, in being efficient – all things it takes to achieve the goal I was after.

For several days – through BC, Montana, into Idaho, Wyoming – I didn’t believe what I was feeling, and I continued to collect the miles anyway. I told myself to be more grateful, that I just needed time to get into a rhythm. I would force the sleep out of my eyes and start riding at 4am. I rushed through convenience store stops, politely cut short conversations with locals, kept a keen eye on my elapsed time to my riding time.

Contrary to previous experiences, it was a terrible feeling. I was logging the miles, but I didn’t want to. I rode in a headspace of shock and confusion. I love racing, and I had come there to race. But something in my brain continued to refuse to embrace it.

Eventually, after nine days, I gave in. I stopped and waited in Pinedale for my husband Jimmy, who was racing his own race. We rode together across the Great Basin of Wyoming and into Colorado. We chased a black-sky storm and slept under the stars. We stopped early one day and drank margaritas in the town of Wamsutter, hated by most Tour Divide racers but thoroughly enjoyed by us. 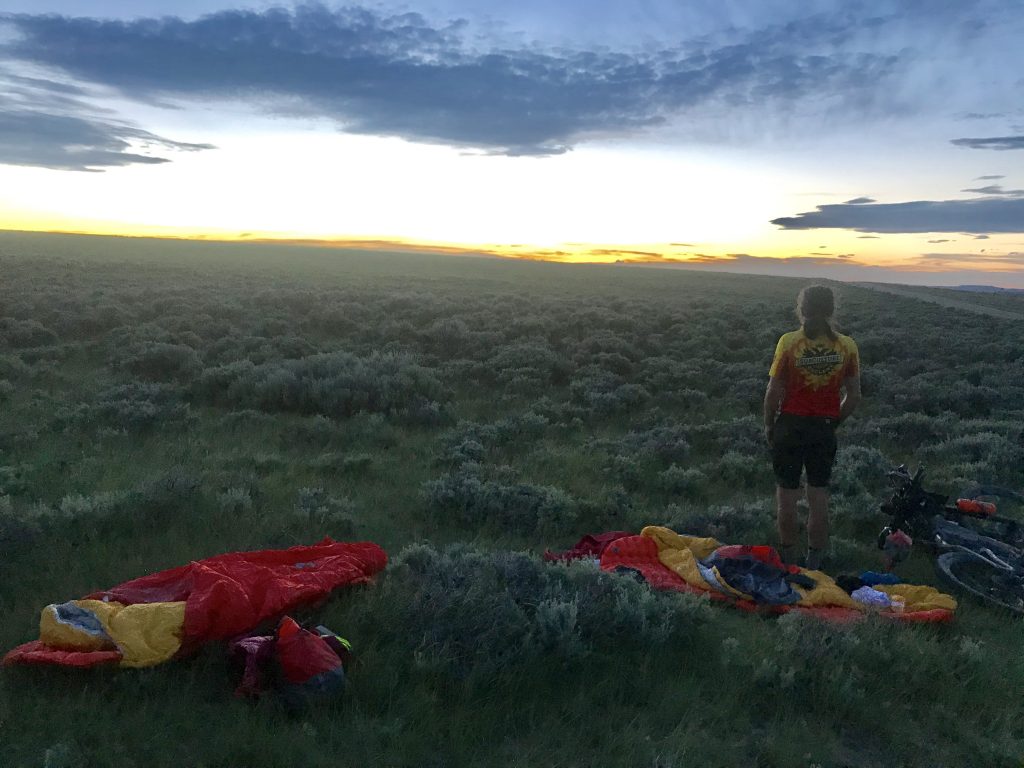 Finally, I was having fun. Still, though, I was mentally exhausted, and Jimmy was still setting a strong pace of 100+ miles per day. When I found myself curled up on the bathroom floor in Steamboat Springs for a night, suffering from food poisoning, it felt like an easy choice to pull the plug, despite knowing that I could have waited, recovered, and gotten back on the trail if I chose. As the wheels literally came off my bike, I felt nothing but relief. Then the follow up: guilt, for feeling glad.

In retrospect, and writing this, it seems a mental lapse to not have been either able to suck it up one way or the other: either to control my fickle mind well enough to focus on the initial goal, or to more quickly adapt and adjust to the signals my brain was sending me to do something different, like simply enjoy myself.

Rather, I stayed in a strange purgatory space of emotional doughboy for a while. We spend so much time and effort practicing mental toughness, forcing the brain to think positively, to not identify with hard times or with weakness. This too shall pass. Finish what you start. Push through to the end. Grit, resilience. These are our highest values. 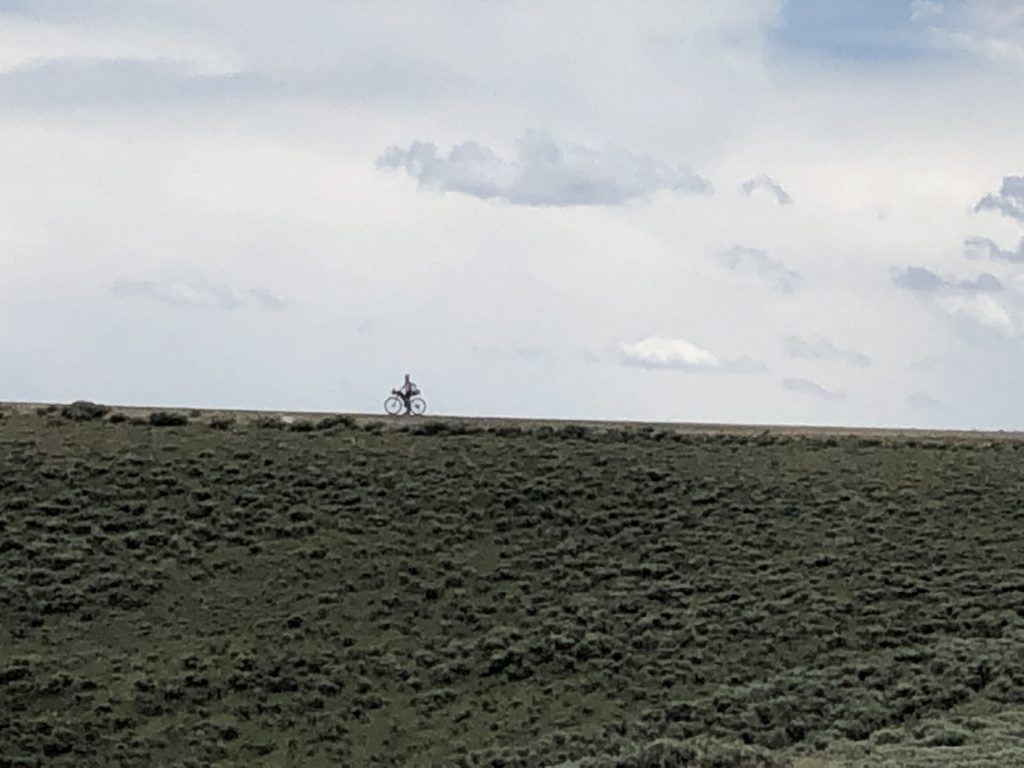 Until they’re not. Now having quit the race and being a week removed, the whole thing remains confusing and a little sad. It’s hard to explain what happened without sounding like I think I was a victim to something out of my control. Or to sound ungrateful and like a maniacal overthinker; after all, in the end we’re simply out there to have a good time and ride our bikes across this beautiful country.

But this is my journey and this is my adult lesson: Contradictory (even opposite) things are often true at once. And feeling betrayed by our own minds probably always means an opportunity to take a lesson, to reflect on what we think we want, and what we believe it takes to get there. At the heart of it I believe I was gifted an opportunity – albeit a confusing, painful one – to reflect on something more complicated than racing, maybe something at odds with getting from Point A to Point B as quickly as possible.

I don’t know exactly what it is, but I think in time it will become clear.

My husband, Jimmy (who is completing his awesome race as I am writing this), said to me when we met up during the race, “I have to admit that I have kind of wanted you to have an epiphany. I just wanted it to happen after the race.”

But I guess that’s what an epiphany is. A moment of truth that occurs where we least expect it. The only question is whether we stop to pay attention. And what a blessing to be able to learn these lessons on the road – harsh, beautiful, rutted, and full of wrong turns as they are.

Following this post I plan to reflect on each of my 15 days on the Tour Divide. I hope that sharing these hold lessons for someone. If nothing else, look at the photos. The route is magical, and every day was an adventure.

Maybe at the end of the day, just a good, old-fashioned love story. 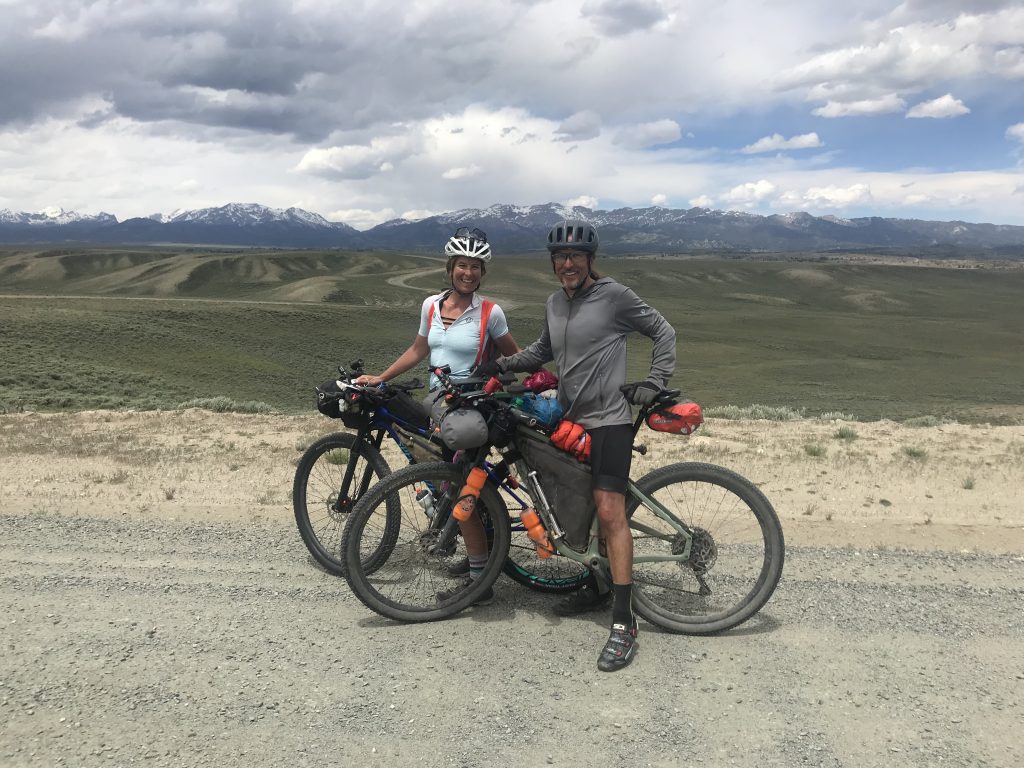